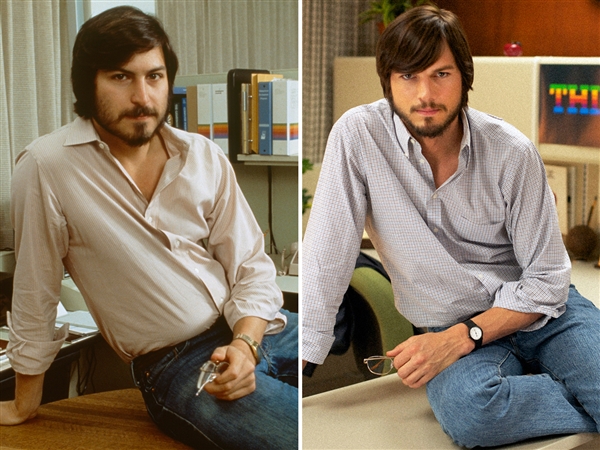 It's like looking into a great big dumb mirror. Would you buy
a used computer from either of these two jerks?

I want to make a movie about someone famous. I didn't know them personally, but they're really famous, so people should be interested.

I don't know much about them, either, and what I don't know about the transformative moments of their lives is probably pretty important in telling the story of their lives, but I'm not interested in finding out what they were or telling an audience about what made them tick.

I think if I get someone that looks a lot like the person whose biopic this is, then I should be okay. If we get them to do a couple of famous mannerisms, then audiences won't care that they're not doing anything interesting or revealing or watching a good movie.

Since this biopic is set in the 70s and 80s, mostly, I'll just blare lots of golden oldies during those scenes, in case the sluggards and dullards in the audience have no idea. I'll spend more on the soundtrack than I will on the script.

All in all, I'll tell a story that has no more depth or meaning than one of the ads used to advertise some of the products this person was responsible for, but I won't even make it that good.

Ladies and Gentlemen, I give you Jobs.

Rare is the good biopic. Rarer still is the biopic that actually leaves you knowing less about the subject after watching it than you did before watching it. I thought I knew a bunch of stuff about Steve Jobs before, but the pointless banality of this flick squeezed that little knowledge I had out of my head. The omissions and elisions here are staggering. I know that the art of storytelling in films is dependent on covering as much ground as you can in the least amount of time, but the people structuring this flick seemed to deliberately miss the point of why people even know who Jobs was and what he might have done to warrant being so well known.

This isn't a case of a film starting off well and then falling apart. It starts woefully and ends up progressively getting worse as it goes along, in an almost comical fashion.

Steve Jobs (Ashton Kutcher) speaks to a group of young people in what looks like a lecture theatre. He speaks, and they drink in his every words. This is late in his career, and, as we know, he's not long for this world, but he's still got a lot to do before he gets there.

What he's talking about, as these people gaze adoringly at him, is not just the iPod. He's not talking about technical specs, or practical considerations. He talks passionately about just what a product of his is capable of. He's not some guy that started a computer hardware company just to make products. He's making magical stuff that can touch people's hearts and transform the world.

Whenever he does this, the strings swell up, the piano goes into triumphant, peaking melodies, and we're all meant to stand up and applaud like the trained seals in the audience. But this is the start of the flick.

In short, what the ding dang? But this is followed in short order by a montage. Montages are an art form in themselves, but the purpose of this montage completely eluded me and had me laughing in a way I don't think was intended.

At this stage Jobs is a semi-college dropout, and someone gives him some acid, and he trips balls, standing up like a stoned Jesus in a wheat field, interspersed with scenes of trekking in India, hanging out with the lowly people who would one day be operating the call centres for his company's products. But this is five-ten minutes into the film, and you're dropping a ludicrous montage on us all ready?

He works at Atari, and his co-workers and manager hate him, mostly because he stinks and walks around barefoot, but also because he's a rude and entitled jerk. His manager gives him a project, and Jobs, as would happen for the rest of his life, gets his good mate Steve Wozniak (Josh Gad) to do the actual work, and then takes credit for it.

This gives him the idea that he could keep ripping off other people's genius and make not only a career out of it but one of the most profitable companies on the planet. He poaches Wozniak from Hewlett Packard, and a bunch of other guys, and the rest of them start building computers in a garage, as he abuses the people around him and yells at people on the phone, in the pursuit of capital funding.

Look, it'll come as no surprise to you that they eventually get to produce a working computer that private chumps, schools and mental hospitals buy in droves, despite it being a fairly substandard product. The whole world, and their potential competitors, keep telling them that no-one will ever want their own computer in their home; what would be the point?

But Jobs has a Vision! A chicken in every pot, a car in every garage, and one of his computers in every home. No-one else apparently shares this vision or understands it, but enough people smell money, so eventually he gets his way.

I can't tell you if these early scenes work or not. They're probably the scenes that feel the most real in the whole flick. They're mostly inaccurate, from what many of the people involved, the ones who were there, say who've seen the script or watched the flick. The person who comes off the best out of these scenes is Steve Wozniak/Josh Gad, who comes across not only as a highly adept and skilled individual, but as the compassionate ying to Jobs's obnoxious and untalented yang.

I'm aware that the last sentence sounds a bit scuzzy, but he's meant to be the heart and soul of the company. Jobs comes off as a titanic jerk. From plenty of commentary, multiple articles and biographies, it appears that Jobs was a colossal jerk, and so I have no reason to dispute this.

What the flick comprehensively fails to do is explain, or even get close to getting a feel for any of the following: why was Jobs such a jerk? What role did his jerkiness play in the corporate boardroom dramas and such, as opposed to there being genuine disputes over differences of informed opinion? How did he still manage to achieve so much, even though he was such a jerk? Why did he refuse to acknowledge paternity of his first child for so long? Who was he beyond the empty, corporate PR and marketing bullshit that he spouted throughout the flick even in private conversations? After failing so badly at so many things, how was he able to transmute that failure into success when he went back to the company in 1996?

The main reason I ask the last question is because once the situation becomes untenable for him at Apple and they give him the boot, he cries a bit, twelve years pass, and then they ask for him to come back, with barely a mention of what he did during that time in the wilderness. Also, once back at Apple, he seems to be the same jerk he was before, spouting the same bullshit rhetoric, getting revenge on whoever he thought screwed him over, essentially, not having changed one bit.

But the world had changed, we were now ready to appreciate his 'genius', apparently, and that was the only difference. And plus now he'd found 'better' people to design his overpriced, made by Chinese slave labourers crap, and emphasises again and again, that the consumers who would come to worship his company’s products are a screaming mass for whom he had nothing but contempt.

I’m actually making it sound like it has more depth than it actually possesses by criticising it like this: it’s an empty exercise. As my partner said, with disgust, when it finished, “that was nothing but fluff.”

Fluff would have been something, at least. Fluff has substance, however little. I don’t think this really did. Even if Kutcher’s performance, or appearance, is uncannily similar at some points, at no point did I ever feel like he captured the essence of the man, or that he was anyone other than Ashton Kutcher straining for credibility.

He’s still Ashton Kutcher. He’s as believable as Steve Jobs as he would be playing Mozart.

--
“Here’s to the crazy ones. The misfits. The rebels. The trouble-makers. The round pegs in the square holes. The ones who see things differently…they change things. They push the human race forward. And while some may see them as the crazy ones, we see genius.” – the whole goddamn movie sounds like a substandard Apple ad - Jobs