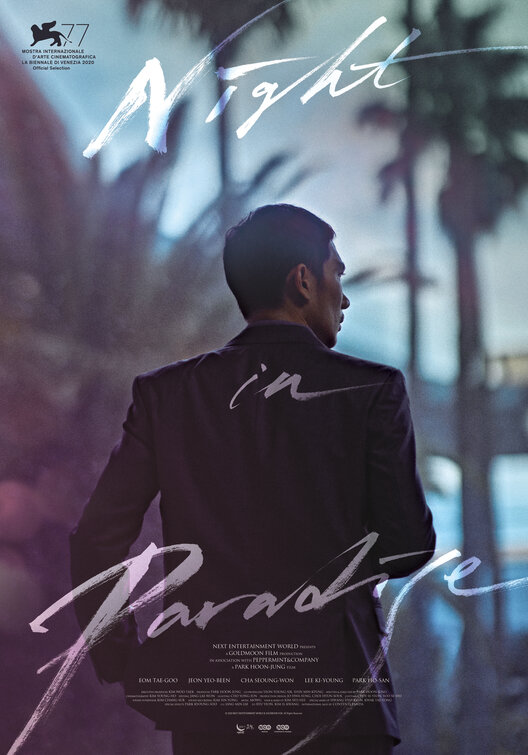 I wonder if there will be smoking and drinking in Paradise?

Ah, the blessings of Netflix be upon you. I had heard about this film recently, and, wouldn’t you know it, it was on my local streaming service, so I watched it when I found a spare 2 hours and 15 minutes to myself, which are admittedly hard to come by these days.

So I watched it, and, well, now you have to suffer too.

Not that it’s bad, it’s just that, when you hear about it, you think it will be a certain way, and then when you watch it, it turns out to be something completely else. And that’s okay, that’s just a difference in expectation versus what you actually get.

I didn’t have any particular high or low expectations, but perhaps I had some preconceived ideas based on other South Korean films I’ve seen over the years.

And no, this is nothing like Parasite, in case you were wondering, a film that won Oscars and that people have almost completely forgotten about due to… well you know.

This was also clearly made some time in 2020, because there are some people with masks, and references to social distancing, but other than that it doesn’t play much part in the story.

Now, I don’t pretend to be an expert on South Korean films, culture, politics, history or crime, but I’m telling you this for free – this flick in its manner of telling a story about a young gangster is indistinguishable for any other number of flicks I’ve seen about young yakuza, young triads or any other jerks in organised crime set in other countries. The setting and the window dressing are different, but, really, the specificity of the location belies the fact that this could have been told universally.

Tae-gu (Park Tae-goo) is a loyal gangster in his gangster clan. He is respected and admired and all that crap, but, most importantly, he is feared by the jerks in the opposite clan called the Bukseong, who tried to recruit him, which he regretfully declines.

After a meeting with those rivals, Tae-gu gets to spend a few brief moments with his sister, who is unwell, and his niece, who’s cute as a button. And it’s her birthday!

Despite being a cold emotionless robot in all his work dealings, Tae-gu loves his sister and his niece. He gives her an expensive present, and waves like an idiot (though not as idiotically as one of his fellow henchmen) as they drive off.

His sister is ailing, and in need of a transplant of some sort, but he is not a suitable donor. What’s to be done?

Well, fate takes that particular problem out of his hands. A fatal car accident kills his sister and niece, and Tae-gu is somehow convinced that it was the Bukseong trying to kill him.

He kills their chairman, or at least tries to, and then has to flee. His boss, Chairman Doh (Park Ho-san) organises to get him to Jeju Island, 60 kilometres south of the mainland, with the plan being to smuggle him into Russia or something.

Russia? They specifically mention Vladivostok. That’s how serious they are about getting him out of town.

And, after all this, the actual title page / opening credits appear: Night in Paradise.

I don’t know why it’s called Night in Paradise. Jeju Island might in fact be a paradise, but it’s not obvious from any of the scenes I witnessed. It’s an island. There’s land, trees and water surrounding it. None of this matters to Tae-gu, not yet. And he’s there for like a week, so why isn’t it Week in Paradise, eh?

Even after the death of his sister and niece, Tae-gu doesn’t really express much of anything. He is sent to a guy called Kuto who lives the quiet rural life with his niece Jae-yeon (Jeon Yeo-been), but of course instead of it just being a safe place where Tae-gu can lie low for a few days, shit has to eventually go crazy.

There is a lot of violence in the film, there’s no doubt about that, but mostly the film is just about a bored and grieving Tae-gu sitting around smoking and drinking. I have smoked and drunk a lot in my life, a lot. I was never young and thin like Tae-gu, but I smoked and drank a whole heap. No-one thought to film me doing it, though, and the world is worse off for the lack of that footage.

The niece herself has some mysterious disease that only seems to exist in movies, which will soon kill her, but there is some mysterious surgery they could do in the States that could save her. The fact that her death feels imminent means she has a lack of fucks to give about anything. She, too, smokes and drinks a lot.

So there is a lot of footage of Jae-yeon and Tae-gu smoking and drinking a lot. They don’t have intense and philosophical conversations about life, death, meaning or art. They don’t have much of a relationship at all. This isn’t a romantic story in the slightest. At one point she does tell Tae-gu that if he wants to have a go, she’d let him, because her death wish means she doesn’t care what happens to her.

Pretty hot dialogue if you ask me. He turns her down, telling her she’s not his type anyway, appalled by her arrogance in assuming his sexual interest.

So if this constitutes the majority of the film, these two hanging out, eventually having the local specialty dish together of mullhoe, which sounds fucking terrible, what is the point of the flick? The deepening relationship between them? Two different damaged people connecting before their respective ends?

I have no idea. I have an assumption that it probably resonated more with Korean audiences but I guess that’s just an assumption on my part, which is pretty close to worthless. I think if you like looking at two depressed young attractive people spending time together and having abrupt and insulting conversations with each other, this is the film for you!

It feels like, despite how the flick starts, and the world that it conjures, of legions of guys in suits fighting gangland wars with knives, like a better drama than it is a crime film. The action in it is way too infrequent and spaced out, so it almost lets you forget it’s not a drama and oh yeah these people need to kill each other in order to be happy. It’s surprising when the violence comes out of nowhere.

An early scene shows Jae-yeon using a gun quite adeptly, so what one could reasonably wonder is whether you’d bother showing someone with serious gunfighter skills and then not have her kill a whole bunch of people later on. Fret not, she’s going to kill a lot of people before the end, even though it’s not “her” story to tell or end.

I don’t think it’s much of an actor’s showcase, but maybe there are many subtle things about the flat acting that I’m missing. The stand out, because he does the most acting, as opposed to the best acting, is the new leader of the Bukseong clan, Chairman Ma (Cha Seung-won). Ma has one of those faces and manners that convince you that the guy surely is the thing he’s portraying. Kinda like when you watch a Scorcese flick or some of The Sopranos episodes where you think “some of these guys can’t not be the thing they’re pretending to be here, what else could they possibly do with their lives?”

Ma has the surly and caustic manner of the nastiest gangster leader crime boss that you could possibly imagine, and his contempt for the Chairman of Tae-gu’s clan could not be funnier or more dripping with loathing. He is the funniest character in the whole film, but that’s not saying much, since it’s a decidedly grim film.

Chairman Ma absolutely wants only one thing – the death of Tae-gu, but he is not without honour. He is a man of his word, and at a certain point, as Tae-gu’s options start shrinking to zero before he even knows the fix is in, he makes a promise to Tae-gu that he intends to keep. In a story this grim I guess that his word counts for something.

This being a South Korean film, there is an abundance of scenes with people being stabbed with knives. Tae-gu gets stabbed at least 847 times. It’s not for the squeamish, but it’s also not a flick for people hoping for a happy ending. It’s the same thing I’d advise someone about to watch a version of Hamlet – absolutely everyone will die by the end. It’s a general statement you can make about everyone, but it especially is applicable here. In something so suffused with pointless death, there are slivers of light, I guess, but overall, well, I wonder why anyone would want to spend any time, let alone a Night, in Paradise.

--
“You’re disgusting, get on the other side of the seat, keep your social distance” – masterpiece pandemic cinema - Night in Paradise