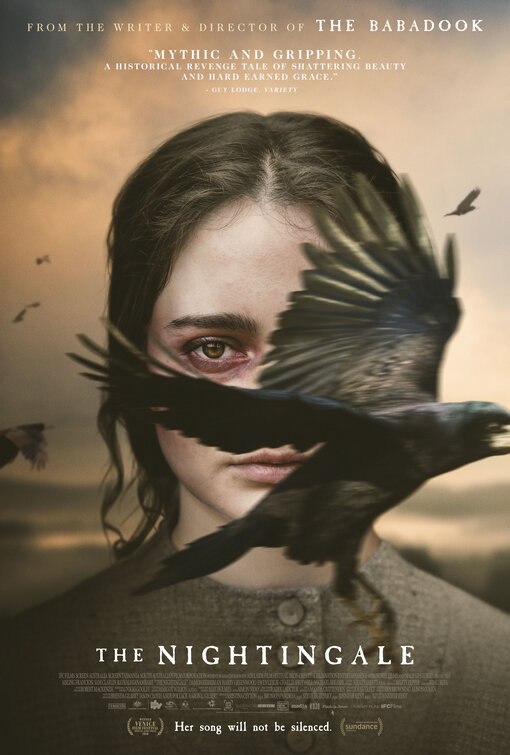 She doesn't look happy. Maybe some more revenge will do the trick

Some films are almost too brutal. I thought Jennifer Kent’s first film The Babadook was too disturbing, too discomforting, but then I didn’t reckon with Jennifer Kent making a film set in 1800s Van Diemen’s Land, or Tasmania as we know it now.

There have been a few films set on that hallowed isle from an age ago, and they all tend to be beyond horrible in their depictions of what colonialism does to people. A film of the same name as what it used to be called focused on the actions of Alexander Pearce and a bunch of other convicts, only one of which survived. Cinematically, those days don’t get a good rap at all, by acknowledgement, for two main reasons: the brutality of the penal colonies, like Port Arthur and Macquarie Harbour, and the complete extermination of the indigenous population.

The Nightingale is set in the middle of all this frontier / manifest destiny bullshit. Colonisation has been going on for over 30 years, and the brutality of the Brits towards convicts and former convicts is only slightly less horrible than their brutality towards the indigenous. Whole families, whole tribes have already been murdered with the open approval of the authorities, because they want it to happen, only quicker. But in this flick, “white” lives are pretty much as worthless in an environment where anyone with a gun or a knife can do whatever the fuck they want as long as they’re not aboriginal.

And especially if they’re not a young Irish woman, recently transported, recently released but kept in legal limbo by an awful, sadistic monster who also happens to be a lieutenant in the British army, being Lieut. Hawkins (Sam Claflin). Sam Claflin has played a smug piece of shit in a whole bunch of movies, including the Hunger Games ones, and I’m sure every other film he’s ever done and every film he’s ever in, in the future (if they ever make films again during these virus-dominated times), and here they use his smarmiest features to play just one of the most horrible people I’ve ever seen on screen. He plays such an appalling character here that I’m amazed he signed up for this voluntarily without wondering what it would do for his future employability. I wouldn’t hire him to paint a fence let alone play some decent person ever again.

It’s a role devoid of humanity, or anything other than an overwhelming belief in one’s own superiority to all.

Look, I would generally not talk about a story in such a way, because it’s beyond spoiling plots or story beats and such, but this is a brutal and sadistic film that, in the first half hour, has the same character of Clare raped multiple times, her baby and husband murdered in front of her (and us, as viewers), and people need to know this kind of stuff because I’m certain there’s a bunch of people who would consider themselves mature, thoughtful fans of broad ranges of cinematic experiences who would read what I’ve just written and say “fuck that for a game of soldiers, I’m not going to watch shit like that.”

And the awfulness and sadism and inhumanity doesn’t stop there.

Stuff like that happens in many movies, to varying degrees, for different reasons. Sometimes it’s to justify the actions of the surviving characters. Sometimes, in the nastiest films, it’s done because it’s done, where the victims don’t get justice or revenge, and all it shows is that people are capable of the most dire awfulness. As if we didn’t know.

The Nightingale has Clare (Aisling Franciosi) want to get revenge on Hawkins and the other soldiers who abused her and murdered her family. There is no legal concept of justice at such a time. There is no authority that could intercede on her or anyone else’s behalf, because it’s the authorities who have destroyed her life with their casual cruelty.

No-one, surely, could blame her. We saw what happened. Whatever morality you could possibly subscribe to would argue anyone short of a saint or a Dalai Lama could forgive this crap. And furthermore, every brutality they visit upon Clare and her family they keep committing all over the countryside, to anyone they meet.

Surely, SURELY these fuckers must be ended. But Clare is a former convict with no legal document that indicates she is a free woman. She is, and I hesitate to use the word because of all the connotations it brings, seen as a runaway slave. And, she’s a woman. She’s an Irish woman in a place where neither are respected, where nothing is respected. It’s a precarious existence.

And she is trying to hunt down a group of soldiers across an inhospitable landscape that she doesn’t know. She threatens / hires a tracker into helping her find the brutes, and she keeps a rifle trained on him for a long time, worried that he might, in her words “eat her in the middle of the night.”

Billy (Baykali Ganambarr) is a good tracker who initially rejected the soldiers when they came his way on the path to Launceston (Hawkins and his scum followers race there because he feels he’s raped and murdered enough people to have earned himself a promotion). But in Clare, because she doesn’t give a shit any more, he finds someone willing to pay extra.

Clare often speaks in Gaelic, Billy, who tells her his name is actually Mangana, being the Palawa kani word for “blackbird”, often speaks his own tongue when he’s not expressing his rage towards and incomprehension of the sheer magnitude of English cruelty towards his people. Clare never tells him why she pursues the soldiers, but eventually she doesn’t need to, when he sees what she does to one of the men who killed her baby.

If what was done to Clare and her family was awful, what she does to one of the soldiers who they catch only because Hawkins can’t stop himself raping and killing people along the way, is appalling, even when we think we’re on her side. It’s a level of ugliness calculated to deny us the satisfaction that can usually be felt when someone righteous gets revenge on those who deserve it. The director is too dedicated to telling the story she wants to allow us a glimmer of vicarious satisfaction.

Clare finds herself even more distraught than before, surrounded by an indifferent and ancient wilderness, sometimes with trees around her that predate white settlement by centuries, out of which people of either culture pop out and wish her harm.

Billy, too, with more reasons than most to hate the colonisers, is still horrified by what he sees Clare do. He at least can draw comfort from the country they pass through, unlike Clare. Though they bond over their mutual loathing of the English, he is afraid of her, because her bloodthirstiness seems like a sickness, like an invitation to the bad spirits he fears around.

Reflected in the country they move through, reflected in Clare’s worsening nightmares at night, Billy thinks a smoking ceremony will help her, not only to catch up to her tormentors, but to not be consumed by her hatred. Wouldn’t you know it, the ceremony seems to help, and Billy and Clare start to interact less as people afraid of each other for what each represents, and more as two people united in their shared trauma.

It’s a relationship which strikes the right note. This is not a cross-cultural Bonnie and Clyde, or Queen and Slim. They are people with no hope and no chance of redemption in society, of being heard and taken seriously, nor do they really have that much hope of succeeding in Clare’s objective: there’s no reason beyond luck that she’ll be able to kill the ones she wants to kill.

Maybe there’s another way. She strives to find, once the story shifts to Launceston, a way of declaring both what Hawkins is responsible for to his peers, but also that she will not be beholden to his abuse or his callous indifference. To neither enslave herself again or allow Hawkins to think he still owns her, in any way.

It might seem like there’s going to be a strange end to the story, the very essence of anti-catharsis, but, when Billy / Mangana is given some terrible information about his people, the ending becomes somewhat more expected, somewhat more conventional, perhaps somewhat more necessary.

And then we can rest, as can Clare and Billy, we hope.

I don’t know if it’s exactly the story Jennifer Kent wanted to tell, but it seemed like she didn’t have to compromise a single shot or edit in the whole thing. It’s an exhausting odyssey, and it’s probably beyond a lot of people’s capacity to accept for such a brutalising length of time. The performances, by Aisling Franciosi and especially Baykali Ganambarr, are phenomenal. A lot of other people in the flick just have to stand there looking starved and dirty, or be abused / murdered, or both, but those central performances stand out. I shudder at the thought of complimenting Claflin or Damon Herriman as his lickspittle subordinate on their performances, because the mere thought of their characters or what they looked like fills me with revulsion.

I know they were just acting but I don’t care. The Nightingale is such a brutal representation of the story of the colonisation of this fraught country that it should be played on every television channel all day long every January 26th, but even then certain people would take the wrong message from it, like “women shouldn’t have gotten to vote” or “ we really were too kind to the First Nations people that had the temerity to be here before us.” The use of landscape shots or the natural beauty of the wilderness down there never distracts enough or make the experience anything less than harrowing throughout.

The Nightingale. One Irish woman and an indigenous man fight against British colonialism. Hilarity does not ensue.

8 times I wondered whether the film would ever end, but the impact of colonialism never ends, does it out of 10