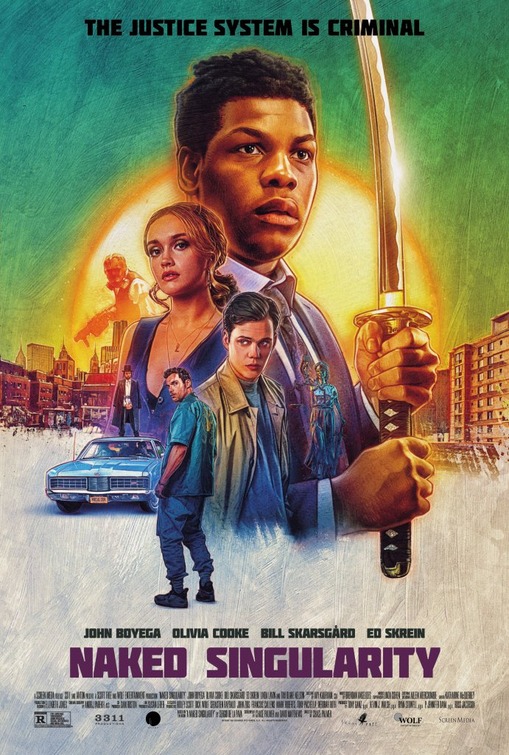 Just to reassure you, there's no nakedness in the flick, which
is a shame for John Boyega fans, but he's definitely singular

This film was actually made. I cannot believe it. Few books have ever looked less likely to end up as movies.

When I first heard A Naked Singularity by Sergio De La Pava was going to be made into a movie starring John Boyega, I thought, no fucking way. I should probably phrase that a bit more elegantly – I thought – that sounds unlikely.

This isn’t to brag, but I’ve read the book, and it was quite a memorable book. It is also a massive fucking book. It’s 864 pages. It’s the kind of book you would use to kill a giant Galapagos tortoise with if you really needed to, for whatever reason. One of the most memorable, mainly because it had so little to do with anything else that happened in the story, sections was the feverish writing about boxer Wilfred Benitez. People in the boxer’s life, who like him, probably never will write as much about him as Sergio De La Pava did.

It was insane, the book was insane. He didn’t just throw in the kitchen sink, he threw in thousands of kitchen sinks, of all different shapes, sizes and qualities. Since it was initially self-published, there was no editor to tell him not to put in every single thing he’d ever thought of and written down.

I read it at a time when it seemed important to read these massive American novels because reading is like lifting weights, as in, if you’re not reading hefty tomes like Infinite Jest or The Recognitions or Mason & Dixon, or Underworld or Atlas Shrugged, do you even read, bro? Now I can happily let these monstrosities slide by me, because perversely I don’t have as much time to read books working from home.

For the screenplay here they’ve lifted the bare bones of the plot from two things: Casi’s work as a public defender in New York, which are soul-crushing excerpts and absurd experiences from the life of the author himself who’s done the job, and a surreal crime heist plot that came across as something fantastical even within the confines of the book.

Also, the protagonist of the book, I’m pretty sure, had been rendered completely insane. The protagonist of the film, ably played by John Boyega as a somehow still idealistic lawyer fighting for the rights of people the legal system is designed to crush, is not anywhere near as insane as the one in the book. Much of the book has an air of unreality, in that unlikely or impossible things happen, and we’re not entirely sure whether the protagonist is just hallucinating them. For most of the book I was convinced that Casi’s friend / fiend Dane (played in the film by Bill Skarsgard) was a Tyler Durdan alter ego delusion of Casi’s, a shadow self who followed Casi’s urges in directions he couldn’t consciously allow himself to go.

There’s none of that high falutin’ crap here. There’s Casi, there’s Dane, there’s an ex-con called Leah (Olivia Cooke) who works at the Dept of Motor Vehicles, there’s a bunch of salty crims, and there’s a massive stash of heroin that everyone wants, including the Mexican cartels and a crime organization run by Hasidic Jews, headed by The Gollum (Kyle Mooney).

I mean, that perhaps sounds insane on paper, but that is so reduced, so minimal compared to the maximalist insanity of the novel. In the book the fear induced by an almost mythical Mexican enforcer called Ballena, or The Whale, is such that his very massive presence is enough to warp space and time around him. I guess that sounds a bit like a “yo mama” joke.

Here he’s just a big guy with a bald head who gets in the way of people, and he works for Craig (Ed Skrein), who somehow is both a main antagonist but also a pawn at the same time.

The problem with taking all the bits out of the story that made it so unique, propulsive and surreal is that you’re left with a heist that isn’t that interesting but takes up the second half of the film, and a first half that has various elements and themes, but it doesn’t really lend itself to the important socioeconomic justice themes from the first bit. Casi presumably is a decent lawyer, but all his attempts to get some modicum of fairness for his clients, or to help them, are rebuffed because he keeps appearing in front of the same judge (Linda Lavin) who clearly hates him. The arbitrary ability to decide against Casi despite and sometimes because of the merits of his legal arguments means it’s not just the poverty and powerlessness of his clients that determines the outcome.

That would make for a fairly depressing working life, if your every case went poorly and you never get a reasonable outcome for a client. Doing that for years would grind your soul down, and maybe the cognitive dissonance of talking about justice all the time but rarely if ever achieving it would be enough to make you go crazy.

That’s certainly how it seemed in the book, which is a gateway into allowing for the craziness of that to lead both to insane nattering on about singularities and the universe collapsing in on itself, and television characters appearing in real life with an unlikely sounding heist in order to never have to work as a public defender ever again. As a film it makes as much sense as an Ocean’s Eleven sequel where half the film is about the unfairness of agricultural policies towards farmers and then having the protagonists steal a bunch of wheat in order to never have to bake bread again.

Maybe that was a poor analogy. Maybe there’s no “maybe” about it.

As any reader should know, having a character in a film called Leah is dangerous, because it’s a name that conveys such greatness, such mysteriousness and complexity, stunning yet lethal beauty, decisiveness and ambivalence, steely resolve and infinite resilience and the ability to fall apart at a moment’s notice. I don’t know that this character called Leah in this flick lives up to all those expectations, but she tries, god love her, she tries.

She is probably the character that we should be barracking for the most because she, like many of the people Casi tries and fails to look after, is in this precarious position because she doesn’t have the options that money would bring. When the option, kinda at gunpoint, comes to make some money and get out or away from this kind of life, she goes for it. It’s less about greed, and more about wanting to have a say, wanting to be able to materially change the circumstances of one’s own life for the better, a freedom which few of the other characters are afforded.

Truth is, almost every single criminal in human history could probably say they were motivated by the same reasoning.

Casi’s “friend” Dane is the polar opposite of him, in that he is a lawyer with zero conscience who is beyond maliciousness, beyond cynicism, and probably a monster on a par with the mythical gangsters that people this world. In the book Dane planned every aspect of the heist which was infinitely more complex than what happens here, and basically almost forced Casi into participating. Casi here requires far less arm twisting in order to get to the same place, going from reluctant to enthusiastic in about 15 seconds.

I haven’t and probably won’t expend much time on the Angus character (played by Tim Blake Nelson) who lives downstairs from Casi, or is his landlord, not sure. It’s from him that some of the book’s precious cosmic nuttiness comes from, and, for once in my life, I felt like I would have enjoyed hearing more of his stoned musings on the LIGO gravitational wave observatory or the imminent collapse of reality.

The film still works well enough, perhaps too well. Maybe it needed to be less lean and more messy to be more memorable. It’s a lean 90 or so minutes, and maybe if it’d been more of a drama and less of a crime / heist movie there would have been more of a chance for the relationships to develop.

That’s okay, though. Boyega is great as this character, somehow being the only honest lawyer in all of New York but willing to be sneaky in order to help other people out. Skarsgard, for once, isn’t playing a killer clown or a dog crucifying lunatic, and he’s pretty funny as a bad conscience demon on Casi’s shoulder. It’s funny to me that a film set in New York has all these characters, even the villain Craig who murders women for fun and keeps threatening Leah, which made me want him to die painfully; not one of the main characters is played by an American. They’re all Brits! Well, not Bill, but he’s a fucking Swede anyway. But honestly, are these all acting jobs Americans are unwilling to do?

The book ended on a profoundly ambiguous note, but the film doesn’t, and I think this ending is more appropriate to this version of the story, because the book’s ending transposed to the film would probably make audiences howl with rage and throw up with tears of confusion.

The truth is I cannot imagine the audience for this movie, and I looked and saw that the movie literally made about $3000 at the box office. I mean, even allowing for the virus keeping most sane people out of cinemas, that’s a tiny amount of money. That’s brutal. Hopefully it’ll find a home on streaming services somewhere, because otherwise, ouch. John Boyega deserves better than that.

Still, I guess it’s still a good thing the flick was actually made(?) It amused me for an hour and a half at least.

7 times if there’s a sequel, it should star Leah, and it involves her killing jerks with the same samurai sword, or living well, which is apparently the best revenge out of 10

--
“I know this is going to sound weird but this kind of love is almost too intense. It hurts a bit. It feels almost like loss.” - Naked Singularity