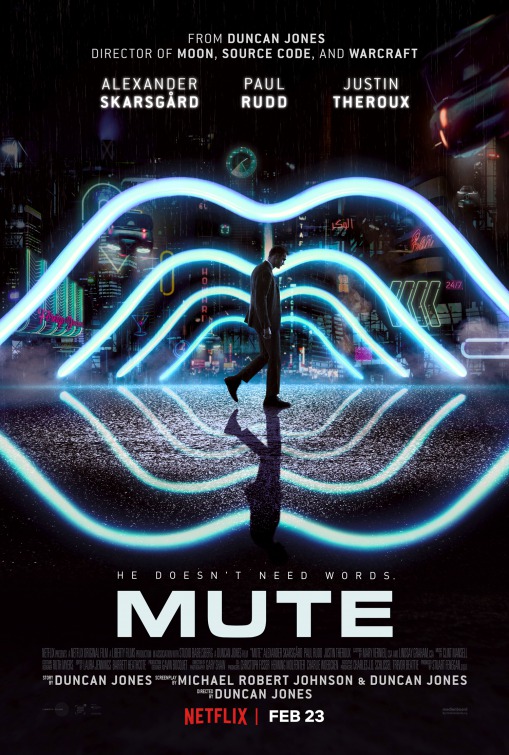 See, it's a giant neon mouth, and he can't talk. Makes you
think, huh.

I’m trying to find nice things to say about Mute, and I can’t. I really wanted to like it, I was excited when I heard Duncan Jones had a flick coming out, and when I heard the premise for this, but, having endured this weird smorgasbord of shiteness, which just kept going on and on far longer than it deserved to, I actually come away from the experience feeling cheated and disgruntled.

It’s not like I paid to watch it, well, not like I paid extra beyond my monthly Netflix subscription. This falls under the somewhat interesting banner of movies actually “made” by Netflix, not just a movie that Netflix overpaid for first screening rights. Of the three “Netflix Exclusives!!!” that I recall seeing over the last year, this is by far – BY FAR – the worst.

The problem here, just to be a glib smartarse, is that it is terrible, which is a shame, because the central performance, despite being ill-conceived, is actually all right. Good, yet baffling.

Alexander Skarsgaad has nothing to be ashamed about here. He is, in fact, practically the only good thing in the whole grating experience. And that isn’t enough, I’m sad to say, because the other stuff is so fucking awful.

For the longest time it’s been like I’ve been reluctant to ever really give a flick a critical bollocking, or that when I watch something truly terrible I don’t even bother reviewing it because it’s like rubbing salt into my own wounds getting me to waste even more of my precious time. But some movies stand out in their singular awfulness, and need time and attention paid to them in order to try to stop them happening again.

It’s not like I had to do much investigating to find out several things about this movie, since I gladly and gratefully follow Duncan Jones on Twitter, and he (personally) alerted me to the fact that a) this was a labour of love of his based on the very first idea he had for a movie, predating the most excellent Moon and the other stuff he’s made. Then he made some cryptic remarks, references to sly Easter eggs and such. And then, after it was released on Netflix, the tweets kinda dried up after a few people tweet-congratulated him for getting it made.

And then. Silence. Blissful silence. The silence that comes from people no longer saying anything about it out of deeply felt embarrassment.

The opening scene is pretty horrific: A kid floats in water, having just been chopped up by a boat’s propeller. His throat and chest have been gruesomely cut, and there aren’t enough bandaids in the world to fix what ails him.

On top of that, the poor boy seems to be afflicted with stupid parents, who, being Amish, somehow forego brain-use by declaring, somehow, that whilst they’ll tolerate the fact that the doctors used their ‘witchcraft’ to suture Leo up, they won’t let the surgeon surge on to repair the damage to his voice box, like that’s even a thing.

But then, if Leo’s parents that we never see again had done the right thing (and let’s be honest, it’s stupid and arbitrary anyway, they’re just there to make him a mute almost deliberately), the film would have been called Talking Guy.

The film jumps forward thirty years for reasons that don’t matter, into a cheap version of the future that looks vaguely Blade Runnerish on a budget but set in a Berlin depopulated by German people. It seems like it’s mostly populated by clones and oddballs. Leo (now played by Alexander Skarsgård, son of legendary Swedish actor Stellan Skarsgård) is a mute who works bar, and he has a really hot girlfriend with blue hair because it’s the future (Seyneb Saleh), and that’s that. Naadirah finds her relationship with Leo frustrating because a) he can’t talk and b) he’s afraid of technology and such, and beyond being mute, doesn’t really seem to have anything else going for him other than whittling.

Now, I’m not going to mock whittling. It’s a valid skill, very handy, and I never knock anything handy. And since Leo is an Amish guy who doesn’t like using mobiles or even looking at TVs, he seems like he’s a nice guy out of time and even more out of place in a futuristic futurish future-type place. The thing is, though, nothing that happens in the flick even really needs a futuristic setting. The time and place don’t add a jot to the dumb plot, such as it is. Not being able to talk only really plays a part in the story insofar as it makes it harder for Leo to ask questions of people, because it’s a mystery, not a science fiction film beyond the superficial trappings.

Leo works bar, serving drinks. Naadirah is a cocktail waitress, and, it’s implied, having awful things done to her on the side for money. Leo does woodwork. You could set this at any time in the last three hundred years. Of course then you wouldn’t have poorly constructed stripper-bots or even more baroquely constructed sexbots to look at for a few moments and then look away kinda embarrassed.

Once Naadirah is missing, we now have Paul Rudd’s terrible amazing handlebar moustache to look at, and Justin Theroux’s terrible wig and horripilating performance to look at as Bill (I refuse to call him Cactus – It’s way too stupid) and Duck, two Americans in Berlin there for no reason better than anyone else is in the story. It’s not clear initially why we have to spend time with these appalling people, but it becomes progressively clear that they have something to do with Naadirah’s disappearance.

So the mystery… isn’t really a mystery. It’s not only that we find out pretty quickly who did what, it’s just that there have to be a lot of seemingly random (but just poorly thought out) breadcrumbs for Leo to follow from dead end to dead end before he, too, finds out what happened to poor Naadirah.

Classic detective story that we all know and love. Except done way more boring, and with very random stabs at portraying what a really inert version of Berlin’s future is going to be like. Fifty or a hundred years in the future, people will have hair dye, they’ll fight with their exes, they’ll hit people with blocks of wood, they’ll drink, there will be strange creeps who let even stranger creeps babysit their daughters in brothels, and then they’ll let their paedophile best buddy hang out with their daughter because why not. That is the future we have to look forward to.

When she goes missing, after saying seven or eight times that she doesn’t deserve a tall blonde hunky mute for a boyfriend, Leo stumbles around Berlin pointing a picture of Naadirah to all and sundry, none of whom know where she is, and, even better, the photo isn’t even of her. This goes on for way too long. It’s hard to say how long this farce should have gone on for, for best results, but all I can say is that I feel like it should have been about 100% less. None of Leo’s investigation is interesting. Seriously, it just kinda happens without interest or engagement, and you’re left thinking “Why am I watching this again? Oh yeah, because Masochism.”

Nowhere that Leo goes is that interesting. Nothing that Leo does or sees is interesting. If there were interesting things in the movie at one stage, they surely have been edited out by someone who seems to have a grudge against both the director and the audience.

This cannot be what it is, but the whole thing comes across as a first draft filled with amateur actors acting for the first time. Paul Rudd seems to be adamant that people see him as something more, someone capable of more than just playing a good-natured doofus, which is like 90% of his work. So here he tries to be menacing, threatening, compelling. What he achieves is being the guy you move away from on public transport when he stands too close to you.

Justin Theroux hasn’t exactly had a stellar cinematic career, the high point of which was probably Mulholland Drive a million years ago, and seems to be also trying to show people that he can do more than just play whatever the hell it is that he generally plays (I have no idea who or what he is other than the guy married to Jennifer Aniston).

Based on his singularly gut-churning performance here, I can see why Aniston elected to divorce him recently.

Congrats, Justin. You had one job, and you fucked it up royal. You made her watch this staggeringly bad performance / movie, and now look what happened.

To say that the flick is staggeringly misconceived, deeply misogynist and unpleasant to watch would leave out all the other dumb reasons why watching this flick, which probably doesn’t sound that different from heaps of other crap, is even worse than it sounds like. The Duck character, yeesh. Okay, so he’s a horrible, horrible creep who sleazes onto and over anyone within earshot and arm’s reach, especially children, but because he flirts coquettishly with Bill, he gets a free pass, until Bill discovers cameras in their underground butcher’s block / unlicensed surgery, which he uses to film the kids upon whom he installs prosthetic limbs(?) Did I get that right? So Bill goes mad and threatens him, then forgets about it despite the fact that THAT’S what he’s been doing right from the start, and that there’s no reason to trust him other than the flick requires it.

And yeah, by the way, can you look after my daughter for a while? – says Bill to this horrible puddle of sick, and virtually every other low life in Berlin except for Leo, who’s the only not-completely-horrible adult in the whole enchilada.

Still, Leo’s not the sharpest scalpel in the surgeon’s bag. He’s not much of a detective, he seems like a nice chap, in that he’s so protective of Naadirah before she disappears that he routinely gets into fights defending her honour, to the detriment of his job. His search for her is nonsensical because, just to spoil everything, none of the clues he follows lead anywhere, and the only worthwhile tips he gets are given to him by Duck for … reasons that make no sense. None whatsoever, other than a lousy script that has dumb reasons for why things might happen.

I fear, as well, that maybe maybe Skarsgård should have heeded the Robert Downey Jnr character’s advice from Tropic Thunder, and not gone full retard. Never go full retard, is the sage actor’s advice, because that doesn’t get you the shiny gold statues.

The ending. Is not good either. It’s a mess, but it’s not out of alignment with the sweaty tone and floundering nature of everything that’s gone on before. I have seen Skarsgård in one worse movie, and that was the epically bad Tarzan that came out a couple of years ago, and still, like I’m saying, it’s not his fault. He should walk manfully away from this okay.

As will the rest of us, like the survivors of a bus crash. This is bad. Don’t watch it. Even if Alexander Skarsgård looks like your first boyfriend in high school, this is not a watchable flick by any measure.

2 reasons in which he’s not even a mute in the end, fer crying out loud and for the dumbest reason ever imaginable out of 10

--
“Are you going to give me some trouble, big boy, or are you going to channel that famous Amish serenity?” – if you think it will help, maybe give it a try - Mute