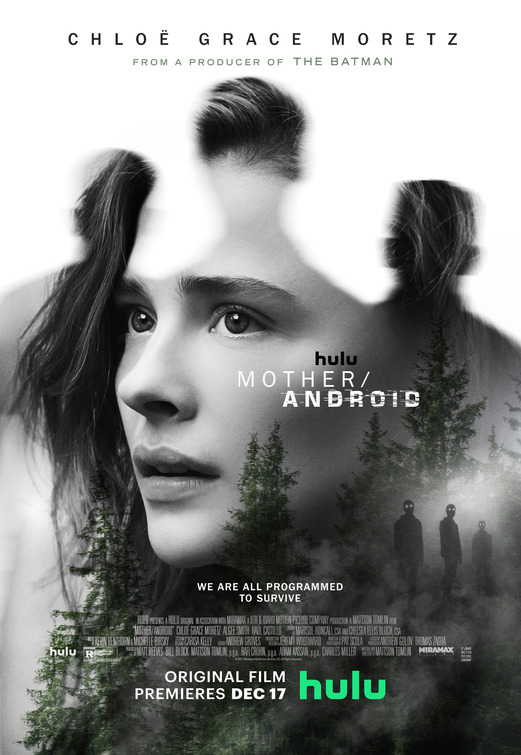 No, your mother is an android, not mine! And she
recharges slowly!

Not a very auspicious start to my reviewing of films released in this latest, possibly dumbest of years?

After all, I voluntarily watched a flick that looked pretty dire, and the only reason was the release date in Netflix said ‘2022’, and I wanted something as recent as recent could be.

Otherwise I doubt I would have bothered with this.

It is the Apocalypse. AGAIN. This time it’s robots. We swing around, every now and then, and eventually the spinning wheel brings up ‘all technology eventually will rise up to kill us.”

So not zombies this week, not monsters, not plants, not vampires, not aliens: robots that look like people, so, androids, hence the baffling title.

The film starts with a woman lamenting that she left someone behind. Then it jumps back in time, where the same woman is looking at three pregnancy tests, all positive.

There was déjà vu for me, here. The character is played by Chloë Grace Moritz, who I previously saw in another actiony flick, a weird mishmash WWII monster on a plane flick Shadow In The Cloud from a couple of years back, who also is desperately trying to save a baby while fighting gravity, monsters and misogyny.

Same premise, different enemy. What, former child Grace Moritz actor, out of her teens, is constantly being cast as a mama bear now because she’s outlived her usefulness as a teen ingénue? Christ, Hollywood’s throwing them on the used-by heap earlier and earlier these days.

Her character, Georgia, looking at the pregnancy tests, doesn’t seem thrilled. Wait till she finds out the world’s about to end. She is not alone in looking at the tests. In the bathroom with her (ew) is her boyfriend Sam (Algee Smith). He makes all the requisite noises of support, like “I will totally support whatever your decision is, I’m here for you, I just want what’s best for you, I’ll look after you and the baby” and these words disgust Georgia. She didn’t even know if she likes Sam that much.

But then, as they’re leaving Georgia’s parents place, some weird jerk says “Happy Halloween”, and Sam says to him “It’s Christmas”, and the weird guy looks even weirder before saying “Sorry, sir.”

Yes, I guess everyone has robot slaves these days that look like humans but serve drinks and canapés and stuff.

Before I go on with that, I just want to backtrack, because I saw this flick with absolutely no substances in my system, and yet something in this intro absolutely bamboozled me. When Georgia and Sam are in the bathroom, looking like their collective future has been ruined not by their refusal to use birth control or protection, but because she somehow magically got pregnant, there’s three tests she’s taken. After they argue a bit, she takes one of her socks off, drops the three tests into the sock, and then throws the sock on the floor.

What…what the absolute fuck? In a film filled with baffling decisions, this one, this one is the utter most baffling of all. I mean, I know the character doesn’t know the world is about to collapse in a few minutes, but how does putting 3 plastic pregnancy tests in a sock and throwing them on the floor of your mother’s bathroom DO ANYTHING to hide the tests? Like, couldn’t you have done almost anything else and it would have worked better? Thrown them out the window, tried to unsuccessfully flush them down the toilet, take the sock to the trash and empty them there, set fire to them, just, literally anything?

I wouldn’t say that moment convinced me the whole film would be shit, but let’s say it didn’t bode well.

And what proceeds is pretty much what you would expect. Robots go berserk and start killing everyone for no reason we can discern. Why you would build robots that have the capacity to kill people at will is a bit of a mystery, but it’s a premise, not an explanation, that people are after.

Pretty soon Georgia and Sam are camping in the wilderness, and she’s nine months pregnant. Shit happens fast when society has collapsed because of a robot rampage. They are trying to get to Boston, because they’ve heard that some people are able to get to Korea by boat.

Now, that’s a plan(?). They never say South or North Korea, just ‘Korea’. Do the two great nations reunify because of the threat of their robot overlords? If the world is overrun by robots, why is it just the States that’s a wasteland, and not Asia? Surely there’s no way these robots were manufactured in America: like iPhones, foot massagers and jet skis they’re all made by slave labour across the Asian continent, so is it just that all these dumb but evil robots were made in Asia, but they couldn’t afford to have them as house slaves, so all of them got exported to the States?

What about Australia? Surely none of us could afford them either. Maybe it’s a parable for how overconsumption dooms Americans alone but will leave the rest of us okay, as long as we’re not as aspirational?

Maybe I’ve already put more thought into than the makers here did. Georgia and Sam don’t have a great dynamic. She constantly thinks he’s trying to ditch her, that he’s staying with her out of obligation, that measures he would take to protect her to his own disadvantage are because he wants her and the baby to be someone else’s problem.

The fact that we are given no evidence for this in anything Sam does or says, in fact the complete opposite, points to the one aspect of the flick that isn’t beholden to the (boring, tired, derivative) sci fi premise: a mother-to-be’s fears about whether she’s ready to be a mother, and whether her partner, the father, will be a decent parent, are universal. We can relate to those aspects, generally.

It’s harder to relate to here, because for reasons I can’t really fathom, beyond that the screenwriter really wants to get back at someone for doubting whether he’d make an okay dad or not (it’s okay, buddy, we’ve all been there, and some of us have even lived up or down to their expectations), and really wants to call someone a bitch without calling them a bitch (instead using the groan-worthy trope of “hormonal” in its place).

Yes, I understand becoming a mum can be stressful, but in the middle of a robot apocalypse, would you really be saying “I think maybe we should see other people” when you’re on the run for your life?

I think there are parts of the story the film handles adequately, and there are parts it handles less well, and mostly it’s because there isn’t that level of care or cinematic artistry at play. You can point to other flicks with bigger or smaller budgets that have handled similar, if not exact same stories, in a much more compelling fashion. This really just comes off as a very minor re-do of A Quiet Place, with half the budget and a quarter of the attention to detail.

In the middle of a desperate race through the forest, as Sam and Georgia stream ahead on a trail bike, and Georgia takes shots at some robots chasing them with a revolver, I couldn’t help but think “damn, they didn’t have many ideas, and they’ve already run out of them”.

The story shifts, from there, into a realm I can only refer to as Shyamalanesque, except not even that level of inept, because the twist is so obvious it barely constitutes a twist. I don’t want to spoil it, because it’s almost the only interesting thing that happens in the film, even though when it happens you’re like “yeah, none of that made any sense”. But it does build up to resolution that is surprisingly committed to delivering a strong ending to a weak film, which is not a combination you often see. It’s a strong ending, because even if it doesn’t make up for the pointless meandering and the unnecessary hostility of the main couple or the baffling enemy who’s actions never make sense, it does make it feel like there was some point to all of this nonsense.

The point is, we sacrifice almost everything for our kids, and that’s the way it should be. Given a choice, some parents will sacrifice nothing, others will give everything including their lives to save their kids, and parents watch something like that and get a bit teary: “Sure, come the Robot Apocalypse, I’d kill everyone that looks at my kids sideways, or die for them, or preferably both.”

Don’t get me wrong, this film brought no unbidden tears to my eyes. It’s not even that good, and insurance commercials can sometimes make me cry. But this flick sticks the landing when it had almost no right to. It’s an ending that also reduces women to birth receptacles, not even mothers in this context, and fathers to burly protectors until they can protect no more, but it offers a glimmer of hope in what is still a pretty dark ending for films of this kind.

Shoddy, unloved films of this kind.

And no there will never be a sequel, which is probably a good thing.

5 reasons I also have no idea why they called it Mother / Android, other than to imply she’s both a Mother And / Or Android out of 10

--
“This play introduced the word robot into the human language. It ends with our extinction. We knew it the moment we gave it a name.” – these words, I don’t think they mean what you think they mean - Mother / Android