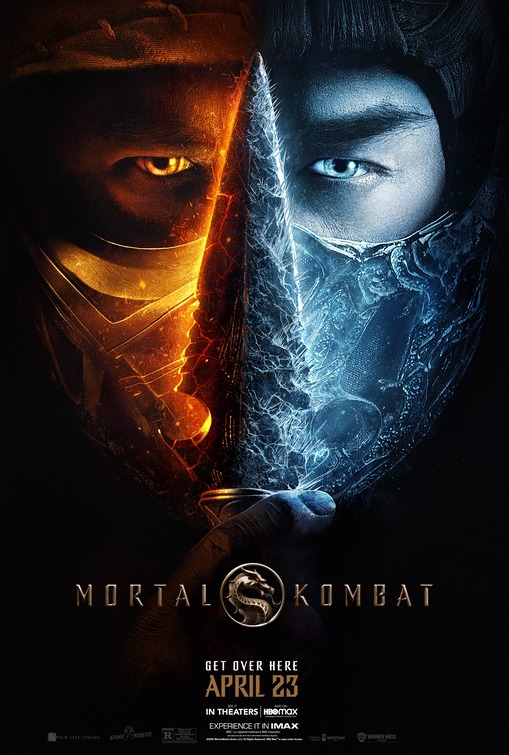 And you know, it ain't fiction, just a natural fact
We come together 'cause opposites attract

I was wrong. I am often wrong, it’s not that big a deal, or that rare.

But in this instance what I was supremely wrong about is that I thought Godzilla Versus Kong was going to be the biggest, utterly fucking dumbest big budget flick of this year. For some reason I was convinced that, because we were going to be seeing flicks produced before 2020, that they were going to run out at some point, and plus a sense of proportion or shame was going to predominate in the minds of studio executives and producers.

They were going to look at the 3 million plus people who have died from the virus, and the many more whose lives have irrevocably changed, and they were going to think “Oo, should do something more respectful with our existences, and our privileges / wealth, shouldn’t we?”

How fucking wrong was I? The way forward, like it’s always been, even more so now, is to keep doubling down.

Mortal Kombat makes Godzilla versus Kong look like a Shakespearean play written by Professor Stephen Hawking produced by John Bell and starring Dame Judi Dench and even more of a Dame Maggie Smith duking it out over the neon-lit skies of Hong Kong in comparison.

It is so fucking dumb. But, and here’s where I do a heel turn so abrupt it brings whiplash even to me, which is only fair, Mortal Kombat movies have to be fucking dumb, because there is no other way to do them.

The “original” flick from the 90s was utter trash, the sequel Annihilation was somehow even more terrible, and this is the best of the lot, but they are all levels of potent trashy trash. Trash, and I’m ashamed of myself for what I’m going to write next, can still be plenty enjoyable.

This new Mortal Kombat is trash, but I enjoyed it anyway.

I think what a lot of reviewers forgot when this came out were these very crucially important, world-changing facts:
Fact 1: The game Mortal Kombat itself was dumb 90s trash which used dated 70s and 80s action tropes as a way of being preemptively nostalgic for a time that hadn’t passed yet
Fact 2: The only thing that differentiated Mortal Kombat from the other beat-em-up games of that era was that it was way more gory and gratuitous than anything else in existence.
Fact 3: Any pretense of seriousness or appeal to intellect for these kinds of things is wasted effort, because even at its best it’s really as complex as professional wrestling only with more of a horror / fantasy / vaguely Asian aesthetic.
Fact 4: a movie adaptation of Mortal Kombat is better placed than almost any other kind of game-adapted-to-movie because it eventually became itself a game that plays out, at least in story mode, as a “movie”.
Fact 5: people, the opiated masses, the huddled and locked down, just want to see a bunch of Fatalities.

The fact that this was made in Australia, and in South Australia no less, is the fucking cherry on top. It has all the gravitas and importance of a high school musical, without the highs or the music. Lewis Tan, who can fight well on camera, I swear I’ve seen evidence of it (somewhere else), is forced to play the stoic, feeling-free lead, in the manner in which lead actors always, always, always have to be because the laws of toxic masculinity and cinematic representation mean men are not allowed to feel things on screen because eww.

Did Keanu Reeves express an emotion in any of the John Wick movies? No. You knew he was angry when they killed his dog because he killed 4 thousand people, but he never laughed, cried or felt like killing henchman after henchman was perhaps not the best use of his time or abilities.

Did he express any emotions in the Matrix trilogy? Exactly 2 emotions were ever expressed: “Whoa” and then he cries once at the end of the 3rd flick because of Trinity.

Is this an indictment of Keanu Reeves’s limitations as an actor or action films in general? I’ve lost track. Jason Statham, if he ever cried on screen, would probably end up punching the tears until they went back up into his tear ducts, if he even has any.

Let’s face it, the only legitimate emotion you are allowed to express as a Man in Action Cinema is the Satisfaction of a Job Well Done, and that’s it.

Lewis Tan expresses no emotions throughout this long arse flick other than irritation, but that’s okay. That’s allowable under the Statute of Emotional Limitations that controls action cinema. Even if his character of Cole doesn’t exist in the whole Mortal Kombat universe, one which includes everything from people with four arms to Aztec sun gods, insect people and ice and fire ninjas, well, I guess you have to have some regular people in the mix so the audience can “relate”.

Cole is a loser. He literally loses all over the place in mixed martial arts matches like the loser that he is. They pay him to lose, but he has the air of someone who would probably lose for free even if they didn’t pay him to take a dive. Somehow this loser has a wife and family for the otherworldly goons to threaten, which completely messes with the aesthetic of loserdom. To truly make him the loser they want him to be, he’d have to be divorced, way behind on his child support, and sporting Confederate flags all over the place.

But no, plus he’s Chinese-British, so the flag of the Lost Cause isn’t one he’s allowed to fly. A weird army type jerk appear out of nowhere and start protecting him when other weird jerks are hassling him, telling him that the world could end if some jerk from some other realm wins some stupid tournament. This guy, Jax (Mehcad Brooks) sacrifices his arms to save Cole. I mean, that’s a lot to do just to save a main character.

Jax had a partner, Sonya Blade (Jessica McNamee, who is the spitting image of Steph “Hex” Bendixson from Good Game), who is also a vague military type tasked with a) kidnapping and beating up Australians b) saving the world from a sorcerer called Shang Tsung (Chin Han) who wants to do unspeakable things to it. Cole finds Sonya. More goons attack, so they have to go to a mountain top temple where Lord Raiden, god of lightning(?) swans about like Liberace but without the charm.

You could be thinking that this is going to lead up to an actual tournament, but, in a major subversion of expectations, and probably because of a shrinking budget, there’s never a tournament between the heroes of Earthrealm and the dastardly jerks from Some Other Place. There are some long training montages, there’s an irritating, annoying, sexist racist Australian mercenary called Kano (Josh Lawson) being the kind of jerk only the current prime minister could possibly match whose just begging to be killed in a horrifying way, and there’s never a sense that any of this actually makes any sense, but they’re still going to take it seriously.

At Lord Raiden’s temple, there are these two champions who can actually fight. One is a monk who can kick stuff really well. The other has a hat, like, a metal hat. That makes it easy to differentiate the two. They, being Liu Kang and Kung Lao (Ludi Lin and Max Huang) I liked. I liked a lot of things in this.

It is utterly serious and utterly without its tongue in its cheek, as a movie, as entertainment, but makes no sense and therefore it feels like nothing, especially the fate of the world, is at stake.

Which is okay. I just want to watch these awful people die horribly. Kano is a case in point. In every iteration of the game and movies, and the storyline as it went along, Kano was always an annoying, traitorous piece of shit. In the first movie, they didn’t even have the decency to cast an Australian when there were plenty of dickheads available; instead they hired Trevor Goddard, from Croydon, England, not Croydon, Melbourne to play Kano. Here at least they found an actual Australian, being Josh Lawson, who in everything else I’ve ever seen him in is just as annoying, but for once using his innate qualities of annoyingness perfectly suit this stupid character.

For reasons that probably have to amount to favouritism, or racism, whatever, Kano gets the vast majority of words spoken on screen. Not, like, important words that serve the plot, or artful dialogue to make us smile with its wit or wisdom. No, NO, it’s mostly insults, Australianisms that would make Slim Dusty cry at his Pub With No Beer, racist taunts and rape threats. It’s the part Josh Lawson was born to play. If it’s the screenwriter’s device of making an annoying side-character so fucking annoying that you long for their brutal death, well then, mission thoroughly accomplished.

I’ve left out the obvious stuff about Sub-Zero and Scorpion because, well, they looked great, they fought well, and all the other window-dressing hides the fact that they’re the main characters despite all the other bullshit. Jax gets metal arms and bursts people’s heads; Cole gets to be a bit powerful once he realises he is The One, Sonya kills the Aussie piece of shit, what’s not to like?

I would really like to see a sequel to this, I just want them to keep upping the ante and bringing in more insane elements and nastier critters, and actually have a fucking tournament or something. And maybe kill more annoying Australians, why not.

Sober, I do not think I could have gotten through this film. Luckily for me, on a Thursday night last week, it very much wasn’t the case.

--
“Throughout history, different cultures all over the world reference a great tournament of champions. That dragon marking, I think it's an invitation to fight for something known as Mortal Kombat.” – they should have asked the Girl With the Dragon Tattoo to come along as well, then - Mortal Kombat