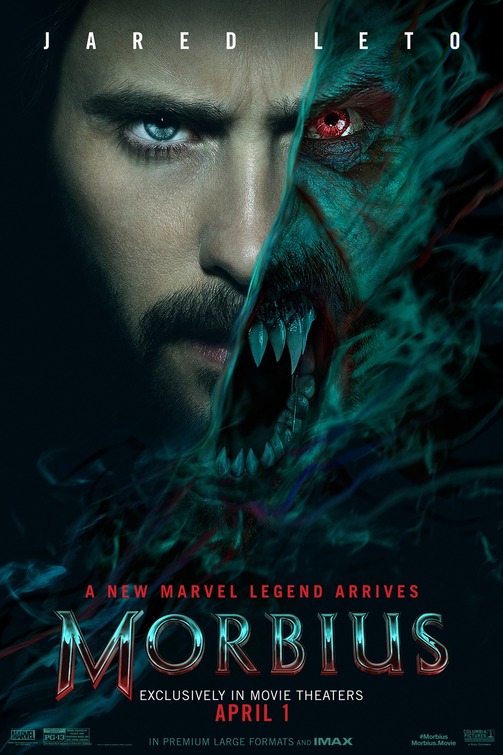 This should have been called "Morbius - Are you having
a laugh yet?"

Another week, another Marvel related extrusion from the Play Do factory.

If you’re wondering how or why this relates to anything to do with Marvel, it’s of the “very stupid” section of their back catalogue, the one that produces those terrible Venom movies; of characters no-one really cares about getting their own films played by people who know better but do panto during the summer break for extra money.

This, however, doesn’t it feel like it wants to or needs to even be anything vaguely connected to Marvel: it’s a dumb and generic vampire movie about a guy who turns himself into a vampire and fights another guy who’s a vampire and then kills that guy and it’s mostly done.

The end. No more to see here. Let’s hope.

What’s almost funny is that this doctor (Jared Leto, ugh) finds these bats, and decides to take their DNA, and put it in himself, and then he becomes like a bat, um, man? There’s even a scene where he stands in a circular glass chamber and the bats fly all around him, and there’s this Hans Zimmer music that sounds awfully like... that other film where a guy has an affinity for bats, and even dresses like one?

This flick is terrible, but not in enjoyable ways, just in generic ways. It’s not particularly horrible to watch, it’s just not that entertaining. Jared Leto speaks with an accent not of this earth, and yet he’s not playing an alien. Watching him simulate what he thinks is human behaviour is almost touching sometimes. It’s like watching a dog play the piano. He gets the idea of human interaction without the specifics that would make it seem like realistic human behaviour.

There’s so little there, to this story, behind this story. There’s a flashback to twenty five years ago, which, in case you were wondering, makes this scene set around 2000, and yet it seems like the 1940s. A young Michael Morbius, in a hospital bed, greats a new patient at this… place. He is told the child’s name, but he insists to this young chap, that his name is Milo, because he’s called all the children who’ve occupied that bed Milo, regardless of their actual name, to perhaps honour the first kid that was there, who’s died, and been replaced by other kids who have died.

These kids have some kind of blood disease, I guess, one that leaves them walking with canes and on the verge of death their entire lives, until they both somehow grow up and Michael becomes a doctor who invents artificial blood, and Milo (Matt Smith, even more annoying here than he was as the eleventh doctor in Doctor Who) becomes, I dunno, some kind of trust fund crime lord or something?

They both have a kindly father figure in the form of Dr Nicholas (Jared Harris, the only one who’s really slumming), but he’s less of an Alfred Pennyworth and more just some guy who’ll die at a convenient time to make it seem like there are stakes in this film, pun unintended.

Dr Michael Morbius creates what he thinks might be a cure for the disease he and Milo have, but it makes him a strange thing that’s supernaturally powerful but craves blood all of the time. Milo insists he also needs the cure, but Morbius says nuh uh.

Milo needs it to live though, so he becomes a monster too, but doesn’t feel bad about it. Cue sibling rivalry. Cue Milo killing a bunch of people until Michael stops him.

They have a bunch of weightless CGI fights, four or five of them, with the colours of their clothing somehow smearing in the air as they jump about. This goes on for a long while. It’s not interesting. If I’ve made it sound like any of it’s interesting, I’ve failed as a writer.

Some cops chase Morbius, thinking he’s killed a bunch of people by stealing their blood somehow. Tyrese Gibson, who is one of this world’s most boring actors, plays this role like he’s bored and tired, as flat as anything. Leto is flat and weird in every line reading that he gives, but at least he is weird. Matt Smith acts and overacts like it’s his last chance to be in a Marvel movie, so he might as well gurn and grunt his way through as many scenes as he can, which is all of them.

There’s a love interest, but honestly, she barely deserves a name, and then she’s gone (even though it’s clearly implied she will come back in some deathless sequel). That this version of Jared Leto is meant to be somehow in love with his fellow doctor, or anyone other than his gothly self is harder to believe than the idea that genetic engineering can somehow lead to vampires.

It did make me laugh when there is a scene of him near death pre-cure, where he’s as emaciated and as bony as he was when he won the Best Supporting Actor Oscar for his role as Rayon in Dallas Buyers Club. That time, he actually had to starve himself down, whereas this time it’s digital effects.

Post-cure, there’s a scene where, shirtless, he admires his miraculously buff chest and abs in a mirror. He notes it, but, flat as his character is when he’s not growling for blood, an expression barely flickers across his ivory face.

There is no scene of Matt Smith admiring his own naked torso, but instead there’s a scene of him getting dressed and dancing in front of a mirror, admiring his rakish good looks as he intends to have a violent night out on the town. At least he’s enthusiastic about his upgrade, unlike his dreary friend.

More times than The Force or The Dark Side are mentioned in Star Wars movies, Michael talks about how his need for blood, or artificial blood, is increasing, in that the time that it lasts before he gets withdrawal symptoms keeps getting shorter and shorter. He mentions it at least 300 times.

This film doesn’t matter, shouldn’t matter in any scheme of things. That Leto thought this was his ticket to his own franchise, is hilarious. I can’t imagine the person who likes this film, even if they’re the grimiest, least-washed comic book nerd in the proverbial basement. Matt Smith was more of a villain in Edgar Wright’s Last Night in Soho, and he didn’t need vampire powers to be evil there: here he just yells a lot, and it’s kinda not interesting.

Marvel has only once made a cool vampire flick, and it was called Blade, and that was a very long time ago. It was cool, it was trashy, it was funny and it worked. This flick Morbius, despite coming from the same stable, is none of those things, achieves none of those simple benchmarks. All it has is weak and exhausted references to a million other vampire flicks, of which there’s nothing special or unique about any more.

Of course it has post credits scenes. They are as dumb and pointless as the rest of the flick. But I will point out that the very last scene of the flick has two characters meeting. One actor, being Michael Keaton, once played Batman, played the lead in a flick called Birdman, played a villain in a Marvel movie as The Vulture, and he’s now meeting a character played by an actor who’s played the Joker, now playing a character who’s transformed himself into a fusion of bat and man, a batman, if you will.

That convoluted pretzel has broken my brain. Morbius is hilarious in the sense that if you watch it, you will wonder why anyone thought this would make money, down to making there being Morbius showbags at the next Melbourne Show in September.

Surely all the kids will be dressing up as Jared Leto come Halloween?

--
“I went from dying... to feeling more alive than ever. Increased strength and speed... the ability to use echolocation... and an overpowering urge to consume blood.” – I felt the same after my third Pfizer shot - Morbius