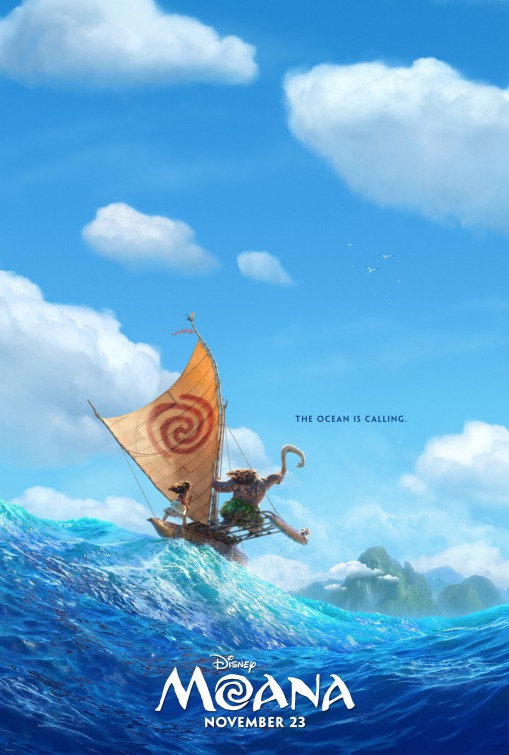 So the fact that Disney employed a majority of people for the voices whose ethnicity has some kind of connection with the Pacific island nations instead of just getting Justin Timberlake and a bunch of other pasty Canadians to voice everything doesn’t really make that much of an impression on me. I don’t like a flick more or relate to the characters more just because they’re voiced by ethnically appropriate personnel.

What matters is that they be great. And I can’t really imagine anyone greater than The Rock at the moment in this world that we call our home. The Rock is great in ways that transcend merely having massive muscles or being great in terrible movies. To say that he is perfect to play the trickster trouble making demigod Maui in this wonderful flick would be, if possible, some kind of understatement.

The fact that he can also kill it in a singing role in a light comedic animation like this just means that he’s the kind of megastar who keeps finding new difficult things to be awesome at. The only way, the absolute only way he could have been any more awesome in the role would be if his massive character could have had a scene where, wearing a plaster cast on his harm a day after breaking it, he found the time to break it just by flexing his massive muscles and said “Daddy’s got to go to work”.

There’s only really three characters in this flick, and one of them is just a chicken, and a very dumb chicken at that, one so suicidally stupid that the two main characters, Moana and Maui, spend much of their time trying to battle monsters, sail a boat in harsh circumstances and keep the chicken alive against all indications to the contrary. The thing doesn’t want to be alive, just let it go, I say. Let it go like some other Disney princess flick kept insisting we should do.

But that ain’t how I roll. I’m all about holding onto things no matter until the very end of time. And what I am holding onto right now is just how flat out enjoyable this flick is.

Of course Disney has a formula. Of course we know this formula better than we know the story of our own lives, which doesn’t seem to confirm to the neat narratives these flicks constantly serve up. I watched this with two glorious girls recently, and even they were calling out the stages of the plot before they happened. One of them sarcastically turned to the other and said “this must be the part with the Boss Fight” and she wasn’t wrong.

When two ten year old girls (just turned as of last weekend, in the case of one of them) can pick the story beats as they’re about to happen, you know you’re on a very unsurprising journey into the heart of something new but always familiar. Only a churl would churlishly complain, though, about the predictability of one of these flicks. If the end destination is unsurprising, then at least let’s enjoy the cool blue visuals and snappy songs along the way.

And there are plenty of both. It’s set mostly on the Pacific Ocean, so how could it not look glorious? Moana is perhaps a step forward in female representation in a Disney animated movie, and maybe she’s a good role model for young girls. It’s just that I’m not sure it means as much to them as it does to the parents or the makers at Disney who run the risk of getting sore shoulders from patting themselves on the back so much.

Maui makes the bigger impression, because he’s big, he’s fun, he talks a lot of shit, and he sings some pretty okay songs. He also has tattoos that change dependent on circumstance, with one particular tattoo version of him that seems to act as his good conscience, urging him to do the right thing when it’s the last thing he wants to do.

He has somehow managed to skronk things up on all the islands because of something he stole which made one particular volcano evil thingie go berserk. This releases some kind of dark corruption into the world which threatens all islands, but first Moana’s. Moana gets the clear indication from the sentient ocean and her dying grandmother that turns into a manta ray convinces Moana that the current tendencies of her people staying put where they are is a bad idea. She needs to get out there into the world, in order to save it, save herself, and save her people.

That’s a lot to put on a girl’s shoulders. But she has a determination to repeat a bunch of words at Maui, when she finds him, which will somehow compel him to help her, despite his being such a charming and handsome jerk.

And much adventure, action and yelling at each other along the way is going to have to happen, plus there are also going to be a bunch of songs. It’s probably not the best song, since the one Lin-Manuel Miranda sings himself about the islander folk setting sail and being voyagers is probably the ‘best’ song, with him being the renowned showtune-hip hop songsmith, but nothing is going to be as memorable as You’re Welcome, which The Rock sings fine in all his Autotuned glory. It’s big and brassy, just like him. There’s no way, though, that the song is going to latch onto the public consciousness the way the bloody songs from Frozen, well, one specifically, were drilled into our heads for months and years after the bloody film came out. It’s not that I think they’re not as great as previous ones, it’s just that they’re okay.

None of them, of course, hold a candle to the Tangled soundtrack *sniff*. Everyone forgets about how great Tangled was *sniff, sob* because now it’s all Moana this and Frozen that…

It’s all solidly predictably Disney fare, and that’s okay. I loved hearing Jemaine Clement singing as the nasty giant crab (I didn’t like how it was animated, but Jemaine is always a delight in each and everything he does, and even fills out the ethnic diversity requirements by being Maori), and I was sad when his time in the story came to a natural end.

In the end, it looks nice, there’s a nice dynamic between the leads, the story is interesting enough, dealing as it does with Polynesian myths and legends covering a whole bunch of islands all over the Pacific, and the ‘final’ resolution gently subverts the ‘destroying the main villain to save the world’ by revealing how all the world’s problems are self-created through shortsightedness and abject Islander stupidity on the part of the demigods (that was the message, right? That Samoans do bad things or something)

And the stupid chicken made me laugh with almost every stupid thing he did.

8 times the stupidity of the chicken seems to be a sustained argument against the Darwinian theory of evolution out of 10
--
“Are you just trying to get me to talk about myself? Because if you are... I will gladly do so! In song form!” – you always deliver, Jemaine, always - Moana