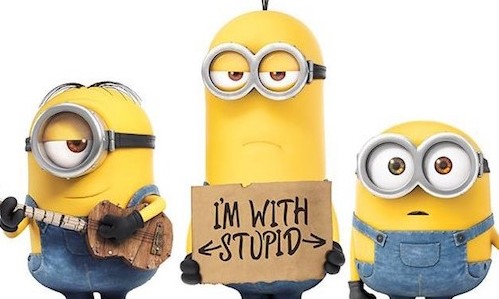 Yes, they are stupid, adorably stupid, like all the best movie characters

They have their own film now. The makers of Despicable Me thought there was too much of talking humans in those flicks, too much Steve Carrell using a Russian accent. So they felt the need to give us the origin story of these allegedly lovable yellow idiots.

Make no mistake, they are complete idiots. They are also, strangely enough, immortal beings, the movie posits, that have been alive since the dawn of life on this hellish planet. And through the ages they have latched onto whichever is the biggest and baddest predator they can find.

It may seem like evolution has dictated that they have a symbiotic relationship with nature’s greatest ‘villains’, but their innocent, mindless actions usually end up killing the thing they love. Maybe evolution doesn’t really come into it, since they don’t die, they don’t change; they just keep accidentally doing what they do best.

Maybe that is Nature at work: maybe some of these predators, be they Tyrannosaurus Rexes or Napoleon, need to be put down in order to restore balance to an ecosystem, be it during the Jurassic era or 18th Century Europe. They don’t want to kill their master, but they do it anyway. Maybe they are divine yellow Furies, sent by the gods to punish egomaniacs for their hubris, for their temerity, for daring to think themselves the equals of the gods.

If this movie, since it’s a prequel to the Despicable movies, is telling a story (and I’m not entirely sure that it is, as opposed to a random collection of ideas that might be funny), it’s a strange kind of origin story. It’s not the story of how the minions came to exist, since they just exist from the moment life first appears on Earth and that’s it, but of how they eventually came to be in the employ of a certain supervillain.

But to get to your Prince Charming, you’ve got to kiss a lot of monstrous, bouffanted frogs.

After attaching themselves to, and then killing a whole bunch of apex predators – alpha villains, the minions find themselves at an impasse. They isolate themselves in a winter wonderland (and I really thought an evil Santa was going to employ them to make dangerous toys with non-existent safety standards) for a long time, only to find that their existence is meaningless without a villain to attach themselves to. Life itself loses its flavour for them. All their pastimes seem pointless. Immortality never seemed so superfluous.

One of the minions – it’s irrelevant which one, really – decides he, she or it must venture out of their icy cave in order to find a new master to serve, and needs some volunteers. Two other morons volunteer, and history is made.

I would have thought it would be near impossible to make a flick that works based on these yellow clones who speak in seeming nonsense, but I guess that the folks at Dreamworks are geniuses who can make anything work.

The story makes no sense, but it’s not like it was supposed to. The Despicable movies at least have the purpose of humanising a villain through the love of a bunch of orphans and a redhead, making him a better person etc etc. Minions is just about the Minions doing Minion-y things all day long and having a Zelig-Forrest Gump-like impact on human history.

By random coincidence, in the 1960s, the minions decide the villain they need to latch on to is the most famous, most badass villain around, being Scarlett Overkill (Sandra Bullock, who is pretty much a supervillain in real life too, I think?) Overcoming the sexism of her cohorts and the glass ceiling preventing women from really excelling at crime, she declares herself the baddest badass in Christendom, and everyone agrees with her.

I’m not sure how much of a feminist statement it really is, striving to be the worst villain in a category traditionally dominated by men. Wait, isn’t that what Margaret Thatcher did? Maybe it is, I dunno, but does it come down to her husband’s gadgets that she uses, or is it the will to power she exhibits? I’m not sure.

Naturally, the minions, being entirely simple, must be with her. Simple as that. They perforce must travel across the nation/world in order to be with her. Because… I dunno, it’s in their DNA/contract.

For me, the strangest and perhaps funniest part of the flick happens during this preliminary, relatively peaceful interlude. The yellow morons try to hitchhike, and are picked up by a family of criminal psychopaths.

These bland, surburbanite, stationwagon-driving armed robbers are also desperate fans of Scarlett Overkill, and so naturally the minions have an easy path to the one they love. Along the way, though, they get to maim/kill a bunch of cops accidentally on purpose, so that makes it all worth while.

It would be pushing things too far to claim there’s any transgressive humour/tendencies on display here, because, after all, all three flicks in this series are predicated upon siding with the ‘bad’ guy (who’s effectively neutered before the story begins). Just as their actions generally ruin the person/thing they’re trying to help, well, if it occasionally works out to someone’s benefit, it can’t be all bad.

When they eventually get to work for Scarlett, it comes as no surprise that they can’t carry out Scarlett’s plans properly, which is to get her to be the Queen of England by stealing the Crown Jewels, something which can’t even work in a cartoon version of Britain. One of the yellow morons somehow ends up queen of England, braying like a donkey at the masses, who cheer mindlessly all the same.

Jennifer Saunders as the Queen was hilarious, especially when they show her post-abdication, sinking pints in the pub, arm-wrestling burly geezers. I also especially found Jon Hamm’s obsequious lickspittle husband to a supervillain oddly enjoyable too. I’m sure all the Mad Men fans amongst the kids were also delighted by him

I can’t tell whether the flick was anything other than a colossal waste of time/enjoyably ridiculous romp through pseudo-history. They are not mutually exclusive. Despite the 3D option, I could not really see the point of a 3D version, which only goes to town towards the end, and even then only during the start of the credits.

Kids love the minions, there’s no doubt, they are an inexplicable marketer’s wet dream, something I could never have predicted. If you had shown me the concept design at the initial stages of when the first film was planned, I would have screamed “Get the hell out of this office/strip club, you’ll never work in this town again!” at whatever merchandising person came up with their look/existence. That’s why the quality geniuses at Dreamworks are in the jobs they’re in, and why I’m the jerk writing reviews of their efforts. Everything eventually finds its proper level in this world.

I think the appeal to kids is that the minions are basically goofy kids themselves, who in their hyperactive dangerously helpful attempts to do their master’s bidding, end up causing all sorts of havoc. The villain, really, is adults, especially their own parents. They are the holy innocents / fools who get yelled at no matter what they do or what their intentions were.

And they seem to have a ridiculous amount of fun doing everything. I could even throw my Buddhist beads/robes on and start rambling about how the Buddha would probably see these jaundiced simpletons as enlightened beings, having achieved a state of zen without even trying to, but that would be way too pretentious for this goofy charade.

My daughter loved the film, and was literally jumping out of her seat as this was going on, laughing frequently. Me? Not so much. I think I had a bit of a bemused expression throughout, but I did enjoy that she was enjoying it. Dumb fun as it might be, it’s exactly as dumb but somewhat more pointless than I would have guessed. I was happier when a certain villain showed up at the end, because that villain is the main attraction for me with this series, not the hired help.

Still, it was an okay way to spend 100 minutes with a happy daughter, which is golden in itself.

7 times if the Minions were doing my bidding, I’d send them to Canberra to ‘help out’ our brave leaders out of 10

--
“Once upon a time, there were three little pigs. The pigs encountered a big, bad wolf, who hired the three pigs to come work for her. One day, the pigs did something very stupid, so the wolf huffed, and puffed and she BLEW THEM OFF THE FACE OF THE EARTH! The end.” – that seems fair – Minions.