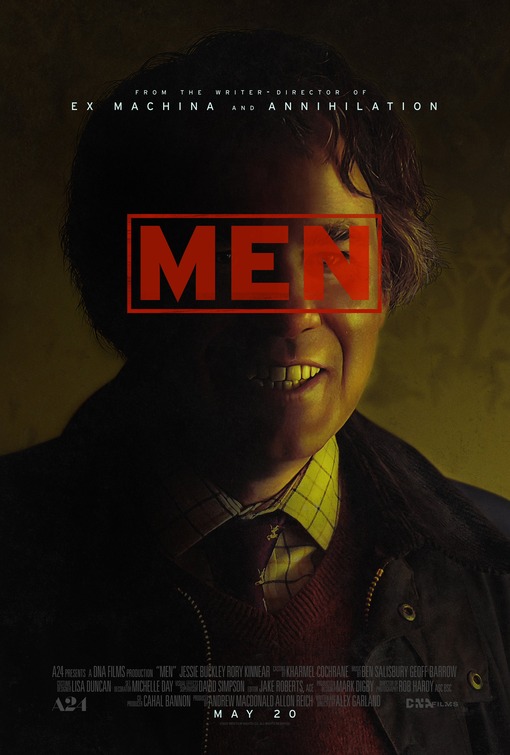 Them teeth though, they be the scariest thing in the movie

I have to admit I really didn’t get this flick. I don’t think I understood it, but that’s okay, because understanding is overrated. I enjoyed it, it was well filmed, it had a weird, ominous atmosphere without generally being that horrific. At least until the last section…

There is a woman who is the main character in this flick (so, false advertising, right there). She has recently lost her husband after he struck her and then threw himself off the building they lived in. All because she wanted out of what was clearly not a healthy relationship.

She, being Harper (the great Jessie Buckley), needs some time away, and so rents a stately country manor, in the country somewhere. The landlord (Rory Kinnear) is an odd enough chap, but nothing too worrying just yet. It’s some hick town, very green. No problems here.

If there is a problem, it’s that a naked guy (Rory Kinnear) starts following her about, tries to get into the place she’s staying, and no-one, including the cops, really gives a damn. There’s a male cop (Rory Kinnear), and a female cop, but, confirming the old adage that All Cops Are Bastards, she gives even less of a shit.

Seeking solace in the arms of the church? Well, the vicar (Rory Kinnear) is a right prick as well, blaming her for her husband’s suicide, telling her all the ways in which her wickedness taunts all men.

It’s not for nothing that Harper eats a red apple that falls from a tree outside. For some reason the image keeps reoccurring, not sure why. True, Eve is the first scapegoat in the Bible, but it’s not her fault that men are weak and vicious.

Oh no, you can’t blame her for that. Also, even the young boys of the town are already misogynistic pricks, one of them (Rory Kinnear) calling her a stupid bitch because she didn’t want to play hide and seek with him.

Hang on, in the church, why was there the image of the Green Man from folklore on the font, and why do they keep showing us the image of a Sheela Na Gig, a female gargoyle – grotesque, doing her thing?

What do these pagan symbols of the monstrous masculine and the monstrous feminine have to do either with the price of fish or this film, thematically speaking?

I…have no idea. The naked Rory Kinnear starts putting leaves into his face, so that Rory Kinnear at least is the literal Green Man, symbol of some kind of weird fertility / spirit of rebirth? And why are all these Rory Kinnear’s tormenting poor Harper, in all their forms?

It’s not entirely clear to me that what is happening is really happening even within the context of Harper’s experiences. I wasn’t, later in the film, even sure that she was seeing what she thought she was seeing, and it’s not the idea that her experiences are supernatural, it’s just that their illogical, more like the crazy stuff that can happen in dreams rather than a woman being tormented because Men gained sentience and turned on their masters.

It’s the little micro-aggressions, of being a woman in the world, of being disbelieved, being questioned as to who they are in proximity to another man (as in, questions of marital status are really just polite ways of saying “and who owns you, again?” Of a woman alone at a pub, with bored seething locals (also Rory Kinnears) who could just as easily attack as leave you alone, it’s all the same to them.

I couldn’t tell you what the later part of the flick means. All of the men (with one clear exception) in that last sequence are different men (Rory Kinnears in different wigs), but they all share the same terrible wound that Harper inflicts in self-defence. But then it leads to a sequence of birth, rebirth, rebirth and birth again so ghastly I’m not even going to describe it, but allude to it I will. And while I thought, looking at it, that David Lynch and David Cronenberg would watch this flick and be so jealous that they didn’t have this level of special effects technology thirty years ago, I came away from the experience somewhat nonplussed.

I mean, it didn’t really mean anything, and Harper seemed happy at the end, so I can barely fathom what that last bit means.

Maybe it’s that men give birth to the ugliness and sadism in other men by forcing them to carry on a legacy of misogyny through an endless cycle of rebirth, of creating their own awfulness, and visiting it upon each other, but, I dunno, that seems like a bit of a reach.

A lot of the time I was wondering whether Harper was hallucinating, so, how much did that mean to me?

Jessie Buckley is great in everything she’s in, even when the films aren’t that great (I’m mostly thinking of I’m Thinking of Ending Things, which, ugh), and she’s okay here, but there’s not that much for her to do other than be scared and slightly put out most of the time. Rory Kinnear does great with all these different roles, never really going too over the top, and even being allowed to be the one funny person in the whole film.

Garland can be quite a cerebral writer / director, and you can sometimes come out of his films baffled (like with Annihilation) or thinking he’s a bit of a cheeky monkey (like with Ex Machina). But I generally always have a good time at one of his movies.

I still don’t know how I feel about this one. I am totally in agreement with the idea that men suck and that most of the bad things in this world are directly because of how much men’s egos suck and need to control / destroy everything around them. I was prepared for a movie like that. I was onside with that sentiment, with the idea of a woman being under siege from men.

But I don’t think that’s what this film is about. Sure, Harper’s husband was a manipulative and abusive piece of shit even if he didn’t think he was, and all the subtle and less-than-subtle ways that all the Rorys are awful to Harper suck and are experienced by women around the world daily.

But, hmm, that ending. I’m going to need either some time or a stiff drink to figure this out.