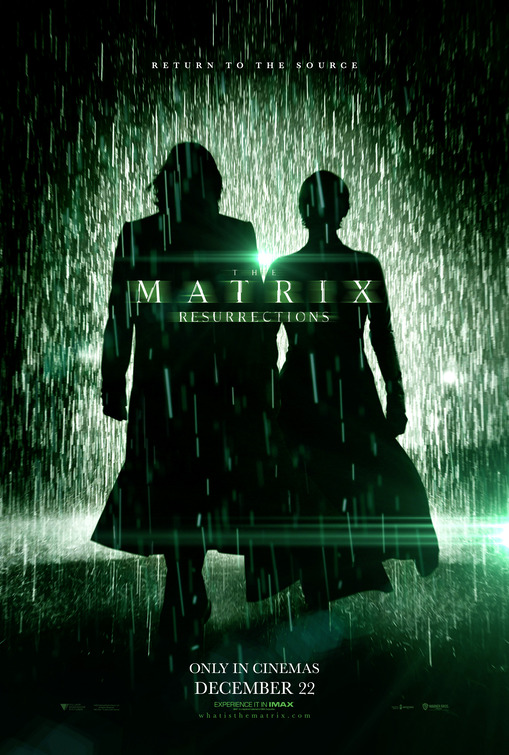 Well. I have seen The Matrix Resurrections. I imagine I will be one of the lucky few.

What I’m going to do now is not something I usually do in reviews, seeing as it’s going to be pretty annoying and not very illuminating without context. But I’m going to type out a sequence of dialogue verbatim as it was in the movie.

All the context I’m going to give you is this: Keanu Reeves, as Neo / Thomas Anderson, is alive, and works for the biggest gaming company in the world. He has a boss, and it’s the boss talking to Keanu / Neo:
“I’m sure you can understand why our beloved parent company Warner Brothers has decided to make a sequel to the trilogy.”
- “What?” (that’s Keanu saying “what”)
“They inform me they’re going to do it with or without us.”
- “I thought they couldn’t do that.”
“Oh, they can, and they will, and they made it clear they’ll kill our contract if we don’t cooperate.”

Okay. So. The people, who have made this film, including the director Lana Wachowski, didn’t want to make this film. If you include lines of dialogue in a film, and mention Warner Brothers specifically, being the company that Lana is saying she was pressured into making this film by, what possible incentive is there to make a decent flick?

I have no idea just how resentful Lana might be, but she’s certainly delivered on her contractual obligation, as have apparently Keanu and Carrie-Anne Moss.

How are their characters alive, you may ask, since we watched both of them die for the good of all humanity at the end of the dismal Revolutions? Well, the pesky machines, the AIs that dominate the Earth in the future and who enslaved humanity, literally within the context of the movie resurrect both of them, put them back in pods like they were in the beginning, and use Neo to keep enslaving humanity.

In the Matrix, as in, the virtual reality within the context of the films where most of humanity live and think is their actual real lives playing out, the machines resurrected Neo in order to have him keep enslaving humanity with entertainment.

So that would mean… we’re the ones enslaved by the machines?

The philosophy and the fighting are also mentioned. Everything is mentioned. The film becomes its own thesis and anti-thesis as to why it shouldn’t exist.

I have to remind myself that those films came out 20 years ago. I can’t believe I’m that old. I was already an adult when these films were unleashed upon the world. Asking these people to reprise these roles almost seems like an act of cruelty.

One of the big “jokes” in the flick is that people can’t believe how well both Keanu and Carrie Anne Moss have aged despite the passage and ravages of time (on the rest of us), and multiple references are made to it. There’s constant intercutting of sequences from the other films, especially the first, so we get direct comparisons as to what they look like.

There’s a scene with Neo and a woman that looks a hell of a lot like Trinity, but called Tiffany, where she asks him, as the man who designed the game and the characters therein, and she wonders why Trinity looks so much like her. Her husband laughs at her when she mentions it, because how she and Thomas see each other, or themselves, is not how other people see them. Their digital self image is not the one the rest of the world experiences, almost like the way the lives people try to portray on Instagram or elsewhere online isn’t real.

Oh, yeah, Tiffany’s married with kids, so whatever Neo / Thomas is cooking up, in the present, that’s a no go.

You see, giving someone a husband and kids is a great way to control them(?)

There is an intelligence that orchestrates everything in their lives. Neo and Trinity, Thomas and Tiffany, have to be kept close to each other, but not too close. That tension makes everything else either more entertaining or believable for the enslaved.

Thomas, even before people start appearing out of nowhere and quoting scenes from the first film, has clearly been struggling with mental health issues, insofar as he sometimes gets confused, and wonders maybe the experiences in those films are his memories, or whether he’s just delusional. For his own good, for his mental health, he regularly takes these large, garishly blue pills, in order to feel safe.

When he gets overwhelmed he visits his Analyst (Neil Patrick Harris), who’s always quick to reassure Thomas that he’s making great progress, and everything he’s experiencing can easily be explained because of the stresses of his life. I’m sure it’s just a coincidence that the frames of The Analyst’s glasses are the exact shade of blue of the pills Thomas has to keep taking.

All the while, the people in the “real” present are trying to do what Morpheus and his crew were trying to do in the first movie, which is to free Neo, who kinda has the powers he had before but kinda doesn’t?

The thing that big fans, especially of the first movie, are going to find most baffling is the replay of the opening of the original movie, down to a group of police trying to arrest Trinity in a dingy hotel room, the hotel being called Heart O’ the City. Some parts go exactly the same, but none of what we remember happens the same way.

It does however introduce us to someone I hope will actually be an important new character, being Bugs, played by the awesome Jessica Henwick, who was so great as Colleen Wing in the Netflix Iron Fist series. Here she gets to fight with guns instead of swords, but it’s handy to be able to do both, and she has cool blue hair.

Speaking of rebooting stuff, what’s funniest to me is that she’s essentially the reboot of the The Kid character from the sequels: a wide-eyed idiot who thinks Neo is Superjesus. Here, her version is less of an idiot (by miles), but she still thinks of him as the guy who opened her eyes because he thought he could fly.

Less really graspable is Yahya Abdul-Mateen II’s performance as a new AI version of Morpheus. I understand why you might seem to need to have a Morpheus character around, but it’s not as clear whether he’s entirely necessary anymore. Abdul-Mateen’s performance is so awkwardly comical that I was worried he was going to turn into a bee monster like he did in the Candyman remake, with even more unsexy results.

They replicate the “Training Montage” kind of fight from the first flick, where Morpheus / Lawrence Fishburne was trying to see whether Neo could transcend the limitations of the Matrix as foretold by divine prophecy, and all it shows is that Keanu, nearly 60, can still do some of his own fights, but that Neo also can throw down if he wants to. But what did it amount to? What does the character bring that any other character, including Niobe (Jada Pinkett-Smith reprising the role), couldn’t provide?

I have no idea how they even finished this flick during multiple lockdowns over the last couple of years. There’s a sequence set on a Japanese bullet train where people are wearing masks, so either they did it for crowd safety, or in a thousand years still in the Matrix itself, the coronavirus is still around.

I don’t know if they will benefit from having done so. Whatever complaints one might have had about the original movies, including the cavalcade of imitators that ensued, at least they told a complete, finite story. It’s not really clear why it needs to be told again, unless they’re going to dramatically change things up (as the ending implies, with what I hope is a real signal that other than just being a ‘cute’ couple, Trinity and Neo are ready to really change things up in a fundamental, deliberately non-gender binary way). I also sense the seething contempt underlying this screenplay, and I’m kind of amazed that Warner Brothers allowed this to come out as is. The villain, when he or it is revealed, literally talks about himself as having to answer to The Suits who have more power than him, and there is no fucking doubt in my mind that they’re talking about execs at Warner.

Or did they sleep through that bit?

There are probably a stack of missteps, or bad ideas. Bringing back Lambert Wilson to scream incoherently in his delightful French accent as the Merovingian wasted his time and mine. Thankfully there’s no Hugo Weaving, other than in footage from the earlier films, but there is a darling young Smith in the form of Johnathan Groff. He might not be a household name, but he did play Mad King George III in Hamilton, so if you remember his delightful song about killing the families and friends of the American revolutionaries in order to remind them of his love, you’d see how he could be a new fit for a Smith that still wants to kill people, but doesn’t have a super weird accent.

Priyanka Chopra Jonas assays a role most people would barely remember, but she plays Sathi who we last saw as a little “girl” AI who was inevitably going to play some kind of Oracle like role in these films. Why inevitable? I don’t know, seems really obvious. She’s really good, but she’s also supernaturally attractive, which is very distracting, since she’s a computer program.

It’s brave, and irritating, and great looking, and kinda nuts, and very unnecessary, but…

The Matrix Resurrections, like all resurrections, brings back something probably better off dead, but there’s still something there to be entertained by in the twitchings of a two decade old corpse

--
“After all these years, to be going back to where it started... back to the Matrix.” – it’s crazy, isn’t it - The Matrix Resurrections