The Man Who Sold His Skin 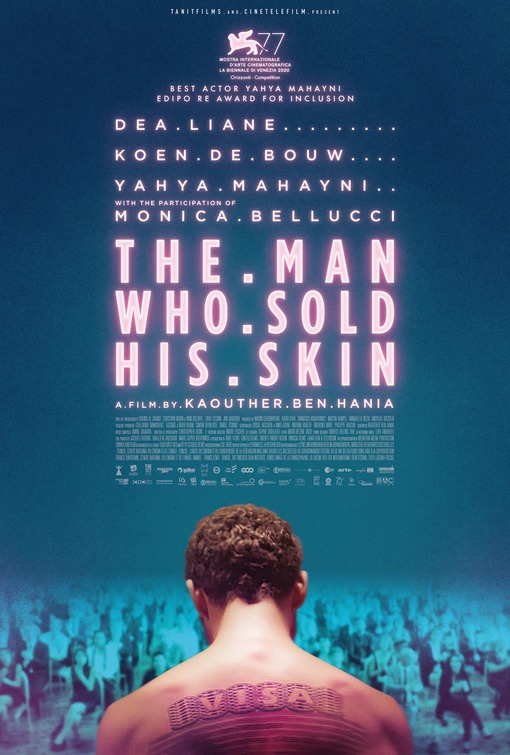 Every time I think of the title, I think of it sung by Kurt Cobain
to the tune of "The Man Who Sold the World". Try It!

Where this starts… and where this goes…

This is a pretty sly and smart flick, undone only by what I feel is like something of a cop out ending.

I didn’t know these things before watching the movie, but I know them now – this is kind of based on something that happened, which itself was ‘inspired’ by a Roald Dahl short story called Skin.

Skin I remember, because I read Skin when I was a kid in Tales of the Unexpected, and it stuck in my head ever since, because of the economical brutality of it: a chap has an exquisite tattoo on his back, needs money, someone promises to take care of him like he’s a pampered poodle, but next thing you know the skin is on a gallery wall somehow.

This film begins with two curators being ordered around by a guy with way too much mascara on, getting the position of the frame right, only for the camera to close in on the painting itself, showing that it is human skin.

So, the film starts at the macabre ending, and we’re to wonder how this ever happened.

The purpose of Dahl’s story was to shock, to disturb, to give someone a wry chuckle. The purpose of this flick is very much something different, seeing as it’s by a Tunisian director, with Syrian leads, set during the Syrian Civil War and the rise of the Islamic State, and most of it transpires in Belgium.

Belgium? How many good flicks other than In Bruges are set in fucking Belgium?

Well, there’s this one.

Sami Ali (Yahya Mahayni) loves a woman, called Abeer (Dea Liane), but her family have promised her to some Syrian jerk who works as a diplomat in Belgium. Bashar Assad’s forces are randomly killing bunches of Syrians, you know, just to keep them in line, so her family think it’s safest for her if they marry her off and send her to Europe.

After all, nothing bad has ever happened in Europe. This is all happening at the same time where streams of people, humans, families, are fleeing in order to survive, at a time when Europe is saying “fuck off we’re closed” to refugees. This is a conflict that will see millions of people die, and the rise of another totalitarian regime which makes life even less fun than death.

And Europe’s got it’s fucking fingers in its ears, eating its gruyere cheese and sipping beers made by Belgian monks the whole while.

Sami loves Abeer so much that, when they’re on a train together, feeling exultant joy, he bellows “this is a revolution!” at the passengers before saying other stuff about how they should get married and have a dance. Some jerk films this on his phone, despite looking so old that there should have been a preparatory scene where he asks some young person nearby how to bring up the camera app on his smartphone. Sami is arrested, because it’s one of those places where you can’t say shit about anything without ending up fucked.

Sami flees Raqqa for Beirut in Lebanon, and things aren’t that great for him there either. He keeps trying to Skype Abeer, who’s now in Brussels, I think, and she’s polite and stuff, but she’s still married. Leave her alone you passive-aggressive jerk. You’d think circumstances would be better in Lebanon, but they’re not really that much better for him there, but at least the authorities don’t want to kill him. He’s looked down on as a Syrian refugee. He and a mate take to sneaking into gallery openings for the free food and booze, and it’s there that he comes to the attention of The Art World.

I find satires about The Art World funny, in that I find the idea that The Art World still needs satirising is hilarious, even though there’s nothing funny about it. This is my point: when was there a movie, tv series, novel or any form of art that you can think of that has ever portrayed The Art World in a positive light?

I can’t think of a single one. But just this last year I can think of a bunch of flicks that satirise the sheer awfulness of the art scene, as if we forgot, or as if none of us have ever gone to a gallery opening only for the free food and cask wine.

The most famous artist in the world decides he’s going to make an artistic statement: tattoo a massive version of a Schengen visa on Sami’s back, and then essentially enter into a form of indentured servitude. Sami is to live comfortably in a five star hotel, eat caviar whenever he wants, but he has to appear at the gallery whenever they say, and be displayed in the Trumpian houses of the vulgar rich whenever they so demand.

It’s literally the only way Sami thinks he could possibly get to Abeer. He’s less interested in personal safety and not dying, unlike all his countrymen and women back home The creepy artist with the too much eye makeup is like a Jeff Koons / David Hockney provocateur type figure, and he doesn’t really see Sami as a human person. He’s just a delivery system, a blank canvas that happens to be able to talk and walk around and complain about its treatment.

He also jokes about giving objects immense value just by signing them, just like he can somehow give Sami more value than the world attributes to him just by putting his signature on his back.

It’s so rude when your artworks have opinions of their own. Sami is…uncomfortable with his existence, and stuff isn’t getting any easier with Abeer and her jerk husband. The parallels with what people endure through people smuggling and sex trafficking are not lost on Sami, or on other Syrian refugees who see in Sami another level of exploitation. The next level of it. A new way to commodify people, reducing them even more to their uses.

It’s not subtle. Jeffrey Godefroi (Koen De Bouw) the artist jokes about being Mephistopheles, as in the actual devil. And the devil needs disciples, so most of the artist’s dirty work is done by Soraya, played by the world famous Syrian / Lebanese / Belgian actress Monica Belluci.

Somehow, despite being the literal pimp that steals Sami’s passport from him, she somehow has some sympathy for him, but she, like everyone else around Sami, including his ex Abeer, wants what they can get out of him.

Despite being a bit of a jerk, Sami is an endearing and almost charismatic main character. There’s a mixture of passivity and resentment in a lot of the stuff he says and does, but it’s shocking how powerless he is in the face of the things that happen around him. He has so little self-determination in any of the plot, one which less is satirising The Art World and more a world that treats refugees so appallingly, when it isn’t killing them for the dumbest of reasons.

I felt pretty caught up in the story, even wondering whether there was something to feel invested in with regards to the love story, even when the grim beginning seems to be preparing us for the direst of endings.

The ending kinda walks back the macabre denouement we think we’re coming to, and while I felt some relief for these crazy kids, it felt somewhat out of step with the serious themes it’s been illuminating up to that point. And granted, the almost absurdly contrived ending has some groundwork along the way before it happens.

I’m not going to spoil it, because, wow, the wonders of modern technology. The Man Who Sold His Skin is less an indictment of how the art world works and more an indictment of what the world does to people, declaring some as worthy and others as un-people unworthy of kindness or decency, exploiting their need for safety and visas, in exchange for the cold hard cash.

In a lot of ways it’s kind of a brilliant flick by a young Tunisian director, who knows exactly what she’s doing, even down to the strange parody of heist films she homages in the scene where Sami is meant to be seated and motionless as part of the exhibition.

8 times I’m not sure my skin would be worth that many Euros, but there is way more of it than Sami’s out of 10

--
“Because in the times we are living, the circulation of commodities is much freer than the circulation of a human being. Thus by transforming him into some kind of merchandise, he now will be able, according to the codes of our time, to recover his humanity and his freedom. Now, that's quite a paradox, isn't it?” – yes, it’s fucking hilarious - The Man Who Sold His Skin