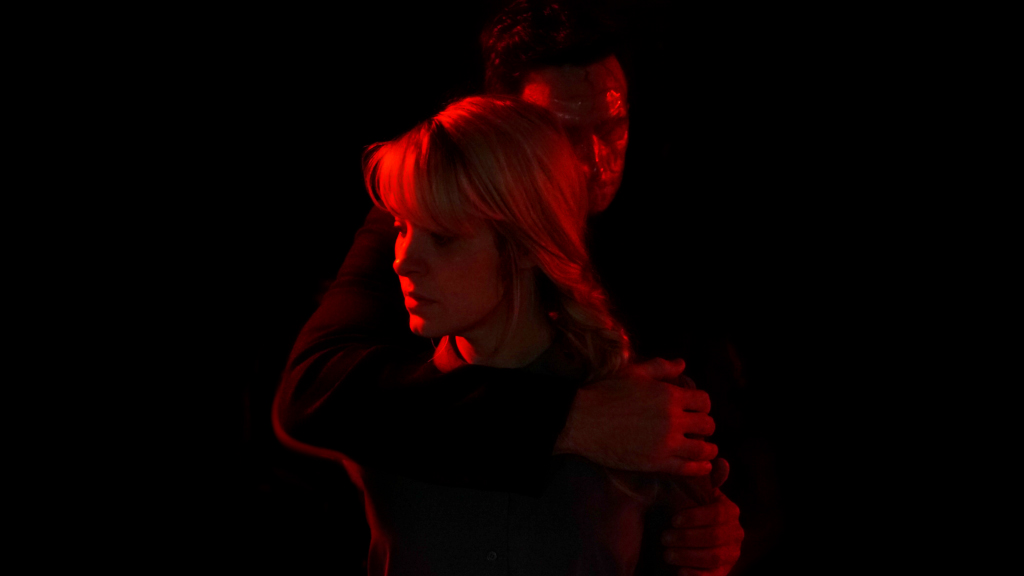 Luck ain't got nothing to do with it

I have, this past year, sat through so many takes on Groundhog Day that it was inevitable that there would be a horror take on it as well, and here it is.

May (Brea Grant) is a self-help author whose books seem to have the message that you’re on your own, no-one else is going to help you (including her) so get your shit together and look after yourself.

Why anyone would need to buy multiple books to realise such an obvious but cold fact is the only real mystery here. Her books don’t seem to be selling that well anymore, which, granted, means she needs to shift her message. She takes her box of remaindered copies to her car in some underground garage, and something happens, but the camera cuts away.

Later on, in the middle of the night she awakes to noises downstairs. Some man appears from nowhere and attacks her and her husband. She is really freaked out, her husband less so, who bizarrely seems to think this has happened forever, and will happen again. People are hurt. The assailant disappears. The cops are…unhelpful.

And the whole process repeats itself again and again.

Is it a loop? Is some supernatural force at play? Is May hallucinating everything? Is someone terrorising her, gaslighting her? It seems like people are dying, like people are being severely hurt. There’s blood on the carpets and the walls. But no bodies. Whenever she is lucky enough to stab, bash, throw down the stairs or otherwise do stuff to The Man (Hunter C. Smith) that would otherwise kill a mortal human being, no body is ever left behind.

It’s…perplexing. She is convinced something terrible and strange is happening to her, but the world doesn’t seem to agree. The cops especially are baffling. They return, every day and night, to the same house where windows have been smashed in and blood has splashed all over the place, and they seek to placate the alleged victim without believing or helping her in any way.

Cops can’t help you; you’ve got to help yourself.

But Ted (Dhruv Uday Singh) doesn’t seem to be the asshole in this interaction. Also, May keeps hassling his sister Sarah (Kausur Mohhamed) as to “Where’s Ted, why isn’t Ted taking my calls, is Ted fucking around” etc, and Sarah is nothing but supportive and understanding towards both of them.

May notices a scar on Sarah’s back, a long scar. “When did that happen?” she asks. “Oh, some time last year, it’s nothing” and the subject is conclusively changed.

What is going on in this world? Everyone seems to be hiding something from May, but also May doesn’t seem to completely be in synch with what’s happening around her. It’s nightmarish in that there’s often a dreamy, erratic or surreal quality to what’s happening. What kind of world is this where women can be attacked all the time, be horribly wounded and traumatised, or killed, and yet everyone else just keeps chugging along like nothing’s happening, and it was probably their fault anyway?

The title of Lucky arises when a police detective tells May she was lucky something worse didn’t happen to her. You’re lucky when you’re stabbed etc, but also that some guy terrorising you didn’t stab you more. Lucky? How the fuck is that lucky?

Yes, what kind of world would allow something like this to happen endlessly, in a horrifying loop, over and over again, to women the world over?

Brea Grant plays the main character here of May, but she also wrote the screenplay. She has been in a stack of horror flicks, a stack of genre TV shows, written a ton of scripts, even directed some movies, as well as written graphic novels and a bunch of other stuff too. She is immensely talented, and she wrote the screenplay here, so, in conjunction with the director Natasha Kermani, we have to assume they are telling the exact story they want to tell. So if anything is confusing, confronting, frustrating or stunning in this flick, it has to be because it was their intention for it to be so.

There are millions of horror flicks. Most of them, since the dawn of cinema, have tried to tap into our fears. The fears the flicks try to tap in to change over the decades; some of them are primal, some are more rarefied fears. I can tell you without having to do a statistical analysis or graphing my results that if you put all the people murdered in horror flicks over the years down on paper invariably you’d find that something like 90% of all the characters killed in horror are women.

Why do I bring that up? Well, this is going to sound baffling but I’m not bringing it up because I think it’s part of the film’s point. Lucky is not taking the horror genre to task for its incipient and insidious misogyny over the last century or so.

The mechanism, the reality of what is happening to May is explained in a way that explains or spoils nothing, in a scene that is shocking not for what happens, in terms of the graphicness of the depicted violent or anything, but for what it’s saying.

All this time that May has been attacked, and defended herself, and exhausted herself fighting off the same guy who appears and disappears, we’ve never gotten to see his face. A face is an identity, I guess, it’s our identity. The face of a person you can describe means you could in theory identify the attacker. That person, or the image of that person can be used by the pigs, I mean, sorry, the cops to potentially match an image with a mug shot, and then you have a name. Members of the public could recognise the face and tell the authorities.

But what if the attacker’s face is that of all men? Every man who contributes to the misogyny women face in countless countries and countless homes across the world? What good does identifying the attacker do when you already know the attacker, and the system doesn’t protect you from them? It’s all well and good to say women must defend themselves, because the cops and the system ain’t going to do it, but honestly, how many men would have to die in order to changes things?

Because no matter how many women die at the hands of men, known or unknown to them, it doesn’t seem to prick the collective conscience or change the architecture that surrounds their daily existence, and everyone else chugs along like normal after mumbling something about thoughts and prayers and what a shame it was that it happened, like it was an avalanche or some other natural disaster, rather than men make awful choices in a world that abets those awful choices.

And we keep watching it on our screens, as entertainment, as news tragedy, as transgression, and still it changes nothing.

For a moment’s context, I was watching satellite news on the weekend with my father, and there was a story about a woman who’d been murdered by her partner on the island of Rhodes. This was a morning news program, and people were sending in emails or messages to the hosts about their feelings to do with what had happened. It’s important that people’s feelings are listened to.

What need do we have in the real world for satire or horror films if real life is so much more fucked up?

This is a deliberately frustrating movie with no clear ending or clear catharsis for the main character or the audience, but one could easily argue that a pat answer or a literal ending would dull the powerful message the makers tried to construct to illuminate this idea in such a painful and uncomfortable way. It indicts all of us.

Alternatively, because of the deliberate storytelling choices (as in, having scenes where people mechanically repeat platitudes to May in a mechanically repetitive way, or the perfunctory manner in which much of the violence occurs – since the action itself isn’t the point), it’s pushing the audience away further by not giving a horror audience what a horror audience wants. This will definitely frustrate this flick’s meagre audience (on horror streaming service Shutter) even further, but fuck them anyway.

We don’t do enough. We must do more. It shouldn’t be like this. Women shouldn’t have to live this way, whether it’s at the mercy of the Taliban, the Texas legislature or an Australian Parliament happy to cover up for politicians and their hangers on committing rapes and never enduring any consequences for it. Or in suburban homes, at the mercy of their partners, or some collective unconscious immortal threat that cannot be stopped permanently, but at least for a while.

Lucky is a pretty powerful argument without an answer, and it’s a pretty bold film in its way, and I commend the people involved. The last time a horror flick made this argument it was with the superb The Invisible Man, but that probably had 100x times the budget that this does, and had a far more conventional story line compared to something this metaphorical