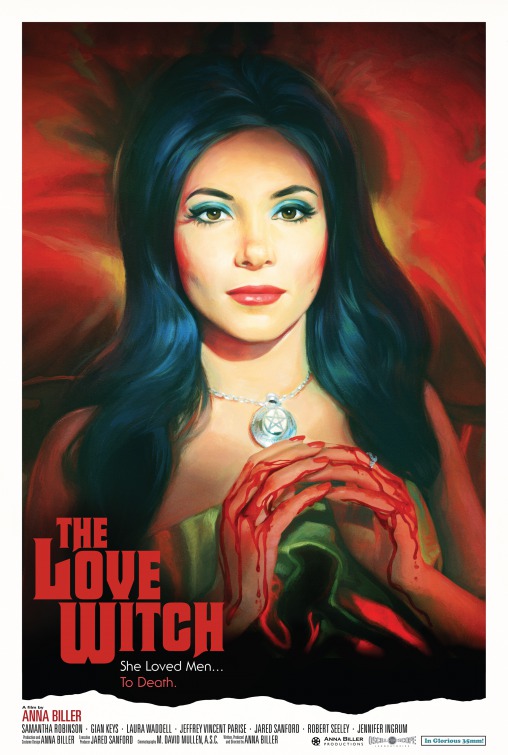 Sure, there's a lot of red in the flick, but, yeah, better Dead than Red

What… what in the name of unholy fuck was that about?

I did read some very positive reviews of this flick late last year, very keen appraisals that argue passionately and persuasively about the merits of The Love Witch. This even made some people’s Best Of lists at the tail end of 2016. I even got to read a glowing review in The Age, the local paper of record, which made me think “Hmm, sounds great, must check it out”.

And now? Now I feel this dull rage, like I got ripped off by someone who wasn’t even running that good a scam on me, yet I got played anyway and I lost my watch, my wallet and my glass eye in the deal…

Of course you can’t rely on other people’s opinions in order to form your own opinions about anything: yes, People are People and have Different Experiences and Such when they See the World in All its Glory. I know all that: I’ve seen identical twins watch the same movie and violently disagree over their different takes on it while walking out of the theatre, which even might have resulted in a punch up, no shit.

At the very least what I can say is that the merits a fair few reviewers and / or film critics saw in this film are completely lost on me, even as I can nod my head and comprehend some of the themes and points the film seems to be making. Where I say “seems” I could just readily admit that I have no freaking idea.

I even read a critic I deeply admire and respect, being A.O. Scott from the New York Times, whose worst review is probably greater than a thousand of my best, call this a subtle comedy.

Are you fucking kidding me? What love potion have you been snorting?

The acting performances, I guess, are secondary to those who praised this flick, because otherwise I cannot understand how any of it could be seen as even barely competent. I can’t say whether the lead actress Samantha Robinson as Elaine is in any way what one can actually call an actor, or whether she was directed to be this way on purpose, in which case maybe she needs Robin Williams to patiently repeat to her that it’s not her fault again and again until she believes him.

Let me put it this way: she’s not even convincing when she’s narrating, and she’s narrating a lot. Narrating! I don’t expect everyone to be Sir Ian McKellen in voiceover or nothing, but she even delivers voiceover like she wouldn’t be convincing on the other side of the counter at a passport office.

If she told me that rain was wet and alcohol was the nectar of the gods I would have a hard time believing her. As the main character and witch of the title, she is onscreen for about 90% of the film, quite often in staggered levels of undressedness, but sadly that doesn’t improve my opinion of the film in the slightest. She is a strange creature, indeed, though it has to be said her outfits and costuming are stunningly gorgeous, much of the time. From a costuming and set design perspective (all by the director, I believe, who clearly excels at set and art design, and clothes, but not directing, oh god no, not directing) it’s a marvel, and many scenes look gorgeous. A surreal scene at a tea shop, or something like that, is particularly florid and over the top, and looks like something out of My Fair Lady.

But then people talk to each other, and interact with each other, and it’s just painful, awfully painful to sit through. It’s definitely meant to be set some time around the late 60s early 70s, but there’s no effort (budget, probably) to actually make anything outside of the clothing or the awkward way they talk look like a period piece. It may have a Technicolor look, and was clearly filmed on actual film as well, and it may be a deliberate attempt to make a movie from the past (just like the award winning La La Land) in order to recall the past, but I would trade any hour of this flick for a single second of La La Land.

Elaine is on a quest. She’s on a quest for true love. She believes that she has reshaped herself (after the failure of her previous relationship, which clearly ended in murder) into the perfect woman that any man would want to love. She tells us all this, and another woman whose life she enters, in case we have any doubts as to her motivations. If she sees a hot guy, she has the power, because she’s the Love Witch, to make him hers.

And she does so. She clearly is into the Wiccan stuff, but this flick shouldn’t be mistaken for an occult / supernatural thriller or nothing. There’s no indication that she has any actual powers. She just has some 'magic' love potions that she makes, and a winning manner.

She sees a guy on the street and instantly thinks: This man will be the love of my life. Within seconds of seeing her, this jerk Wayne (Jeffrey Vincent Parise) decides they need to run away together. It’s all because of her long black wig and the incredible amount of blue eye shadow she can wear without looking at all trashy.

He whisks her away to his cabin in the woods, and, after he drinks some of her patented Love Potion No. 9, he basically loses his mind over Elaine. He at first embodies everything she wants in a man: he’s handsome, he thinks women are shit and has treated them like playthings for decades, and he has a house in the country. And she offers, or at least pretends that she wants to give him all the things a man might want from a woman, as far as she knows: nudity, sex, food, and a simpering voice that tells the man that she really understands him, that he really is the best and definitely has the biggest dick she’s ever seen, no doubt about it.

She thinks she loves this guy at first, based mostly on just what he looks like, but once he starts expressing feelings and emotions (something which she doesn’t associate with her idea of what a man should be like), she is basically disgusted with him. The illusion shattered: she is ready to move on. Unfortunately for Wayne, this isn’t going to be a pleasant separation, but it is going to be a final, definitive break.

In short, she has an utterly simplistic idea of men, one which is as sexist and dehumanised as the feeble idea of women the male characters in the flick also hold. It’s unarguable that this is an avowedly feminist flick with strong feminist themes about love, sex and relationships. There is a lot of talk about men and women’s roles in relationships, and their approaches to sexuality, and the differences between attraction, desire and love.

It’s just that, I don’t care. I very much care about those issues, and about art that addresses these themes and expounds upon them in thoughtful or engaging ways. It’s just that nothing about how this flick approaches these themes or realises them on the screen appealed to me in any way, mostly because the performances and dialogue and almost everything that happens so woefully underserves the flick’s ideas. Instead they’re drowned in Elaine’s arch and completely unbelievable performance, and this staggeringly amateurish occult bullshit, complete with a coven of witches led by a pervy creep, none of whom convinced me they were anything other than the actual remnants of the Manson Family.

I relate these elements not because I want to spoil them for a potential viewer, but because I want to dissuade any potential viewer at any cost from watching this supposed feminist parable. The story essentially rinses and repeats the same actions (Elaine killing a bunch of guys when she becomes bored with them / when they don’t live up to her unrealistic and inhuman expectations) because there really isn’t anywhere else for this story or its stilted performances to go.

Early in the film, as she drives to a new town, she meets a traffic cop who, within the space of a week, somehow became a cynical, manly, macho, arch masculine detective who’s investigating Elaine’s trail of destruction. This chap Griff (Gian Keys) is not the kind of guy who’s going to weep openly in front of a woman, or ever be that demonstrative, or ever agree to lower the toilet seat.

He’d probably be okay with slapping a woman if she gets too hysterical. He probably (we never get to see it, alas) has a cock as perfect and square as his chiselled jaw. It probably looks a bit like Thor’s hammer inverted. You can just tell.

He would smoke with and then punch the Marlboro Man in the face. He’s not the kind of guy who’s going to fall head over heels for a love witch or any other kind of witch for that matter. There’s no doubt he’s powerfully hetero, oh no doubt at all, but he also looks like women are just a means to an end for him, and not one he particularly cares for, and he’d probably be far more comfortable playing golf and sexually harassing women with Mel Gibson.

His manly voiceover would indicate the same. He’s about the only almost reasonable character in the flick, and yet his mere presence leads to a most surreal and unconvincing section in the woods where Elaine and Griff stumble upon a Renaissance Faire which morphs into a bizarre pagan wedding where all the witches happen to be waiting, ready to give Elaine’s heart what it most desires.

And Griff seems to be playing along with it all, but he ain’t buying it. To him, Elaine is just a poorly acted goofball who’s nice enough to look at and maybe have sex with, but nothing to lose your heart over. But really, it’s hard to see why she would be alluring to him, since she was totally unconvincing to me. Her blindness to her own flaws as a human being, which is really a depiction of a severely psychotic individual who doesn’t have the capacity for rational decision-making who doesn’t even acknowledge that she’s killing people all over the place, kinda undercuts any of the profound feminist thought that apparently underpins the unfolding drama.

I don’t buy it at all. Like Elaine herself, The Love Witch is a joy to behold, at first, but then the hollowness inside becomes too profoundly off-putting for it to be that interesting, and in the end, the flick will probably murder you.

--
“Giving men sex is a way of unlocking their love potential” – Elaine, it really, really isn’t – The Love Witch