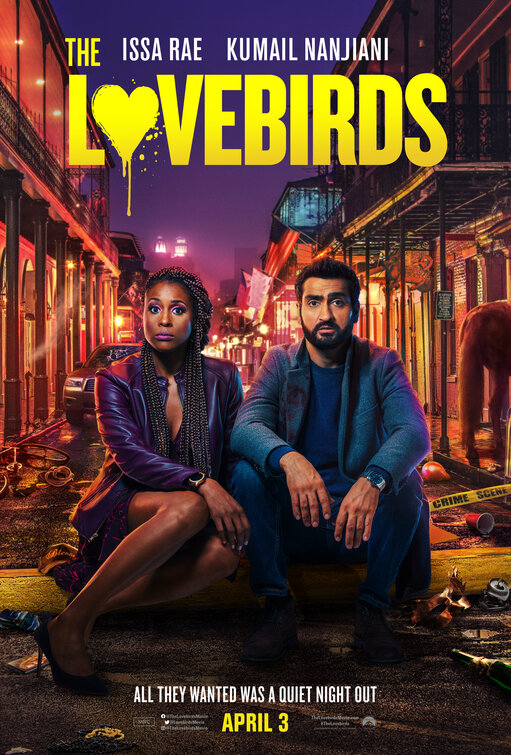 Two attractive people, out for a fun night. What could go right?

I like me some Netflix romantic comedies. Honestly, the best, or should that be “best” Netflix produced or Netflix exclusive (this one more so because the plague interrupted its intended cinematic release) flicks that come out tend to be of the romantic comedy persuasion. Stakes are so low, budgets don’t need to be that high, it’s mostly (if we’re lucky) two or more charming people being charming for 90 or so minutes until it ends with a joke and a kiss and the implication that there’s a happily ever for at least the next few years after ending

The Lovebirds isn’t threatening to break any new ground. It’s not too dissimilar to a bunch of other flicks that has a bored or estranged couple go on a night of adventure that rekindles their love for each other and life in general. Date Night with Tina Fey and Steve Carrell, and the more recent Game Night with Justin Bateman were examples of this, and not only united by having “Night” in their titles.

The exotic twist, at least from an American perspective, is that the leads are an African-American and a Pakistani-American, in a flick that plays out exactly the same way as those kinds of flicks where two people who don’t like each other eventually do after adventures ensue.

But, c’mon. Kumail Nanjiani is generally pretty funny in everything he’s in and Issa Rae is glorious (best known for her tv series Insecure) in everything she does, so surely forcing them together towards a path that threatens mutually assured destruction is a recipe for success?

Well, kinda. They are individually great. I don’t know that I bought them as a couple, but that isn’t the only criteria. I never bought Harry and Sally as a couple in that classic whose name escapes me about when they meet each other, because Billy Crystal (ew) with Meg Ryan (ah) shouldn’t work in this or any other parallel universe, but that was part of the fun.

This doesn’t have those same obstacles, but it does have its own unique obstacles. When the flick starts we’re seeing these people after their first night together, so, The Day After, which is kinda sweet and kinda awkward, and we see them fumble towards some kind of happy amazement. They really go all out to convince us that these people are amazed / fuckstruck by each other after one night. All this happens just over the opening credits.

Then it cuts to four years later, where they are sick to fucking death of each other.

I guess to some people four years would seem like a lot, and to others it seems awfully brief. All we can see with this couple is that either tedium has accumulated over the years, or maybe that they weren’t really compatible in the first place. The man in the couple, Jibran, seems persnickety, fussy and whiny. Leilani (Issa Rae) seems exasperated with his persnickety fussiness and irritated by his constant criticisms and corrections, like he’s so fucking great. They’re about to go to some dinner party, but they’re fighting about a) their relationship or their individual perceived limitations (or each others), b) reality television in general, and whether they’d be a couple with a chance on The Amazing Race and c), whether Jibran is a shitty documentary maker, or whether Leilani’s co-workers are shitty.

Really, they’re fighting like people who have no affection left for each other. In the middle of driving to a dinner party, they ask each other if maybe they should separate. And they both agree.

That’s when, as is without doubt the most perfect moment, Jibran hits a guy on his bike with their car.

At first you’re thinking “wait, are they fucking with the conventions of a romantic comedy by making us somehow still care about a couple who commits a hit-and-run but doesn’t seem too fazed by it?” but when a cop forces his way in to their car and urges them to pursue the escaping guy on the bike, you might feel relieved for a second.

Then, of course, the “cop” with the moustache kills the guy on the bike, with their car.

So, an African-American woman and a Pakistani-American man, in New Orleans, are pretty sure they aren’t going to be believed by any law-enforcement types that they didn’t kill the bike guy on purpose.

I wonder, looking at the news coming out of America at the moment, this being June of this year of plague known as 2020, why they would think such a thing?

In a funny way, this is the superficial, comedic version of what Queen & Slim tried to a bunch of months ago, positing an America where people anticipate not getting a fair shake from the cops or the legal system because of the colour of their skins, and trying to do what they can to avoid becoming the next victim of police brutality or being in jail for the rest of their lives. After all, they did kill a white guy, and while all lives are equal, some lives are more equal than others.

The difference here is that the central couple are constantly cracking jokes, bickering, but also following an unconvincing and implausible trail of breadcrumbs in order to somehow solve the crime before the cops catch them. It’s all mostly played for purest comedic value, with varying degrees of success. There are also a bunch of costume changes, which I entirely liked. If it’s a staple that there’s an escalating set of costume changes in a romantic comedy like this, then this is a great variation on it. Of course they have to end up in black tie evening wear at some stage, but the unicorn onesie and cut rate Middle Eastern used car salesman disguise looks were inspired.

Amidst the bickering there are these minor, tiny admissions that change a central element of their beefs with each other. Jibran is clearly, CLEARLY insecure about a guy at Leilani’s work called Keith, to the point where he has to keep running him down and criticising him without any justification that we can see or imagine, and of course the film forces the lead characters to require Keith’s help at some stage to deal with a technological issue. In the midst of Jibran being an unpleasant arsehole to smooth Keith, Keith drops into the conversation that Leilani thinks the world of Jibran, and is always saying how great he is.

Huh. All it takes is a compliment from someone you’re jealous of to make all the jealousy fade away into the cosmos, and to make you appreciate your partner again.

Because it’s one of those “crazy nights unlike any other” plots, the central couple go from bars to bizarre barns where they’re tortured to even stranger sex cult meetings to the apartment of a bunch of fratboys (why fratboys would have an apartment in town, when presumably they’d be more comfortable back at the actual “frat” on campus is never explained and no-one cares other than to joke about the poor morons prior to their meeting their maker). All this trouble and strife does not have the purpose of righting wrongs, or getting justice for the poor initial guy they just call Bicycle, or even really to save their lives, since we’re pretty sure they’re never at that much risk (except of maybe realising they’d both be better off with someone else, maybe even Keith – I’m just saying). But we know, We Know, it’s all about giving the space and giving them a really tense situation in order for them to put aside their day-to-day bullshit and the limitations they put on each other and themselves in order to appreciate each other anew, and realise that they do love each other.

And they do lots of that. It’s funny that the script has time for Jibran to “grow” as a character, but they don’t really have anything similar for the Leilani character. It’s kind of like an admission that she’s awesome, it’s just that Jibran is a bit of a dick, so that if he stopped being so insecure and started being more supportive, and more sure of himself and his “documentary maker” skills, whatever the fuck they are, he’d be slightly more worthy of a queen like Leilani.

Yeah. Sure. I can buy that, but only at a bit of a discount.

It’s hard to really get emotionally invested in the couple or the film, really. Previously this director and Kumail collaborated on The Big Sick, where Kumail essentially played himself in the story of his relationship with his now wife Emily V Gordon, and what happened early on in their relationship. That was, well, a completely different film to this, and it’s unfair to compare the two, because they’re trying to do completely different things. That one wanted to make us feel something, and laugh a bit. This one needs us to laugh a lot in order to forget or gloss over that the story makes nil sense, and that Leilani is way too good for Jibran, let’s be honest. How charming both are doesn’t obscure that fact.

They do, however, have a good energy together, and it seems like a lot of the stuff they argue about or improvise serves the idea of their relationship well. One of the funny / bizarre arguments they have that carries on through the film regards spontaneity when it comes to initiating, um, “adult scenes” with one’s partner, and how you can’t schedule something like that because that takes the fun out of it. They argue all over the place, but one of the central elements of the strange plot is that a whole group of rich presumably mostly white people have an entire underground (but super classy, don’t doubt for a second) orgy club where they get together wearing masks and do… whatever it is that they actually do in full view of each other, which is all meticulously planned and scheduled with an incredible amount of organization behind it!

And when Leilani and Jibran in disguise happen upon this gladiatorial spectacle for the ages they express some grudging respect for it and not a little curiousity. If this sounds overly smutty I assure you it’s not that kind of film, but it is a funny idea that’s extrapolated out from the problem couples face long term with familiarity and routine snuffing out the flames of passion, or so I’ve heard.

It’s only one of the ideas fleshed out, because they certainly don’t pursue any of the political aspects of it, which, watching America on fire on the news these last few nights, probably is a good thing. There’s only so much reality we can take all the time, each and every day.

Which is why fantasies like The Lovebirds can be an entertaining time out or a pleasant diversion from our terrifying but still mundane lives.

--
“This is some Illuminati bullshit” – Illuminati Confirmed – The Loverbirds.