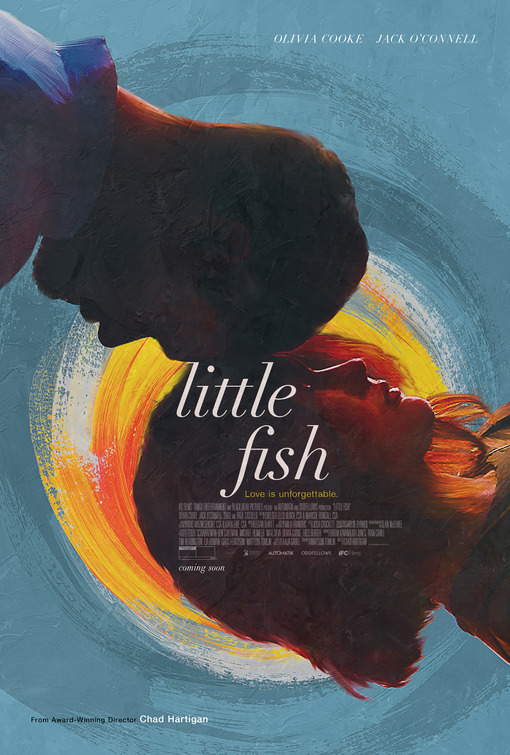 Just to be clear, this isn’t a review of the really great Australian flick from 2005 that starred Cate Blanchett and Hugo Weaving of the same name – this is a recent flick called Little Fish, and it couldn’t be more different from the earlier flick if it tried.

This Little Fish is more of a romantic drama about a young married couple, in a world where a condition or a virus takes people’s memories away. I know that sounds just like this world, like with traumatic brain injuries or early onset dementia or a bunch of other conditions that rob people daily of parts of themselves, but the difference here is that it’s happening to hundreds of millions of people of all ages at the same time.

People instantly forget how to do things they’ve known how to do their whole lives. People forget themselves, and the people closest to them, instant strangers. Some memories stick around longer, especially sense based ones, and there’s no rhyme or reason to it, and no way to protect yourself from it or to stop it.

This sounds like the prelude to yet another flick about societal collapse and the apocalypse, but it’s nothing like that. Its scale is small and intimate. We see the changes this affliction brings about, but mostly we’re seeing what happens to two people and those closest to them.

Emma (Olivia Cooke) and Jude (Jack O’Connell) are the main couple, and they are married, and they’re starting to see the effects of the so-called affliction on those around them. And when it starts happening to Jude, forgetting little things, tiny aspects of their shared history, Emma tries to keep him present by endlessly replaying their past, to see which details he still possesses and which are gone.

Can they be retained? Can they come back? Can you still love someone when you’ve forgotten all the moments that lead up to falling in love with them? Is love based on memory, or can you still feel the feeling even if the memories are gone?

Well, the romantic part of my soul, which is probably the part that responds to films and art like this the most, of course yearns for these ideas to be eternally true. Watching Emma and Jude (guardedly, in his case) endlessly remembering, falling in love a hundred times through a hundred moments, the details of which keep shifting, is beautiful. A beautiful, heartfelt approach to something so devastating.

I so want it to be true. So many reviews referred to Eternal Sunshine of the Spotless Mind, and there are aspects that have a tiny similarity, but I would argue only so far as the ultimate point that film made was that two people who kinda love each other could potentially meet and fall in love again even if they’d erased every memory of the other using made up technology.

Little Fish uses a similarly non-chronological approach in order to make a scene we think is happening at a certain point in their relationship, being revealed as happening at a completely different time, with its point I guess being that there is hope. Hope that even with everything deleted, on some deep soul level you’d still be able to somehow find that person and fall in love with them all over again.

There’s a comforting melancholy joyfulness in that, something which I am something of a sucker for, especially with the precious way everything is put together, from the lighting to the scenes in aquariums and all the scenes between them. The two lead performances are perfectly pitched, low-key and warm, neither wallowing in schmaltzy tragedy, nor pretending that it’s not devastating.

They work so well together in the before times, like two people who’ve just met and are stunned by each other, that the sad times hit even harder. Their close friends Ben and Samantha who play in a band together offer a sped up version of what Jude and Emma will eventually go through, so they know what’s coming.

Ben (Raul Castillo) has a moment on stage where he’s forgotten what he’s meant to be playing, which they try to combat with a tattoo on his forearm of notes and guitar chords. That’s an interesting detail: when they’re in a tattoo parlour, there’s a sign saying there’s an 80% discount for tattoos that are meant to be people’s personal details in order to help against the affliction.

It’s where Emma first spies the little fish tattoo of the title, which comes to have its significance for both Emma and Jude, and their story together.

Emma works as a vet, and the sadness of her job is on full display when, after a given amount of time, she has to euthanise perfectly healthy dogs, just because either their owners haven’t found them in time, their owners are dead, or their owners have completely forgotten they have dogs.

I admit I inadvertently let out a sob when one of those beautiful doggos is put down, it just seems so cruel (despite being done as gently as possible, which somehow hurts even more). And, like Jude’s memory, it’s only going to get worse.

Ben ends up pulling a knife on Samantha (Soko), wondering who the fuck this strange woman is, in his house. She sobs to Emma that she’s the one that had just handed him the knife as they were cooking in the kitchen together.

Emma is determined that Jude not end up in the same boat, and does what she can, but this is a global epidemic (sound familiar? Ugh), and her mum back in England has got it too, and Emma desperately wonders whether she can save Jude or her mum by travelling back, but probably not both.

In truth, probably none of them can be saved, be held on to forever, and then Emma herself realises that maybe she’s forgetting some details too…

Look, you have to be a particular kind of person to “enjoy” films like this. Sure, it’s well made, well acted, with a beautiful, melancholy score, but there are people for whom these kinds of details are like catnip, and those for whom this sounds like the worst possible concoction possible. I think it is beautifully put together and realised, and I got a lot out of it, despite a lot of things.

Despite having direct experience with people, now almost on a daily basis, who’ve lost themselves, who will never get back to where they were, no matter how much their loved ones loved them and wish things were different, who will never accidentally or through fate “meet” their beloveds again, and fall in love anew. But it’s the deep knowledge of the reality of the thing that makes me appreciate so much the hope, the yearning for love to transcend all that underpins this gorgeous film, that permeates every scene.

I loved it, but then I am a sucker for such sweet sorrows.

--
“All these little pieces…I find myself wondering how to build a future if you keep having to rebuild the past. They say you can’t forget feelings…” Little Fish