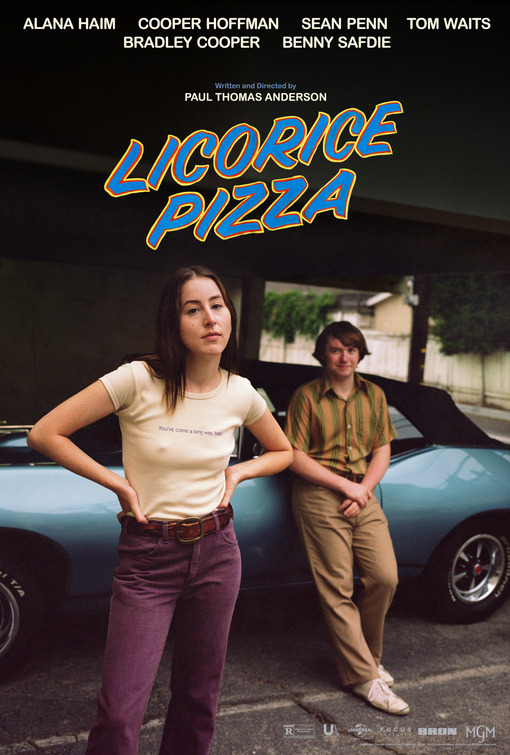 What, what are you looking at, ya jerks. Stop thinking things

I have wanted to like a film by Paul Thomas Anderson for a long time. I haven’t really thoroughly enjoyed any film of his since Boogie Nights. Parts of There Will Be Blood and The Master were compelling, but in no way did the flicks hang together for me, especially with their demented endings that undid whatever goodwill remained in my heart or head.

I tried watching Inherent Vice, based on, like all his books, an unfilmable novel by Thomas Pynchon, but I could not retain anything that was happening, and I was completely straight and sober, and yet I was still bamboozled, even though 90% of the plot is delivered in voiceover.

Licorice Pizza is an almost artfully disingenuously simple story with little connective tissue between scenes that only works if you like the performances of the central characters, being Alana and Gary (Alana Haim and Cooper Hoffman). If you don’t find them engaging, or even tolerable, this will be a well-filmed 135 minute exercise in exquisitely filmed torment.

I don’t remember the early 70s so there’s no nostalgia value for me, but all the same this is filmed to look not just like something from the American early 70s, but to look like it was filmed in the 1970s, with a similar film stock and ‘look’. It’s the kind of thing you expect from Anderson.

Does it ‘help’ to tell the story… I have no idea. Probably not. It depends on what you think the story is. I sat there for over two hours wondering about what I was watching and why I was watching it.

On one level, you could be forgiven for thinking the story is about a teenage boy called Gary (Hoffman) and a woman in either her mid or late twenties called Alana (Alana Haim). Gary is an awkward, goofy teenager, but he is insistent that he has a charming manner. As audience members, we don’t really see it, but some people in the film respond to it, and others don’t. He is variously referred to throughout the flick as a hustler or an entrepreneur, but he never really seems that good at anything.

Alana rejects his every advance, which is probably a good thing, since a relationship between the two of them these days would be illegal, I guess(?) And we never have it spelled out as to why she keeps hanging around with him despite being repelled by him.

The film really has the feel of a guy telling a series of anecdotes to another person, who has probably listened to those anecdotes a few times, but who at some point thought “I have no ideas for a new film; what if I string together a bunch of anecdotes from my mate who was there in LA in the 70s, and had a few crazy times?”

It feels like that, because I think that’s what it is – some stories told by a guy who started off tangential to Hollywood as a child star in a Lucille Ball tv series called Yours, Mine and Ours, and who hustled and nickled and dimed his way into trying to make his fortune, at the same time as rubbing shoulders with some truly annoying famous people, before eventually becoming a producer himself and having a hand in making a bunch of famous movies, but not in an explicitly creative role himself.

That is the guy that Cooper Hoffman is playing, a jerk called Gary Goetzman in real life. I don’t know how much of these stories are true, and I hardly think it matters. The only connection between the anecdotes is Gary, underage but determined, and Alana, always fucking around, but always wanting to help Gary out.

There is a bizarre set of scenes with a terrible jerk played by John Michael Higgins (who almost exclusively plays terrible jerks) who is married to a Japanese woman, and who opens a Japanese restaurant in Hollywood. Whenever anyone asks him a question for him and his wife, he puts on a godawfully racist Japanese accent that would shame Mickey Rooney in his grave, but speaks English gobbledygook to his wife. She then responds in Japanese.

They do this a number of times. Later on, he does the same thing, with a different Japanese woman playing his wife, but in his final scene when she responds to a question he admits “I have no idea what she said, I don’t speak Japanese”.

Why are these scenes here? Why are they anywhere? Sure, Gary would say “they happened, I thought they were funny, so I included them here” but fucking honestly… Cut them and the baggy flick would be less shitty and less baggy.

Most of the rest of the tone of the flick isn’t like that. Some sections are even breezy. There are scenes of people running, with such an appropriate soundtrack needle drop that PT Anderson prides himself on that you feel like you’re watching a film far more fun than it actually is.

There’s something about the characters that doesn’t sit completely comfortably with me, and that’s probably okay, as in, artistically, it makes all kinds of sense. People in life are generally far more complicated and ambivalent and all over the place that films can generally allow for. Sure, people in Jonathan Franzen’s books or Simone De Bouvoir’s character assassinations / novels can have a million contradictory thoughts, but those come across in a heap of detail that undergirds what character’s actually do or say or feel.

I never really had the feeling that this was a romantic movie, because an awkward teenage boy who thinks he’s the bees knees angrily glaring at a woman maybe 10, maybe 13 years older than him when she interacts with anyone else isn’t a recipe for charming romantic hijinks – it’s a recipe for a number of restraining orders. But Alana’s actions, also inexplicable, but at least forthright and entertaining when she’s yelling at people, don’t really justify anything, or explain why hanging around with Gary is a healthy idea.

Whether they’re trying to sell water beds to deluded fools, or trying to install them in rich people’s houses Alana is contemptuous and resentful about almost everything Gary says and does. And to his credit, most of what Gary says is dumb or falls flat. During a broadcast he promises Alana he’ll make a joke for her benefit, and it falls so flat, so awkwardly flat that you kind of feel sympathetic to the Lucille Ball-like character who starts berating and hitting him.

We never really understand why Alana keeps hanging out with Gary, except maybe loneliness. She maybe feels like at least if Gary is entranced by her, well, at least one person gives a damn, even if he’s a teenage boy. She either tries to help his various schemes through driving him places he can’t legally drive to, or she takes his advice on how to get roles in tv or movies.

Of course when a casting agent asks her whether she can ride a horse, speak Portuguese or do fencing, she says yes to all of the above, because Gary told her she should. When she’s asked if she’ll work topless she agrees as well, not having a problem with it.

But of course Gary has a problem with it, because she won’t deign to let him see her topless, but she’ll happily share herself with the world instead.

I see no contradiction there, personally, because Gary is so sweaty and so repellent, but she makes a decision, alongside some threats, that she makes in the interests of…what, preserving their friendship? Dangling the possibility of future hanky panky in order to keep him loyal now?

I don’t know, there’s so much I don’t know about women now, women then. She finds herself in all sorts of situations, including flirting with a very leathery looking Old Hollywood star Jack Holden, who I guess is meant to be William Holden, played by very leathery not-as-old Hollywood royalty Sean Penn, in a dull role. At least there’s a painfully long scene with Penn and Tom Waites as some director / producer carrying on like drunken pork chops, which nearly sees Alana come to harm.

Amidst all the anecdotes, well-worn tales of the almost famous brushing up against the actual famous, it’s the times when each of them thinks the other is in danger where the facades drop and they act out their no-bullshit, not fucking around concern for each other. When Gary is arrested because of being misidentified by the cops, Alana seemingly chases the cop car all the way to the station. When he thinks she’s come to harm of the back of Holden’s motorbike, he runs like a chubby gazelle. When either of them is in peril, they go running to each other. That has to count for something.

There’s a bravura sequence involving the early 70s gas crisis, the delivery of a water bed to the home of infamous producer Jon Peters, a delivery truck, Bradley Cooper playing the monstrous coked out maniac like the worst person in all of Hollywood, and everything going wrong that can go wrong in the exact worst sequence possible, which is put together sublimely, ending with Alana realising she’s hanging out with a bunch of fuckwits.

That one part of the film is great. I wish the rest of the flick was as good as that sequence.

Cooper Hoffman is just a kid, but he had a famous dad, a famous acting dad, who’s no longer with us. Maybe he, like Phillip Seymour Hoffman, will be able to put in dozens and dozens of great performances, conflicting and conflicted ones, thoroughly disgusting ones and transcendent, mercurial ones. He’s definitely not there yet, but there’s glimmers.

Alana Haim, most famous perhaps for being in the band Haim, with her sisters, all of whom appear in the flick, is a natural on the screen. She’s a natural at giving a whole different range of performances in a 1970s world that seems entirely set against her. She pushes back tremendously against this stupid world, even as she vacillates between figuring out whether Gary is the worst and most selfish goof in her world, or whether he’s marginally less dishonest that the other jerks around her. She has no ability to figure out what she should be doing with her life, and there is no indication that being with Gary is ever going to help that, and that makes perfect sense.

And yet they keep running after each other, even if it’s only to collide and fall over.

It’s a frustrating flick, but it has something, it’s definitely got something. Maybe it felt like three lazy episodes from some period piece drama about boring details from the 1970s no-one cares about any more, where the main performances are kinda messy, but the other pros on board dial it up as high as it will go.

Honestly, the whole bit with Bradley Cooper as Jon Peters, fucking hell, that jerk started off as Barbra Streisand’s hairdresser, and he ended up as the head of a film studio, despite being way more terrible than even a jerk like Weinstein, and he doesn’t deserve air time, but goddamn if Bradly Cooper isn’t chilling and hilarious as this maniac.