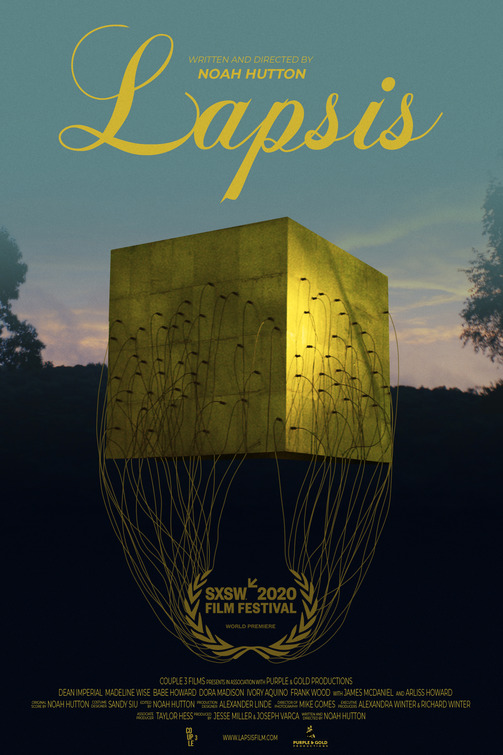 The Cube is good, the Cube is great.
We surrender our will, as of this date.

So…what is Lapsis really about?

I could tell you, but then you wouldn’t spend the 100 or so minutes listening to me that you could otherwise spend watching this strange, low-budget film.

This is exactly the kind of film people say they wish science fiction films were like: For those kinds of people who are bored of sci-fi becoming synonymous with explosions and supeheroics and world ending disasters, this is the exact kind of flick they CLAIM they wish more were made of.

And then within a few minutes of starting it, if they even hear of it, they’d switch it off and put on another fucking Marvel film. And I include Martin Scorsese in this. Well known for lamenting the lack of art and heart in the Marvel movie making production line, upon popping this on in his state of the art VCR, he’d pop it out again and immediately put on Captain America: Civil War muttering “I just love watching how Winter Soldier fucks shit up old school”.

Lapsis is low-key and fairly quiet, and it takes a long time to get to where it’s going. It seems like it’s a satire about Big Tech and such, but it’s really about the gig economy, and the ways in which the corporate world conspires to keep wages down and keep work insecure and perilous, and keeps workers isolated for its own benefit entirely.

This is set in the present world, except there has been one advance, and one other thing that’s gone wrong in the world. Regular, boring computers have been replaced with quantum computers. What do the new computers do that’s different? I have no idea. It’s not particularly obvious. There’s no difference except that when someone says “but the timetable said it’s okay to double park today”, and the parking ticket cop says “nuh uh, you should have used a quantum computer to see the timetable, which would have shown you it’s not okay. Quantum computer, quantum timetable.”

This is not a flick to watch even theoretically to find out anything about quantum computing, which is apparently a real thing in this, the apparently real world. What it means in the context of this film is, that a company, pretending to be many companies, but really it’s a monopoly, puts these metal cubes in forests, and engages trackers to drag a cable from one cube to another cube and attach it thereon.

What does the metal cube do? No idea. What courses through the cables? No idea. Why are they dragging cables through forests anyway and attaching them to cubes? We never find out.

It’s just something that people do, and it’s sought-after work. You have to have a medallion in order to get on the scheme. There are these devices like older phones which confirm your identity, tell you when to walk, tell you when to rest, and chastise you if you vary from the path.

All the while when you’re trying to trudge through the fucking forests and gulleys and such, an automated creepy crawly machine is also following behind you. If it gets to the place where you’re meant to be going before you, whatever moneys you were promised evaporate. If you tamper with the machine, security goons swoop in and hog-tie you, dragging you out of the forest.

There are points systems, hierarchies, reasons to obey and plenty of disincentives not to stray. If you’re injured on the job, they don’t care, and they don’t help you.

Who is “they”? It’s the company, in this instance it’s CBLR, but, really, it’s meant to bring to mind Amazon, every rideshare app, every New Economy start up that argues in courts that its employees are not employees, and nothing is ever owed to anyone, and did you check out what our current stock valuation is at? It’s totally sick, bro.

High fives all around. Into this bonkers and pointlessly convoluted world drops an older gent called Ray (Dean Imperial). He has a certain look to him, a certain manner, of like a guy who probably knows how to get rid of a body, but that’s not who he is. Ray is more of a working class guy who’s okay with cutting corners, but he’s not an out-and-out criminal. He’s just a desperate chancer, trying to get by, trying to look after his brother Jamie (Babe Howard), who suffers from a condition called Omnia.

That’s the only other difference between our current world and that of the film. A condition called omnia takes over a large part of the population rendering them weak and helpless, kinda like chronic fatigue syndrome but more pervasive and more debilitating. Jamie can’t seem to do much, and Ray wants to find a place where they may be able to help him. Clinics have sprung up claiming to have treatments with which to help these chumps, but the second they mentioned “acoustic magnesium” as a technique to help them, we know it’s a fucking scam.

We never get closure on the whole “omnia” concept. I’m guessing it’s not a coincidence that the title of the flick is a Latin word that can mean a lot of things, including “mistake”, but “omnia” can mean all or all things, so maybe it’s a name for a disease which encompasses everything.

Bit thirsty? Yep. Bit tired? Eyes a bit sore. Sure. Soreness anywhere? Does my left pinkie toe count? Sure. Then yes. I’ve got a little bit of everything all of the time, so I must have omnia.

Jamie might be just depressed, but Ray wants to do whatever he can for him, even if the clinic might be a scam. He takes Jamie in, then after getting the hook-up on a slightly used medallion, he hits the trail with a bunch of mostly way younger people who look at him like he’s a very old unicorn.

Ray maybe doesn’t inspire a lot of confidence, despite being a fairly confident kinda guy. He’s middle-aged and paunchy, and doesn’t look like he’s walked much voluntarily for much of his life. But this is the only way he can think of to make some money to pay for Jamie’s treatments, so he’s going to do what he can. He also, despite I’m guessing being younger than me, has the kind of relationship to technology that 80-year-olds do.

He knows none of the ropes, but people are generally helpful. There’s lots of videos saying how great working for CBLR is going to be, using all the old and new corporate speak that mostly amounts to “We’re going to do what we want, and if you get crushed, no-one’s going to care.”

He has to drag a trolley behind him that unspools cable, across untold miles of forest. If he does well he’ll be rewarded with better, more lucrative routes which are also presumably more dangerous, or at least way longer. He has to camp in the forest overnight, several times, and he’s clearly never camped in his life. People, of which there are a lot on the trail, don’t use their real names, they use so-called “trail” names, which are nicknames attached to their medallion ids. When Ray checks in with his device, the name that comes up is “Lapsis Beef-tech”, which sounds pretty dumb, but other people, when they see it, seem horrified.

Not only is it a name that inspires fear and loathing, but there are many points attached to that trail name; points that Ray is very reluctant to use, but eventually succumbs to, because it means he can get decent gear and not suffer as much while trying to work.

It takes a long time to figure out what the whole deal is with this Lapsis Beef-tech character, whether he’s villain or hero, or whether the whole cruel architecture of what’s been created is his fault.

Ray seems to bump into Anna (Madeline Wise) who knows all about the system, and the systems in place, and how to block the creepy crawly drones without triggering any of their defensive systems. She has an agenda beyond getting to the end of her route, or her allotted time on the trail. She seems to want to do something to help everyone that seems to have been harmed by Lapsis and something that he did for the company which has made the drones so powerful.

But she doesn’t trust Ray, no-one does. He gets to the end of his trek, expecting riches beyond anything else he’s ever earned in a weekend, and of course the company finds a way to fuck him. And so everyone comes calling for a piece of him – the guy who got him the medallion, the other jerks from the trail, he can’t afford to keep his brother at that goofy place anymore, and basically he was never going to get ahead because you’re never supposed to.

As a metaphor for the gig economy it’s probably too obvious and too close to the bone while simultaneously being so onerous and arbitrary. And Ray, for all his good intentions, bristles when Anna points out to him that his pulling himself up from his bootstraps and doing an honest day’s work is bullshit when everything he’s wearing and carrying, and even the route he’s scored is because of something someone else entirely did before him.

It’s a pretty tacky way to do the whole individual versus common good of the workers unite! stuff, but I guess it’s a fairly ambitious way to get it across with such a low budget, though all the budget in the world wouldn’t have changed this flick from its modest intentions. Yes, there’s an attempt at changing things with something practically magical towards the end, but it definitely doesn’t come out of nowhere. It manages both to come up with something that implies things could be different without giving the kind of ending where everything explodes and the fireworks in the sky imply the good guys won and everything will be okay again forever.

We all know they’ll try to fuck their workers, sorry, their independent contractors some other way, but at least this time maybe their own employees won’t work so hard to doom each other.

It’s an interesting enough film. I enjoyed it but I can imagine a lot of other people not inclined towards its lowkeyness and timely message against corporate dehumanisation perhaps being a bit bored by it. It doesn’t go out of its way to being endearing, but it did hold my interest for most of its running time.

--
“Remember, the best cablers are the ones who aren’t afraid to challenge the status quo.” – all hail the Quantum Cube! - Lapsis