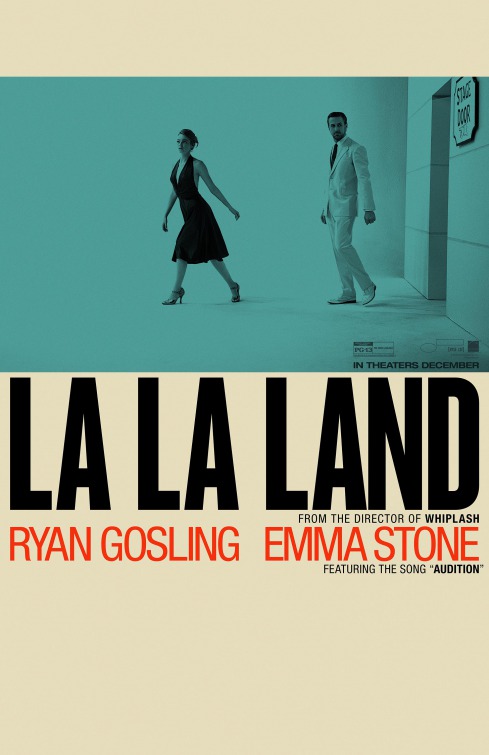 Also, it’s not like they’re completely oblivious to how it might come across, since it is after all a film named after the state people often use as an insult to describe how delusional someone else must be ‘that fucker’s off in la la land, with the fairies and the unicorns and the leprechauns and such’.

It’s almost brave, almost cheeky. Although it’s billed as a musical, and has some pretty sequences and numbers, it’s not like they’re singing all the time. It starts off really well, with a bunch of people, Americans no less, Los Angelinos no lesser, singing and dancing away their frustrations at being stuck in a traffic jam instead of endlessly beeping their horns and threatening to shoot each other, which seems far more likely.

The routine seems to be about praising the life-giving energy and all-round awesomeness of the sun, and who could really complain about that? What kind of soul-sucking drain on humanity could find fault with that? What, do you hate photosynthesis and nice days at the beach, you monster?

Of course, the sun also does some bad stuff (like, sunburn really sucks and deserts are kind of horrible), but the attractive people singing and dancing like people with better nutrition and skin care products from the early 1960s don’t care nothing about that nonsense. With all these people carrying on, the only ones we really care about are two faces in the crowd, one of whom beeps in annoyance at the other, and the other gives them the finger.

Well, at least in this reality, she’s not even getting close in auditions, with the cruel casting directors dismissing her within seconds of her arrival, or looking her up and down and passing on her already. She’s even professional enough to learn her lines and emote and stuff, but Hollywood ain’t interested.

Seb struggles for relevance, too. His job, when we first see him at work, involves playing standards at an obviously terrible restaurant managed by a monstrous maître d played by J.K. Simmons. Because a shitload more people saw this and not Whiplash when it first came out, they might not know that the same director made both films. I like to think that the monstrous sadist Simmons played in Whiplash and won an Oscar for is the same character here: fired and sued for his abuses towards music school students, he has to work in the service industry as some kind of court mandated penance.

This monster forces Seb to never play anything good, only to play the most cliché of songs, Mary Had a Little Lamb and such. If you were paying top dollar for pomme frits or filet mignon or angel wings drizzled with the tears of gypsy children or whatever, and the shmuck tinkling the ivories was playing Kenny G’s Greatest Hits, wouldn’t you complain to someone? Wouldn’t you be screaming blue bloody murder?

But no. Seb plays his own heartfelt song, one which catches the attention of Mia and no one else in the whole establishment (with the exception of his employer, who promptly fires him, maybe because the song wasn’t played at his tempo) and it becomes their theme song, to be used strategically throughout the film at crucial moments.

Eventually, of course, they’re going to get together, we know that, because they’re the most attractive people in the flick, but also because they’re attracted by each other’s potential. It’s the fact that they really really want to succeed at a thing that makes them most appealing to the other, because it makes their own dream seem more vital, or likely, or reachable.

If/when they fall in love, it’s in the moment when Mia realises that she’d rather be at an old theatre showing Nicholas Ray’s Rebel Without a Cause with Seb than sitting at a posh restaurant with her boyfriend who looks disturbingly like one of Trump’s sons / Patrick Bateman talking about fine wines and trips to Aspen.

Sure, it’s a sugary treat, but I like sugary treats on the screen, sometimes. It was and is enjoyable to watch people singing and dancing in colourful clothing and style in a perfectly shot manner deliberately aspiring to replicate the song-and-dance numbers from the Golden Age of Hollywood. I’m a sucker for it, and it was delightful to watch.

It’s when the music and the set pieces aren’t happening which is where the flick is problematic for me. It’s not just that those parts can be a bit flat, it’s just that the majority of the flick ain’t song-and-dance routines, where the mundanity of the ‘real’ world is just so crushing.

It’s not for me to judge the relative worth or likelihood of their respective dreams. Mia’s dream is to be a famous actress. There are, at last count, fifty million people in California alone with the same dream. 99% of them work service industry jobs, like she does (poorly, in a coffee shop on the Warner Brothers studio lot), 40% of them will end up in the porn industry (but only for a brief time), 58% will stage some sort of reality tv / sex tape fiasco in order to try to go viral, but less than 1% of them will ever get to the Emma Stone level of success.

There’s nothing that awkward about a Hollywood flick pushing the wanton desirability of people wanting to become Hollywood stars. If what it does is worthwhile (artistically and financially) then it’s only normal that Hollywood would try to project outwards to us lumpen mouth-breathing drunken clods in the audience that of course we would want more than anything to be like the people we see on the big screen.

That’s neither here nor there. Seb’s dream on the other hand, to single-handedly ‘save’ jazz as a genre or art form by staving off its gradual decline into irrelevance; to own his own club in LA honouring the greats of the genre (despite not seeming to have the money to get his shoes shined, let along open a club), and to get to play with legends and play whatever he wants whenever he wants: this is the dream that seems even more unlikely than Mia’s.

This is my (sarcastically) favourite part of the film: Seb overhears Mia talking on the phone with her mother. Mia essentially tells her mother that her new guy is hot but a bit of a loser when it comes to money. This prompts Seb to actually get a job, well, more accurately, an absurdly lucrative opportunity falls into his lap, and he takes it because he doesn’t want to be seen as a loser by Mia or Mia’s mother, who he’s never met. Important plot motivator.

The job, playing keyboards for a John Legend-like musical performer played by John Legend, involves playing music to crowds, getting like $2,000 a week and a cut of merch and music sales. The math on that can be done pretty simply even by mathematical simpletons. When Mia watches him play, she is disappointed, because she feels that this isn’t the music Seb said he wanted to play, and it’s not him following his dream. I’m not sure how exactly she expected him to get enough money together to start a fucking jazz club from scratch, but apparently it wasn’t meant to be from working hard and making some sacrifices.

They have a fight, a falling out, because he thought he was doing what she wanted, and she feels like he’s abandoned his dream. Cue lots of pouting. But she wants to continue to pursue her dream, at least for now. That involves writing and performing a one-person play. Which she performs. To, like, five people. And one of them isn’t Seb.

So she’s going to abandon her dreams, and move back home. Gods I wished the flick would just end there. Brutal realism. Cold light of day. The crushing of dreams and hearts that got too big for their britches.

But no. A frothy entertainment of such frothiness isn’t going to end on such a downer. It aspires to end with a different kind of downer, where everyone still gets exactly what they wanted but only because they wanted it in a true and pure way and chose not to compromise in the end. If your heart is pure, then everything will go your way. If they didn’t go your way, you just didn’t want it enough.

Bleurgh. Who cares, though. In this kind of well-made frothy confection, it doesn’t matter. There’s enough sadness and longing in this to counterbalance what could have come across as superficial clichés and empty platitudes.

It’ll do. I very much enjoyed it at the time, especially whenever the main theme played, and the heart-breaking alternative ‘history’ at the very end is incredibly bitter-sweet, and quite lovely.

La La Land. Nice place to visit (with your eyes). Would hate to have to get by in that dirty old town on tips, broken dreams and the essence of crushed souls.