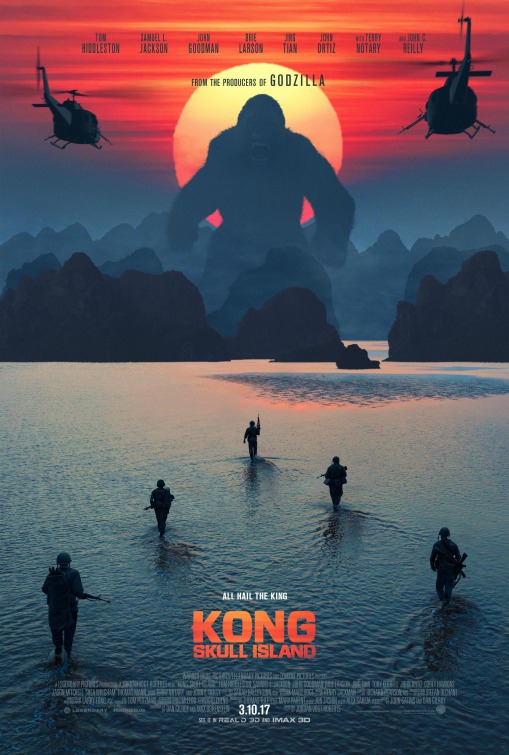 Maybe if they just shoot at him a few more hundred times,
that'll work

Good Lord is this a dumb movie. But, in the time-old math of cinema, dumb does not necessarily ≠ fun. Dumb can be way fun, as long as the fun isn’t overwhelmed by the dumb.

You need a decent balance, and I’m really not sure that Kong: Skull Island bothers to get that balance right. Of course, had I watched this drunk, plenty of the dumbest aspects of the story wouldn’t have leapt out at my eyes and brain like one of the Lost World creatures from this flick.

Yes, it’s a King Kong flick about King Kong. But it’s not really. It’s an excuse to make a Viet Nam war movie without having to actually get into the messiness of the Viet Nam war and what both sides of that stupid conflict inflicted onto millions of people.

What you do is get a guy, somehow a senior Army colonel (Samuel L. Jackson) freshly stung from losing the war (he’ll tell you, like he tells a photographer, that they didn’t lose the war; they just abandoned it instead, like they lost interest in it and it wasn’t worth their time anymore) against the North Vietnamese, the Viet Cong, and pit him against an unstoppable force of nature called Kong. Get it? Kong and Cong? It’s the same thing, in case you didn’t notice. Why didn't you notice, huh?

And he has just as much luck here too. But it’s a long road we have to trudge down before Ahab can finally get his whale, a road filled with oh so many Creedence Clearwater Revival songs and every other Nam era cliché bullshit you can think of. Yes, sometimes it does seem like movies can only be constructed these days from other movies, as if they’re trying to do their bit for the environment by recycling.

I am one of those people, in fact I have tolerated a number of pointless movies only because I knew he was going to be in them, but to say he’s unnecessary in a movie about a giant ape seems to imply the other people in the flick are more necessary than he is.

The truth is, that’s absolutely the case. Somehow, and I’m not entirely sure how or why, it’s Loki himself who seems the least necessary out of all the other people in this flick whose job is mostly to die. And there are a lot of people, but you need lots of people with monster movies, because you need lots of food for the monsters, naturally.

See, I get why the photographer is there (Brie Larson), because you need someone for the military types to yell at. I get why there is a nearly mute Chinese actress there, on the island, because I guess they think that’s how they crack the Chinese market (she does nothing in the flick other than look winsome and like she should be ordering a malt milkshake at a 50s diner).

John C. Reilly as a crazed WWII pilot living on the stupid island of the title for like a million years? Well, you need him, because he’s John C. Reilly, and he’s hilarious. I wonder whether he laughs in his sleep, even, because even his dreams must be hilarious.

The other forty or so soldiers and scientists? Sharp teeth and claws need people to be sharpened against. Nature, especially here, may be red in tooth and claw, but it needs victims, a steady flow of victims, just like, to stay in peak fighting condition.

Samuel L? Well, he doesn’t turn roles down, and you always need someone to yell at things / people / monsters. He spends so much of this movie gurning at stuff. If you don’t know what gurning is, it’s where you wrench your face into an expression so hateful that your mother comes up out of nowhere and warns you that if the wind changes, your face will be stuck like that forever.

You assume that would be a bad thing. Samuel L. gurns so hard at the giant monkey, sorry, ape, that you know isn’t there, because it’s like 200 feet tall and uses up most of the world’s CGI resources in its construction, that I started worrying that maybe he could actually see Kong for real.

And that he really, really hates him. Why does he hate him? Well, like with the end of most romances, there could be stacks of reasons. The key reason, you’d think, is that Kong kills a bunch of his soldiers. These soldiers, mind you, managed to not die in Vietnam, and yet came to suffer an even worse fate on Skull Island: a place where men are men and are there to be eaten. And there are so many things on the island that just flat out want to eat people.

Skull Island, in all the versions of this story, possesses an environment and an ecology that really seems to hate humans, kinda just like Australia’s does. This version is no different, and if anything ups the humans-as-prey quotient, which is delightful if you like watching die or be smushed in PG-13 ways, which I don’t, really. It’s not like I’m against it, per se, but then what kind of a freak would I be if I said I was for it?

And yet – Bam – out of nowhere, there he is to either kill people or save them, as the whim might take him. I guess he’s kinda like the Old Testament God of the Abrahamic tradition, alternately killing or saving people depending on how much he’s had to drink.

Just like in the recent Godzilla movie, the one where humans were mere ants at the feet of this magnificent titan, Kong seems almost to be (eventually) defending humanity against worse creatures than him, and it’s not a coincidence, because the same secret scientific society bullshit (I’m referring to the Monarch stuff, which was also in the other flick) which seems like the kind of Illuminati / Masons bullshit inserted into stories by schizophrenics or for schizophrenics, is also here. They (in the mighty form of the mightily somehow slimmed down John Goodman) believe that there are these giant creatures in the Earth, and that some of them are bad, and others might end up protecting us from them by default or accident. If so, let me just say, it’s not like these Monarch types really have much of a justification for their existence.

In this world, there are ‘bad’ giant creatures, and there are these neutral giant ones, and if there’s a chance the neutral ones might stick up for us, well then, yowser, just get the fuck out of their way and let them fight. Thing is, though, what exactly do these Monarch types actually do if that’s their strategy? You’re not exactly adding a lot of value to the scenario, are you?

There is no doubt that the next film in this inevitable series will involve Kong and Godzilla probably punching on and destroying half of New Orleans or Omaha, Nebraska in the next flick, before teaming up to punch giant aliens or Ghidra the Three Headed Dragon or Rodan the Pterodactyl, or the giant moth or the giant turtle or any of the other ‘classic’ kaiju monsters made famous by the Japanese movies from days of yore. What these future installments probably won’t have is Tom Hiddleston standing there emoting dully at a greenscreen, wondering why it is that he agreed to these flicks in the first place when he could be playing Henry IV again in a park somewhere or banging models or something oh yeah it’s for the money, I just remembered.

The soldiers were so generic, so incredibly generic that it was almost comical. Samuel L barely bothers to have to act anymore, he just turns up and does facial expressions. Giant monkeys will always be fun. Hiddleston was bored and it showed in his performance. I was a bit too, but there’s barely anything worth remembering in the whole experience. It did look pretty impressive though.

6 times and it’s way better (and over an hour shorter) than Peter Jackson’s bloated King Kong, that’s fer damn sure out of 10

--
“I've never said that name out loud before, it sounds stupid now that I say it. Just... you call them whatever you want.” – you could safely say this about most of the dialogue – Kong: Skull Island