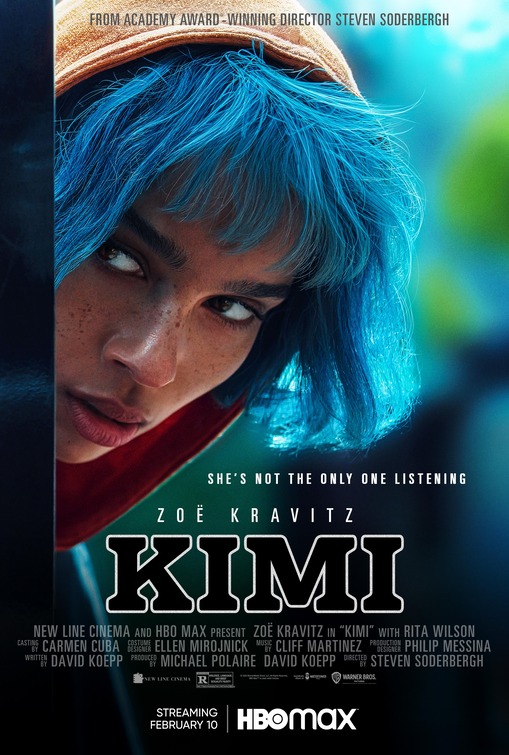 Who looks at this wily, confident woman and thinks
"our corporation will win against her?" Idiots.

A lot of flicks have come out, have been impacted by lockdowns and such, have even tried to address this dreadful time, but it’s all too soon, all too lame. The best they’ve managed is some two-handers where a couple of actors yell at each other in a confined space with minimal crew for an hour and a half, never mentioning The War.

Instead of a two-hander, this flick staring Zoë Kravitz, who seems to be in everything at the moment, and is mostly a solo gig. As a shut-in IT worker ‘happily’ working from home during the pandemic, much of the flick transpires in the main character’s apartment.

On her lonesome, except when she occasionally has sex with a guy from across the street. The main character’s name is not Kimi: her name is Angela. “Kimi” is the alternative Alexa – instead of working for Amazon, Angela works for Amygdala, which might as well be called Amazon. Anyone with half a brain automatically thinks they’re talking about Amazon anyway, why bother with the charade, ya timid fucks?

Instead of Bezos drinking people’s blood and fucking their wives, the CEO of Amygdala is the one assuring the public in interview that the in-home voice activated device definitely isn’t harvesting people’s data when people haven’t activated it directly.

Of course, Angela’s job seems to be sifting through conversations recorded by the system for data useful to the company when they have no idea they’re being recorded.

It’s enough to make you a bit paranoid. In the past movies and spy stories especially used to revolve around the idea that if you were somewhere unsafe, or if bad people snuck into your house and planted a bug, then they could record something that could damn you, legally or otherwise. We had these notions of privacy, of safety that were somehow unassailable, which could be breached by bad people with recording devices and ill will.

But back then most of us never imagined we would all voluntarily give up our privacy just in order to have the world in the palm of our hands. It seemed a small price to pay. All the paranoid schizophrenics and various other people who thought the CIA was listening to their conversations through the fillings in their teeth turned out to somehow be right, but in a really boring, undramatic way.

It turned out they were out to get us, but only our data, in order to push more targeted ads at us, and to compile more accurate consumer habit databases, and also to package it all together in order to have something else to sell to other companies, in order to cover the cost of all the “free” social media apps we download and put on our phones, that helpfully share our location data with whoever asks for it.

Can you turn your location off? Of course. But then most of your apps don’t work properly, and keep nagging you to turn “my location” on in order to best optimise your online experience.

Angela works for that industry. Angela is good at her work, but she is part of this monstrous machinery. Of course she falls afoul of it, and the people behind Kimi end up trying to use all of the invasive technology of the world in order to find her and kill her, but we are meant to think “well, if techs like you thought about the ethical implications of their jobs, maybe this never wouldn’t have happened?”

You read that right: kill her. Billion dollar entities about to have an IPO don’t fuck around, they’ve got to protect their proprietary algorithms, don’t they? Especially when one of their employees overhears a conversation between the CEO and someone he’s viciously sexually assaulted, and then had murdered.

But that’s the thing about the program Kimi: she’s always around, and in the wrong hands she’s evil, but in the hands of a “good” person fighting to survive, well, she’s still potentially a force for evil, but at least it can be in Angela’s favour when it counts.

I would not go so far as to imply this is a cautionary tale about our over-reliance on technology, because this is just trying to be an entertaining fairly fleet and compact movie to entertain the shut-in masses. Because Soderbergh has made a million movies, he also likes opportunities to remake other movies on the sly, so there’s elements of Rear Window here too, for those old enough to remember.

I’m not going to go on about the Rear Window connections too much, because it’s like one of the weirdest, most well known and most overrated movies of all time, and yet it’s also my absolute favourite of all of Hitchcock’s films. Angela is only the Jimmy Stewart character here insofar as she is trapped in her apartment because of her agoraphobia, not because of a broken leg, but we get to feel her anxiety about what it would mean to leave her safe haven in order to solve a mystery.

Or, even worse, if it is no longer a safe haven at all.

We see her trying to leave the apartment at the beginning, to meet up with her, um, fuckbuddy? at a breakfast burrito van, but she can’t do it. She nearly does it, but she can’t bring herself to. She’s too traumatised by something awful that happened to her.

The film, of course, finds a way to force her to force herself to leave the apartment. And the world she unwillingly tries to navigate is one hostile to people, because it’s clearly happening during the pandemic, which is already a tense and paranoia-inducing environment even when they’re not out to get you.

She forces herself to travel to Amygdala’s offices in order to get some kind of justice for the women who she thinks was murdered – it’s not for herself. So when she meets with someone who she thinks she can trust, we are staggered to find out that she can’t trust them, And That They’re All Out to Get Her.

Bloody corporations. It’s almost like they value themselves over individuals or the law.

This is where the flick shifts from being a tense but technically-driven and low key mystery, to a full on (low budget) action thriller, as goons, hired goons even, start trying to make things bad happen to her in the real, physical world on the streets of Seattle.

Throughout, Kravitz is great and believable. The tech that is talked about is not anything beyond stuff we already have in this actual world, so it never sounds like science fiction, and nor does it sound like crappy screenwriting from people who imagine but don’t know what tech or these jobs sound like. At no stage is Kravitz not believable as this wary, cautious character.

When she transforms from potential victim to righteous avenger at the end, thanks to Kimi’s functionality and Angela’s ruthlessness, it’s abrupt, and shocking, and it almost feels like it comes out of nowhere, but that’s probably the best ending this flick could have had. Why drag that bullshit out for another half hour or so? This flick comes in at a minute under 90, and that’s great in this era when, thanks to streaming services sense of entitlement to our attention, directors don’t care if a final cut of their movie is over four hours long, because they think we’ve all consented to Stockholm Syndrome when we signed up.

Kimi does its thing, gives us a compelling blue-haired character, puts her through the ringer, has her come out in triumph, and then gets the fuck out of Dodge. It’s like the perfect house guest. I loved this flick probably way more than it deserves, but for me it’s the best pandemic-related flick that’s come out that explicitly references the pandemic without being about the pandemic, and being more about the absurd technological dystopia that we’re already in.

You know, by our own consent.

--
“Kimi, play Sabotage” – what a way to get all the Gen Xers excited, Soderbergh - Kimi