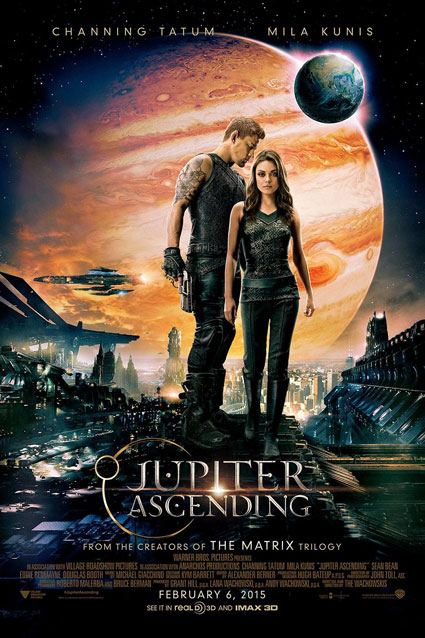 The Wachowskis: Finding new ways to make you regret
ever liking any movies they've ever made

I can’t really understand how the Wachowskis can keep getting these budgets for their movies. It’s insane. I can’t get an extension on my overdraft, but the Wachowskis, whose last few movies have lost an extravagant sum, close to like 500 million dollars, and yet someone keeps bankrolling them.

They’re like the Donald Trumps of the moviemaking industry. Maybe they have photos of someone, maybe the amount of money they made on the Matrix movies gets them a free pass for life.

I have no idea, but if they are given like another $200 million for their next movie, there is no justice or fiscal sanity in this world.

If it does, amazingly, happen, it won’t be for a sequel or another instalment in the Jupiter series. I have no doubt, really, considering it cost so much to make and could not have made its money back, no matter what is claimed on various sites through the so-called ‘foreign’ markets.

Saddest of all is that somehow this is considered at least a partially ‘Australian’ movie, due to who put money into what, and a lot of the post-production work. Damn, someone’s career should be toast over that one, or at least someone deserves to be mocked over Friday drinks at the very least.

To say that this film is terrible ignores a few basic realities. It looks nice in certain bits. A lot of money was spent on effects. It’s not based on Marvel or DC comics, or any comics, and that’s a plus. It’s an original creation of the Wachowskis, in that it’s not directly an adaptation of anything else, although, since it’s the Wachowskis, it means it’s cribbed from whatever they’ve seen and liked before.

Before I ridicule/lambaste anything or anyone else, I will point out this one basic fact: Eddie Redmayne is in this. Eddie Redmayne may or may not be a household name in your household. Eddie Redmayne recently, as in a couple of months ago, won an Academy Award, that’s right, an Oscar, for playing Professor Stephen Hawking in a little movie called The Theory of Everything.

Eddie Redmayne’s performance in this here movie is so, so awful that I honestly and genuinely believe the Oscar he won for that other performance should retroactively be taken away from him.

Not only that, but he must be barred from future movie roles and awards contention. He should have to pay film studios to get roles, and spend a lifetime doing good works to claw his way out of the deep pit of shame he deserves to be in.

But do you blame him for performing in these horrible ways, or the directors for agreeing with it/encouraging it?

Well, when you see a kid acting awfully in public, don’t you sometimes wish the parents would step in and discipline their kid? I don’t mean violence, I mean sternly but kindly curbing whatever awful tendencies their little King Joffrey is inflicting upon the general public.

Like in those circumstances, it’s not entirely fair to blame either party without getting some kind of understanding of what went so very wrong and why. Having said that, I blame Redmayne entirely. The performance, as Balem Abrasax or whatever the hell that villainous name was, is terrible in new and horrifying ways, ways that sometimes aren’t even consistent within the same sentence of dialogue, let alone the same scene.

There needs to be a supercut placed on the tubes of the internets that delete every other unimportant aspects and moments of the movie (ie. everything else) and just let Eddie Redmayne be Eddie Redmayne, with the awful whispering line deliveries, the infantile screaming, the arch and pained toffee tone, the everything that makes him seem like someone auditioning for a role in a high school Rocky Horror musical unsuccessfully.

I could go on. In fact I will. Redmayne’s performance is so bad it makes many of the other aspects of the movie, which are pretty bad or at least incompetent, seem slightly less bad. It still sticks out like a pustulant, gangrenous sore thumb.

Or infected dogs’ balls, or whatever other analogy you could prefer.

By this stage it’s almost superfluous to address other aspects of the movie, but what remains does make you wonder how this shit got made. I’m all for ‘original’ and risky productions, because when they pay off, they’re amazing, and they impact the movies that come after them, in ways both good and ill.

Jupiter Ascending will convince at least a few studios not to bother with ‘big’ sci-fi unless the words ‘based on’ or ‘Part IV’ are appended to the script.

In another big reach, the Wachowskis come up with another way of saying to audiences that the world they assume is their own is but a pale shadow of what’s really going on. In the Matrix movies it was revealed that we’re just pale bodies floating in goo as our minds are trapped within a simulation of reality, slaves to the system.

Jupiter Ascending posits something even worse: people of Earth, you are being fattened for slaughter. A clan of virtually immortal aristocrats seed likely worlds with humans, and once the population gets large enough, they’re all slaughtered, reduced to their chemical constituents and refined into some kind of anti-aging cream.

Now you know the terrible truth about what Lancome and L’Oreal have been doing for centuries, except they just do it on orphans.

This wouldn’t be too much of a problem, except Earth is getting to be ripe enough for harvest.

All of this is completely unknown to everyone on Earth, especially a young Russian-American girl called Jupiter Jones (Mila Kunis), who, by some vast coincidence, happens to possess the exact same genetic sequence as the matriarch of the awful aristocrats. By this amazing coincidence (which I guess isn’t that amazing a coincidence, since there are presumably trillions of human cattle peppering the cosmos, so the reappearance of the specific sequence is perhaps not impossible, though, no, wait, it absolutely is), she is immediately pursued by a whole bunch of different people, despite having done such a wonderful job as a cleaner thus far.

It’s not for these qualities that she is the ‘chosen’ one in this circumstance; it’s purely for her DNA that they love her. The evil Abrasax guy has two equally odious siblings whose sole virtue is that they aren’t as unspeakably acted as Balem (though they’re both still terribly directed). They all, I dunno, want something from Jupiter, who doesn’t really do much other than look surprised when surprising stuff happens to her, and yell / scream when she falls off things.

She has virtually no agency throughout the entire story. Contrast that (unwillingly) with The Matrix, which had some random guy randomly be The One because… well, it happens, but then he actually does stuff and looks cool doing it, and makes decisions. Jupiter gets to, I dunno, decide whether or not to marry an aristocrat, who I guess is her son? Also, she then has to decide whether to give the Earth up or not at the end because… family?

She’s given exactly two choices, neither of them being actual choices, and nothing she really does actually impacts on the story in its stupidity-filled entirety. Other characters are always the ones making things happen, saving her bacon, or blowing things up.

She doesn’t even get to blow anything up, fer crying out loud.

The one with agency in the flick is Caine (Tatum), who is a human/dog hybrid with these hover rollerblades and a shield. It’s as dumb as it sounds. And he used to have wings, so not only is he like an angel or something, he kind of looks like a kangaroo as well.

There is so, so much to pick apart and mock but I’m going to go easy – it’s really not worth the effort. But I will point out that a lot of the flick plays out like we’re meant to know what’s going on, and that we’re meant to care.

Wrong on both counts. This is a story that must have meant a lot to the Wachowskis, and like truly creative people they’ve created it with little regard for what some audience might think. But so many bits of this bizarre yet horribly conventional story should really have been excised, and maybe this makes the case for meddling studio execs having more of a say.

What about the former friend/colleague of Caine’s (Sean Bean) who they go to for help who starts wailing on Caine, for no discernible reason, who lives in a house filled with bees? Bees everywhere? Is this how the honey industry works: you fill up the whole house with random CGI bees?

Why are the bees there? Well, because they’re there to acknowledge that Jupiter is a queen, because that’s what bees do. Apparently?

If any of that sounds sensible to you, by all means, watch this movie. If that sounds like something you’d hear a crazy person screaming on a street corner, or a child would write as part of a creative writing project in prep, then maybe skip this terrible, inexplicably terrible movie. Or see it, and be amazed and astounded at how something like this could ever be put together by willing participants with bags of money and no obstacles to their horrible ambitions.

--
“I will harvest that planet tomorrow, before I let her take it from me.” – and I will help you if it means I’ll never have to watch a movie this shitty ever again – Jupiter Ascending