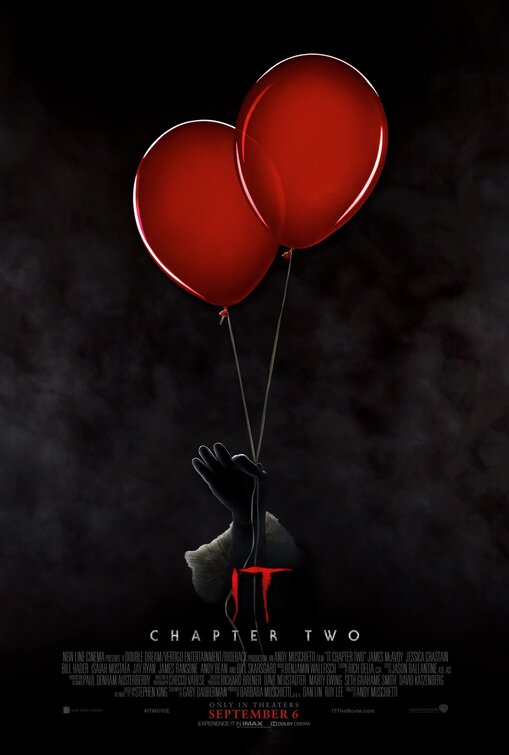 Two balloons means twice as great and attractive as one

The thing is, it’s not good, and in fact is fucking bonkers in a bad way, in a lot of ways. But it’s the ending we had to have. Because honestly…

So many jokes are made at Stephen King’s expense regarding the endings of his books or stories in this flick. It happens so frequently, and so mundanely, that when the actual Stephen King turns up in a cameo as a pawnshop owner joking about the terrible endings of his books (through another character, who effectively becomes the King stand-in), you start to wonder what they’re buttering us up for.

Because take it from me, and maybe from Maria Schneider from Last Tango in Paris; nothing good comes from being buttered up.

How you feel about this last epic Chapter 2 depends a lot on how you feel about the epic Chapter 1 and the epic book that both come from. Also, no-one is scared of Pennywise anymore. That ship sailed a long time ago. Over-exposure has kind of upped our immunity. Where one might have dreaded seeing the crazed clown peering out from a drain or the dark recesses of our minds, it’s been overdone, and he barely even eats anyone anymore. I guess being gone for 27 years will do that to someone’s rep.

I think it’s been 27 years since the events of the first film in a little shitty town called Derry. Most of the members of the Losers club have moved away and grown up to be fairly disappointed adults, pretty much like most adults. Beverly (now played by Jessica Chastain) was fleeing sexual abuse as a kid, and as an adult is in an abusive relationship. Bill (James McAvoy) has become a best selling author whose books are made into films, and though successful, no-one likes the shitty ends of his books. Richie (Bill Hader) has channelled his nasty mouth and acerbic hot takes on everything and everyone into a career as a stand-up, but he’s still a mess. Ben (Jay Ryan), graduating from being the token fat guy of the group, is a buff architect that wouldn’t be out of place in a Chippendales line up. And then there’s Eddie and Stanley and Mike.

The thing with them all being played by adults now, is that you miss the kids, the kid actors and the dynamics they had in the first flick. That was the best aspect of the whole experience. Not the perplexing evil clown, not watching people nearly die. It was a bunch of outsider kids who called themselves the Losers Club who chose to look out for each other no matter what.

Here they’re some pretty decent actors pretending like they remember each other, but we know they really don’t. Because they’re acting so much and so hard.

Which is part of the plot. Despite the horrific stuff the kids experienced in the first flick / part of the book, none of them, with one exception, remember what happened. Their lives may be different levels of awesome or awful, but it’s not because of the trauma that they remember from battling a child eating interdimensional whatever the fuck Pennywise is. They’ve forgotten it completely. The pain in their lives, or the dissatisfaction that lingers within them is down to the general disappointments and sadness that comes with every average shmoes life.

And that’s okay. In fact, that’s grand. That’s about the only grounded thing in this entire bonkers story.

The other element is: how great it is escaping from the shitty town / suburb you grew up in, and how awful it is to return. Try as we might to flee as far as we can, circumstances sometimes force us to come back and see how humble the circumstances were from whence we sprung.

Ugh. And within that construct is the mixture of pity and disgust for those we might have grown up with / near who never transcended their town’s bullshit, and for whom time barely passed over the decades.

The easiest symbol of that here is the bully who bullied them and tried to kill some of them, especially Ben, in the first movie. Henry Bowers (Teach Grant), sports a wicked mullet and the same kind of Jim Bean / Jack Daniels / T Bird / NASCAR singlets that most of the hick small town stereotypes are assumed to wear. I guess they didn’t want to make it too obvious by having him wear a Make America Great Again cap, but it’s pretty obvious where they’re aiming. He murders a bunch of people without repercussions but he was, after all, in an asylum, so we should probably make some allowances. It’s only fair.

He is trapped, hence the mullet, in the past. They are all, we are meant to assume, trapped in the past in different ways, unable to move forward in a lot of ways, because of either the clown, the shitty town, or life in general.

The most depressing element for me was seeing Bev trapped in a relationship with an abusive, controlling prick. I mean, I hate seeing any instance of it with any character in anything ever – I can’t overstate how much I feel sick and heartsick when I see domestic violence, but I guess that’s the point. We should find it horrifying, and we should be trying to do what we can to protect everyone from it. But this isn’t the flick that’s going to serve as a rallying cry to protect women, children and men from intimate partner violence, because the flick totally glosses over it. Once Bev escapes after a violent fight, it’s never mentioned again. The complex psychological underpinnings of why someone fleeing an abusive parent could again end up in a controlling, abusive relationship are just put up there as window dressing, as a character element, with nothing of substance attached to it.

That’s disappointing. Even if Jessica Chastain is a great actor, and she is, there could have been much more to her character here, and she’s nowhere near as convincing as Sophia Lillis who played the younger character with the same kind of intensity she brings to a great series that almost no-one likes on Netflix called I Am Not Okay With This.

The element that’s meant to be the most depressing is the fact that Mike (now played by Isaiah Mustafa) elected to stay behind in Derry and devote his life to researching Pennywise and to await his return. As such he lives a sad life in the Derry local library obsessively researching or investigating whatever he can for the next battle he knows is coming. With respect to the actor, he’s a bit of a blank slate as a character defined by only one characteristic, being his role as the deliverer of exposition. I mean, I guess someone always has to play that kind of role in these kinds of things, but it’s a thankless task, truth be told, and seems clumsy. It could always have been clumsier, no doubt. It would have been so token and cheesy if there’d been a trip to a Native American reservation in order to have some wise old medicine man tell exactly who and what Pennywise is and how to stop him. Instead they just have Mike make up a bunch of stuff and pretend the local tribe told him about it.

That’s way more efficient. You might wonder how they can stretch something out for nearly three hours when there’s not really enough story there to justify the length of time. They find a lot of ways. A lot of subplots and dead ends and pointless bonkers scares as Pennywise pops up out of nowhere and does freaky shit with no semblance of genuine threat. I mean people die, but a lot of what is going on doesn’t feel as threatening as it did in the first flick. That could just come down to it being scarier when a group of kids are threatened as opposed to a bunch of A-list actors. But the main reason could be the goofy way Pennywise increasingly “expresses” himself, or manifests, or many of the dumb things he does just aren’t scary, or even mildly worrying.

So what we ultimately are meant to care about is whether the characters can “reconnect” in meaningful ways, and help each other realise things, or come to terms with things, and that’s all well and good. They each go on individual journeys of discovery in the pursuit of personal items which they imbued with some kind of significance. Richie has to figure out his way out of the closet. Bill has to get over his guilt about his little brother George’s death in the first chapter. Bev has to realise about Ben now that he’s really buff and has abs on his abs. Mike has to lie about shit in order to either make sure they all die or they all survive, I couldn’t keep track of what.

Mostly there are a lot of bizarre decisions on the part of the director where any scene which could have been a bit scary, or had a certain amount of tension in it, is deflated lamely with something that might be comedy, but isn’t funny, so I’m not sure what the right descriptor is meant to be. Comedy that isn’t funny isn’t, by default, drama or horror. It’s just lame. And that kind of stuff is rife throughout this flick with examples too numerous and painful to mention. This guy ain’t no Edgar Wright, that’s for sure. The terrible CGI doesn’t really help either, and the CGI is terrible almost throughout.

That they will triumph in the end is a given. That we will still care by then is not. That relief at the end is the primary emotion felt is not a good sign, but at least it’s over.

The great, dearly departed movie critic Roger Ebert once said that no good film was ever too long, and no bad movie was ever too short. It Chapters 1 & 2 can boast of being one of the worst and best longest and shortest good / bad horror film of all time, that fans of the first flick should watch, but no-one else, including the actors involved, because they might be a bit embarrassed.

--
“Something happens to you when you leave this town. The farther away you get, the hazier it all gets. But me, I never left. I remember all of it.” – It Chapter Two