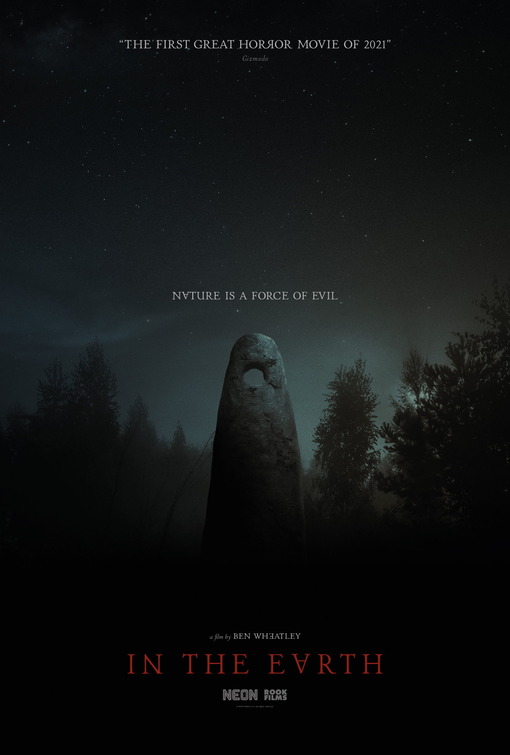 Doesn't look ominous at all, not in the slightest

At last. Now we’re getting the real pandemic movies starting to come out. Not just ones that people fall over themselves backwards saying shit like “a story with added resonance because of the global etc etc” that were actually made three years ago and languished on a shelf.

This was made in England in August of last year, 2020. You couldn’t get more pandemic than that. The only way would be if you had Boris Johnson himself stacking the bodies high when hundreds of thousands of people needlessly died.

It’s been a wild ride. Martin (Joel Fry) is a scientist trying to get to somewhere where another scientist is doing something. People are adhering to social distancing and masking up and all that crap, but it’s almost like the restrictions are more intense, in that either they’re being mocked, or in this version of reality, the virus is even worse than our one.

To get to this place that he has to get to, Martin has to follow a park ranger called Alma (Ellora Torchia) for two days as they hike into the wilderness. There are not meant to be other people around, but there are signs that people have been camping.

And then they’re attacked, and their shoes / boots are stolen.

There is meant to be something supernatural happening, but the real problem, like the problem many of us face in our lives beyond the presence of supernatural entities, is that there is an absolute nutter in the forest called Zach (Reece Shearsmith). Zach is polite enough, but it’s pretty obvious immediately that he is planning on killing, torturing or even something worse Alma and Martin before too long. The curious thing, or perhaps the irrational thing is that, like in many other movies, our protagonists despite being scared, and despite being repeatedly assaulted, tortured, stabbed and having toes cut off, they stick around far longer than a reasonable, rational person would bother.

So Zach starts off polite enough, but the full range of his nuttiness comes out when he starts talking about his various ways of worshipping the presence in the forest, some kind of spirit or entity that, I dunno, wants something vague. Zach tries to worship or communicate with this being by knocking people out, stealing their shoes, putting them in white smocks, putting ovals over their eyes and taking photographs of them.

This nature spirit is apparently a big fan of nature photography and captive people being tortured, I guess. He decides he needs to cut off Martin’s toes for some reason, and while Joel raises some reasonable objections, he lops them off anyway, making it even harder for Martin to get around.

If and when they get away from this lunatic, they strive to find their actual target, being Dr Wendle (Olivia Squires). It was never clear to me why they thought getting to her would mean they were safe from Zach, but that’s what they do. The moment they find her, though, it’s obvious that she’s just as delusional as Zach; it’s just that she’s more scientific about it. She strives to communicate with the presence through flashing lights and sound, which is why she’s playing the keyboards a lot, all the while Zach lurks in the background.

So. Alma and Martin are at the mercy of these two lunatics, both of whom only care about speaking or communicating with the being, and only Alma seems overly concerned with whether she or Martin survive. At one point where they’re planning an escape, she says they should run in opposite directions, because you can see her logic that Zach wouldn’t be able to chase both of them, and plus she isn’t hobbling along on 2 toes like Martin, so…

And Martin is like “um, but you’ll come back and help me, right?”

That made me laugh. This is not a comedy, though, oh no, it’s not a comedy. The only comedy Wheatley appreciates is the darkest kind, where people are tricked into killing their families, or they ask to be taken to hospital when they very clearly are going to be totally killed.

You could theorise that the flick is perhaps making its case that in the presence of the unknown (like a hitherto unknown coronavirus that’s killed nearly 4 million people), people cling to different extremes. One thinks that rituals and sacrifices can appease the forces of nature – the other thinks bright lights and an absolute belief that Science can triumph over all will get them through.

Let’s just say there are flaws in both arguments, though the real problem is that both Dr Wendle and Zach are pretty fucking daft. And they’re obsessed, utterly obsessed, with this being in the forest, whatever the fuck it actually is.

That’s why Martin doesn’t make a lot of sense in this flick. He seems like he’s there just so a succession of bad things can happen to someone. He also has this infuriating almost happy-go-lucky attitude that would seem to be at odds with the awfulness of the circumstances around him.

Alma is certainly the best stand-in for the audience, because a lot of the time she’s wondering why the fuck Martin is so trusting of either of the two lunatics, and why they don’t just get the fuck out of Dodge.

She is also the most likely to just get the fuck out of there (on her own), and possibly survive.

When a flick spends so much of its time focusing on the nuttiness of a group of people, or the extreme lengths they go to because of their beliefs, the point almost becomes that the existence or “realness” of the actual thing they’re obsessed with doesn’t really matter. To that end, considering how nutty the beliefs are here, of someone who maybe was a wizard or something who imbued a standing stone with a hole in it with his consciousness, and now watches people do stuff in a forest, you almost don’t need closure on that anecdote. The presence in the forest isn’t as dangerous as Zach’s actions or Dr Wendle’s beliefs that prog rock synthesisers are the way to speak to Nature itself. The Blair Witch Project, one of the most successful and irritating horror movies of all time, never even actually established what the actual fuck was going on with any certainty, and it never mattered. The ending is still as horrifying no matter what was doing the work of the devil.

Now, I don’t want to spoil whether there is actually something going on here or not, because I don’t think it ultimately matters. The last part of the film uses a bunch of practical effects to convey the very freaky experiences Martin and Alma, um, experience. If I was a stoner I would say that these hellish sequences are totally trippy, man.

Thing is, though, I’m not a stoner, so that shit is pretty much lost on me, plus I cannot stand strobing lights – I absolute loathe them, and there is a fair bit of strobing lights going on thanks to Dr Wendle’s “brilliant” research.

I didn’t hate this story, nor did I love it, but I respect it well enough. It’s just that past a certain point it just starts meandering about to no good effect, because it feels like they’re not sure how to end it or how to justify sticking around.

Joel Fry probably isn’t a household name, but I really, really like the guy. I remember him in Game of Thrones as one of the many people Daenerys had to destroy on her path to ultimate victory in Westeros, but he’s pretty memorable in everything he pops up in.

He was charming and well-received / needed in Yesterday, the surreal Danny Boyle flick about where a guy wakes up in a world where the Beatles never existed, and only he and two other jerks remember their songs. Fry played Rocky, the default ‘best friend’ role, who most memorably has the scene where he tells Ed Sheeran to leave rapping to the brothers, because he’s shit at it, and a ginger as well.

Ouch. Joel dials down the charm in this role, because mostly he’s just here to be used and abused, but I like him too much to not like his work here. He seems like such an innocent in a world soaked in blood.

Ellora Torchia as Alma is really strong here, and she “deserves” to survive this terror because she earns it and she’s never sucked in by the stupidity that infects the others like an airborne virus. She also gets a glorious primal scream in her final confrontation with Zach, which, surprising the hell out of me, ends not just with gory horror but with an attempt at a massive callback / punchline that made me laugh like a drain.

I don’t think the flick entirely works, but I enjoyed it well enough, and I think they did a solid job working at a time when film production must have been immensely difficult. Clint Mansell does the score, and his scores are always great and always welcome. I even loved the end credits, which had a weird photo development / Kodak vibe to them, and I watched to the absolute end.

In the Earth won’t make you want to go into the English countryside without good boots and a shotgun, but it will remind you that all that druids and folk singing and Stonehenge stuff was all about sacrificing people and animals for the dumbest of reasons.