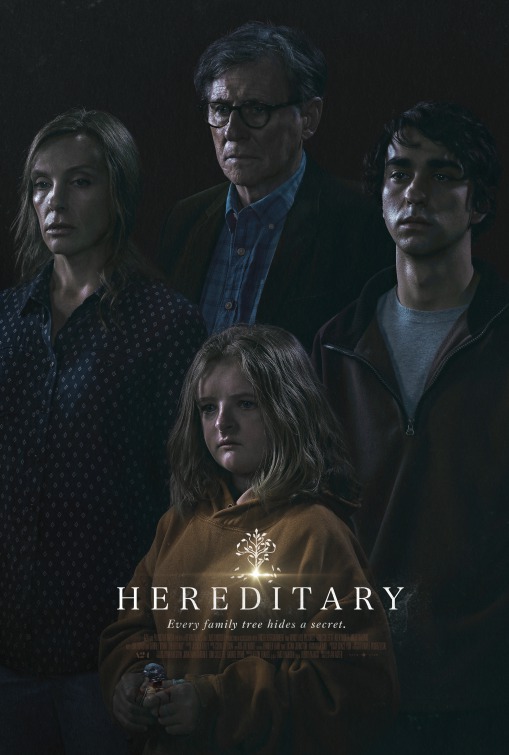 According to Tolstoy, happy families are all alike;
every doomed family however is doomed in its own way

That. Was. Utterly. Horrifying.

Since I sat through / endured Midsommar, and thought it was a crafty little flick, I thought I’d go back and check out Ari Aster’s first flick Hereditary, which I’d heard a lot about but declined to watch, figuring nothing good would come of it. But since I tricked myself into watching something as out there as Midsommar, by telling myself it was a documentary about the Midsummer festival Melbourne’s been having since the 1990s to celebrate our LGBTIQ brothers, sisters and non-binary identifying everythings in between, I tricked myself into watching Hereditary by telling myself it was a documentary about DNA and hereditable traits, you know, phylogenetic and epigenetic expression to the max!!!

Imagine my surprise when this turned out to be two of the most terrifying hours I’ve spent watching Toni Collette react to stuff.

I’ve read a few reviews since watching the flick, and I have to say I saw a movie very different from the one many of the detractors saw. What they saw was a weird flick that doesn’t make any sense and is very slow, and doesn’t have enough gore or jump scares or something.

What I saw was a horrifying story about a doomed family. The thing about doom is, it is inescapable, and generally to make you commit to watching something to the end, you have to at least be made to care about the people involved. That’s not where this is coming from. The Graham family doesn’t earn our sympathy or our compassion, but at least every few minutes I was alternating between “Oh my god, poor Charlie” to “ohmygod poor Peter” to “ohmygod poor everyone”.

When Hereditary begins, a family prepares to bury an unloved matriarch. During the eulogy, the deceased’s daughter Annie (Toni Collette) delivers a eulogy that, on one level, could have more succinctly be put as “Fuck you, mom, burn in hell” but which instead tries to ground us in the disturbed reality of what Annie comes from: a family where severe mental illness has destroyed almost everyone. Severe dissociative disorders, severe psychosis, hell for the people with it, hell for the people around them. We are sure Annie is not sad to see her go, but when she relates how she lost her own sibling and her father, you might think now she and her ‘normal’ family can grieve, take some time, and eventually grow closer.

But this flick is called Hereditary…

People die, both in films in general, and in this film. One of the deaths that happens here is one of the most horrific things I’ve ever seen. But death happens, and it doesn’t always make sense. We wrestle with the why of things, but we can’t dispute that they’ve happened. Here we doubt everything but can’t look away from the results.

With some of us, the trauma of death forces us to confront our own mortality, or that of the people around us, but it can also fracture our sense of self. Much of this movie makes it look like some of the main characters have collectively lost their fucking minds because of death, guilt, resentment or an unholy turmoil of other emotions, but is there insanity involved as well?

And it’s unfair, but it adds another layer to something permeated with layers of dread already.

Annie’s line of work is constructing complex dioramas, and throughout the film she is constructing tiny replicas of the sets that the characters themselves in the house are living in, and often the camera tricks us by showing scenes we’re not sure of, as to whether they’re transpiring in the house itself or in the tiny houses constructed inside the house. Annie’s reconstruction of a scene where one of her children dies is done in such a way that you’re not sure why she’s so cool with everything, seconds before she completely loses her shit. Parenthood, for some people, is really fucking hard.

It’s hard to play this kind of character and remain sympathetic. Toni Colette is a tremendous actor, and she brings a tormented level of energy to this flick that is honestly hard to watch. When she starts believing certain things are happening, and is begging, flat out begging her husband (Gabriel Byrne) to believe her, it’s agony to watch and listen to. Her scenes of grieving, which are all too frequent, are incredibly hard to watch and listen to, but in the way which enhances the film as intended.

We are given plenty of signals that we can’t trust what we’re seeing, or that what we’re seeing might be the delusional fugue-state hallucinations of someone in the throes of psychosis. But none of that changes what’s actually happening. We question whether there are other forces at work, other entities at play, and we dismiss it, thinking we know where the script is going.

We don’t know where the script is going. It goes somewhere weirder and uglier than I predicted. And even then it doesn’t change what’s happened; it just makes the horror that happened have more reasons for happening.

Anyone who remembers The Sixth Sense, the flick best remembered for its twist ending that triggered an epidemic of movies with twist endings, whether they made any sense or not, might remember that the mum of the kid who saw dead people was played by none other than Toni Colette. So she’s no stranger to playing a part in movies where she’s going to risk seeming like a raving lunatic. Or, like she played in the cable series United States of Tara, playing someone with a complex amount of disassociated personalities. She is great and disturbing at it, as much here as she is in anything else she does.

Beyond the horror of many of the scenes that we watch, the real work occurs in the scenes where nothing obviously demented, psychotic, catastrophic or horrible is happening: it’s when she’s telling someone what she really thinks. It’s in the eulogy where she describes her dearly departed mother as secretive, controlling, manipulative, corrosive. It’s in the argument where she yells at her son, Peter (Alex Wolff) and expresses her unexpressed rage at the fact that they can’t speak about what’s happened. It’s when she relates to a new acquaintance (the great Ann Dowd, best known currently for playing Aunt Lydia in Handmaid’s Tale, which is a red flag if a red flag ever existed) about why she thinks her kids resent her and don’t trust her.

And that story is a doozy. Imagine trying to convince someone that, in the middle of the night some years back, you’d awakened to find yourself doused in a flammable liquid, at the foot of your children’s beds, also doused in something, and that the thing that woke you was the match you’d just lit, but that it was totally not your intention, and it’s not like you went through with it, and why couldn’t the brats get over it, huh?

It’s even in the nightmare where she screams at one of her kids about how much she’d never wanted to be a parent.

There’s almost too much going on here, but however much or little there is, it’s also laden with a trauma-inducing soundtrack and agonising cinematography that really grinds our souls down on our way to the grave.

I was traumatised by this tale of family trauma and madness, and paranoid conspiracy well before the climactic scene, but the final stretch, which is the section most critics I’ve read had the biggest problem with (perhaps because it seems like it offers an almost ‘rational’ explanation for what’s gone on before, despite being fairly consistent with what we’ve seen transpire thus far) places a blackened, terror and poison-filled cherry on top of something that was already a dread-abundant monstrosity.

This is horror at its most devastating, because it strikes at the heart of the family; the one place we thought we would be safe. Quite often the danger in horror flicks is meant to be something from the outside threatening to come in: when the danger is the family itself, well, then we know we’re absolutely fucked.

Ari Aster is a meticulous filmmaker, which is something replicated as a motif throughout his films, especially in the set and art design. I think of him as a dark version of someone like Wes Anderson, or at least a more evil version. There is very little room to breathe in Hereditary, there’s nothing played for laughs, there’s no light or respite, so there’s not going to be a good night’s sleep following, if that’s what you were hoping for.

Again, like I said with Midsommar, I cannot recommend the flick to anyone, because I feel like it would be sadistic to do so. Recommending it to horror heads would be self-defeating, because invariably they scoff and say “eh, it was pretty tame”, and recommending it to people who don’t watch horror is just criminally negligent. Suffice to say that Hereditary kicked me in the head and in the gut repeatedly for two hours, but, hell, in my case it’s a bit of an improvement.

--
“ Don't you EVER raise your voice at me! I am your mother! You understand? All I do is worry and slave and defend you, and all I get back is that fucking face on your face!” – I’m sorry, I just loved that line so much – Hereditary.