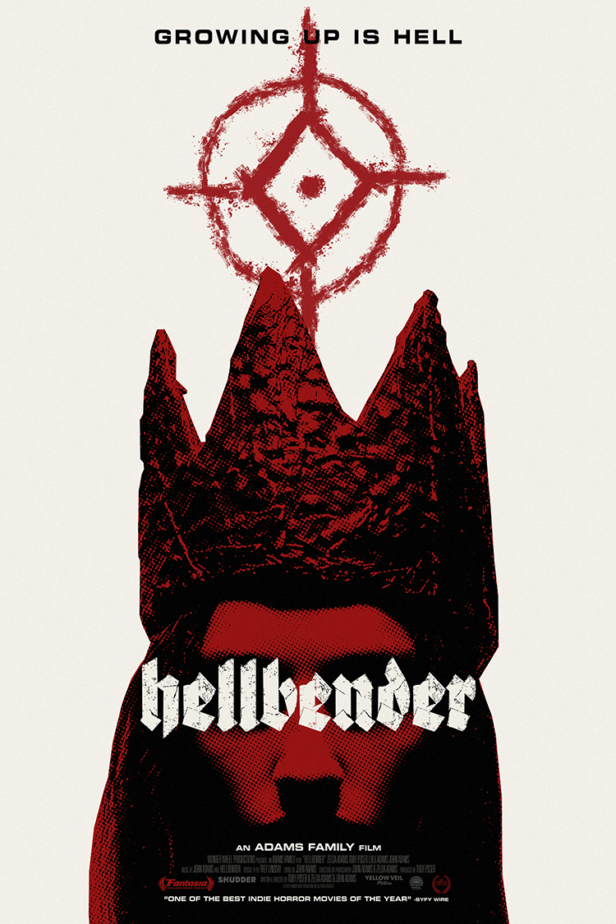 Parenting isn't that bad. Not most of the time

If hell, as Jean Paul Sartre once opined in between abusing amphetamines and literary groupies, is other people, then families are a unique form of hell. And to be trapped with your family during a pandemic, well, we keep discovering lower and lower circles of hell all the time…

But imagine if your family, all its members, were immensely talented actors and filmmakers. Well, out of these despicable last few years, you could have made something quite special if you’d really tried.

When I mention that this flick is a family affair, it makes it sound like an amateurish set of home videos. It is nothing of the sort. Before I get carried away – I’m not implying this is the most heartwarming and uplifting movie made since Schindler’s List – I am however trying to say that this is a quite accomplished and pretty well put together horror film made by people who know what they’re doing, and they do it very well.

Yes, on the other hand you could see this as a director’s audition to try to convince metal bands to let the Adams – Poser family make all their next album’s film clips – I can see them making clips for Mastodon or Opeth or Baroness quite easily.

A lot of this flick has that vibe, and not only because the two main characters, Izzy (Zelda Adams) and her mother (Toby Poser) play doom-heavy music with lots of make-up on in their spare time.

They have a lot of spare time. They are a mother and daughter living in rural isolation. They play music, they do foraging stuff, they seem to get along okay, they do arty stuff. It seems like the perfect life if you like that sort of thing. The mum seems to fear… something. Either she’s worried about Izzy straying too far from the property, or she’s worried about something encroaching upon their hillbilly paradise.

Of course I’m leaving out the very beginning of the flick, which shows an array of women trying to hang and burn a woman that looks a lot like the mum, in those pilgrim / witchburning times, and yet it seems like they didn’t get their wish if she’s swanning about in the present age.

Izzy is a teenager, though, and bored, which is a dangerous combination. It seems like she’s never spent time with anyone else other than her mother. It could be because she has some kind of allergy or dangerous immunity condition, but like in real life that’s just some bullshit parents make up to keep their kids obedient.

As is inevitable, Izzy finds some teenagers doing some dumb stuff, and is drawn to them, and knows enough to keep this from her sainted mother. Of course a teenager would want to hang out with other teenagers. No matter how awesome one’s parent / parents are, you seek out peers, to compare, contrast, drink and have sex with etc.

I hesitate to say that it’s natural, as in a natural curiousity and urge, because this film is not about the natural urges all people might possess. It is, after all, a horror film.

That’s not to say that the mum’s actions aren’t understandable. Most parents, not all, but hopefully most, strive to protect their kids, keep them safe. That urge, in competition with the kid’s urge to embrace the outside world, is a relatable tension many parents can grasp.

But what if the problem, the issues at stake are far more catastrophic, potentially? What if what you’re really doing is protecting the outside world from your kid?

By the time the supernatural elements predominate, we already have a good sense of these characters, their closeness, their unease. They are, after all, a mother and daughter playing a mother and daughter, through some much darker lens. Once the bodies start piling up, and the mother’s real fear comes to the fore, well, it’s less relatable, but it makes a kind of darkly comical sense.

Though we assume we’re dealing with witchcraft, witches, general witchiness or the more appropriate Wiccan label, hellbenders, like the title of the flick, are something different from witches. Something somehow worse. The mother is a hellbender, capable of some monstrous stuff, but so is the daughter. It’s something, like becoming a surly teenager, that you age into. The mum is worried that she has delayed perhaps too long in teaching her child how to naturally do what she’s going to do without being discovered by the world, but it might all be too late.

This isn’t really a message movie, unless the message is “if you protect your kids from the world for too long, they’ll end up killing people and imprisoning you anyway”. Perhaps you could see it as a sly commentary on the kinds of fundamentalist lunatics who homeschool their kids for so long that they grow up to be profoundly unsocialised weirdos who can never hold down a job but can tell you all the numerals in Pi up to a million places accurately.

Even that feels like a reach. Horror flicks don’t need to justify their existence, if they get the location, the premise and the horror right. That being said, this isn’t a straight-forward horror flick, in that though it ends up being quite gruesome, it’s not about jump scares or horrifying gore.

Thought there’s so much blood.

It’s really about the relationship between mother and daughter, complicated by how they live, further complicated by the fact that they’re not human, and that their life cycle is a pretty ghastly one. We bring kids into this world to outlive us, to share our values, to perhaps one day have kids of their own.

But it’s a bit more complicated if they have to eat us in order to truly shine.

I cannot praise actual mother and daughter playing mother and daughter here enough. To me, even though she definitely didn’t, watching Toby is like watching one of the legendary women from L7 deciding they wanna make some movies with their families, and completely nailing it. Whether it’s rocking out and singing like a demon, or eating stuff out of nature that shouldn’t be eaten, or being tender or fearful with her daughter, she nails each and every scene.

And Zelda as Izzy, the kid, goes from being a sweet, charming kid, to curious teen, to monster in a believable but still shocking character arc. She’s great in every scene as well.

It’s funny, to me, in a scene where she is befriended by some dodgy teens doing a home invasion on an adjacent property, that the kid she bonds with, somewhat, is played by her actual sister, being the fourth member of this Adams-Poser family. There is enough snark and sibling rivalry stewing in those scenes to carry its own movie.

If I have a criticism, and I do have only one, it’s that I didn’t love the ending. That’s not really a criticism, that’s just a difference of opinion. It’s their film they can finish it whatever way they like. It just didn’t feel like the culmination of what we’d been watching, even if it logically made sense given where the story was going.

This is without doubt one of the better horror flicks I’ve seen on Shudder in the last two or so years, but it’s also quite a remarkable achievement on what I’m guessing was a miniscule budget. For a low budget horror film, it doesn’t feel like a low budget horror film at all. The trippy scenes and (perhaps overused) over-exposure effects and the like most of the time look professional and controlled, rather than desperate and random.

I loved Hellbender, and I look forward to seeing more great stuff from this talented family, whose home movies are way better than your family’s home movies, that’s for sure.

8 times people though should be wary of these crafty fuckers, just in case out of 10

--
“If you break my heart, I’ll devour you.” – that is, after all, what parenting is all about - Hellbender