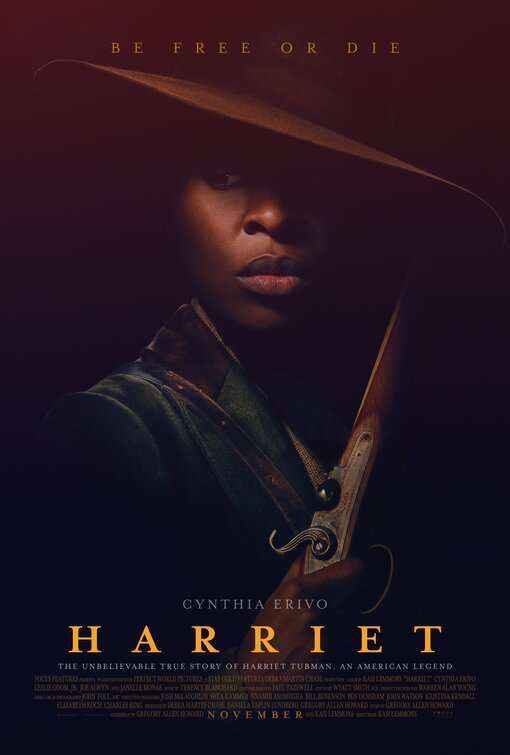 Coming to free the downtrodden in a town near you

I had heard the name of Harriet Tubman many times in the past, but never really had known her achievements in life, even as I could see she was venerated in death, with good reason. This film here called Harriet, which you can safely assume is about her, tries to summarise an extraordinary life in under two hours, and, I’ve got to say, she did a lot.

Cynthia Erivo plays the title character, and she plays the role really well. Harriet is pretty much depicted as a combination of Joan of Arc (a warrior chosen by God to liberate her people) and Moses (chosen by God to set her people free). She has epileptic fits / visions that show her the future, and warn her of danger. She is convinced God is guiding her. A more skeptical acquaintance notes in his journal “potential brain damage” when he hears her tale of wonder and liberation.

And what a tale it is. Living on a slaver’s farm in Maryland in the 1850s or so, so before the Civil War, her position is precarious. For some reason, her owners fail to treat her with the respect and dignity she and all her family deserve but never get, seeing as by law they are considered to be livestock. Her cruel owner is replaced, through death, by an even crueler owner, being the son, Gideon Brodess (Jon Alwyn), complete with sadistic eyes and an endless capacity for torment. I don’t care that he didn’t exist. Slavery required structures, laws and a whole lot of awful people to continue as long as it did. Sometimes you need to embody those ideas and horrors in the person of a Southern dandy who is anything but a gentleman, just so the audience can remember what the ethos of white supremacy looks like in person.

She escapes north, travelling to Philadelphia where she has relative safety. But that is not enough for this sterling woman. She cannot rest, or God won’t let her rest, until she saves as many of her family members as she can. So the journey back and forth, back into hostile territory, perilous as it is, is one she makes countless times in order to save almost everyone she knows.

Though she is remarkable in and of herself, this endeavor required the help of others, so we are introduced to the rudiments of the so-called Underground Railroad, the network of abolitionists, freed former slaves and opportunists who would ferry countless souls to safety up north.

As the film makes clear though, for many of these slaveholders, the loss of their slaves represents a cruel blow upon their finances, and the viability of their business enterprises. The slaves themselves are assets worth so many hundreds of dollars, and their labour, which can’t be replaced by working people, because that’s just not how we do things down here in the South, means these good white people could end up destitute. We can’t have that. They band together to, I dunno, randomly kill Black people, threaten each other, vow to capture and execute Moses, who they don’t realise is actually a woman, and a former slave at that. They convince themselves that this liberator of slaves would have to be a white man in blackface, because surely no former slaves, let alone women, could organise such an enterprise.

For such an amazing woman, life naturally delivers a multitude of disappointments and constant setbacks. The husband she comes back in secret to save is less than constant in his devotion to her. The sister she comes back to save can’t leave until she figures out where one of her daughters has been sold to. All along, Gideon pursues her ceaselessly, with the help of a tracker / former slave who seems to hate the slaves as much as his white masters do, with the excuse of profit as his motive.

Of Harriet’s allies, well, it would be unfair to point out that they aren’t all given that much to do other than be amazed by Harriet. Leslie Odom Jnr gets to play second fiddle yet again in period costume, not as Aaron Burr, but as freed abolitionist William Still who connects Harriet with the railroad. The luminous Janelle Monáe plays a somehow wealthy boardinghouse owner who’s never known the horrors of slavery, and thus feels comfortable mocking Harriet upon first meeting, but soon becomes an ally. The great Vondie Curtis-Hall plays a (real life) Methodist reverend who gives safe harbor to those desperately in need, even though in his sermons he tells his parishioners, mostly slaves, that running away from their masters is a sin.

In practice, though, he is saving lives from the ugliness of human bondage. Harriet’s dad is played by Clarke Peters, who I waxed rhapsodical about a few weeks ago after watching Spike Lee’s Da 5 Bloods. He doesn’t get a lot of screen time here, but he’s great even in tiny bite size chunks. At one point he wears a blindfold in order to honestly be able to say to slavers that he hasn’t seen any of his family who might be on the run. It might have been played for laughs, but there aren’t many laughs in epics about slavery.

Not that this really has that much of an epic feel. Other than a somewhat cliché montage set to Nina Simone’s overused Sinnerman, the movie feels up close and intimate with Harriet. It doesn’t have to embellish her much at all beyond the official record of what she got up to in her time. The strange thing is, the film’s focus remains squarely on her activities prior to the Civil War, and then about two minutes on a raid she led during the war that freed hundreds of slaves from a plantation supplying grain to Confederate troops. No slaves = no food for stinky troops. And apparently she spent the entire war as a nurse and spy helping the Union as best she could, and then after the war fighting for women’s suffrage. And yet those parts of her story are relegated to epilogue text on the screen. Wouldn’t that stuff have made just as compelling, if not more so, viewing as well as the story of people trying to get north to safety?

That’s not to imply that I didn’t enjoy the flick, which I very much did, and I acknowledge that criticising a flick for not being a different film with different scenes is pretty unfair and unhelpful. I just feel like there’s so much of her story that they left out that’s even more fascinating than some of the stuff they left in. I guess when a person’s life is as “big” as a legend like Harriet Tubman, there’s bits you leave out just to keep the running time down to two hours.

The thing is, though, surely some people deserve the epic treatment, coupled with an epic running time. If I can sit through nearly three fucking hours of a musical about Alexander Hamilton, or the four plus hours Steven Soderbergh devoted to Che “I’m on the t-shirt of every undergraduate in their first year of university” Guevara, then I could have afforded to see a film that covered the length and breadth of her amazing life.

There are scenes where she’s in the room with other titans of her era, in the abolitionist arena, but little if anything is said either by them or about them, which is okay. As in, we see actors playing Frederick Douglass and John Henry, both with amazing stories and legacies to their names, but they’re barely namechecked. I guess the important thing, from our perspective, that we’re more focused on the fact that Harriet got to speak to them, in front of them, and they listened, and nodded their heads, so it counts as a win?

I can’t say enough about Cynthia Erivo’s performance, which is pretty tremendous. In a lot of scenes it feels like she’s elevating underwritten material. I myself am not a person who gets the religious experience much, if at all, but I can appreciate a character for whom it represents the be all and end all, and I think the performance finds the right way to make it believable, heartfelt, but not alienating to an audience made up of godless heathens like me.

Another performance I really enjoyed was that of a rascal who initially works to capture other slaves, including Harriet, but has a change of heart. Walter (Henry Hunter Hall) does a lot with a little, and a funky hat, and really represents a chaotic element for much of the story before he grows a conscience. The guy could play a Loki character in a Hiddlestonian heartbeat, no sweat.

Overall, while it might not have felt that deep, I really enjoyed Harriet. I am predisposed to enjoying films where people fight against the evils of slavery and succeed, and not only just for themselves, but to save the people around them, and all the oppressed in general. Harriet does the story of Harriet Tubman some justice, which is sometimes all we can ask for in this tiring and exhausting world where a lot of people still can’t seem to agree in total whether Black lives should matter. Which is not something we thought would still be an arguable point in 2020.

--
“You'll die right here. On a frozen, blood-soaked battlefield, the moans of a generation of young men in your ears, dying in agony around you, for a lost cause. For a vile and wicked idea! For the sin of slavery! Can you hear them? God don't mean people to own people, Gideon! Our time is near!” - Harriet