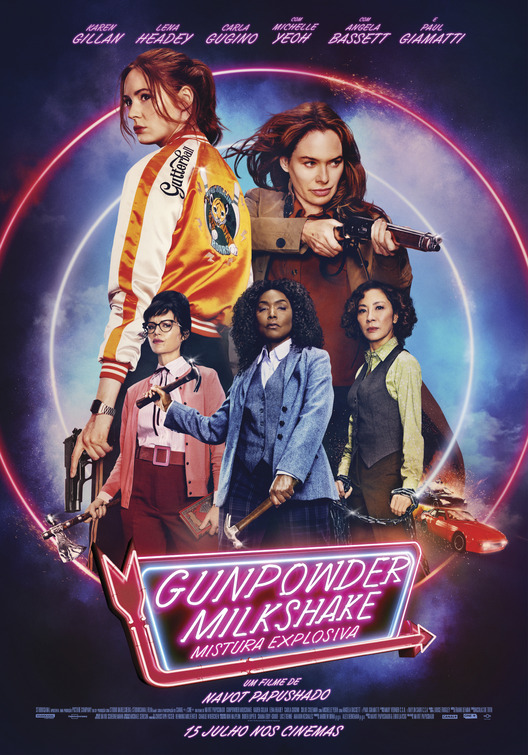 Fuck with the sisterhood, get your balls crushed by hammers!

Well. That movie had a lot of stuff in it.

It had a lot of shooting, a lot of stabbing, a few cinema legends in key roles, and a lot of colour and momentum.

It’s also pretty silly, which is something I can appreciate.

I mean, John Wick is pretty silly, but it takes itself deadly seriously. Gunpowder Milkshake does not. Probably cannot.

It’s not entirely ruled out that this film doesn’t exist in the same universe as the John Wick flicks, but it might as well. It’s also almost cartoonishly similar to a movie Clive Owen starred in that absolutely died at the box office called Shoot ‘em Up too many years ago now. It’s a world seemingly ruled by assassins, with very few civilians in between them. No cops seem to exist whatsoever. There are massive criminal organisations with masses of people in them, and every business or building seems to be connected to them, but the main difference here is this isn’t meant to feel deathly important. And everything isn’t filmed at night in the rain with a blue filter.

Our protagonist Sam (Karen Gillen) is also not trying to get revenge on crims for the death of her wife / dog / guinea pig, though she is angry, and stern, though she is trying to protect a little girl mixed up with the shenanigans going on.

What Sam is angry about is being abandoned, she feels, by her assassin mother (the almost always awesome Lena Headey, of Cersei Lannister of Game of Thrones fame) fifteen years ago. That abandonment has fueled her anger, which she’s channeled into being The Firm’s number one killer.

It is not clear what The Firm really is, other than The Patriarchy. In this flick The Firm is represented by Paul Giamatti, who took Sam in when her mother disappeared, and employed her for The Firm’s benefit. She is sent on a job where she kills a whole bunch of people, presumably just before the movie started. One of those people has a father who is quite upset about this. I would have thought all of the people Sam kills, or that The Firm kills could potentially have parents that are saddened by their deaths, but it’s only this one, to Papa McAlester (Ralph Ineson), that seems to matter.

Papa McAlester wants revenge, and The Firm, being a boys’ club only, they are happy to feed Sam to the wolves in order to keep peace with their rivals.

Sam doesn’t play that shit, though, so it’s up to her to enlist the aid of other murderous women in order to stay alive long enough to protect, um, whatever the girl’s name is, um oh yeah Emily (Chloe Coleman).

Sam has to kill and maim a lot of people to achieve that, but thankfully most of those people are pretty shit at their job, and she’s pretty good at hers. What ensues is long sequences of Sam fighting people (contrived reasons are given to stop people constantly shooting at each other, which makes for more inventive fight scenes) with whatever comes to hand, and then, even “better”, contrive a way to make it even harder for her to fight off multiple opponents by temporarily paralyzing her arms.

So it’s the fun silly kind of murderous action, rather than the serious, grim, po-faced stuff. Does it actually make a difference? I think it makes a difference tone-wise, and in terms of enjoyability, but if I was looking to “get” something out of this flick, it was potentially a very different thing from whatever people (let’s face it, mostly middle-aged men) get out of watching Middle-Aged Men kill a bunch of guys without changing facial expression. I’m not even going to mention them; it’s all of them, or 90% of them.

This is more like the stuff Jackie Chan used to do in his prime (probably not as razor-sharp in choreography), or what used to be called Hong Kong action flicks of the 80s, 90s, where the point wasn’t that Jackie was an Immortal Righteous Badass killing people like they’re bugs, but that he wanted people to laugh and marvel at what he and his co-stars were doing rather than counting of how many faceless henchmen were being killed 57, 58, 59 - 100!

To that, it also brings in the kind of gun focused action that came after that era made famous overseas with the likes of John Woo and Tsui Hark, so, yes, the people who made this watched a lot of old movies in order to construct this, and good luck to them.

It’s not a coincidence Michelle Yeoh is in this, but then I guess there are no coincidences when you’re putting a movie together. And Angela Basset is in it, and Carla Gugino and and and.

Well, there’s a formidable cast there on the side of the Sisters. Sam at some point has to get new guns, as if the old ones weren’t just as capable of shooting legions of people, and she is sent to a library, more of a castle, really, to exchange them.

The women running the library speak in the clumsiest book metaphors and have the most gorgeous library in existence. Every book is massive and bound, so that something can be ‘hiding’ inside them. Sometimes it’s guns, sometimes it’s knives, sometimes it’s gold bars, it doesn’t really make sense. I could not figure out if the library operated as a front as a library hiding their real business as weapons dealers, or whether enough of the library was real in case someone wandered in off the street? If the public did come in, how would they not accidentally find gold bars and rifles and shit in the comically oversized books. If the public didn’t come in, then why construct such an elaborate subterfuge, with all these gorgeous rooms and themes that no kids would ever see?

Pointless questions I admit, because other than one of them acting all stern when Sam first comes through the door, the obvious thing is that Sam knew them as a kid, and of course it was the happiest time of her life. Three fairy godmothers, I guess.

There is the mildest of gay subtexts at play here, all expressed only with hand holding and intense facial expressions, and on the one hand, the implied relationship between Madeleine and Florence (Carla Gugino and Michelle Yeoh’s characters) and between Scarlet and Anna May (Lena Headey and Angela Bassett) seems cowardly, in that that make it seem so banal, but on the other hand I thought, great, let the ladies show they’re Amazons by showing how happy they are without men fucking up their lives.

I dunno. I guess if there’s some other bond that matters in the flick, it’s between Sam and Emily, and I guess we’re meant to see it being like Sam trying to protect an innocent kid (as opposed to all those guilty ones) from the shitty men of this world, as well as trying to protect the young version of herself, to stop her from becoming a weapon for use and abuse by The Firm. It’s not very convincing, but sure, it’s not like any decent or sane person wants to see a kid come to harm.

Karen Gillen is really great in this, they’re all pretty great, but she has to carry the flick if anyone is going to, but it’s great seeing Lena Headey kicking much ass and killing somehow fewer people here than she managed to kill off in Game of Thrones. Gillen’s American accent maybe is a tad distracting, but she is great at embodying the kind of mentality that action flicks demand: everything I’m doing is deadly serious but ridiculous at the same time. I think I enjoyed all the action sequences, but I think my favourites have to be the fights against the guys she used to previously work with, in the bowling alley, and then the doctor’s office. Oh, lord, the doctor’s office fight.

The doctor’s office / hallway one is particularly great, because she has to somehow kill / maim a group of guys she’s already hurt pretty badly, who are stumbling around with crutches, wheelchairs and the like (making it seem like she’s very anti-disabled people, almost as much as the NDIS and the current Federal government), but she can’t use her arms other than by swinging them about. She gets Emily to attach a gun to one hand with tape, and a knife in the other, and she just has to wildly swing her limbs around until it works.

I honestly think the pseudo-feminist-female-empowerment stuff is utter bullshit; it’s the thinnest veneer of that stuff still solely in the service of the predominately expected male viewer, but I will still enjoy watching the inevitable sequel where the (remaining) women have to band together to smash the last remnants of The Firm / Patriarchy that’s been controlling them their whole lives.

I hope it’s as cheap, silly and nasty looking as this bizarre flick. It was shot in Berlin, but they’re pretending they’re in the States. It’s directed by a 40 year old Israeli guy who’s never made an action flick in his life, who also doesn’t have the right editor to make it look crisp, but it doesn’t matter too much. It has Michelle Yeoh, but never puts a sword in her hand. It’s a Netflix movie also released in cinemas, but I can’t find it on Netflix in Australia. It’s all diners and retro mobiles and guns with knives in them and knives with guns in them and guys walking around with giant hammers, and all of that is just to look funny and supply legions of extras to die for our pleasure. None of it makes much sense in ‘our’ world, but it makes perfect sense if it’s set in John Wick’s world, but the protagonists are all on MDMA (except for Sam, who’s clearly in the k hole).

I had a ball, but I do feel a tiny bit dumber because of it.

--
“You are an incredibly impressive young woman. There's not a single person on earth that I'd rather kill people with.” – something I wish I’d had the chance to say to my daughter - Gunpowder Milkshake