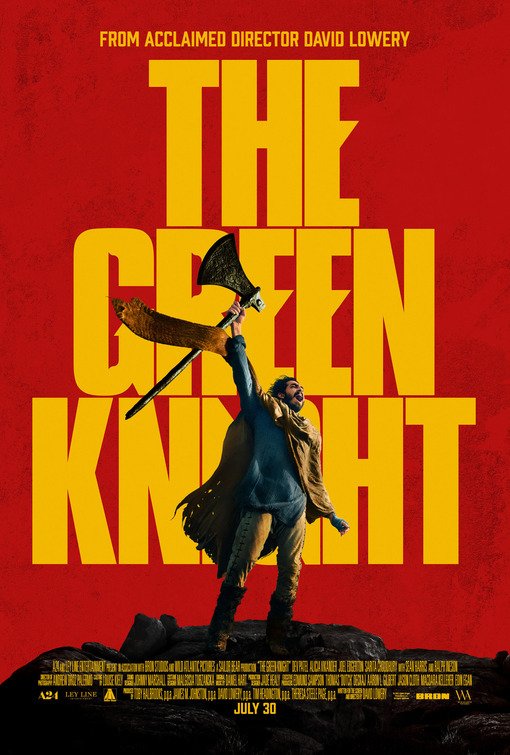 I didn’t really get this flick. A bunch of reviewers liked the fuck out of it, and praised it as one of the most visionary flicks of the year, but I was mostly baffled by it.

Based on a story written 600 years ago or so, this would seem to be the odd kind of quest film where the hero, who starts off a callow and debauched piece of shit, pretty much gets nothing right for two hours on the path to fame and fortune, and gets nothing in return. Maybe had I been in a different mood its perversity would have greatly appealed to me, but I was in the mood I was in, and I can’t change that. Maybe subsequent viewings will give me different thoughts and feelings about it, but at the moment it leaves me pretty cold.

I like to hope that it isn’t because I’d formed a picture in my head of what it was going to be like, or what it “should” have been like instead. Though long a fan of stuff like Excalibur and the Arthurian legend stuff, at least when I was a kid, I wasn’t expecting it to be a straight retelling or a ginned-up contemporary take on sword and sorcery epics and such. I think Dev Patel is extraordinary in almost everything he does, and he’s probably perfect in the role. It’s just that the bafflement he wears on his face for all of the flick is the same bafflement I feel having watched it.

When the story opens, Gawain (Patel) wakes up hungover next to his working girl lover, Essel (Alicia Vikander). He spends his days drinking and his nights fucking, which is probably what the good Lord intended when us humans were intelligently designed. But it’s Christmas, and he has to go spend time with his uncle, who happens to be king (Sean Harris).

The king laments that he does not know his nephew, and the nephew pretty much points out “not much to know, haven’t really done anything yet”, probably with a bit of shame in his voice.

But lo, who appears in the king’s hall, wanting to play a Christmas game, but the Green Knight! He passes a note saying he wants to play a game where someone strikes him, and then in a year’s time, he gets to return the blow to the person who did it. Plus they get to keep his massive axe, presumably for a year. The knight is, like, a tree in the shape of a man, so he’s not a normal looking person.

Wanting to impress his uncle, Gawain wants to play, lops off the knight’s head, and thinks “instant legend!” But then the knight picks up his head, and says “see you in a year”, and off he goes.

In some ways you’d think Gawain could have a year in which to do something meaningful with his life, but he spends 360 or so of his remaining days doing exactly what he was doing before: ie drinking and whoring.

When you’re on a good thing, stick to it. He gets kitted out, wears a nice new magical sash his mum (Saritha Choudhury) enchanted for him, then sets off up north somewhere.

He doesn’t really know where he’s going, he hasn’t learned to fight or live off the land, he can’t make a fire to warm or dry himself, he loses his sword and horse quite easily to some thieves, who also steal his magical sash. He falls down a lot.

He sees some fantastical stuff, and is befriended by a fox, that only after ages eventually talks to him, revealing who she is and what she’s trying to do, which is protect him.

Oh, he also meets a ghost (Erin Kellyman) who lost her head, and agrees to help find it only after asking what’s in it for him. He helps her out anyway when she complains a bit.

Later he bumps into a lord (Joel Edgerton) who invites him back to his place, where the lord’s wife (also Alicia Vikander) easily seduces him, and I wish this wasn’t true, but she gives him another magical green sash which mops up the, um, evidence of their tryst.

The lord also wants what his wife had, at least getting to caress Gawain’s face and kissing him, but that’s too much for Gawain, who stumbles towards the green chapel, to meet his fate.

I never really understood why. The film gives us a summary of what would happen if Gawain keeps the green magical sash on, in that he will soon become king, his child with Essel will be taken from her, she will be cast aside, and he would be a failure of a monarch. That all sounds great, and it inspires him to take a different path, but before seeing all that, I had no inkling as to what he thought would come of his travels.

If he thought he was going to his death, why did he not seek to avoid it, by, um, not going? If he thought it would make him a renowned and famous figure, an honourable knight in the eyes of people who presumably matter, why did he think that? As far as I could tell from the moment the Green Knight picked up his head, Gawain thought he was fucked, because while the Green guy could clearly survive a decapitation, Gawain probably couldn’t. Seeing as Gawain isn’t a knight, why would he think feeling obligated to get his head lopped off would be the profitable thing to do?

I’m not so dense that I don’t understand that it’s his sorceress mother who’s orchestrating all these events, even from the start, by summoning the Green Knight and kicking things off. I guess she wanted some way for Gawain to somehow become king. I’m not sure how any of this, or him going to the chapel, would result in that, even if it does somehow work in Gawain’s cowardly vision.

And, seriously, the way he freaks out totally and chickens out prior to that vision is hilarious, and probably the only realistic or believable thing in the whole film, but it just made it more obscure to me as to why this character would have bothered to do the honorable thing in the first place.

I guess the original story when written was a bit of a piss-take on the chivalric code and the notion that heroic deeds like losing all your shit while travelling somewhere to have your head cut off would be worthy of praise, song and fame, but at least in that story Gawain returns wiser even if everyone around him is still pretty dumb. Not to spoil anything here, but it seems unlikely that this Gawain learned a fucking thing other than that he should never have tried to impress his uncle by cutting off an unarmed man’s head.

I never understood why the king and queen were portrayed practically as dead people. That freaked me out a bit, especially since the queen was played by the same actor who played Lysa Arran ruler of the Vale in Game of Thrones, and the last time I saw her she was being flung out the moon door by Littlefinger, so she’s really come up in the world, playing a cadaverous auntie here.

I wasn’t sure if everyone in the flick pronouncing “Gawain” differently was a bit of a joke, or whether I was going deaf or daft. The king-uncle pronounces it Gar-win, others pronounce Ga-Wayne! And the lord towards the end I’m sure called him Kevin in between touching his face ever so tenderly.

Okay, so the cinematography is great and the composition of shots is grand and some of the visuals are awesome, but it’s still me watching a cold, wet guy stumbling around Ireland in a yellow cape fucking things up for two hours, and it was a bit of a slog for me, and I don’t think I got out of it what others did. Even understanding what I did, and reading up on what some of the elements that were a bit perplexing actually meant, like that Gawain’s mother is probably the fox, and the blindfolded woman at the lord’s castle, ultimately don’t clarify things to an extent where it makes me care more or like the story more. A lot of what happens, in the course of the story in general and to Gawain specifically, didn’t really seem ‘real’ to me. It didn’t feel like anything mattered, or that it meant anything, and it could all have just been a dream at the end and it wouldn’t have changed anything or made me more interested.

There is something to be said for films that don’t follow a conventional course or traditional narratives, that still find ways to illuminate deep truths or, failing that, entertain us at least and give us food for thought through the struggle for meaning that we all endure. This film didn’t do that for me, but I’m glad that it’s somehow resonated with other people.

I only want good things to happen for Dev Patel, and seeing him fall about here like a newborn colt for two hours just makes me feel bad for him. Make him the next James Bond already, to make up for what he put up with here.

6 times as arresting an image as Gawain as a holy king but on fire is, it still didn’t mean anything out of 10

--
“This house is full of strange things. But then again, I see things everywhere that bear no logic.” – ah, so you’ve seen this film too, then? - The Green Knight