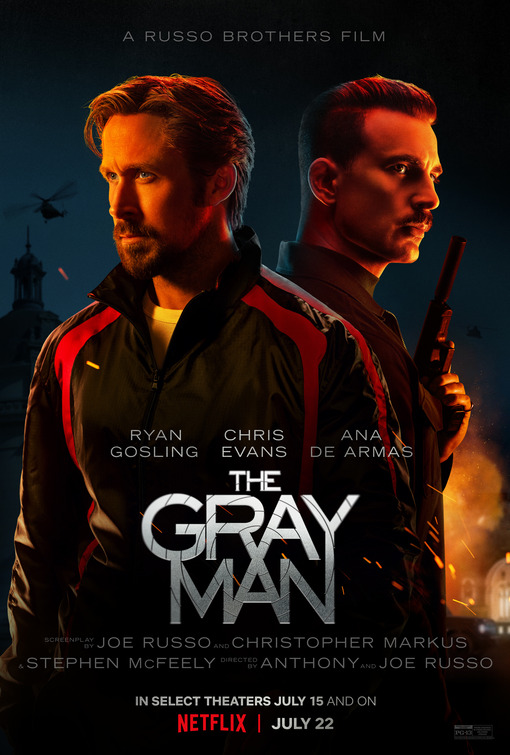 In a fight to the death, whose moustache will win?

So they were never going to make their money back. No-one is going to subscribe or re-subscribe to Netflix because of a dumb action flick called The Gray Man. They may resubscribe for a movie called The Beige Couch, which is about a demonically-possessed and very messy couch that slowly swallows whole an unfailingly polite Marie Kondo for an hour and a half, but I doubt they’ll do it for this.

Which is not a shame. Though, note to self: copyright the idea for the Kondo-eating couch.

This is pretty generic, but it is not unenjoyable because of that. It’s competent enough. They put the cameras in the right spots. There aren’t any wardrobe malfunctions, people remember their lines, no-one’s moustache falls off mid-diatribe. And in no way is the action genre updated, upgraded or advanced by the existence of this movie.

And that’s okay. The Russo Brothers have made more money than God with their Marvel movies, and you’d think they’d want to do something else with all their cachet and clout. Instead they make the lazy kind of thing you’d imagine someone without ambition or that much motivation would do.

That’s probably quite unfair. Maybe it was a labour of love for them, who knows. The fact that it’s pretty much identical to the last film they produced for Netflix (but didn’t direct) which starred Chris Hemsworth, being Extraction, I’m sure is just a coincidence.

This flick’s description will sound like the plot synopsis of at least 10,000 movies: a jaded assassin who’s very good at his job is forced to kill a bunch of other assassins because of something something and there’s a young girl to protect too.

No-one killed his dog, but they might as well have. Because he’s just going to have to kill everyone, isn’t he?

Ryan Gosling is the Gray Man of the title, at home with playing a blank, featureless expanse of a character whose tone of voice or facial expression rarely varies from one moment to the next. I guess you could argue it fits with the character, in the same way people argued that his flat performance was appropriate for the role of an emotionless replicant that hunts down other replicants in Blade Runner 2049, or an emotionless crim who kills bunches of people in Drive, or an emotionless crim who doesn’t kill bunches of people in Only God Forgives, or the emotionless robot imitating Neil Armstrong who first walked on the moon in First Man.

At this stage it’s a feature, not a bug. Of course he’s given looser, more emotionally-messy performances in other flicks, but he’s better known, I think, for being an absence rather than a presence.

One that’s very easy on the eyes, amirite ladies? Across from him is the also very attractive Chris Evans who, before he played America’s Ass in the Avengers movies, already had a career playing smarmy jerks in action movies. Here, he taps back into that energy and literally has a moustache to twirl as he makes his snarky comments and licks his lips in between torturing people, and saying out loud all the nasty things he wants to do to people instead of just saying it in his head like a regular psychopath.

That moustache though. It’s hard to say whether it’s a work of art or an abomination, but I guess that holds true for most/all moustaches. Thankfully the other characters take him to task for it, the best comment being calling it a “trash ‘stache”, which is so apt it hurts.

Between these slabs of testosterone labours not in vain another agent / killer called Miranda (Ana de Armas), who is really making a career for herself as an unlikely looking (as in, she weighs as much as a Chihuahua) but convinces agent when it comes down to killing faceless goons dead.

It’s funny that she did the same thing in the last James Bond movie with Daniel Craig, funny because this flick makes a bunch of references to the Bond genre in such obvious ways that it’s meant to come across as cheeky rather than fucking exhausting. There are even these musical stings which are so Bond it’s worthy of at least an eyeroll or two.

What this flick has more in common with though is probably the Bourne movies, at least the first one, in which someone is hunted down by their former employer, meaning they have to fight a bunch of other killers just like themselves before they can kill their way to the boss at the top of a corrupted agency. Except, despite the people being butchered / tortured etc, the tone is more playful and comedic, a lot of the time. This isn’t a grim existential exploration of the tortured consciences of CIA agents questioning their life choices. The “good” guy is a killer who works for the CIA. The “bad” guy is a killer who works for the CIA, but enjoys it more.

Unless it’s a comment against outsourcing, since Evans’ character is a contractor, in which case, point taken.

So this so-called “gray man” killed bunches of bad people, but in the initiating event, kills another gray man, someone who had evidence that someone within the CIA was corrupt. So now they want to kill Sierra Six (Gosling), but no-one else can seem to manage it, so they send in someone too evil even for the CIA. And he can’t manage to do it, so he finds the one person that would make Six give himself up like a murderous lamb to the murderous slaughter.

That person is a child, being the niece of the jerk who recruited him in the first place. We are meant to believe that an emotionless robot killer reembraces his humanity in the presence of a teenaged girl.

Maybe. I don’t know. Seems unlikely, but anything is possible.

Even with the girl’s impending doom hanging overhead, it doesn’t stop Sierra Six from basically just killing everyone in his path like a John Wick but without the suit or the arcane rules of a strange assassin’s underworld.

It’s not really believable anyway as real world stuff, but that’s not why we’re watching. That’s not why I was watching. I can’t pretend I went into this without my eyes open as to exactly what cobbled together generic shit it was going to be, and in that I was absolutely not disappointed. It was fun and entertaining and insane and it ended. It wasn’t too long (though would have been “perfect” under 2 hours), and never pretends to be less than preposterous, and hurtles along enjoyably enough. Evans as sociopath Lloyd has an absolute ball and it was a joy to watch him. He seems to really enjoy playing a bad guy. He has almost as much fun here as he did in Knives Out, where whole minutes of screen time are devoted to him telling every member of his character’s extended family to eat shit and die.

Also an alumna from Knives Out, Ana de Armas kills a whole bunch of people, which is enjoyable to watch, unlike in that recently mentioned film, where she only gets to kill one.

The funniest interlude or weird segue within the film is when a fearless and phenomenal professional called Lone Wolf, played by Dhanush, some Tamil movie star, basically wanders into the film, kicks Six’s and Miranda’s arses, achieves what no-one else could, but changes his mind at the last minute, mutters something about the people who tasked him not being honourable people, then wanders out of the film again, never to be seen or mentioned again or anything.

Did he… was he ever really there? Did we imagine this Indian heartthrob, this pinnacle of panache, this master of the masculine arts? Will we ever hear from him again? Call me!

I don’t have to justify liking this flick. All these flicks are dumb. One person can’t take out a private army, no matter how good they are, because private armies don’t patiently wait their turn and get killed one after the other, too frightened to act until it’s their time to die. They usually attack all at once, maybe kill some of their own people along the way, but kill whoever – whether it’s a lowly agent or the President of Haiti. It’s never about whether it’s convincing or not, it’s whether we’re entertained, and I was reasonably entertained.

This doesn’t need to be a franchise, but doubtless it will be.

The Gray Man. There are worse dumb action flicks out there. I guess.

--
“Extra ten million to the first guy to put a bullet in this Ken doll's brain.” – The Gray Man