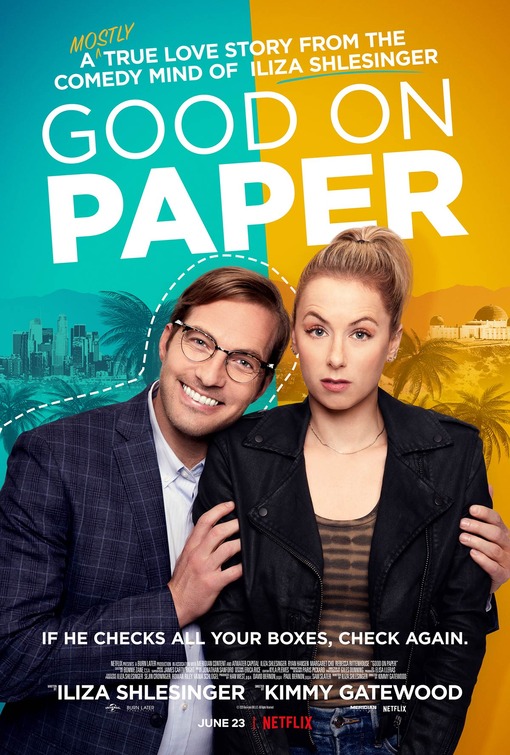 He looks happy, but she looks perturbed?

I would argue a good many things look good on paper. Fish and chips look good in paper, as opposed to on paper. A nice selection of native flowers in a carefully curated bouquet.

What doesn’t look so great on paper is the premise of Good On Paper, which, itself, begins with the title “This is a mostly true story based on a lie.”

That’s intriguing, isn’t it? Pulls you in? Raises your curiousity level?

Accomplished standup Iliza Shlesinger of the many specials on Netflix and the sketch comedy show that shares her name plays slightly less accomplished and more insecure standup Andrea Singer, in a movie about something that I’m guessing actually happened to Iliza in real life.

To whit, this flick exists as a “you won’t believe what happened to me” kind of story along with “this is the best way I can think of to get revenge against a jerk who jerked me around once” all rolled up into one delightful package. If the flick has three parts, the first two thirds work reasonably well, and the last third completely devolves into a mess that to me screams “we had no idea how to end such a story.”

Andrea’s standup is remarkably similar to Iliza’s standup, in that there’s a mixture of the personal and the broader movements in the zeitgeist, but here most of the time when there are scenes on stage she’s mostly providing commentary on the story we’re watching.

And what a story it is. In the middle of catching a flight and talking with a friend of hers on the phone about how useless a person would have to be to lose their boarding pass between getting it and the gate itself, a helpful stranger returns her boarding pass, that she seems to have misplaced.

How humbling. By some strange coincidence this helpful stranger happens to be sitting next to her on the flight. This chap looks like the stereotype of what a nerdy nerd would look like, but maybe from about thirty years ago. He has the glasses, sure, but also the kind of slicked down hair that looks like one’s overbearing mother just spat on their fingers and tried to slick an unruly bit of hair down.

Immediately, this guy Dennis (Ryan Hansen) starts talking about being a hedge fund manager who graduated from Yale.

That would be like someone bragging about clubbing baby seals or whale hunting. No one is impressed by that, if anything they’re appalled and completely turned off. Who gets wet hearing someone say “I’m a hedge fund manager, and a Brand Ambassador!”

But for whatever reasons, Andrea doesn’t mind that he would portray himself as one of the many reasons why late stage capitalism is so horrific, and pals around with him, just as drinking buddies and such, at first.

One of the places they go drinking is a bar owned by her friend Margot (legendary stand up Margaret Cho), who seems to drink more than she serves, but hey, she’s fun, and she’s got Andrea’s back. She mostly exists so that Andrea has someone to complain to or sound board some of the details of her relationship with Dennis, the longer it goes on, and the more elaborate his fictions become.

Oh, wait, is that a spoiler? Is it not profoundly obvious that Dennis is a lying shitbag from the start? It’s baked into the premise. It’s something we know the second the movie starts, and the second we see him talking about Yale.

I’ve met two people who went to Yale, and five who went to Oxford, in the course of my life. None of them mentioned it immediately upon introduction to them. And if it came up it came up in a context, like “I was working on a paper when I was at…” or “you’ll never believe the quantity of drugs I sold while at…” It was never “Oh hullo, I’m Professor Hawking, and I graduated from Cambridge, of course.”

Not that I think he deserves it, because if the person the Dennis here is based on is half the shitbag the guy was in real life, he deserves to be mocked with effigies and Halloween costumes, other than portraying him as something of a blank sociopath, he almost doesn’t exist as a character, and could have benefited from being more developed. Early on, before the grand revelations, he’s needy, but attentive, doing the stuff that personally hollow but emotionally intelligent manipulators do in order to stay in people’s good books. He’s never outright horrible to Andrea, and it’s clear he wants more from Andrea than she’s willing to give emotionally.

But once it gets to the stage where he’s telling her his mother is dying in order to stop her from going on dates with other guys, well, we know no good will come of this.

If you listen to a lot of true crime podcasts, which I don’t, but I listen to other types of podcasts where people talk about them, there’s a whole section of them devoted to lying jerks who lied to women, stole all their money, probably fucked their sisters as well before either killing them and shooting through, or shooting through and doing it all over again to other women in a new town or city. That isn’t really where this story goes, because the tone is light, it’s not rom enough to be romantic or com enough to be funny, so the notion this is a rom-com kinda falls apart.

Neither is it a drama, really. It just exists somewhere between them all and nowhere at the same time. We also get a bunch of scenes about Andrea trying to get acting jobs and failing, or being passed over in favour of someone younger and blonder, invariably her nemesis Serrenna (Rebecca Rittenhouse). Serrenna has her face on LA billboards, much to Andrea’s chagrin, and she has a great deal of resentment towards her.

It’s… not a good look for our main character, and it’s not meant to be. While we accept that Dennis is a lying shitbag, we’re also meant to think Andrea has her issues too, in terms of thinking other people are ‘stealing’ parts and have a profile higher than hers like it’s some entitlement on her part, which means envy is poisoning some of her relationships, and she just has to “accept” where she is in life.

I don’t know if it’s that much of a message, uplifting or otherwise, but it does mean the film is trying to say more than “lying is bad”, at least for this fictionalised version of herself. I don’t know how much of it is true, or how much of it is “Andrea needs to learn and grow as a person and accept that things are gong okay for her” as some kind of character arc.

Do we even need her to learn lessons, or talk about things, or come to terms with things? Well, maybe we do. I really don’t know. I don’t mind it as much, but it doesn’t enhance the last part of the film, where Andrea inadvertently gets revenge.

Margot decides to get Dennis really drunk, and then they “accidentally” and unintentionally damage Dennis in a way that looks horrifying but isn’t crippling, but then they double down and do worse. All Andrea wants to do is tell him she’s hurt by his lies, and that he’s an arsehole, and to understand why he is how he is, but I’m not sure any of that gives the catharsis either she wants or that she thinks we need.

Maybe we need closure on the anecdote, but the way they decide to end things with a strange court case, after Andrea seems like she’s being arrested by the cops, but then it seems like some kind of civil case? None of that makes sense, but it does make us privy to how much of Dennis’s behavior is faked, or at least acting, or at least some way that an alien simulates human emotions in order to get what they want out of other humans. It’s chilling and creepy and I don’t wish him well, but I don’t wish him any specific harm either.

It’s not as completely irredeemable as a lot of reviews are making out. I actually like spending time with Iliza and Margaret Cho as these characters: I just wish they were in a more interesting story, no matter how much of it is true. I find Iliza’s standup hilarious, and her energy onstage is infectious. I was also a big fan of her sketch comedy series, and often crack up whenever I remember some of the sketches, like the insane one with the nectarines, or the deranged captain who runs an airline intended to fail. This falls into the pigeonhole of the kinds of pseudo-rom-coms that Amy Schumer has been making since Trainwreck – self-referential paeans to accepting oneself as one is but also having the world accept that you’re awesome too, and that other pretty people sometimes have difficult lives too.

It’s not a message that resonates that deeply or loudly with all of us, but it’s still a bit entertaining.

6 times the fat jokes at Dennis’s expense, when that is the least of his crimes are a bit much out of 10

--
“For me, this story wasn’t about love at first sight.” – not if you’re being cuttlefished like that, it’s not - Good On Paper