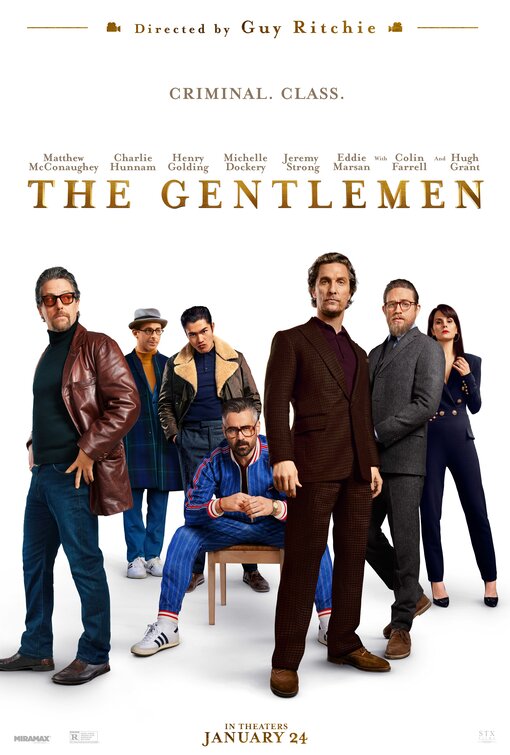 This is one of the most awkwardly arranged group shots
I've ever seen. It's like something out of the Royal family

I don’t know what Guy Ritchie’s deal is, and I’m pretty sure he’s not going to see things this way, but when you make a flick that seems like it’s all about getting revenge on those dastardly tabloid editors and jerk – crim reporters, it seems a bit personal.

And when one of the main characters you have in the film is Hugh Grant, playing the sleaziest version of the kinds of slimy paparazzi / private detectives / tabloid reporters that made his life a living hell for decades, again, you seem to be making a statement.

Statements are all well and good, but they don’t always make for entertaining cinema. This film here, The Gentlemen, goes out of its way to be entertaining. Perhaps almost even too entertaining. It flirts with breaking the fourth wall plenty of times, with Grant practically winking at us as he refers to camera lenses and anamorphic aspect ratios and fade outs and other narrative / stylistic techniques as he tells his barely believable tale to a captive audience.

There is even a scene involving Guy Ritchie playing a very Weinstein-esque looking exec at Miramax’s offices. You remember Miramax, don’t you? They made all these great movies, and ruined all these women’s lives?

If we’re all really honest, no Guy Ritchie flick has been as outright enjoyable as Lock, Stock and Two Smoking Barrels in all these years. Some of his other flicks have come pretty close (maybe Snatch, maybe RocknRolla, maybe the first Sherlock Holmes flick), some have been meh, and some are flat out dumb. His flicks are only getting more convoluted in their plots, with that frustrating proviso that any situation faced by a character can be gotten out of because of something else we didn’t see happen beforehand done by someone we didn’t know was around.

That might seem like an artless way to describe the complicated plotting on display here, but in some ways this kind of overwrought overwriting is really underwriting. It’s the equivalent of someone with little to say who tries to hide the fact by yelling the little they have to say very loudly and with different phrasing a lot of times, and occasionally backwards.

But the flick does have its strong points. Most of them come down to individual line readings, with some absolute doozies in the script, and strong comic performances all the way around. And this has a big-arsed cast full of a stack of people trying to distinguish themselves on a crowded stage.

The character that does the most work and gets the most screen time is the Cockney Accent. Never have you seen more people from posh backgrounds mangle the supposed accent of the English working class. I mean, Matthew McConaughey thankfully uses his usual Texan drawl, and Colin Farrell assays the thickest Irish brogue available, but everyone else, regardless of background, uses the highly affected version of Cockney and rhyming slang that Guy Ritchie has made ever so popular with the masses.

I mean, he even did a version of King Arthur where the Knights / Crims of the Round Table all sounded like 19th century Cockney bootblacks. Shine yer shoes for tuppence, guvnor? Best in all the East End!

He also, and I’m not crazy about this, has a lot of fun sexually harassing the main character. Who is the main character, you may ask. Looked at one way, it’s the McConaughey character of Mickey Pierce, who runs a cannabis empire somehow across Britain. Looked at another way, it’s Ray (Charlie Hunnam), Mickey’s second-in-command, who is the character who has to listen to all of Hugh Grant’s gibbering tosh. Looked at another way, since 90% of the flick is narrated for our benefit by Grant’s character of Fletcher the sleazy detective unravelling a very complicated story, it’s Fletcher?

See, when the film begins, Mickey goes into a pub in the morning, has a pint and a boiled egg (?), and then seemingly gets shot by someone for no good reason. That’s when it jumps to Hunnam’s character getting home, and finding Fletcher drinking his very pricey booze, wanting to have a chat.

Thus begins a tale of intrigue and intricacies that, ultimately, is less than the sum of its parts, but some of them parts are mighty fine. Fletcher begins explaining to Ray that he knows everything that was going on with the life and times of Mickey Pierce, which, presumably Ray would already know, but he becomes the audience surrogate that needs to have it all spelled out for him by Fletcher so that we can hear about it.

Essentially, Fletcher wants to extort $200 million out of Ray’s boss in order to not give up the story he’s developed and sourced to the guy that hired him, Big Dave (Eddie Marsan), the editor of some very shitty tabloid rag. Big Dave, who’s not really that big in any sense of the word, hates Mickey Pierce because he was rude to him once by not shaking his hand. I mean, men have been destroyed for less. Countries invaded, towns put to the sword, all for a handshake denied.

So Fletcher started investigating Mickey’s existence and machinations, and the current events transpiring in his life, to such an exhaustive degree, and with such security, that he feels comfortable coming forward now and asking for the big dollars, instead of the $150 grand he was going to get from Big Dave.

You could argue that the reason he has to explain everything in such detail to Ray, who presumably knows everything too, is that he has to put the fear of God and exposure by proving how much detailed evidence he possesses (in multiple, safe locations of course). So Guy Ritchie hides the sheer abundance of exposition by a lot of verbal and stylistic jazz hands on Hugh Grant’s part.

Let’s face it, women especially have enjoyed watching and listening to Hugh Grant swear ever since they first saw him in Four Weddings. I don’t think they’re going to find the swearing as charming here. There’s no artful “fuckadoodle dos” or foppish funny “fuckity fucks” sparely dropped with devastating aplomb. There’s just the repetition of what I’m going to refer to in a supremely cowardly manner as the “c” word used in dozens of combinations, all of them with zero charm and plenty of grunting hatred.

It’s unlikely to have been used as many times in a feature film, even in British flicks. Even in Scottish flicks. I don’t mind hearing it, in fact I’m quite partial to it, but it’s a bit of a conversation stopper.

And a lot of people in this film use it. A lot. Be warned. Don’t succumb to the mistake of watching a bunch of flicks and then settling on this with yer family during these plague times, in the hopes that “I’m sure it won’t be too bad”. This ain’t a family friendly film unless you’re in the Manson Family.

Sorry, that was pretty eye-roll worthy. Being called The Gentlemen, you’d think it’s mostly about a bunch of guys doing guy stuff, and you’d be right. There is at least one female character that gets to talk often, and swear a bit, and we’re meant to think “Oo er, is that a bit of a turn up for the books for Lady Mary Crawley from Downton Abbey, eh?” As would come as no surprise, playing Mickey’s wife, the character of Rosalind is played by Michelle Dockery with a slumming cockney accent second to none. She also gets to deliver my favourite line in the film, which is a non sequitur, but then many of my favourite lines in anything ever done tend to be non sequiturs. Her line is “There’s fuckery afoot!”, and I laughed for about two minutes after I heard how she delivered it.

As the wife to a crime lord, we’re meant to think that she’s his match in toughness and in ambition, a Lady Macbeth to his, uh, Macbeth, but her role here is not to goad her husband into regicide in order to become the king; it’s to encourage him by example to stop fucking around in order to stop others from thinking they can take him down. She also, for whatever reasons of character, operates a high end garage, so she’s not just sitting around waiting for his call.

She is shiny and sharp, like a good knife, but she doesn’t have oodles to do. She is mostly the object of Mickey’s affections, and thus a way of getting to him.

And there are many who want to get to him. In deciding that he wants out of the complicated business empire that he’s built through blood (other people’s) and brains (his own), and the highly unlikely relationship he’s built up with the aristocracy since his implausible years at Oxford, Mickey thinks he’s found a buyer, in the form of a fellow American Matthew Berger (Jeremy Strong), who’s is so camp that his character makes even less sense here than the work Jeremy Strong does in Succession, as one of the villain’s awful children.

So, to summarise something that seems unsummarisable: Mickey wants to sell his business, Matthew doesn’t want to buy the business for that much, other people get involved, Fletcher implausibly finds out about all sorts of things he could never have been privy to, lots of people get killed, the Triads get involved, Russian hitpeople get involved, and we’re left wondering in the end if the characters involved really could have been as clueless as they needed to be for any of this to work.

There’s also a strange, almost messianic figure of a guy called Coach (Colin Farrell) who mocks the violent scattered youth of Britain, but also, perversely, trains them in boxing, and “accidentally” turns some of them into supercriminals who also film themselves committing crimes and then editing it into rap video clips(?)

There are plenty more characters and interludes and speeches and travails, but you might start wondering whether Guy Ritchie and his screenwriters now just solve narrative issues or thematic concerns by just throwing 400 more characters at the problem and more minutes devoted to artful swearing that has nothing to do with propelling an inert plot ever forward.

Characters die because of happenstance and bad luck, others survive because of happenstance and dumb luck, and yet others get the upper hand because they knew something was up and took steps offscreen and days before in order to circumvent something that the target or the attacker couldn’t have known, meaning we couldn’t have known either. The pieces of the puzzle are not put out there for our solving or amusement: they are thrown at the screen from a different puzzle box, and it fits if we accept it, or it doesn’t and we can go fuck ourselves.

Accusing this kind of flick of being implausible is kinda unfair, because these capers are never based on plausibility; they’re based on what will sound or look cool, and will make Ritchie look like he still has any new ideas.

I enjoyed it well enough, but I don’t think it’s clever enough to warrant a second viewing. It’s not a return to form, it’s par for the course by now. It’s far from his worst but it’s not close enough to his best, if that’s even a thing we want anymore.

When it ended, I was kind of glad that some people copped it, and some people didn’t, but these days I could be saying that about anybody.