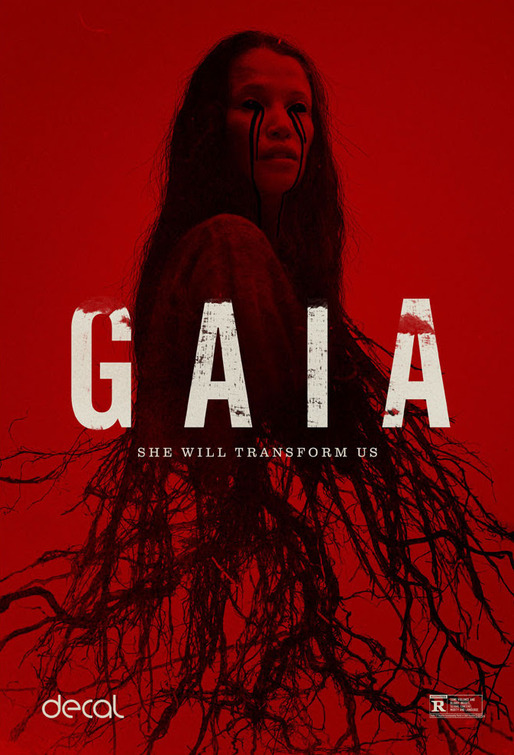 Gaia's back, and she wants that $20 you owe her

Last year I watched a documentary about fungi and mushrooms, and about something called the mycelial network, and about how extraordinary these organisms are, and how interlinked. Other than stunning visuals, it also implied mushrooms etc are the solution to pretty much all of life’s problems.

I think the people behind this flick also saw the same documentary, but they came away with a completely different impression and motivation: sure, the mycelial network is cool and all, but what if it hated humanity and technology, and could make people into weird mushroom / human hybrids?

Now that’s a quality premise. Two rangers, Gabi and Winston (Monique Rockman and Anthony Oseyemi) canoe deeper into a forest. Gabi has a drone she operates to buzz around and do stuff. Someone attacks the drone, and she determines that she has to go get it, which is the first and last mistake.

Clearly these people have never seen Apocalypse Now, because it’s underlined many times that the whole point is, whenever you’re in a jungle or forest, don’t ever get off the boat.

Because you will probably die, and probably also suffer a lot before hand. On her travels to retrieve her tech, Gabi steps on a trap and gets a stake staked through her foot.

This is painful, and a further lesson to not get off the boat. Winston, despite the fact that it’s night time now, also gets off the boat and searches for Gabi when he hears her scream.

He is doomed almost immediately, because there’s something in this forest, something not quite right.

There are two other people that we glimpse, very skinny, almost emaciated, covered in mud. Loincloths, too. They have bows and arrows, and they’re the ones who set the trap that hit Gabi.

When Gabi crawls to the shack these goons live in, you think at first – she’s in trouble, because she’s Goldilocks, and they’re clearly two of the bears. The third bear, being the mama bear, is missing, ironically enough.

She’s dead, but she’s still around.

In a turn up for the books, these two chaps are a father and son duo, Barend and Stefan (Carel Nel and Alex Van Dyk), the main difference between them being that Stefan’s been homeschooled, and Barend is fucking nuts and hates humanity.

They aren’t the real source of fear in the forest. People, other people who are infected with some kinds of fungus, blind but maybe doing the bidding of Nature itself or some natural intelligence, attak the cabin and try to kill everyone.

I never really understood why, but my understanding is unimportant in the face of GAIA. Barend has little time for humanity and its wicked ways, and seems like he’d stab Gabi at a moment’s notice if the plant / fungus / nature god he imagines, which is somehow kinda his dead wife and some massive mycelial network, told him to. But he doesn’t. He’s bonkers, but not completely and not always.

Gabi, who looks stunned for 75% of the movie, notices mosses, lichens, mushrooms and stuff starting to grow out of wounds on her legs and arms. That would be kind of worrying. We also saw Barend and Stefan doing something weird with some mushroom / fungus earlier on, which implies this long range infection is part of some divine plan, someone else’s divine plan. And as such there is a strong line of body horror throughout the flick, not only the notion of infection and losing one’s bodily integrity / autonomy or life, but being subsumed into some kind of shambling fungus hive mind.

Okay, that all sounds pretty silly, but on the most part I think the film succeeds where other similar flicks fail. There are still characters doing dumb things in order to allow the ‘plot’, such as it is, to chug along, but it feels less worthy of eye-rolling here than usual.

This flick is virtually the same flick that I saw a couple of months ago called In The Earth, despite the fact that this isn’t set in England, but in South Africa, but it similarly has some people just trying to survive, some people who think they’re doing the bidding of Nature but who are just nuts, and people who are doing the bidding of Nature because Nature is evil and hates people. Gabi and Stefan haven’t done anything wrong and, I guess, are innocent in the scheme of things, and Gabi keeps saying that she should save Stefan from a life in the forest and bring him to the city.

She never really makes the case as to why. Stefan has lived in a fucking forest all his life – take him to Johannesburg and he’ll be doomed within a couple of hours. It’s unspoken that a completely naïve survivalist would be better off in a city, any city, but it’s not clear why.

It’s also not clear whether the relationship they’re implying between Gabi and Stefan is a maternal one or something else. I say ‘something else’ because eww. There are some strange scenes of nudity and what could be referred to as ‘innocent curiousity’ which are anything but, however I don’t think the intent was to be gratuitous or sleazy. This flick doesn’t have an exploitative vibe to it.

It does have the low budget vibe of a bunch of people running around in a forest waiting to either die or be killed. I think the feeling I’m getting from these kinds of recent ‘green’ horror flicks is that nature has every right to be angry with humanity, and if it kills a bunch of us now, or if it infects a few people to kill a lot of people, it’s almost justifiable, or, in another way, it’s almost unavoidable. Could be this is the feeling I’m left with after watching daily news stories about the impact of anthropogenic climate change on so many ecosystems, but it’s hard to say.

Nature has long been our enemy in horror films, even in the ones where people’s hatred or selfishness is seen as being even worse than something Nature can throw at us, but here it has an impersonal quality. Barend may rant and rave about us being jumped-up apes with poisonous technology, but there’s no sense here that Nature, or these mushrooms, or a combination of his dead wife, mushrooms and something else, are doing what they’re doing in a malicious way. It’s just a biological process: grow, consume, spread, integrate, grow larger. It’s just that it uses infection and disease to get bigger.

I can’t say that I had a ‘good’ time watching this, but at the very least I don’t feel that it insulted my intelligence, like most movies of its type do. These people don’t have a heck of a lot of personality, and they don’t get to really do much other than react to circumstances, but that’s okay. I guess I watched this from a certain remove, not really ever scared or freaked out, but mostly curious as to where things were going to go.

As a horror flick it doesn’t really fit the bill of a jump scare thriller. It’s more of a moody “people go to a place they shouldn’t and things go wrong” flick, and I’m okay with that. I never really worried as to who was going to live or die, but I was curious if anyone was going to make it out of the jungle.

As to whether the performances are okay or not, I have little to no idea. People stand in the right spots and deliver their dialogue well, facing in the right directions and wearing clothes. Sometimes they speak English, sometimes the completely made up sounding language of Dutch Afrikaans, which I love, because they’re accent is so close to ours, but then isn’t, and that dissonance does my head in.

Gaia’s ending doesn’t so much imply a sequel, so much as it implies that we’re all doomed, because Gaia wants the planet back, and that’s okay, because I guess a horror flick can have a happy ending every now and then. What I couldn’t work out is where Stefan, Aryan poster child for homeschooling though he is, got the cash to eat at a diner before going out into the world?

These are mere quibbles in what amounts to an overall fairly fine foray into forest frenzies and fatalistic fungal flourishings for frightening fallible fools such as yours truly. It looked great, and the solid effects beat other stuff I’ve seen with 10 times the budget.

Gaia. Nature hates you, so watch your back on your next nature hike.

--
“Mother of Creation and Destruction. You are the earth and we are your children.” - Gaia