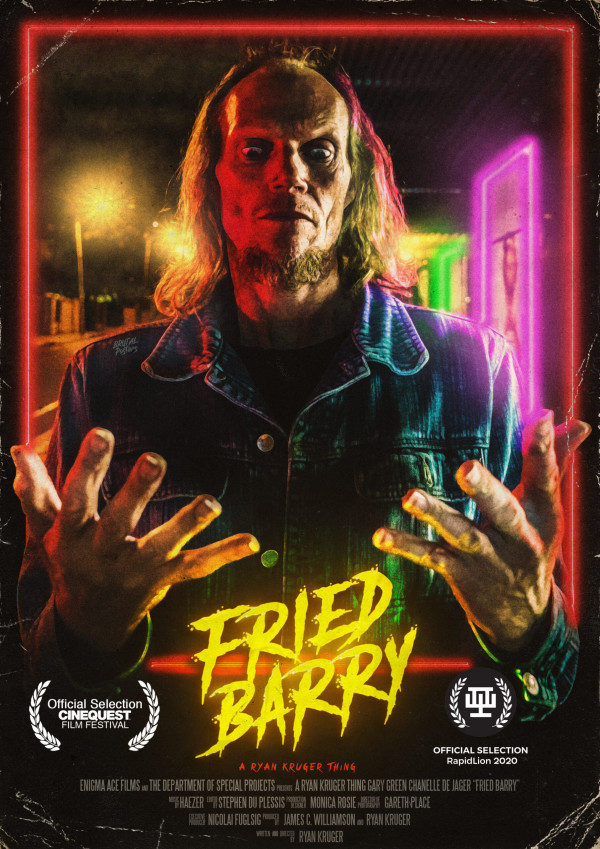 He's got the whole world, in his hands

I cannot recommend this enough, in that I cannot recommend this at all. It is an utterly bonkers endeavor in el cheapo gonzo filmmaking that is reminiscent of both Repo Man and countless video clips that I used to watch on Rage back in the day – no budget anarchic wonders that had energy and movement and little else.

It even has a weird intro where a serious looking government man is warning us that the content is going to be pretty racy and enjoyable in this ultra 18 Plus rated flick. He looks all official and serious, and like he’s just about to drop a defence of apartheid on us, but it looks so officially official. I think it’s a parody of warnings that used to be in front of flicks in the 1980s, but since I’m not from around there, these aren’t memories, they’re guesses.

Fried Barry is not only about a heroin addict called Barry (Gary Green) – it is about an addict who gets abducted by aliens, probed in all sorts of horrible ways, and then comes back to Cape Town even less well-adjusted and socially able than before. Whatever it is that comes back, it’s not really Barry – it just looks like Barry.

And what does Barry look like? Well. He looks like a demented, emaciated drug addict, with a bug-eyed stare, teeth that never have seen better days, a lot of acid wash denim. And now he mostly can’t even talk anymore.

People throw drugs at him now. Everyone wants to share their drugs with him. Women, always inexplicable in their choices in movies, all now must have sex with him. A woman drags him home from a club, projects hardcore pornography onto the walls of her apartment, has her way with him then promptly tells Alien Barry to fuck off.

Wherein another woman feels compelled to engage physically with him as well, but this time at least she can be assumed to be doing it for money. Joke’s on her, though, if this bonkers film has any message, it’s that you shouldn’t have unprotected sex, ever.

How bad an idea is it with Barry? Within seconds, the working girl pretending to writhe around in ecstasy is undergoing childbirth, and has a newborn Barry to remember him by?

Alien Barry’s journey is not really that much of a journey, in that he’s not really trying to get anywhere. He’s often standing in place as drugs are thrust at him, violence is perpetrated upon him, or everyone tries to have sex with him, but we don’t really get a sense that the alien at the controls has a mission or an intention, really, beyond seeing what life is like for a degenerate in Cape Town.

Turns out, at least from Barry’s perspective, it can be a lot of fun, if you survive it.

There’s no real morality tale, or cautionary tale, or wacky alien hijinks from teaching people to appreciate their human lives or anything like that. Beyond capturing whatever insane but cheap bullshit the filmmakers can think of, a lot of the flick has the feel of a show reel, as in, the director trying to showcase all the stuff he can do as a director for potential Hollywood work. There’s especially an insane and imagined action shoot out that only exists in the mind of one of the participants, but looks like a bunch of staff at a mental health facility being gunned down by a delusional lunatic (who isn’t called Barry), until someone asks him what the fuck he thinks he’s doing. Whether there’s chaos, or more method than madness was never the point.

And, as always, Barry keeps chugging along. Before he was taken over by an assumed otherworldly presence, we caught a mere glimpse of Barry’s grim home life. Despite being scum, Barry seems to have a partner (Chanelle De Jager) and child, and in the flick’s early stages all she has for Barry is anger and regret, screaming at him in an Afrikaner accent so thick I couldn’t understand her despite the fact she was speaking English. When she takes (human) Barry to task for neglecting their young son, he screams that their kid doesn’t even look like him.

O-kay, that’s the lament of many a deadbeat dad - scumbag the world over. It’s the universal language of negligent monsters everywhere. He does one better though – he then bellows that the kid doesn’t even look like her either, thus implying she isn’t the kid’s mother either.

When Suz stumbles across her shitty husband now possessed by aliens later on, the stream of Afrikaner invective continues, but now he’s learned somehow to be a more considerate lover, and he’s magically back in the good books, too. That, and he coincidentally parrots lines he’s recently heard, and luckily mutters something in his strangulated voice like “you’re the only one for me, Suz”, which somehow makes up for years of abuse and neglect.

You can’t keep Alien Barry in place for too long. He’s back on the street, in some cases literally, either having fits, writhing around on the ground, or having more drugs forced onto or into him.

He randomly comes across some guy having a heart attack, and somehow heals him. Later on he stumbles upon a guy that’s just been stabbed, begging for help, and Barry gives him the headphones he’s been listening too, walking briskly around the city like he really needs to keep his steps up to meet a target, and occasionally flying. He isn’t here to help people, except accidentally.

When he falls afoul of some thugs, he ends up in even worse hands, when a serial killer stumbles across him, and drags him back to his lair. There are a bunch of kids also imprisoned, so one can surmise that the person wanting to torment Barry is not doing it for science or some other noble pursuit.

With this flick having been made in South Africa your first assumption would be, if you were like me, that there’d have to be a political dimension to the flick, or at least some commentary on racism, considering how famous South Africa is for its unique blend of racism and human rights violations historically, but if there was anything akin to that here I couldn’t see it. Except for one minor character saying how he’s a little bit racist out of context and apropos of nothing (we already knew that: you’re of a certain age, and you’re a white South African), it is only a prelude to more drug use.

Drugs. The great equaliser. I can’t even really say what the flick’s stance is on drugs other than to say that they’re awesome? Barry’s life or adventures don’t seem to improve or degrade regardless of what drugs he has in his system, regardless of the fits or incapacity they sometimes bring.

I don’t know if I’ve adequately conveyed that though the tone and aesthetics are stark and seriously done, that this is, at least I think it is, meant to be a comedic and riotous affair. I think most scenes are played for humour, but sometimes it’s pretty hard to tell, because I could be missing a lot of cultural detail.

There are some hilarious scenes for which I cannot provide context or explanation. A lot of the humour seems dependent on the fact that Barry looks like an alien before he’s, you know, possessed by an alien, but also it’s from his alien behavior in contexts where it’s not appreciated by the regular people of Cape Town whatever their backgrounds.

But the scene where he stumbles into the toilets, and a man is receiving a, um, “gift” from a kneeling person, and the receiver asks the giver to hum the national anthem, but then says “no, not that one, the older one” struck me as being one of the funniest, most obscure yet relevant to South Africa jokes ever!

I laughed like a lunatic at that. I think this flick would do well with a crowd of people fucked up on booze and / or drugs, as god intended. Back in the day I can imagine this flick being played in the background of some of the clubs I used to go to, in that it wouldn’t be out of place with other cult so-called “classics” of the 80s. It seems calculated for nostalgia for people of a certain age, let’s call them Gen-Xs, for lack of a more pejorative term. It even has an ending straight out of ET, but with its own Fried Barry spin on things, played for maximum weirdness.

I had a lot of fun watching this film. Don’t get me wrong, I’m not pretending it’s a masterpiece. It’s clear there was no script, no screenplay. But whatever was cobbled together was done quite artfully, and I enjoyed it. I (sometimes) love trippy nonsense anarchy, especially when it’s not trying to be profound. But make no mistake, this is deliberately a pretty gross and brutish / brutal flick in parts.

But at least it entertained me.