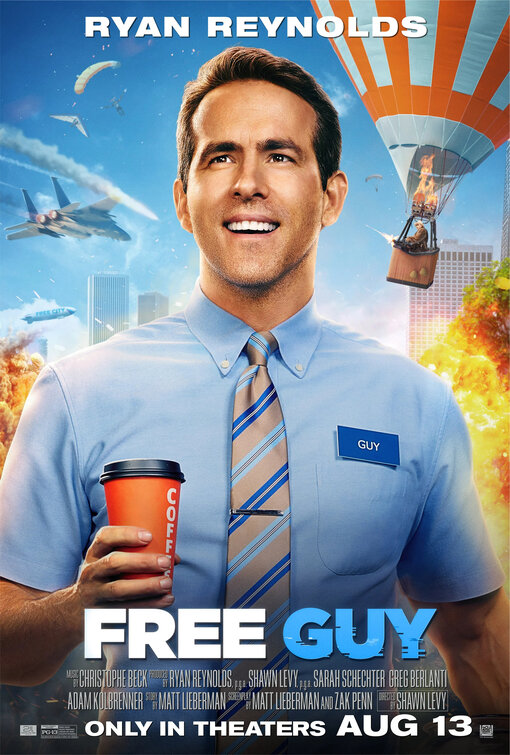 Oh look it's generic Guy in his generic Tie, looking so
generically Fly

Free Guy is the recent update to The Truman Show that you never knew you wanted and probably aren’t going to enjoy that much anyway. It does have the benefit of not having Jim Carrey in it.

On a different hand entirely, you may find Ryan Reynolds even more annoying that Carrey in his SMOKIN’ prime, in which case you are never going to watch this flick and why would you care anyway?

Yes, this is perennial fratboy Reynolds’ gig, in which he is in almost every scene and talks to us, the lucky audience, in voiceover, constantly. This is literally one of those movies where if the main character isn’t on screen, any other character is talking about him. He is the one who wakes up in the same place, dresses the same way, experiences the same day every day for our amusement

The city in which he lives, being Free City, is like something out of a computer game. Specifically, it’s a very violent but cartoonishly so game, in which there are two classes of people from Guy’s perspective. Oh yeah, the main guy played by Reynolds is called Guy, or Blue-Shirt Guy. How generic, you might think. Anyway, there are the regular shmoes like Guy, and then there are cool people who wear sunglasses and commit all the crimes and have what seems like agency and self-determination.

Guy wants to have self-determination and agency too. He has a best friend called Buddy (Lil Rel Howery), but Buddy doesn’t aspire to anything. Every time the bank in which he works is attacked by robbers, he drops his gun belt to the floor and lies on the ground, as does Guy, who is a teller in that bank.

I don’t know that it’s that much of a spoiler to mention that this is a game, and these “characters” are what are generally referred to as NPCs or Non-Player Characters, and that the people with sunglasses are avatars for actual people in the “real” world who play this game.

The thing is, though, at least at first, all the other NPCs stick to their stock scripts. They are very limited in their programming. They have no hopes or aspirations.

But not Guy. Like Wall-E in the Pixar flick of the same name, something magical has happened over time that has raised the humble program to something more complex. But like Emmett in The LEGO Movie, he’s the generically everyman Everyman who exists in a constructed world not of his making for the amusement or therapy of someone else within the movie. Media within media.

That is, if you can accept the concept of Ryan Reynolds as a generic everyman character, which I don’t think anyone can.

No shit, past a certain point, characters in the “real” world start referring to Guy as an AI, as in, a program so complex that “he’s” an artificial intelligence, and that he’s somehow achieved self-awareness. They keep banging on about this, again and again, despite the pretty obvious fact that how can Guy have self-awareness if “he” doesn’t realise he’s a character in a game?

In the way that Truman in that flick whose name escapes me doesn’t know that he’s real, but the world he’s in is “fake”, Guy doesn’t realise that he’s somehow just as constructed as the world around him is. When it’s explained to him, it’s meant to be a devastating moment, but come on! He’s as real as his world! It’s not like he’s a human in a holographic or virtual world; he’s a virtual being in a virtual world! That’s as real as it gets.

And what raised him up to the status of a thinking, feeling whatever with self-determination and willpower? Love, of course, the love of a good human woman. Not just a program, but an actual avatar based on a human woman, being Millie (Jodie Comer)!

In continuing to try to find this woman of his dreams, and achieve the love that he feels he’s always deserved, he speaks to Millie, who has a delightful British accent some of the time, but she thinks he’s just someone in the real world using the skin of an NPC to pretend to be a background character. By one of those miracles that only seems to happen in low stakes comedy action whatever the hell this movie is, Millie is the programmer who created the architecture of this world that was stolen by the evil Antwan (Taika Waititi, who really seems to enjoy playing an evil CEO person for once, oh, I guess except for that time he played Hitler).

She is searching for evidence in the virtual world that Antwon ripped her off, and you would think Antwan would have to be pretty dumb to keep the evidence in such a findable place. Taika does play this role with as much douchbro energy as he can muster, harassing his own staff, firing people randomly, the only thing he wasn’t doing was drinking Monster energy drinks or eating sushi off of junior naked staff. He is still nowhere near as bad as the most examples from companies like Ubisoft or Blizzard that have recently come to light.

The other jerk involved that matters is Keys (Joe Keery) who I guess we could call the creator of Guy. His unrequited love for Millie resulted in Guy becoming an AI and changing his entire virtual world in the pursuit of, I guess, a meaningful relationship for Keys and Millie?

Poor nerds. It’s not enough that they control the cinematic and social media worlds and space now, they have to have love as well.

None of this world is really believable, and by “this world”, I mean the world in which this story transpires, because it’s as unbelievable and unlikely here that the whole world would care about the actions of a character in a game. Families in China and across India and African nations aren’t going to be sitting around a TV about the adventures of a Blue Shirt Guy in some online game. If it wasn’t believable (and it wasn’t) that everyone in the whole world cared about Truman’s travails, they wouldn’t care about a character in any game.

But we are meant to think that, hey, this is the biggest game in the world, and everyone cares, from Twitch streamers and Youtubers up, what happens to our guy Guy.

What matters from our perspective is whether we care if something good or bad happens to Guy. You could further argue that you care what happens to Guy or not depending on whether you either like Ryan Reynolds or can tolerate Ryan Reynolds. If you hate his fucking guts you’re not going to be watching this flick anyway.

It's pretty silly but I guess I was in the right mood, because when I am in the right mood I can handle Reynolds’ energy, and also bright and mindless action adventures like this. The other movies Shawn Levy is best known for, being the Night at the Museum movies, which are empty but have a lot of movement and comedy and treacle and schmaltz and I guess it made me laugh eventually.

When Antwan wants to take Guy out, after everything else fails, he instructs his staff to drop in a more powerful character into the Free City world, and it’s meant to be like a bigger, meaner version of Guy. Naturally, the character is called Dude, and is Ryan Reynolds’ head superimposed on a massive bodybuilder’s torso. It’s funny, at least to me. The programming isn’t quite finished on him, so when he goes to scream his catchphrase, he bellows “Catchphrase!”

I did laugh at that. It’s amazing to me when things can be so massive and expensive and expansive, and still seem so half-arsed. There are some tiny little references to actual games, and some massive thunk thunk bonehead obvious crap that I’m not going to dignify by mentioning (they just made me groan with pain when they happen, all properties owned by Disney now), and ultimately, well, who fucking cares.

The one thing that caused me a sharp intake of breath was a scene intended to show how famous and ubiquitous Guy has become in the world, when his name is the answer in a Jeopardy question, and the late great Alex Trebek is still hosting! It’s one of the last things he did before dying! How fucking sad is that?

I would recommend it to no-one, not gamers, not people with kids, not even people who like Ryan Reynolds or any of the other flicks this shamefully rips off (that shamelessly ripped off other flicks as well). It amused me, but I am easily amused. It rarely made me laugh, and the tech talk is not convincing in the slightest (nor does it try to be) but I guess when I don’t think about it too much the tales of beings trying to transcend their destinies and their limitations are always appealing to those of us who think there’s got to be more to life than just the same stuff we see in front of us every day.

--
“Hey, I'm here with my best friend, trying to help him through a tough time. If that ain't real, I don't know what is.” – right in the feels - Free Guy