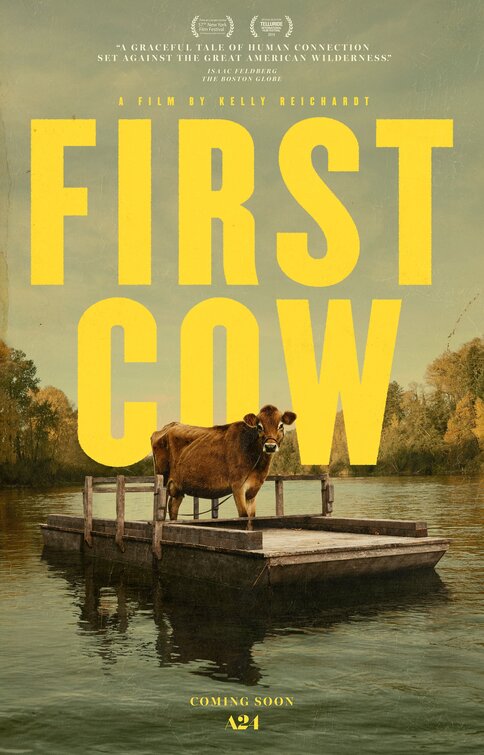 One Cow to rule them all, one Cow to find them, and
in the darkness bind them

This is a strange little movie, strange only in its choice of subject matter, not in the way it tells its story (though that’s plenty odd). It is a story about friendship, about two men in frontier times, Cookie Figowitz (john Magaro) and King-lu (Orion Lee), who are men out of place in a country they probably shouldn’t be in, but at least they have each other.

There is not much around in Oregon at this time, in terms of what settlers, formerly indentured servants and other chancers might hope for. There are many indigenous people around still, but this isn’t a flick explicitly about genocide and colonisation and such. There are trappers, hunters, people trying to set up forts and trading posts, and little else other than worthless nature.

Worthless to the titans of industry, that is. It is a cruel time, with little room for kindness.

Cookie is a kind man, though, however the world around him chooses to be, and when he chances upon a naked and desperate King-lu, his instinct is to help him, regardless of cost.

Of this act is born a curious friendship in the middle of nowhere. After some time passes, the men meet again, and literally shack up together, in a literal shack made of put together bits of wood that do not look like they would survive upright in a gentle breeze. Of note in town has been the auspicious arrival of a cow. It’s the only cow in the area – its calf and mate did not survive the journey from across the world.

One cow. The first cow of the title. What kind of man would bring a cow to a place where dairy cows haven’t existed before? An Englishman, of course, a coloniser, someone who sees an untrammelled wilderness and sees opportunity and profits ahead by trammelling it most brutally.

The Chief Factor (Toby Jones) is such a man. Like the Fat Controller from Thomas the Tank Engine, he doesn’t need a name, because he is what he does. He either factors chiefly or chiefly factors.

Why is he important to the story? It’s not just because the cow is his, though it is. I think it’s important because of a conversation we overhear him have with a ship’s captain, which is chilling in its import.

They are discussing the flogging the captain meted out as punishment to one of his crew, and they are weighing up the pros and cons of such brutality versus the amount of future labour one would still expect to wring out of such a tormented wretch, also weighed up against the value it has as a deterrent to the other members of the crew. The coldness with which they describe these calculations, when compared with the mentality of this manifest destiny / slavery is A-Okay with me era, is pretty sickening.

It's sickening that two chaps as gentle and resourceful as Cookie and King-lu have to live in these times and this place. They can dream of moving on, starting a business, making some decent scratch, at least. Also, they have the freedom to put it into practice. But the times, they are against them.

With Cookie’s cooking skills, and a little bit of milk from the only cow in the Pacific North West (I’m sure there were other cows around, but for the sake of the premise), they could have a viable business, making all the silver coins they can at a time where seemingly no other delicacies are available.

They make their crude buttermilk biscuits, or things that look like fried doughnuts, and the local hillbillies, scum and other wastrels line up to buy them in droves.

Their business is a success. This is the bright side of capitalism, one where everyone gets what they want, and no-one gets hurt, and there are no downsides to the production and sale of these goods and / or services.

Except for the pesky detail that they need stolen milk to make it work. Somehow none of these pissant peasants or even the lord with his top hat can figure out that none of these sought-after delicacies could be made without the precious milk from the one source available.

So impressed is the chief factor that he tells Cookie that he can taste London in the biscuits. I get what he means, but, having been to London, if you eat something sometime, and it tastes like London itself, seek medical help immediately. There’s a reason why The Pogues recorded the song “Dirty Old Town” about the place, and, to honour Stephen Sondheim’s passing this week as well, a good reason why he wrote “There’s No Place Like London” from Sweeney Todd, which, from what I remember, is more about the smell and the ruthlessness of the place than anything else.

But that’s by the by yet again – any excuse for a diversion. The chief factor may be a cruel man, but he is not a stupid man. You would think he’d have figured it out by now, and our two main characters wonder whether the other shoe would drop for him. Cookie wonders thusly: a man as arrogant, as haughty, as full of himself as the chief factor would probably think no-one would dare to steal from him. Of course he could imagine the possibility of it, but until he had direct evidence, he would dismiss it as unlikely because the peasants around him wouldn’t have the temerity.

He has, after all, the guns, the men and the wherewithal to do whatever the fuck he wants in these colonial times, and there’s precious little to stop him.

This leads to a funny, nervous scene where Cookie and King-lu are bringing over a dessert the chief factor has specifically ordered – a clafoutis, of which of course one of the main ingredients is milk, whereby the two entrepreneurs have to listen to the chief factor complaining about the fact that his cow produces so little milk, all the while wondering whether the cow herself is going to give the game away by being too friendly with Cookie.

Of course you could say things like “well why didn’t Cookie tell the chief factor that he’d need some milk from his cow in order to make the clafoutis, thus take the element of danger out of things?” Well, you’d be ignoring the fact that this flick is about two entrepreneurs who really aren’t that entrepreneurial or ruthless enough to really succeed and thrive and come to be titans of industry on the west coast of America. It’s about two guys who had an idea that worked for a while, and then…

The conclusion to their story isn’t really in doubt. The earliest scene set in the present shows a discovery by a woman walking her dog near a river. It takes the rest of the film to explain why she finds what she finds, as in, what happened to these two chaps oh so long ago? Despite that, it’s not a downbeat flick.

It’s hard for me to say exactly what kind of flick it actually is, then. It’s a fairly odd story. It’s also filmed in the 4:3 so-called Academy ratio, which perversely makes a flick mostly set in wilderness seem intimate and almost claustrophobic. The men’s friendship mostly consists of speaking quietly about various things, Cookie almost whispering most of the time. King-lu keeps coming up with grand ideas and plans, and then quietly dismantling them by pointing out why they’re not likely to work.

They’re both odd ducks, but in a good way, and I enjoyed spending time with them, even if I didn’t totally vibe with the rest of the set up. Maybe I was imagining it, but there definitely felt like nods or references to Dead Man, the Jim Jarmusch flick from a bunch of years ago that starred current villain Johnny Depp but also had an actor called Gary Farmer playing his guide as a character called Nobody. Gary Farmer also has a role here, as a tribal leader, and I was surprised to see him because I’d already thought about Dead Man a fair bit before he rocked up.

Stephen Malkmus from Pavement also has a small role, and I cannot help but think he’s playing the Iggy Pop role from Dead Man, but that’s a bit of a stretch, just because they’re both rockers.

I dunno. I enjoyed it but the flick feels too quiet and too ephemeral to really recommend, because I’m not sure there’s enough to get, but who knows. Maybe flicks about friendship in these hostile times are exactly what’s needed.

7 times I wonder if the sequel would be called Second Cow or The Last Cow, or Return of the First Cow: Got Any Loose Milk? out of 10

--
“History isn't here yet. It's coming, but we got here early this time. Maybe this time, we can be ready for it. We can take it on our own terms.” - First Cow