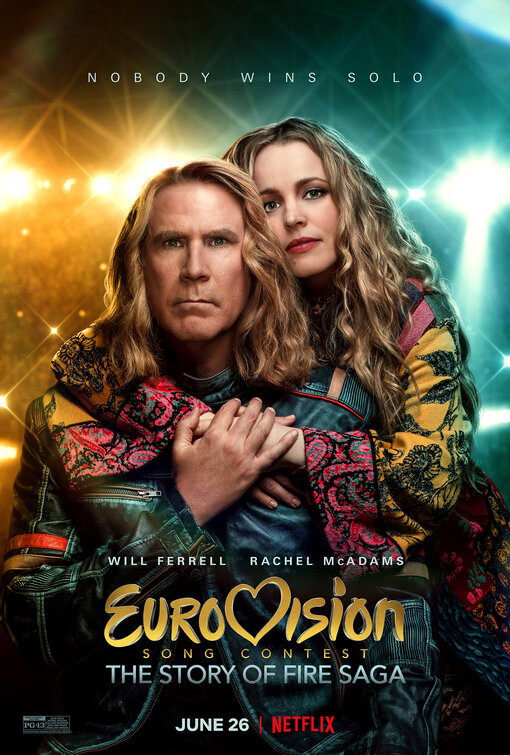 Her hair is still better than yours, Lars, live with it

Eurovision Song Contest – The Story of Fire Saga is not about either the song contest or about Fire Saga. We have been misinformed. Lied to. Fake news etc.

It’s really just about the singular talent that is Will Ferrell. He has made a career of playing a particular kind of man-child lunatic (as opposed to the very different man-child lunatics played by Adam Sandler or Zach Galifianakis or Seth Rogen or probably fifty other guys you can think of), which only achieves more poignancy / hilarity as he ages. There’s Peter Pan, an ageless sprite who never wants to grow up, and then there’s Will Ferrell, a very much aging sprite who never wants to not play a lunatic with a dream.

In this film his dream is winning the Eurovision Song Contest, to the exclusion of anything and everything else. Somehow, or somewhy, this story is set in Iceland, a small island nation that is famous for a lot of things that have nothing to do with Will Ferrell or the Eurovision Song Contest. As a child his character of Lars Erickssong is entranced by watching ABBA winning the contest with Waterloo, and, sad about his mother’s recent death, he vows to honour her and, um, himself by squandering his entire life in the pursuit of winning the contest.

Because, reasons. Over forty years later, he’s still trying, but at least he has a luxuriant wig and a great film clip for his song Volcano Man, which was so great, and so very much more like a clip by Empire of the Sun rather than an entrant in Eurovision, but then the rug is pulled out from beneath our feet when we see that the clip is only in Lars’ imagination, as he bangs away on a keyboard in his dad’s garage.

Well, Lars’s and Sigrit’s (Rachel McAdams), his loyal musical sidekick, imaginations. The long-suffering character is the latest in a long line of long-suffering characters that exemplary Canadian export Rachel McAdams assays here for our benefit. You know the role – waiting patiently for years for the guy to stop being a dick, only to decide just before they actually get together (towards the end of the film) that she’s had enough.

It’s never really ever made clear that Lars has much of any musical ability, which I guess goes along with the aesthetic and energy of most of the things he does. No character he’s ever played is celebrated for their competence. It’s more their enthusiasm that people enjoy.

Sigrit can sing, though, so somehow they’re in with a chance, remote as it should be.

While they do have enough shots of Iceland to prove that they were at least there at some point filming, I have to say, not like some uptight defender of all things Icelandic, but one who appreciates that it’s one of the most awe-inspiring and different places on this Earth, that they don’t really do much with Iceland. The main characters, and many of their supporting cast, don’t even bother with Icelandic accents. At most these Americans, Canadians and Irish people put on an accent that would make the Swedish chef character from The Muppets blush.

So despite the Icelandic backdrop, really it’s treated like a generic Scandinavian place with generic Scandinavian motifs. The strangest and in some ways funniest part of the proceedings is that the entire idea of someone from Iceland winning Eurovision is strenuously opposed by the Icelandic bigwigs because they think it would be too expensive during these economically straitened times.

The strangest element for me is that none of this flick could be seen to be a parody of Eurovision or even the gentlest of satires of it. It’s played completely “straight”, in the sense that it accepts the contest entirely on its merits, as a real thing, worthy or not, as it is.

I’m not going to mince words here; I realise it’s seen as a camp experience, fabulous all the same, but I happily hatewatch the fuck out of it. Good songs or okay performances are rare. Quite often you’re watching a strange model of either gender wearing terrible costumes warbling painfully in English with lyrics so generic and empty that they could be singing about a lack of potatoes or love or Russia’s invasion of the Crimea and you wouldn’t know it until way afterwards.

When the musical acts of various countries are bad, they’re really fucking bad, in a way that you know transcends cultural barriers and the vagaries of ethnicity. Awful cheese is the most international of languages, and bad music is universally appreciated / mocked by all.

Plus there’s the feeling with certain performances that even in a given year, you’re watching something in form or delivery so dated it’s like you’ve opened up a time capsule from another century. Also, there’s the strange rivalries between countries, the fact that Israel competes, the even stranger fact that Australia competes…There’s so much going on.

And none of that is present here. Other than the comedic manner in which Fire Saga gets to be in the final competition (all the other Icelandic acts are indisposed, for some reason), Eurovision is treated like a serious thing that happens, that’s universally loved and everyone everywhere in Europe supports it.

That’s practically a science fiction premise, so untethered from our own reality, where Eurovision songs aren’t even popular in their own countries let alone across borders. Though there are a bunch of acts, and a fair few past competitors / winners who appear, none of it is having the piss taken out of it. So when Conchita Wurst appears, or Netta or Jamala, during a song montage, it’s not to mock them for their appalling songs with which they won their particular year’s competitions – it’s to celebrate them, and to reward, I guess, the lugs in the audience who know who they are.

But…you could be asking yourself, what the hell is the point of celebrating this abject pool of cosmopolitan mediocrity? Well, I don’t know. For laughs? For shits and giggles? Really, it’s not a lot more complicated than Will Ferrell watched Eurovision several years ago, and thought it would be funny to play a person involved in Eurovision.

Dan Stevens, most famous for Downton Abbey, though he’s done a stack of things since then, has the most fun of anyone in this entire flick. He plays a hypersexual Russian Eurovision competitor whose song is literally called The Lion of Love, with a stage show and performance perfectly in keeping with a) Eurovision and b) Russia’s usual song entries for Eurovision. It is so deliberately appalling that it is absolutely wonderful. He somehow also has a mansion or something in Edinburgh where the contest is being held in this particular year, and the mansion is filled with anatomically – well, I won’t say “correct”, but I will say “anatomically prominent” statuary. He is a delight, and his Russian accent is very excellent.

He exists not so much as a villain, but as an impetus to encourage Sigrit that she can do better than Lars, which is a given and we all knew that already, but also that she is the true talent in the band, and she needs to let her passion out. Being the creepy Russian fuck that he is, it’s meant to be both creative AND sexual release that he’s implying.

But Sigrit knows he’s absolutely right, yet it takes the rest of the film for her to catch up to that fact. Lars as well is given temptation in the form of a Greek performer, Mita (Melissanthi Mahut), who tries to do the sex with him and lead him astray, and make Sigrit realise how much of her life she has wasted on this loser.

But Lars is too much of a 50-Year-Old Virgin, too fixated on winning Eurovision, to let a delectable Hellenic baklava lead him down the path of iniquity.

Ugh. So people will have to come to terms with stuff, realise stuff, and then transcend stuff, in order to accept certain aspects of their lives, before returning to the mundanity of their daily existences, just like it is for 99.9% of the people who compete in Eurovision, and go back to stacking shelves or making coffees whether they win or lose.

I can safely say that I enjoyed this flick and laughed a fair few times, just like watching the actual Eurovision contest. But I’m not going to pretend this is a strong flick that would appeal to people outside of its very narrow demographic, which is the crossover of people who a) thought Blades of Glory was funny and b) people who can sit through Eurovision sober. I kinda wished they’d delved deeper into what it means for people to get into this contest, or the effect it has on a human soul to have to indulge in such cheese-producing fakery, but this probably wasn’t the place for it.

Will Ferrell and Rachel McAdams have zero chemistry together and that’s okay. He’s so old, and she’s so vibrant, that it’s plenty okay that they’re referred to as almost siblings for most of the film. She has far more chemistry with the glorious Lion of Love, but then who wouldn’t with an obviously voracious pansexual deity like Dan Fucking Stevens? Dirtbag Dan? C’mon…

It helps, and it’s quite telling, that the most prominent and recognisable music they use in the flick is the sublime music of Sigur Ros, and I point it out for the two key reasons being that their Icelandic music is genuinely great, but would also never come within a million miles of getting selected as Iceland’s entry for such a contest. I think they mention Bjork once in the flick, which is another horrible oversight.

I very much enjoyed the brief performances of Natasia and Jaime Demetriou, two very funny British siblings, best known for Stath Lets Flats, and Natasia of course for playing Nadja in the tv series of What We Do in the Shadows. I love every second of seeing either of them on screen. It’s also nice to see Graham Norton, who could not like seeing and hearing Graham? You’d have to be dead inside not to love the charming Graham. He plays the same role here that I guess he plays on Brit tv when the Eurovision contest is on. He’s no Myf Warhurst, Julia Zemiro or Sam Pang, I’ll you that for free.

I laughed. I cried. I might even have sung along to “Ja Ja Ding Dong.” There is no penalty for such awful behavior, but there is much entertainment to be had.

7 times I lied about being sober while watching this Netflix Exclusive! out of 10

--
“Give up your dreams now while you're still young.” – sensible advice at any age – Eurovision Song Contest – The Story of Fire Saga