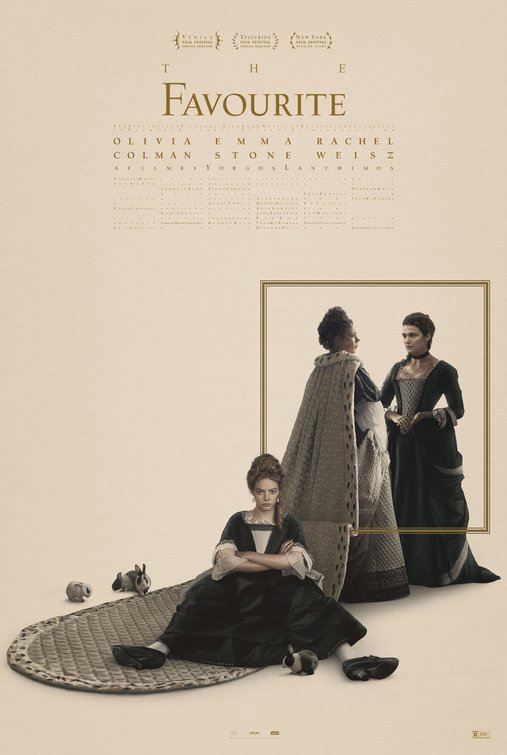 Come, family, let us bask in the warming glow of our betters,
giving us a myriad of life lessons

Unbelievable. Finally they’ve made a good remake of All About Eve. It’s about bloody time.

The Favourite is one of the most bizarre situations to ever rise to such prominence that it not only earns nominations but actual Academy Awards and such, but, controversially, I’m going to argue the awards went to the wrong persons. Also, that this flick by this lunatic of a director ever could have been nominated for Best Picture (and lose to a manipulative nothing like Green Book) is flat out surreal.

As wonderful as I find Olivia Colman generally and specifically in everything she’s ever done, probably especially Broadchurch and Peep Show, I actually am not sure why you’d give the award to her and not her two co-stars. I can’t see this film working without the strength of the other two performances, being those by Emma Stone and Rachel Weisz.

For this director, in quite a baffling way, this is probably the most conventional flick he’s made so far, the most “normal”. Working backwards, The Killing of a Sacred Deer reformulated ancient Greek tragedy as a bizarre family under threat drama, telling an awful story (‘tis a tragedy after all) with his signature oddness. Before that, known actors in The Lobster delivered the flattest and awkwardest performances of their careers in a movie where single people are transformed into animals if they don’t hook up after a year of singledom. Before that, there was the film about people who, for a fee, pretend to be your recently deceased loves ones to help you through the grieving process, awkwardly and flatly delivered (Alps). And before that (Dogtooth), it was a flick where two parents keep their three adult kids in captivity, spinning a tale about the world outside gone to rack and ruin, even though the world inside is pretty fucking awful and bonkers.

Not a conventional filmmaker. He’s pretty prominent, for a Greek director, but it’s a testament to how successful he is now that he no longer has to or wants to work with Greek actors in the Greek language. I mean, why would you, if you could avoid it?

Lord knows I’m sick of it. Just kidding. Now I’m no scholar of Greek film, but he’s clearly the most prominent director to come out of Greece since maybe Costa-Gavras, whose best work was admittedly decades ago. If that is, in itself, a good thing, then it’s an even better thing that he’s bringing up some other talented Greek actors like Ariane Labed (his wife), directors and film production people, especially Athina Rachel Tsangari (whose films Attenberg and Chevalier were pretty good).

All of that has nothing to do with this. The Favourite is a movie about Queen Anne (Oliva Colman), who reigned between 1702 and 1714. I don’t know anything about what she was actually like as a queen or as a person. The Favourite depicts her as a singularly ineffectual monarch and probably a complete nightmare of a person to hang around. She’s unwell physically, she seems fairly fearful of everything and everyone both inside and outside the palace, and she doesn’t really seem to be relishing the privileges that come with aristocracy.

Lucky for her there are a multitude of toadies, cronies, parasites and dependents happy to latch on to her. Of these the most powerful, the one who has her ear and pretty much everything else, is Lady Sarah Churchill, Duchess of Marlborough (Rachel Weisz), who is as certain and formidable as the queen is not. There is no doubt (as in, it’s in the historical record) that this amazing woman existed and, at some point, had immense influence on the queen. The Favourite goes a few steps further depicting outright that one of the many weapons at Lady Sarah’s disposal was keeping the queen happy in her bedchamber as only a woman can.

Entering this hothouse of luxury and excess is Abigail (Emma Stone), a fallen noble now getting by as a maid, a scullery maid at that, with her eyes on reclaiming what once was hers, as in, a life where her existence doesn’t depend on the whims of the nobility.

As a period piece, if that’s what we’re calling this, this flick certainly doesn’t aim for the theatrical and the romantic. Though the costumes are extravagant, the wigs bouffant and the décor ludicrously decadent, the intention in depicting the era is in emphasising the macabre grotesquery without making it a satire. It represents, without much effort, just how disgusting the aristocracy is on a personal and conceptual level, without having to show them murdering peasants or force-feeding them cake. The language used, both in public and private conversations, is pretty rough, surprisingly, and funny if the only films of this type one usually has seen have been covered in doilies and filigree and lace. Don't take grandma, is what I'm saying, unless grandma is cool.

The petulance of the monarch is offset by the clear-eyed machinations of the two ladies vying for her favour. Symbolically they could have been satisfied with implying that it was the battle of an older attendant wary of the ambition of a younger courtier, but they go and make it explicit by literally making it a battle between a current lover fearing replacement by a future one.

I was joking when I referred to this as a remake of All About Eve, which still remains one of the greatest and nastiest movies ever made about female rivalry in pursuit of the elusive monarch Fame, but there are definitely parallels, either with that earlier classic or maybe Showgirls.

It’s a wonderful story as old as cinema, but here it’s remarkably, surprisingly well put together. It delivers at least three great performances from the leads, who scheme, and plot, or fumble and collapse about in a fit of pique depending on what’s happening around them. There’s also a great performance from Nicholas Hoult as Lord Harley, a bewigged politician who isn’t above threatening to murder people or at least just push them into a ditch just for a laugh. He may sound like a bully, and almost any of the characters in this film could be a bit bonkers, but they are all very driven, very focussed people, and they all believe their motives are better than anyone else’s.

The reason I’m a bit surprised by how good the performances are here is that the performances in everything else Lanthimos has done have generally been, I dunno, a bit unnatural, or maybe flatly natural. His earlier works were typified by line deliveries so flat you wondered what the hell you were watching. That doesn’t apply here, because everyone delivers their lines with as much venom or relish as they desire. The gorgeous yet off-putting cinematography is very showy, very noticeable, in a way and with whip-pans that take advantage of all the long corridors and incredible interiors of these rich bastard landed gentry type places. The sheer scale of the opulence is always present, but you’re never allowed to get comfortable with it; you’re always reminded that none of it brings anyone any comfort for very long.

Are the relationships believable? I guess. If there’s any character we are meant to admire the most, it’s the competent and ruthless Lady Sarah, who despite her brutality towards the queen or her subjects, at least appears to have the interests of the empire at heart, and also the people. Abigail is in it solely for herself, but her drive is also keenly relatable. She’s suffered horribly at the hands of men and fate, and is determined to be subject to neither ongoing. Unfortunately, it means subjugating herself to the whims of a petulant and capricious queen, and even moreso to a powerful cousin disinclined to sharing power, until it’s her time to shine.

I guess some wags and wits would describe this maybe as a comedy of sorts, but it’s too dramatic for that. There might be a caustic note to almost every line of dialogue, but rarely does it prompt a chuckle, more of a sinking feeling inside. The broadest performance is probably the queen’s, which is why Colman got the award, I guess, in that there’s almost a panto quality to her moaning and gurning, but she’s also the showiest, and in some ways basest of the characters.

Is she a pathetic figure? I’d have to lean towards yes. Not to take anything away from the performance, but even with the pathos with which she earns our sympathies, in scenes depicting her loneliness or pain, they aren’t counter-balanced with scenes where she ever triumphs over adversity for the good of the realm etc etc. Her grief over the seventeen pregnancies and seventeen losses she experienced (if anyone was as baffled by the rabbit references at this year’s Oscars, well, now it makes a horrible kind of sense, as the rabbits she kept were meant to be living stand-ins for her lost children) somewhat serves to make her seem more childish rather than less. And, in something that’s almost unforgivable from my perspective, she is shown as being so pathetic at some points that Lady Sarah’s stern words or outright physical abuses of her are pretty much implied to be her own fucking fault, which, y’know, doesn’t sit well with me. Talk about royal victim-blaming, why don’t you.

As I said before, all three central performances are great, but Rachel Weisz for my money did a tremendous job with the most complex of the characters. Her character endures some awful circumstances, but you feel like her years at court or in the queen’s bed have not dulled her skills, her judgement at all. Though some might seem to win or lose at her expense, you get the feeling she could never be really written off.

Again, this doesn’t pretend to be historically accurate, and in truth, in trying to get some of the names right and such, I discovered that, if anything, the film doesn’t do Lady Sarah enough justice in terms of her achievements, her power earned, then lost, then earned again, nor in her redemption, which comes after the end of the story depicted here.

The Favourite plays out as a chuckle-worthy, disturbing and grotesquely compelling reminder that we should never put our faith in demented kings or queens, but in the actions of our own hands and the urges of our own hearts.

Also, maybe, just maybe, the aristocracy could just go away forever and it wouldn’t be an entirely bad thing, maybe?

--
“This mud stinks.”
- “They shit in the streets around here. Political commentary they call it.” – The Favourite