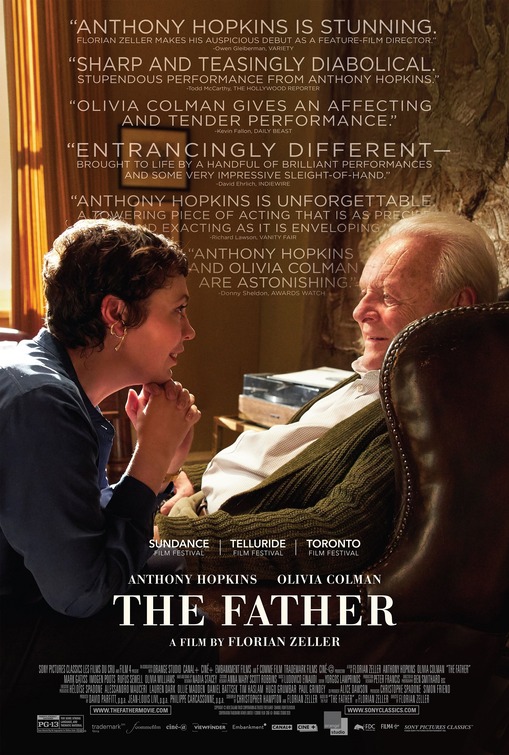 Love doesn't save any of us at these times, but it still must
mean something. Mustn't it?

Oh, what a heartbreaking film. The whole thing is… almost too much for my poor soul.

The Father, based on the play of the same name, written by the chap who directs here as well, is staged as a mystery. The main character of Anthony (Anthony Hopkins) is watching as things go on around him, as people come and go, with certainty about many facts about his life.

It’s not really a mystery, though. Not to us. We know pretty soon what’s going on and why. But he doesn’t. So as confusing issue pops up after confusing issue, we see more pieces of the puzzle, but he sees and remembers even less the further it goes on.

This is what he has certainty about: he lives in his own lovely, well-appointed flat. He has a daughter Anne (played by Olivia Colman some of the time, and Olivia Williams some other of the time), but there’s another daughter he keeps talking about, Laura or Lucy, who never seems to be around. She is his favourite, you see, and a very talented painter. Look here at her painting above the mantle, wait, where did it go?

Anne has a husband, or a boyfriend, or she’s soon moving to Paris to be with her new partner, or she’s already living with her husband (Rufus Sewell and Mark Gatiss), who doesn’t take too kindly to Anthony always being around. He’s either openly hostile, intending to steal Anthony’s flat and watch, or has already stolen it, or pretends to be supportive, waiting for a chance to lash out at the poor old man. He is also entirely supportive of Anne’s efforts in looking after her dad, or he is undermining her under the pretense of worrying about her well-being, and he’s either going to stay with her or he’s already left.

Stuff goes missing. A woman who had been hired previously to help look after the old man left because Anthony’s behavior scared her away, which has happened a number of times. But anyway, he doesn’t need anyone’s help, does he? He can look after himself. If only everything would stay in the right spot, and if strange people wouldn’t be popping up all the time, he would be all right.

But stuff, parts of the flat, parts of his life keep disappearing, reflected in the changes in the flat, which isn’t his flat anyway; it’s Anne’s. He’s been living with Anne for a while, and she’s been trying to introduce him to a new girl who’s going to help look after him, and she’s the spitting image of his other daughter Laura or Lucy, and she’s very nice, and he’s so charming to her, until he lashes out, thinking, wishing that he didn’t need any help and that things would stay in their right place.

He sees a watch on the wrist of one of Anne’s husbands, and he makes his discrete enquiries, like a detective, as to where he got the watch, how much he got it for, whether he’s still got a receipt for it. You know, all normal questions you ask someone when they have a watch you suspect they stole from you. But as Anne points out later (earlier), she’s sure that her dad’s watch is where he left it, that secret place he puts stuff, you know, under the bed, or is it in the back of the closet? Anyway, she’s sure the watch is where he left it – but where did he leave it?

The Father isn’t so sure. He has the unerring sense that something is being stolen from him, something is quietly being taken away from him, and though he blusters sometimes, makes stuff up to cover his lapses in memory, or tries to charm his way through, really there is this paranoia, that becomes fear, that becomes terror by the end.

It's a devastating portrayal of what a person with dementia could be going through. It’s not like the writer / director has experienced dementia himself, but he watched and supported his father as he went through it. His purpose here, as you could guess from the title, is to keep the focus on the father character, to portray events from his perspective, to not make it about the difficulties experienced by the people trying to look after the person with dementia, but to represent what it could be / must be like for the person going through this terrible reality.

Not to get too philosophical, because I’m not that much of a philosophical person, and I don’t smoke weed, but it brings up the obvious question: who is a person other than their memories of themselves? Once the memories become disconnected, once the parts of who one is or was are no longer accessible because of the dark disease calcifying the brain of the person it’s happening to, who is that person to themselves? The people around them remember and know them, and thankfully in Anthony’s case he has a daughter who loves him and who is trying to look after him. She remembers all the salient bits of his past, the truth, the chronology, where things are, including the watch, but that is only of temporary help to Anthony, at best. At worst, he is drowning in confusion, unmoored, unable to hold on to anything for any length of time, and completely lost not only in terms of a sense of self or place, but in time as well.

Scenes end at the beginning, run through again, and have endings that start at the beginning of a scene, but we don’t know that, like Anthony doesn’t, until after the scene has played out.

Obviously, different people are going to react in different ways to such a story. There have been other films about people’s descent into dementia, or the difficulties of aging, or of dealing with these debilitating diseases and conditions. They are all relevant, they are all emotionally devastating, and there will always be some kind of audience because this is such an unavoidable part of the human condition. If it hasn’t happened to someone close to us, it’s happened to someone among our friends and families. My dear friends had a father that lived with dementia for many years before succumbing, and there was nothing artistic or philosophical about what they went through, what their mum went through, what their dad must have endured.

This also doesn’t try to be a realistic depiction of the difficulties involved in looking after an aging parent with dementia. There are logistical aspects that come up, because Anthony can’t be left on his own, but it’s not about the physical requirements of looking after a person in this state, where they can’t remember what’s happening to them, and even the concept of putting on a jumper becomes confusing to them. What I talking about, in a very round about way, is this isn’t a flick that tries to horrify the audience with what it’s like looking after your parent, cleaning up after them or bathing them. That would be a flick about Anne, about the daughter, about the carer and her feelings. This is resolutely about what it must be like for Anthony, which is why it’s far more, in the end, empathetic towards him.

I have read very different takes on the movie, especially the work Sir Anthony Hopkins does here. Yes, we all know he was entitled to the Academy Award he won for this, but I’m not talking about whether it’s a great performance or not. I mean the character he portrays. Is he a sympathetic character? Well, I guess eventually. From the outset we are unsure as to whether he was a genial, happy-go-lucky type of old duck, or whether he was always a jerk, and the dementia just made him more of a jerk. That crack about Laura / Lucy being his favourite deliberately in earshot of Anne is particularly cruel, and you wonder whether he was always casually cruel towards Anne, or whether it’s him trying to get revenge for her wanting to hire a carer to look after him, which he finds humiliating.

Ha ha, joke’s on him, that other daughter is dead, and he just doesn’t remember it!

Oh, I feel awful cracking jokes about this film. It’s so beautifully made, so gentle in a lot of ways. It’s so sure of what it wants to get across about how it might be for Anthony, but that doesn’t make it any less determined to deliver the ending that it does, which is utterly devastating. The final section of this flick, when the veil is torn away, and the reality is revealed, or at least a point in time is held up for us to observe, that will soon fade for Anthony, and his reaction to it, is as devastating a thing as I’ve ever seen in a film. His acting in this last section is so raw that my heart breaks again just remembering it. Something about, after a number of questions about who so and so is, and who’s that guy over there, and, last of all, and who am I again?

I just want to curl up on the floor and sob, remembering it. The thing about stories like this in convenient, neatly wrapped up movies is that the ending is usually “okay, so they died, but the people who looked after him or her, they had a newfound respect for life, they totally wrapped up any emotional loose ends or resolved all outstanding traumas, and the parent’s death allows everyone else to move on with their lives.”

Dementia is a horrifying thing that a callous and malevolent Christian god inflicts onto His creations, proving how little He cares about them, but the worst aspect, or one of the worst aspects is that people can live a long, long time after the diagnosis. People can require looking after for years. After 75 diagnoses of Alzheimer’s or other forms of dementia can mean they need looking after well beyond the scope of what a movie allows. Hoping for death is a path no-one really wishes to start walking down, however convenient and cost-saving it might be.

So Anthony’s fate, like all out fates, is to suffer, and struggle, and to have moments where the current predicament makes sense, but a multitude more moments where confusion reigns supreme and sorrow predominates. And that is not a cheery thought to end on, but some experiences in life can’t be summarised on a poster, and some fights are never won, no matter how brave the fighters involved or those that love them. But, with no solution, with no recourse, with no salvation, with no hope left, all we can aspire to is that the person suffering is still cared for in some meaningful way, even if they can’t remember it, even if they can’t appreciate it.

The Father says so much by artfully and sensitively showing this person’s life, without having to say it explicitly and without having to underline anything. It makes all its devastating points so well, so beautifully without any easy answers or glib resolutions. It’s such a good film that I wish didn’t have to exist, and that it didn’t feel so true and so deeply felt.

--
“ I don't need any help from anyone. And I'm not going to leave my flat. All I want is for everyone to fuck off. Having said that... it's been a great pleasure. Au revoir. Toodle-oo.” - The Father