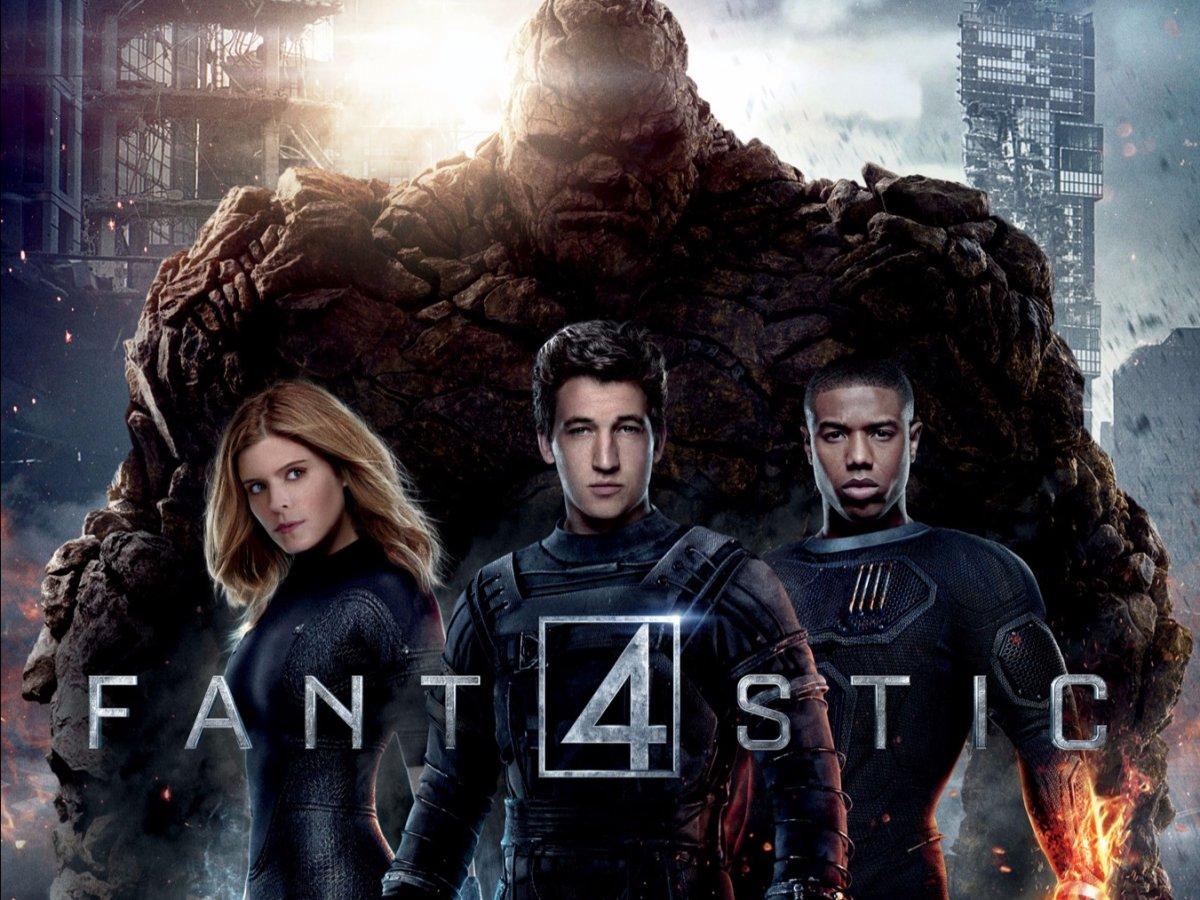 Bad buzz killed any chance this flick had of being successful, but even more than that, being a bad movie, and a badly made movie at that, certainly doomed this flick more than just having Dr Doom in it.

I just don’t think Fantastic Four can ever work as a big budget franchise type-dealy, like the execs hope and dream. They’re never going to get Avengers-like numbers, because it’s too hard a sell.

It’s weird, because at a certain stage, like, forty years ago, the Fantastic Four were the Big Enchilada, the Cohuna Grande, the kings (and queen) of the Silver Age, the top of the heap when it came to comic book teams. Sales-wise and pop cultural recognition-wise, they were huge. They were bigger than gonorrhoea, milkshakes, Vietnam and drag racing.

But tell the kids o’ today that, and they’ll act like you’re talking about the time when you caught the ferry to French Island with an onion on your belt, which was the style at the time, and tickets were tuppence ha’penny each.

Whatever, though. I don’t care about the comic book, because, honestly, after the last few years of superhero saturation, does any comic book matter as a comic book any more? Or the origins of whatever group of heroes? Do you care? Can anyone?

Only a fool would be emotionally invested in anything as cynical as the brand character properties and their motivations or anything coming out of the Marvel or DC houses any more. They’re franchises pure and simple, and the only real worth in watching them is whether they provide us with entertaining stories and action, and ways to kill a couple of hours. Their significance is purely financial, rarely substantial.

This film certainly doesn’t do that. It gives us a group of fairly uninteresting characters who don’t really do anything that interesting for 90 or so minutes. There’s no humour, nothing witty, no action to speak of, there are no cool visuals, the premise is terrible, the special effects look substandard and the design and aesthetic is dull and utterly non-compelling.

It’s really terrible. At least the version that came out ten years ago, with Ioan Gruffud and Jessica Alba et al had a sense of fun. It was goofy, and unconvincing, and maybe even a little crappy, but it had to be better than this. This looks ugly and has nothing, nothing at all going for it. I dare anyone to watch it a second time.

As for the second FF movie, well, that was an abomination that we never need to speak of again. This one isn’t as bad as that one, but that’s a distinction without a difference.

You have never seen this movie before, but you’ve seen this flick so many times before, and the only challenge is deciding who is most at fault. Josh Trank, the director, claims the movie was taken away from him by the execs at Fox, and that they took the heartfelt, amazing story he’d been trying to build, and turned it to shit.

The studio blames Trank entirely, saying it looked like he had some kind of mental breakdown during production, and a bunch of odd stories have come out about that time to make him look bad, and that clearly they took a gamble on him that didn’t pay off.

This may be true, or elements of if could be true, but it doesn’t seem entirely likely. Every movie has producers. They’re the ones getting the movie made. The producers are reporting back to the studio multiple times every goddamn day as well, especially on a ‘troubled’ production. A director is someone producers hire to make a movie FOR THEM. They are involved in coordinating every element of the production, being producers, naturally. They don’t walk away after getting it started intending to come back after a couple of months to see how you’re doing with the mounds of money they gave you.

The idea that Trank somehow made a whole movie and that they only just noticed when it was finished that it was a heap of shit is very unlikely, considering this isn’t some movie made on someone’s iPhone on a microbudget. This is a Marvel property, the film rights of which are retained, for god knows what reason, by 20th Century Fox, in the same way that while Spider-Man is a Marvel property, Sony retains its film rights, and keeps pumping out progressively shittier Spider-Man movies.

When they knew, who interfered with whom and when, we’re never going to know. Elements of this look shitty because of decisions one person made (like the look of Dr Doom, like many of the effects), but most of the script reeks like too many cooks all contributed personally to the broth. Blandification sets in stripping what few personal elements might have existed, rendering it very, very dull.

Still, it’s not as if Trank has that much experience making big budget crap.

Trank’s only other movie thus far was Chronicle, an original found footage flick about moody teens who get superpowers and basically become arseholes.

That was a good film. I liked that film a lot, a whole hell of a lot. Trank managed to say a lot of interesting things about a tired concept in a new and exciting way. I really liked that flick. It also managed to do something quite unique in getting us to care about a central character called Andrew (which should happen more often, I reckon), living in a fucked up situation, and yet we’re also assuming we're privy to the origins of a hero. By the time we realise how wrong we are, we see that the character Trank had the most sympathy for is also the one destined to become a villain.

No such sympathies abound here. These characters, these stupid characters, nothing they do here makes a lick of sense. Whether they were (only) badly written, or whether they were poorly directed as well, I’ll never know unless I talk to the actors themselves, which will never happen. What I suspect is that Trank basically wanted to tell the same story as he did in Chronicle, but didn’t have the experience to do so with a bigger budget or with established actors expected to be placeholders in a franchise.

These are talented actors. Miles Teller has been in a bunch of stuff in the last couple of years, for me most memorably in Whiplash as a drumming prodigy at the mercy of a J. Jonah Jameson dripping with malice. There’s no question he can act. I don’t know what he was doing here. He maybe carries the first twenty minutes or so, as a nerdy scientist who can think about nothing other than wanting to create some kind of teleporter. He has an acquaintance called Ben (Jaime Bell) who has nothing to do other than be abused by his older brother.

An older scientist not played by Morgan Freeman because they couldn’t afford him hires Reed Richards (Teller) straight outta high school, and then they spend an hour of our time constructing a thing that does a thing that takes people from this, our humble universe, to another dimension, another universe entirely.

They take so long to get there, so very long, that you could be convinced that once they get there, it will have been worth the wait, because something amazing will happen there.

The ‘they’ I’m referring to is a group of guys that don’t really have a reason to be together in any meaningful sense, who barely interact, and some of them are reluctant co-workers. When they get to this horrible other place, there’s this greenish-yellowish kind of magical liquid there that gives these jerks their powers or their mutated appearance.

And then some more boring shit happens, and then one of them decides to destroy the Earth because…

While elements of it are horribly familiar, because they’re commonly used enough to be thoroughly recognisable and thoroughly lame, they’re done so badly without enough of a support structure around them for their mediocrity to be forgivable. When many of the moments the maker(s) thought would be cool actually appear, like Dr Doom’s reveal, they instead come off as unintentionally hilarious, like you’ve just seen something put together by kids and you don’t know if they know how lame it is, or whether they intended it to look that way.

So much of what little plot there is doesn’t make a lick of sense, as if whole sections have been excised. My favourite is a bizarre, fairly non-descript section where Reed convinces a group of, I dunno - scientists? Government hacks? – to leave the room so he can reprogram some code in order to do the teleporty thing. He reassures them, no, it’s all cool, it’ll just take a few minutes, feel free to all leave the room because…

Huh? And the purpose of that was? Why would they even? Even better was the priceless ‘group of guys who hate each other get somehow drunk on a hip flask containing barely enough booze to get a goldfish drunk in order to bond’ which convinced no-one of anything. There are all these scenes like this throughout the movie, and I can’t tell if they were dropped in way, way later (in order to try to make some sections more comprehensible) or if they stand out because massive edits around those sequences now render them incomprehensible.

Whatever the reasoning, whatever’s left behind is terrible. The so-called ‘grim’ tone is at complete odds with this team and anything that could have been at all fun about this outing. It just makes it look like the worst bits of Man of Steel merged with an Indonesian knock-off of an Avengers film made by someone who hates action flicks and films in general.

I’m struggling to think about anything I came even close to liking about anything in the film or any of the characters. Maybe The Thing looked okay, maybe that’s about it. There are actors in this I’ve enjoyed in other stuff, but nothing they do here warrants including this on your resume. I’m sure they’ll all be okay, I’m not going to worry about them too much.

No. It’s terrible. Don’t even watch it as a joke, or if you’re in a masochistic mood, there’s no pleasure, no matter how perverse, to be derived from this disgrace.

3 times honestly, I could have done a better job, out of 10

--
“Victor, don’t do this!”
- “ There is no Victor, there is only DOOOOOOM!!!!” – don’t know if I got the amount of exclamation points right – Fantastic Four