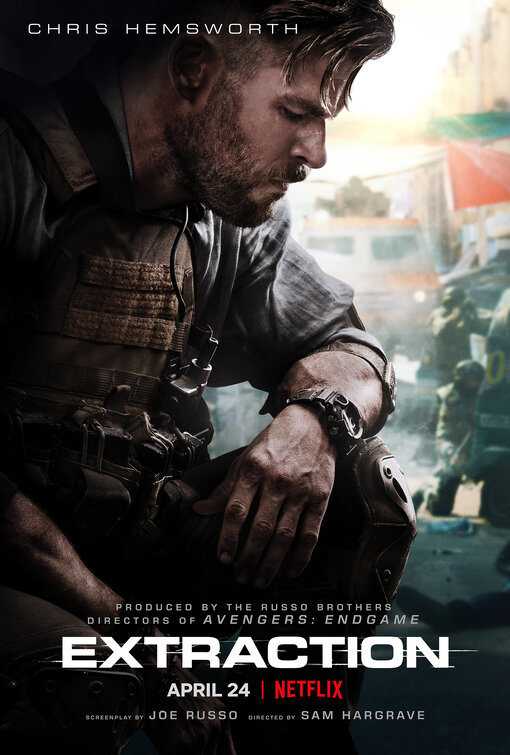 What gets blood out of shagpile carpets again?

Extraction. It’s like John Wick, except in Bangladesh, and with a Hemsworth, not a Keanu.

And it’s the good Hemsworth (not Larry), as in, one of the biggest current film stars in the world.

So it must have been the easiest of all sells for Netflix to greenlight this, especially now when the cinemas are closed and the Netflixes are open 24 hours a day.

Like all action movies, this is constructed from the most cliché components that have comprised "action movies" for at least the last 40 years. The lead character is suicidal and an alcoholic because of something that happened in their past (check). He’s willing to do any job that pays well, because he doesn’t care if he lives or dies (check). Though he seems like a complete psychopath, he’ll build a connection with someone (child or dog) that keeps him connected to humanity but also justifies killing thousands of people (check).

Arnie did it for 20 or so films. Keanu as John Wick killed more people in New York than the coronavirus over 3 films. And the Chrisest of Chrises, Chris Hemsworth, kills most of Bangladesh here, all justified, because a young Indian kid called Ovi reminds him of the son he lost to lymphoma several years ago.

Wait, does that constitute a spoiler in this day and age? Surely you jest. I cannot recall the last time I watched a violent action flick where the death of someone close to the protagonist, child or otherwise, wasn’t the pretext for going on a kill crazy rampage against some nebulous enemy.

Of course one could question some of the elements here, like what the optics are of a white guy going to a south Asian country and killing legions of people of that background, but one could also say that the legions are about as ethnically identifiable as stormtroopers are in Star Wars films. They wear body armour and face masks, and we never really get to know them – what motivates them, their hopes and dreams, a cute thing one of their kids did or said before they embarked on what would be their last mission. They are there as props, to be killed by our hero, nothing more. They are disposed of as unceremoniously as any condom that has served its purpose.

And there are just so many of them, and if we don’t care about all the people John Wick cares about, or cast racist aspersions on the production for all his victims, why should we do it here? Well, there is the little matter of the white savior bullshit, where an Australian has to save an Indian child from a terrible place like Dhaka in Bangladesh.

I have the feeling this was based on a book (it was) and it was originally set somewhere else (I don’t want to look it up, but in the credits it mentioned a book called Ciudad, so at a guess that’s set in Mexico or South America), so the reasons for it being set in Bangladesh are somewhat nebulous. It ultimately doesn’t matter. The main character here, with the delightful name of Tyler Rake, doesn’t care about the ethnicity of the people he’s killing, just like the tool of colonialism he truly is, he just wants them to die and leave him alone.

Rake, delightfully played here by an unsmiling Chris Hemsworth down for nothing but booze, oxy and killing, is ex-Australian SAS, turned mercenary. He is introduced sleeping, with a couple of indigenous mates, camping at The Kimberley, of all places for cool suicidal mercs to hang out.

They’re camped atop a cliff, where one of the guys guesses there’s a fifty foot drop to the water below. So we know right away that he’s damaged mentally but a superb specimen physically, of course he jumps off the cliff into the waters below. There he sits on the riverbed’s floor, wanting to die when he remembers the elusive something that he lost.

There is a team of fellow mercs led by Nik (Golshifteh Farahani), who are hired to save a drug dealer’s kid from a different drug dealer who has him kidnapped. So naturally they turn to Tyler, who can clearly kill people like an Australian cricketer downing tinnies of beer. Easily and frequently.

Ovi is a school age kid, about 15 I think, and he’s a harmless innocent, kidnapped out of spite by Amir, and also for ransom. His father’s right hand henchman Saju (Randeep Hooda) is ordered by his boss to get someone to return the kid, with the threat that Saju’s own kid will be forfeit if he doesn’t get Ovi back.

That’s powerful motivation. However, Saju doesn’t have the money he would need for that level of quality mercs. So, being an ex-special forces type himself, he hatches his own plan after the Australian’s team is hired.

The hard bit, you would think, would be getting the kid. Even though that requires killing a lot of goons, it turns out to be the easy part. Tyler and the kid are following a particular plan set up by the exceedingly efficient Nik, with a large team backing up, so everything should be over in, let’s say, twenty minutes, yeah?

But then somehow Amir controls a legion of goons, many of them children, and all the cops, and all the special operations cops, and the army. Even at his peak Pablo Escobar never had that much power, but I guess with the internet and online banking it’s possible to corrupt far more people far more effectively these days. Or maybe the implication is that Bangladesh is so hopelessly corrupt that something like this could so easily happen there.

So it means that Tyler has to kill about 20,000 people before he can go home. No biggie.

What ends up happening is this: Tyler tries to shepherd the kid to safety, and for the first non-stop hour of action, alternately kills a whole bunch of people trying to kill him and the kid, and fight Saju, who is also trying to kill him but wants to save the kid, and kills a lot of the cops / army guys; they both steal a bunch of cars or trucks and immediately crash them, get run over, fall out of or off of buildings multiple times, and barely pause for breath as the high octane energy goes non-stop for all that time.

When Our Hero and the boy end up in a sewer, you know, not just from the looks on their faces and their dry retching, but from all the insects and the kind of filth you can’t imagine a set designer wanting to set up for love or money, it looks like they dropped them into an actual sewer.

But I digress. At this point, which was, to the second, at the one hour mark, we pause, for a bit of a break. Tyler reaches out through Nik to a former fellow merc often mentioned but never previously shown called Gaspar.

Very little of any good comes from anyone called Gaspar. If you’ve ever seen the traumatising films of Gaspar Noe, you’d know never to trust this Gaspar either.

Nik keeps warning Tyler, but he doesn’t listen, because he doesn’t really have a choice, he feels.

If only he knew the character would be played by David Harbor.

Best probably known for Stranger Things, where he plays Sheriff Hopper, Harbor is becoming one of those actors who puts in progressively worse performances the older he gets and the more famous he becomes. Maybe going out with Lily Allen makes a man feel like he’s invulnerable to criticism any longer.

He’s horrible here, but it hardly matters. He is only in this brief respite before Tyler and Ovi are on the run again.

It’s also a chance for Tyler and Ovi to bond, and for Tyler to show some emotion, as he talks about losing his son to cancer, and how he was too much of a coward to even be there for his son. It’s an affecting scene. Almost too affecting, because from then on there is only going to be more killing until some people riddled with bullet holes inch towards the finish line.

It's like “Okay, we’ve emoted enough, let’s get back to the killing”.

A plan is contrived to get the kid across a specific bridge. Instead of, I dunno, walking across the shallow river beneath the bridge, no, they have to get across The Bridge so that Nik and the remaining team on the other side can extract the kid. Now they’re not doing it for money anymore. They’re doing it because Killing Kids or leaving behind a Kid that is going to be Killed is Wrong.

Mercs with hearts and presumably private parts of gold, these champs. It’s a continuation of the brutal breakneck speed action from the first hour, just with more explosions, and Hemsworth killing an even greater number of faceless people with more bullets in his body.

Of course Hemsworth can do this kind of stuff in his sleep, but he doesn’t sleep walk through the film. It’s a stuntman’s paradise, with a lot of CGI covering the edits to make scenes seem longer than they actually are, with some long set pieces that are pretty well done. The camerawork is thrilling without being frenetic, none of that rapid edit / jumpy camera bullshit, and as a full-on straight action flick, it’s a full-on straight action flick.

I have to say I loved watching Golshifteh Farahani, an Iranian actor of much skill who I remember most recently in Jim Jarmusch’s Paterson as the artist partner of the main character, step up here proving her action bona fides. Next time morons bleat on about who the next Bond should be, I nominate Golshifteh Farahani! She’d be even better than Idris Elba.

She’s pretty on point in the action scenes, and even gets the last laugh on the loathsome Amir and his henchman silver haired corrupt army colonel. She’s the brains of the film, Hemsworth is obviously the muscles, and Ovi is the heart: an innocent kid paying for his father’s mistakes.

Of course the film is too long, and this much action can’t be sustained for too long without becoming, I don’t know what the right word is: boring? Is that the word, or is it just impatience with the killings after the 10,000th, and wanting some kind of ending where not everyone dies?

It is strongly implied that Tyler bites the big one at the end, and then it is subtly implied that he doesn’t. I’m sure that someone desperately hopes this will become a franchise, because, honestly, that’s exactly what the world is crying out for. Crying out for more franchises where vast populations of people are shot in the face until there aren’t faces left or bullets left to shoot them with.

Extraction. It’s not thoughtful cinema, but it’s got plenty of balls, and plenty of people being shot in the balls. So if that’s your thing, this will be your thing.

7 times Nik should be the lead character in the next flick out of 10. And maybe they can shoot all the Eskimos next time!!!

--
“You drown not by falling into the river, but by staying submerged in it” – that’s one of them phrases that sounds like profound Eastern wisdom until you think about it for 5 seconds” – Extraction.