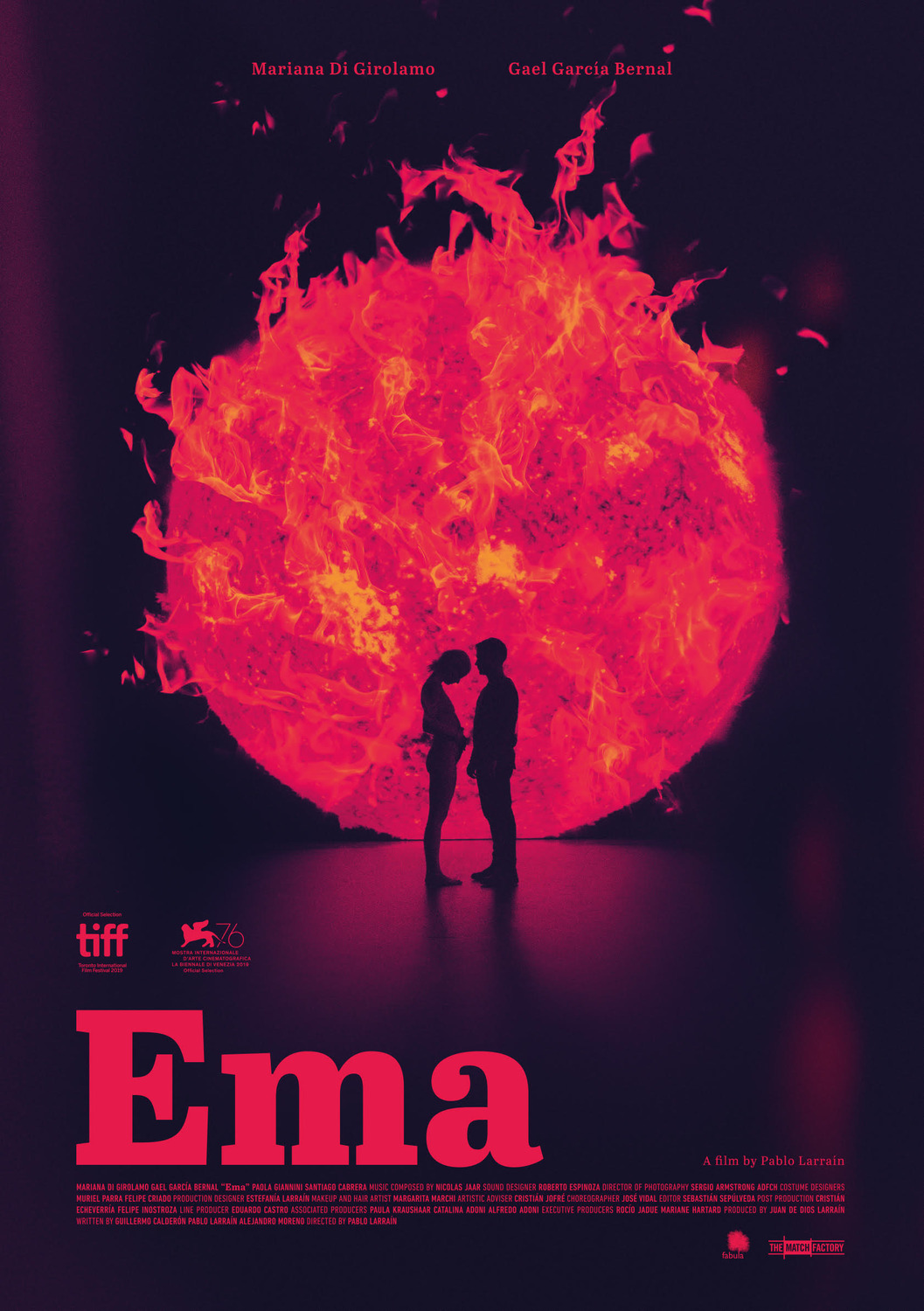 Just pray that none of her plans include you, even if you
die happy

Ema is the main character here, which is pretty obvious I guess since the film is called Ema. As played by Mariana Di Girolamo, Ema is a sociopath who is very determined to get her way in life. She seems, from beginning to end, to really want a certain outcome to occur, and also that she is capable of bending everything around her into a particular shape through sheer force of will.

And through the power of dance. And, um, probably sex.

Right at the start the flick is calculated to make the audience loathe Ema and her husband Gaston (Gael García Bernal: Mexico’s greatest export other than cocaine). See, there are often dramas about people trying to have kids, or adopt kids, or save kids etc. Few dramas start with a tremendously fucked up couple who’ve just GIVEN BACK a kid they had previously adopted.

The kid, Polo (Christían Suárez), doesn’t play much of a part in the actual film, but it is his absence that fuels all the terrible things Ema does over the course of the movie. Wait, that’s not accurate. Ema fuels all the terrible things she does during the course of the movie because she is Ema. There are a bunch of things with flamethrowers and fire hoses that she does as well that I’m pretty sure have nothing to do with Polo, but you never know.

Ema is married to Gaston, and they tear strips off of each other about giving the kid up, each blaming the other. Ema may be a sociopath, but giving the kid up seems upsetting to her. She might actually care about the kid, but the way she mostly treats people implies they are all pawns on a chessboard, and she’s a queen, so when something she once wanted and then briefly didn’t want is taken away from her, the infantile mind demands the toy be returned.

Gaston is a whole other level of awful, though. Lest this sound like a serious ‘real’ life kind of drama, about poor people, about the inhumanity and cruelty of the foster system, or anything along those serious social realist lines, this film is nothing akin to that. These aren’t child abusers or monsters in that sense, but they are quite terrible people anyway.

And for whatever it is that Ema is, psychologically speaking, Gaston is a horrible, narcissistic piece of shit himself. Despite being in the closet, somewhat, he married a much younger woman in order to, I don’t know, suck the life out of her, or at least her hopes and dreams. His bread and butter is as a choreographer and leader of a dance troupe, and Ema is one of the many dancers. We see the rehearsals for and production of one big performance that’s along the lines of performance art / Bangarra style productions, versus a lot of the street dancing Ema and her friends would prefer to be doing, in somewhat ‘younger’ styles like reggaeton that Gaston utterly loathes.

Gaston banks on the fact that social opprobrium will mostly be focused on Ema anyway. If a couple gives back an adopted kid, most of the people in their circle of family and friends, neighbours, society in general, will blame the mother, and pretty much let the shitty father slide. They expect fathers to be shitty, but mothers are held up to so much higher a standard.

People loathe Ema, and she loses a job teaching dance at a school over it, because the other teachers, or at least some of them, are too disgusted by her very existence now. It doesn’t seem to bother Ema that much. She cries once in the course of the film, and it’s early on. This isn’t a film about how she feels about what’s happened; this is about what she’ll do to return things to the way she wants.

Whenever it seems like she’s going to move on or do something different, Gaston pops up to remind her that for the rest of her life he’s going to keep reminding her and everyone around them about what she did. You would think this would be enough for Ema to murder him in his sleep, but for whatever reasons, she chooses not to despite clearly being very capable.

It’s all even more complicated than it seems. This couple should clearly never have been allowed to adopt Polo, being terrible people, but even that is articulated when the woman from social services who organised the adoption spells out all the ways in which this adoption should never have happened. Polo has a bunch of potential personality disorders, sexual precocity, fire-starting, torturing, even set a fire that disfigured Ema’s sister. The couple would have been disqualified from adopting on any number of levels because of their personalities and circumstances, he was older that most other orphaned kids, and he’s Colombian, which is somehow less worthy in Chilean eyes of adoption. But the organising the adoption somehow convinced herself she was doing the right thing(?)

Gaston turns their family and friends, and the dance troupe against her, but Ema doesn’t need them, doesn’t seem to really need anyone. Within the troupe is a core group of friends that she still parties with, who value Ema beyond anything she might have done, they dance together and, I dunno, have sex together when the mood takes them.

They’re also playing their part within Ema’s scheme to get Polo back. He’s been adopted to another family, and, through the magic of bribery again, Ema knows exactly who they are and where.

I guess I should have mentioned that the entirety of the flick occurs in one city: Valparaiso, in Chile. Though it looks like an industrial port city, it looks amazing. If travel ever becomes a possibility again, I would love to go to Chile, and wander through this amazing looking town, have some meals in its restaurants and some drinks in its cool looking bars.

I don’t know that I would want to hang out with any of these dancers, though. They look like they could break a man, or a woman, for that matter. They certainly have a feral energy, whether it’s for having group sex with some terrified / delighted woman, or setting some pretty big fires.

I know that somehow, somewhat, there’s a thematic link to why Ema starts wandering around setting fires with a flamethrower. Part of it, you’d argue, is to do with the scheme to get troubled Polo back. Polo’s ‘new’ adoptive dad is a fireman, and when you’re trying to find a fireman (in general), I guess you’d either go to a fire station, or find out where a particular person lives.

Setting fire to a friend’s car, while it shows a wonderful sense of loyalty, or shared pyromania, doesn’t seem like the recipe for the milkshake to bring a specific fireman to your yard. Still, it works, so you can’t argue with results.

Ema seduces the father, Anibal (Santiago Cabrera), without him knowing her connection to Polo, but, because Ema is nothing if not comprehensive in her scheming, she seduces the mother, Raquel (Paola Giannini) as well. In the midst of these manipulative seductions, Ema is seducing people left right and centre, whether it’s got something to do with her plot, whether it’s just a particular time of the day, and this is depicted less as, I dunno, acting out grief or guilt, or being emotionally distraught – it’s just seen as a vibrant energy thing.

She even seduces (not sexually) a principal at a school, a straitlaced, conservative woman who only hearing about some details of Ema’s dancing and her approach to life and teaching, and it’s enough to have her salivating with desire over a life not lived.

Ema’s not even doing anything to evoke this, her mere presence is doing it.

It’s not that complex – though there are a few different ways to read it. The vibrancy, the joyful fucking energy that Ema and her friends bring to life, or feel and express, which Gaston her manipulative husband fears and tries to tamp down, is either of ‘youth’ or of the younger generation in Chile, in South America, doing their rebellious stuff in a previously conservative and right wing fascist dictatorship, where pursuit of wealth is pointless but pursuing a) whatever they fuck they want or b) fucking just to keep the energy up, is the end in itself.

I don’t completely buy that kind of argument or approach, but I can see how someone can make that argument. I watched a brief Q&A with the star of the film Mariana Di Girolamo, where she brings up a lot of these points, of this exuberance captured in the reggaeton scenes and the sex scenes, and the linking through specific dialogue of these energies, but it also sounds like something the marketing department puts together and sends to actors to talk about in press releases and interviews.

I don’t really get the political dimension, but maybe there’s something to what Ema does, which is forcing a whole bunch of people, many of whom by the end of the film have done exactly what she wants, but have this stunned look on their faces like they can’t believe what just happened, into new family configurations and new structures, all because one woman willed it into existence. Mariana specifically says the young generations are reconfiguring society to suit them, and that might result in better, fairer relationships, who knows.

I guess I’m a bit old to be too optimistic about such thinking. This director is only a couple of years younger than me in age, though way ahead of me in talent, but I get leery every time I see flicks where someone my age tries to convince other people that they’re really trying to tap into the energies of youth culture for their benefit, and not their own. I can just hear the platitudes being grunted out of the side of their mouths as they yell at their actors during sex scenes while they themselves are jerking off in the corner.

I’m sure legendary creep directors like Bertolucci, James Toback and Lars Von Triers were always yelling at the other actors and the press about how they were empowering women just as they were treating them most appallingly, so I hope that wasn’t the case here. The sex scenes aren’t explicit, but there are a lot of them, and in almost all of them, I guess you can make the argument that they’re sex positive, because also, most of them are scenes where women pretend to have sex with women, and it’s solely about having enjoyable sex, and not domination or power dynamics.

Though, ultimately, it’s Ema exerting power over everyone, with the more than implied threat that if she doesn’t get her way she will burn Valparaiso to the ground.

And even at the end, even after getting everything she wants, the almost last scene is of her getting a jerry can filled with petrol, for who knows what reason, but I’m already a bit scared.

It is an incredible, powerhouse performance by Mariana Di Girolamo. She’s a monster, she is utterly selfish, she’s an honest liar, and she’s terrifying because she’s unstoppable. And everyone wants her or wants to be her. It’s…just…almost too much. Even with that hairstyle that almost every character in the film hates too, and that acid wash denim jacket that she wears, she cannot be denied.

It’s a stunning flick. I don’t know if I could watch again without spontaneously combusting, but you never know.

8 times Ema will either eventually rule the world, burn it to cinders or both out of 10