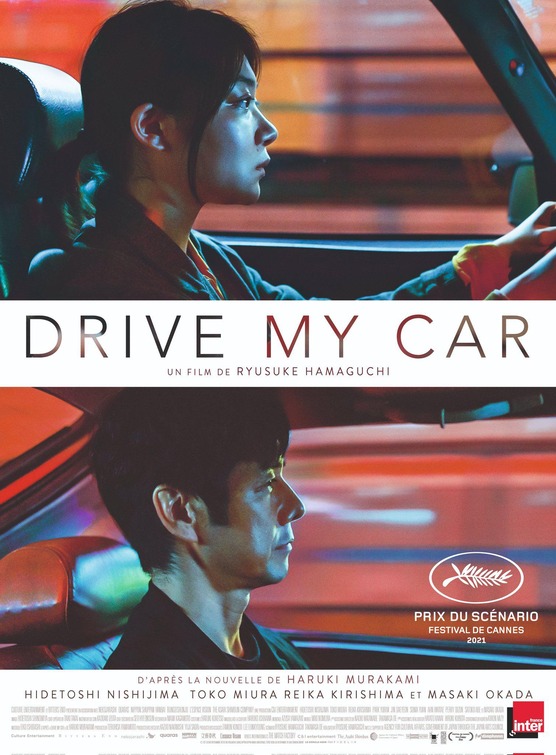 I know, I know, it looks like a laugh a minute

This film is a lot. There’s 3 hours of it. It’s mostly people talking. If you’re into that, well, this will be a treasure for you.

If not, the lack of explosions and action could be perplexing. Also, it probably helps if you’re a fan of Japanese dramas in general and the writing of Haruki Murakami specifically.

Taken from his short story collection Men Without Women, Drive My Car also uses elements from some of the other stories in the book, so it’s not a straight retelling of that story.

Yusuke Kafuku (Hidetoshi Nishijima) is an actor and theatre director. A lot of people not including his wife think that he is the bee’s knees, or whatever the Japanese equivalent is thereof. His wife Oto (Reika Kirishima) is a tv screenwriter, and she has this habit of spinning stories either during or after sex. Though they seem loving, there is a cold sadness somehow sitting between them.

When Yusuke tries to catch a plane but is delayed, and arrives home unexpectedly, he finds that he’s not the only one that enjoys Oto’s bedbound storytelling talents.

He does not confront her, or let on at all. But soon tragedy strikes, and Oto passes away.

At exactly 40 minutes into the film, the opening credits roll. I thought it was, kind of, a joke, but the more I thought about it, it was just a long prelude explaining who these people were, what they had, all before the “story” proper begins.

Two years later Kafuku is driving this red Saab we have already seen a lot of, to the city of Hiroshima. It’s… well, it’s not as simple as just picking a random Japanese city and situating the majority of the story there. This is a story about devastating grief, tremendous guilt, so why wouldn’t you want to set most of the film in a city devastated by an atom bomb dropped by American forces to end World War II in the Pacific?

Though the city seems nicely rebuilt since then, there’s at least one set of scenes referring to some of the city design / architectural choices made by the government in the rebuild, to do with peace and such. It’s pointed, but it’s not over the top in its delivery.

The local theatre has chosen to stage Kafuku’s production of the Chekov play Uncle Vanya, which, I guess, seems weird, but the way they conduct auditions, rehearsals and the production itself is pretty unique, at least from my limited perspective. Earlier on we saw a production of Becket’s Waiting for Godot, and instead of a) staging it in English, b) staging it in Japanese – it seemed like Vladimir was speaking in Japanese, and Estragon was talking in Russian. About the set was a large screen with subtitles in multiple languages explaining the dialogue to what I imagine was the baffled audience.

I guess that in and of itself isn’t that unusual. I’ve been at the opera and watched a performance in Italian or French where the dialogue is translated into multiple languages above or below. The different twist Kafuku is putting on things is that sure, they’re using the base text of Uncle Vanya, but the performers can be pretty much from anywhere in Asia, so he ends up with actors who will be playing their parts in their own languages – one character is Taiwanese, and delivers their role in Mandarin, another is Korean and will deliver theirs in Korean, another is Korean but deaf, so they deliver their part in Korean sign language, others are Japanese, and so on.

It sounds bafflingly difficult, like an unnecessary and perhaps pretentious added level of complexity which doesn’t aid the audience’s understanding or improve anything for anyone. If Kafuku has a point, it’s that the quality of the writing, and good performers moved by the text, can tap into this intensity and deliver performances that can move any audience.

The film is not about the play, but the play plays a great role within the story unfolding.

The people who run the theatre, I’m guessing on behalf of the local government, have strict rules about the artistic types they engage or hire for these kinds of productions. They insist that the director not drive their own car for the duration. They pay for a driver to drive him around everywhere. This is the film’s way of getting around the part of the original short story, being that in the text the guy’s an alcoholic who’s lost his driver’s licence.

Here, it’s at someone else’s insistence that he be driven everywhere by Misaki (Toko Miura), a polite but very distant young woman.

This is not a romance (thankfully). Kafuku is in his late forties, maybe older, and Misaki is like 23. More importantly, the significance of what they will eventually represent to each other is far more deeply felt that some kind of romantic entanglement or people healing through the loss of others by having sex with someone new.

Because the film is so incredibly long, it has a lot of time to fill in the details of many of these people’s lives. Of course most of the expansion, the embiggening of the characters applies to Kafuku and Misaki, who meagerly parcels out details of her life until it seems crushing. But she takes her time, the film takes its time.

It also makes the other people look like real people, with real lives behind them, as well. The Korean chap who works at the theatre, the deaf Korean woman, the young Japanese actor (Masaki Okada) Kafuku bafflingly chooses to play Uncle Vanya; they all have a lot going on, and not all of it is good.

We have, especially with all the time he spends in his lovingly preserved car, all the time to learn about people, and their pasts, but this is a Japanese film. Only an ignoramus would pretend that there’s only one kind of Japanese narrative or storytelling. There are films that conform to our idea of what Japanese film would be like in comparison to life in Japan, and then there’s all the other stuff that has people screaming at each other all the time and giant frog monsters eating cities.

The majority of the characters relate to each other in the polite, tense way we think of as being appropriate in a polite, honour-based society where conformity is prized above individual expression, but none of that is an impediment to indicating that while people on the surface say they’re fine, inside they could be boiling like a cauldron.

But that’s as true in their culture as it is in any other. It’s not as if people in Australia or South Africa don’t say “Fine. Everything’s fine” through gritted teeth, implying the absolute opposite.

When Kafuku praises Misaki’s driving, she explains that the reason she became such a good driver is because her mother used to beat her whenever she didn’t drive smoothly. In a different movie, it would almost be dark comedy, or misery piled on misery in a manner calculated to get us rolling our eyes at how much misery can be piled upon one person. Where her story leads, with her complex relationship with her mother, is not one anyone could really predict.

It’s heartbreaking, but nuanced as well, in a terrible, ambivalent way, where the only source of gentleness in her life came after violence. And where it lead her to, is where such a story had to go, I guess, for both of the characters who are carrying an insurmountable and inexpiable level of guilt.

Maybe they can, at some point, absolve each other, because they can’t absolve themselves?

Kafuku’s journey is perhaps an even more baffling one, seeing as he’s still trying to reconcile himself to losing his wife, but more importantly with what their life together meant. He reveals details of their relationship, of his resentments, of his fear that even if he convinces himself that she loved him, maybe that love was an illusion because her actions imply the opposite, even as he surmises the (tragic) reasons behind it.

And when you lose someone, well, you lose the ability to ask them for clarity, for closure. Other people, though, can bring us closer to some understanding, and even other artworks, I guess is the point.

Interwoven throughout are elements from the text of Uncle Vanya, which itself is a complex and vivid bit of storytelling. At one stage Kafuku balks at playing in it himself, because he doesn’t have the emotional resources, but at a later stage, he balks again (also during rehearsals, also during performances), and is given an ultimatum. It would be a cheap shot to say it mirrors elements from the play, but hey, they’re there, and some of the characters in the film insist on acting like characters from the play, so what are you going to do?

Live, is the final argument, both in the play and the film. We survivors carry on, and the rest is for God to hear about when we finally pass on. Until then, we do what we can, it’s all that can be asked of us.

I feel like I got a lot out of it. I watched it in one sitting, despite the massive running time, and I think I watched it at just the right time of the evening. I can see how it would test the patience of most mere mortals, and, honestly, even from everything I’ve described, some more stuff happens (but not that much), and it’s mostly a guy in a car driving around or being driven around, chatting about stuff.

The film’s coda, which I won’t spoil, clearly indicates it was filmed during covid times, but offers hope that the red Saab will continue being driven by someone who appreciates it, long after other cars have fallen by the wayside or been replaced by more environmentally friendly vehicles.

Fuck that: it even has a cassette player!

8 times I miss Japan, even though I’ve never been out of 10