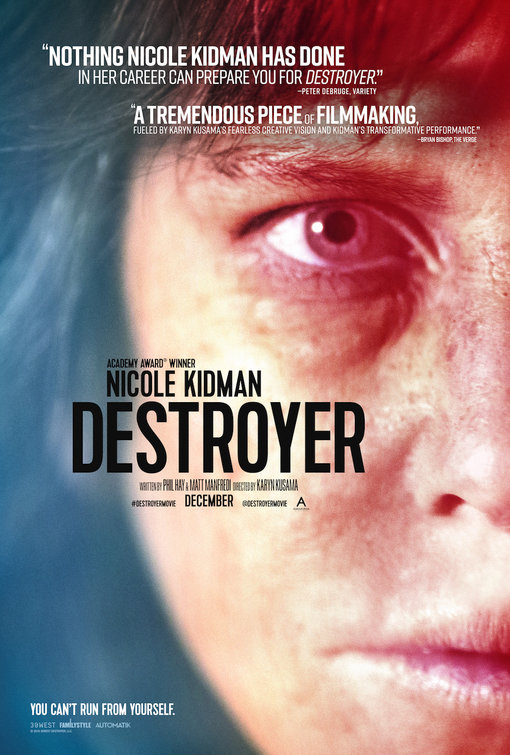 Destroyer, or How I Learned to Love the Passage of Time

This is a pretty grim story, in case you couldn’t tell from the heavily made up images of Nicole Kidman’s ravaged face.

The intention in this, I’m sorry to be so cynical, could have been Oscar-bait. Someone must have convinced Nicole that accepting a piddling amount of money to star in this would be compensated by the inevitable awards that would flow. It worked for Charlize Theron in Monster, so surely it would work again?

It’s not like Nicole doesn’t have awards, including the golden smooth shiny ones of the Academy. I don’t even have to look it up to remember that she won an Oscar for playing Virginia Woolf in The Hours, where the very unkind joked that the prosthetic nose she wore deserved the award for doing all the work. She was fine. It was one of a few occasions where people were surprised that she could subsume herself into a role and not just be Nicole.

She definitely doesn’t look like the fragile, afraid to crack a smile actor that she is in Big Little Lies or anything else that she does contemporaneously. There’s an unfortunate focus on her looks that detracts from her meagre or multitudinous acting skills, and I’m probably contributing to it here yet again. Suffice to say they really make her look haggard here, to good effect.

When the film opens Detective Erin Bell (Kidman) wakes up, bleary eyed and crusty, in her car. She never sleeps in a bed, at least in the present (there are a lot of flashbacks in this flick). She does not just look, act and speak like she’s hungover: she acts like she’s at death’s door. A body is found at the LA aqueduct, with three distinctive tattooed marks on the back of his neck. The cops actually there doing their jobs are disgusted by Bell’s presence, a theme which is carried on throughout the film: People are either horrified, surprised or disgusted when she turns up. She tells the investigating cops that she knows who killed the victim.

Back at her office, her actual co-workers are also surprised that she’s turned up, and also annoyed. We sense that no-one really likes being around her or listening to her or looking at her. The world is so unfair. Most of this flick’s action, or activities occur in bright, debilitating daylight, as if to show how horrible daytime is to both vampires and alcoholics.

They keep implying that Bell is a drunk, and she looks like a drunk, but they rarely, if ever, show her actually drinking (just spilling drinks). That being said I think it’s strongly implied that she’s sculling drinks when we’re not watching, because otherwise she just keeps spilling everything and falling over all over the place.

We have seen this kind of role thousands of times in thousands of cop dramas and movies. When I say thousands, it’s probably an underestimate. It’s literally the backbone, the underpinning, the essence of the crime genre. Usually it’s meant to run parallel to some trauma they (the main character, cop, detective, 7/11 cashier) experienced in the past, something bad that happened to them, someone they care about, or a crime too awful to contemplate which they nevertheless bring up constantly. Plenty of times it’s just something they do because people used to associate it with being tough, being hard, being able to do the job others can’t, and yet being as tough as the villains they chase.

Destroyer wants to take it further, wants us to be as disgusted with Bell as she is throughout her investigation, but the result is pretty much meant to be the same. As in, Detective Bell wants to track down the person responsible for killing her undercover partner back in the 1990s, the Destroyer of the title, the one that got away. To get to this bastard, Silas (Toby Kebbell), she has to visit all the members of the crew that she was undercover with, who were also part of the fatefully robbery that destroyed everyone’s life.

But that’s not actually what’s going on. The person responsible for destroying everyone and everything isn’t necessarily this crime lord gang leader Silas, who isn’t that much more awful than any of the people Bell deals with, or, in fact, Bell herself. He is at first given this mythical aura, and in one of the flashbacks he indicates how little he cares about other people’s lives, but he’s not all that.

He’s not the Destroyer. I don’t really know specifically that anyone is the destroyer (unless it’s actually the detective, and her absolute determination to find and murder Silas). Maybe the destroyer is guilt, maybe it’s Time itself which destroys everything eventually.

Of the many people that Bell spends time with, the most awful scenes are between herself and her sixteen-year-old daughter Shelby (Jade Pettyjohn) who has nothing but loathing in her eyes for her mother. They keep having these terrible scenes in dinky restaurants but they never eat or even order food; they just tear strips off of Bell. Shelby, despite being a kid, has this truly awful boyfriend, the kind in movies that a girl gets specifically because she hates her parents. That stuff is pretty hard to watch.

To be honest, most of it is hard to watch. It has a very episodic structure, seeming to progress in an A to B to C type manner, with a brutal bank robbery in between, and yet in scene after scene Bell gets more and more physically abused and damaged, almost beyond what’s already happened to her over the last two decades.

The few times that she sleeps in the present, it’s either upright in her car, or passed out on the floor after another beating. There will be no comforts for the wicked, no rest on the road to ruination.

Whenever she reconnects with people from the past on the road to Silas, it’s almost comical in terms of how much Crime Does Not Pay. Everyone she knew back in the day is even worse off now than they were back then, with nothing having gotten easier, no-one living anything close to a not-awful life. And yet little of that has anything to do with Bell, so we’re meant to assume they were damned from the start, perhaps or even before they were born.

The reality is, though, someone at some point did make a choice, and they cannot stop believing that those decisions, that fatal yes to a devil’s bargain is what damned everyone else.

The film takes a certain turn, at a certain point. We begin to realise the real meaning of certain earlier scenes, as we realise that Bell is not the victim, but a protagonist in what happened, explaining perhaps why she clutches so tightly to this destroyed version of herself that she blames for everything that happened, even as she sort of tries to apologise to the few undestroyed people in her life, though she doesn’t really make excuses for her awfulness. And yet the talismanic importance of killing Silas never wavers, as if, finally, that will make everything worthwhile.

And then there’s even a greater revelation to observe – that, chronologically speaking, things have not been happening in the order that we thought in the present, even if the past cannot be changed. That took me a while to wrap my head around, I have to admit, but when it clicked into place, I nodded my head, slightly embarrassed at not having worked it out sooner. Ah, so that’s what actually happened, and when.

Is Nicole good in this role? I think she is. It’s easy to do this kind of role badly, and almost every actor at some stage does so. One of the worst things I’ve ever seen Julianne Moore ever do in her career was a role like this in a terrible flick called Freedomland. That is not a recommendation to check it out. It is surreally bad, but worst of all is her performance. I mention that because even accomplished actors of great skill and tremendous ability can fuck up playing a fuck up. I’ve even seen performances where actual famous reformed drug addicts do a poor job of portraying addiction or recovery, and that’s quite an accomplishment.

You can argue that most of the work is done by the hair and make-up people, but Kidman has been capable of tremendous work with both her physicality in the past and her voice, and she does tremendous work here. There’s a bone weariness to her physical performance that is both compelling and off-putting. And those eyes, those monstrous burning eyes, they’ll burn their way into your soul and remind you of your worst hangovers.

There are some bits of the flick that don’t completely work (or felt a bit sloppy, like the bank robbery set piece aftermath), and others that remain a tiny bit half-baked. And while I’m not the biggest fan of the crime / detective genre, having burned out on it decades ago, and still not saying anything like this is a complete reinvention or subversion or reinvention or anything. It’s not. It’s standard, but more so, if that makes any sense. The clichés of the genre, the parts that are most familiar, in some scenes they lean into them, almost to an extraordinary degree, just to up the ugliness, just to linger where in other flicks they’d fly past it.

I have to admit I have a certain sympathy for the irredeemable, the unsuccessful and the unloved, and this film, Destroyer qualifies on all grounds.

--
“Thou seest me as Time who kills, Time who brings all to doom, the slayer Time, ancient of days, come hither to consume; Excepting thee, of all these hosts of hostile chiefs arrayed there shines, not one shall leave alive the battlefield.” - Destroyer, or maybe the Bhagavad Gita