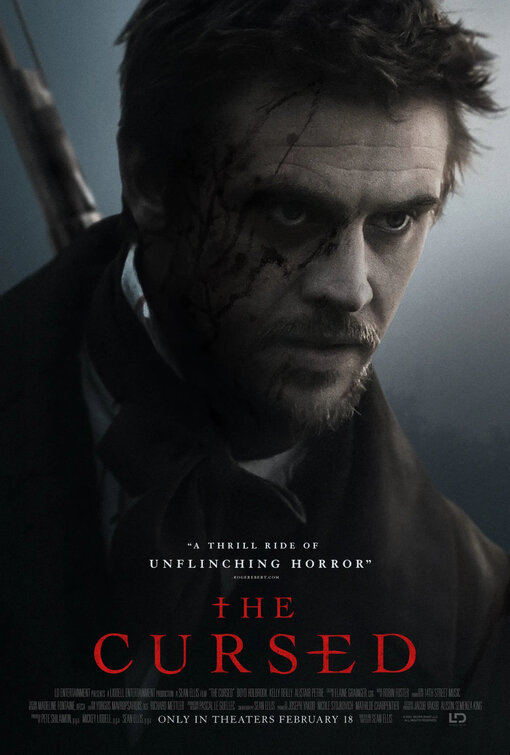 The audience could be the ones cursed by watching this

When this was initially going to come out, probably pre-covid, it was going to be called Eight for Silver. When it played festivals and such it was still called that. But then someone had the brainstorm, the lightbulb moment, the epiphany, and thought "fuck that, that’s too complicated; let's just call it The Cursed".

I think they could have gone one better and called it "How's that Curse I Cursed You With, Cursedy?"

I have lines when it comes to horror flicks, that I am uncomfortable about when they get crossed. It's important to have boundaries, I feel. And while I am generally okay with all sorts of damage and dismemberment, I'm not at all comfortable with having kids as protagonists upon whom carnage is visited. Sure, kids are threatened all the time in action flicks and other horror flicks.

Rarely do they make good on that threat. I think that's partly why I felt a bit aggrieved watching this flick, because they "broke" the social contract of horror flicks that it's okay to put them in peril, but not to actually follow through.

Another of this flick's crimes is that a central part of its story depends on a massacre of a Roma clan, who have the temerity to be on some land that some landlord jerk believes is his. Of course, beyond the supernatural, it is right and proper to make landgrabbing murderers the true villains in anything, whether it's a film or a documentary, but haven't the Roma suffered enough? Such massacres happened for centuries prior to the main "last" time they were slaughtered en masse by the Nazis, but using such a scene - for mass entertainment - worries me a bit, especially with the rise in nationalism / fascism worldwide lately.

Just this week in Britain the Tories brought in legislation targeting the travelers / Roma communities, so can we stop giving them persecution ideas?

Not that I think a fuckwit of Boris Johnstonian proportions would have the time to sit through a deftly-made horror flick like this one.

Even though everyone except the so-called “gypsies” speaks in English and they’re all English (or in the lead’s case, American, I think this is set in France. No-one speaks French, though, which is a relief.

There is a strange framing device, in that the beginning of the film is set in World War I, a guy gets shot going over the top, and they fish three bullets out of him.

One of the bullets is silver. Ooo, spooky!

It then jumps back thirty five years into the past presumably to explain how this chap came to have a silver bullet lodged inside him.

Okay but I don’t remember asking.

A bunch of landed gentry jerks including the bishop get together and wonder aloud what’s to be done with a group of gypsies who’ve recently arrived and set up camp, saying they have an old entitlement to the land. The elders, the loudest and jerkiest of which is Seamus Laurent (Alistair Petrie) decides even if they are in the right, they should die because…

The slaughter is most terrible, utterly awful, but one of the Roma tells them they will be cursed and lose everything they hold dear. She says it in Romanian, though, so they don’t understand her, and kill her anyway by burying her alive.

To her husband they do even more terrible things, and crucify as some kind of gypsy Jesus scarecrow, and at his feet they bury these silver fangs which seem to be very important to these people.

It’s almost like they know they’re setting in motion something that will keep the rest of the film’s plot clicking along.

People start dying soon (I mean white people), and their kids too. That’s extra bad. A pathologist (Boyd Holbrook) who is calm of demeanor and has seen some bad, weird shit happen in the past, is engaged to find out what’s killing the people of this awful place.

The cinematography is exquisite, and it’s exactly the kind of stuff I love: gloomy shots of bare trees; miserable scenes of cold fog everywhere, moors and forests that look like people shouldn’t exist other than as food.

As to the monstrous / supernatural stuff that’s happening, the flick has its cake and eats it too by making it so there’s almost like a mystical explanation for what’s going on, and a scientific, or more accurately pseudo-scientific reason for what’s happening. The Roma definitely did do something that would somehow get revenge on these people, but there’s some kind of mundane, practical way that it can be undone.

If it sounds vaguely similar to other flicks like Sleepy Hollow or Brotherhood of the Wolf, let me disappoint you right now by letting you know it’s nothing like those flicks, which were highly enjoyable, extremely camp (at least with Sleepy Hollow) and more comedic / action.

This is dour, grim and really a flick about how brutalising minorities only in this instance leads to repercussions for brutish landowners. In real life they get statues made to honour them, and criticising them is seen as being unpatriotic.

The character of the pathologist, called McBride, is like the more educated city person amongst the superstitious hillbillies, but in a turn up for the books, he’s the one that understands that what’s going on is not just an angry wolf chomping on people. He is cool but polite with everyone, and only ever raises his voice at the end.

By some strange non-coincidence, he’s been trying to find out what happened to the gypsies as well.

What is attacking people is too creepy and too stupid to explain. It may be like a reinterpretation of the werewolf myth, but it’s not really a wolf, it’s not transforming at night, and there are tentacles and other ugly things going on.

I would be lying if I said it was an enjoyable film, but it is a very handsome one, a very good looking one I wouldn’t kick off my streaming service in the harsh light of morning. Too many people, even the competent lead, do things too dumb to ignore, and the only reason they do these things is to delay the inevitable for a tad longer, to build up to the big, dumb finish.

One of my favourite British redheaded actresses, being Kelly Reilly, as the mother of one of the afflicted children, is in this, but her role is mostly thankless until almost the very end, where she gets to do some cool stuff (before totally fucking things up in an almost unforgivable way right at the end, which results in, I think, about a thousand people dying). What kids there are in this flick don’t get the chance to show much personality, they’re just there to die, and that’s icky.

And don’t get me started on the magnitude of the shrug that I gave right at the end, when the framing device of getting back to the contemporary “present” during the Great War, and how little it added to everything or anything.

Holbrook is solid, the cinematography is solid, and even better: no sequels.

--
“We will all pay for the sins made by our elders” – sounds like an allegory about climate change, doesn’t it - The Cursed