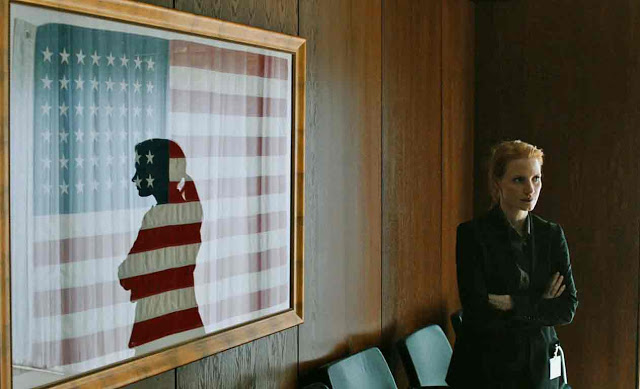 Fear the flag, sure, but fear the redhead more

Torture is awesome! Who knew?!?

Obviously it’s not as wonderful to the people it happens to, but, for the rest of us, it works beautifully. It’s effective. It’s necessary. It’s entertaining. It’s awesome.

Zero Dark Thirty is less about the hunting down of Bin Laden like the dog that he was, than it is about how one woman’s, and the CIA’s, determination to do anything including torture to get him (and her capacity for overacting) are the only reasons they ever found the fucker.

First, we have to endure a lengthy justification for the torture, in the form of audio recordings of soon-to-be victims of the September 11 terrorist attacks. Talk about moral blackmail. The film is practically daring you to disagree that any actions taken by the US and its allies after that dread day were so utterly justifiable that you deserve to be shot out of a cannon if you think otherwise.

We meet Maya (Jessica Chastain) as she watches a torture session, with rough justice being meted out by some other CIA guy (Australia’s Own Jason Clarke). He’s really good at his work, but he doesn’t love doing it. We get the clear impression that he’s not a sadist, that he doesn’t “like” what he’s doing, but he sees the sadly necessary utility of it. Poor diddums.

He’s so good at it, though. These Al-Qaeda shmucks don’t really stand a chance against all the beatings, water-boardings, genital mockings and uses of small boxes for accommodation.

Is it torture? Is it ever. Wherefore the quibbling over the difference between torture and ‘enhanced interrogation’? Sure, our red-headed protagonist acts like she’s not a fan of these procedures, but her determination to find a link to OBL cannot be diluted or assuaged. I’m surprised they don’t have a scene where she twists a guy’s nuts in her steely grip herself, instead of delegating. Sometimes these things require a personal touch.

These scenes are hard to watch, for me. It’s not because I put myself into the positions of either the torturer or the tortured, or empathise with their struggles with conscience or with the trauma that’s dissolving their psyches. I watch stuff like this and wonder what it says about a nation and its allies that they condone and justify it, grudgingly or otherwise.

My main objection would seem to be; isn’t it the kind of thing the dreaded and hated Other would seem to be most keen on, and not Us? If We are doing stuff as ugly and dehumanising as this existential, abstract enemy seems to do without qualms, where’s the moral superiority? Where’s the goodness, the humanity, the acknowledgement that that ends don’t justify means? I thought we’d left this utilitarian shit back in the 19th Century, along with the corsets, cholera and leeches.

To the flick’s credit it at least acknowledges that all that’s happening is wrong. It shows us so-called ‘black sites’ and tells us they’re black sites. It doesn’t explain what a black site is to an uninformed viewer, but, hell, it’s not hard to figure out.

They’re conducting their gentle fact finding missions in places and in countries where torture is commonplace and not frowned upon, in fact it’s celebrated and applauded. It gives them the plausible deniability to say that they’re not breaking American laws on American soil.

Just, you know, they’re also saying fuck you Geneva Convention and all that.

They also make free mention of the fact that, with Obama coming to power in 2009, the CIA goons are nervous about facing courts or firing squads for their actions, so they start walking and talking a different walk.

Put simplistically, if what they were doing was “right”, they wouldn’t have been so jumpy about facing the music.

The other cover the filmmakers, including Bigelow, are saying about the film is that this is dramatic re-enactment, this is what happened, this is history. You can’t judge them for reporting the facts of what happened, ma’am. And if it just looks like torturing a guy is how they found the crucial links to OBL, well, they’re not saying it’s right, just that it worked.

The vast majority of the flick is talking, arguments, a few bombings, and so much entré and appetiser before the main course of the Seal Team 6 raid on OBL’s compound. Which is the more important part of the flick? Clearly the technical / conversational main section. My biggest problem with the film is not the ethical issues, nor the endless talking, or the reduction of complexity to bite-size chunks. That all hangs together pretty well. The problem for me is that Maya is either not a believable character, or that Jessica Chastain overacts the part completely and utterly in such a way that I didn’t buy her character, her actions, her reactions or her behaviour at all. I tend to think it’s the acting, which pains me, since I’ve liked Jessica Chastain in almost everything I’ve seen her in, and think she’s a major talent, and I’m not just saying that because she’s a beautiful redhead.

There’s a thin line between dedicated and obsessed, perhaps, but the flick doesn’t really convince me that her behaviour would fly in such a rarefied environment. I found almost everything else believable, as in, scenes where CIA and Administration high-ups are debating the pros and cons of launching the strike on the Abbottabad compound, using percentages of likelihood as justification for knocking it back. That looked and sounded plausible. The most convincing evidence the analysts are using as proof of OBL’s location is the absence of proof, which is hard to convince someone with who’s reasonably sceptical already. It’s the equivalent of trying to convince a jury of a specific person’s guilt for murder by proving that every single other person in the world has an alibi.

Maya, however, acts in a lot of circumstances like the lead character from what is a trashy but enjoyable tv program, being Homeland. I’d argue that there’s a different standard in a show that’s a complete fantasy about what a ‘genius’ bipolar CIA agent can get away with, versus a serious drama claiming to replicate the events leading up to OBL’s righteous extermination. Which actually happened.

Any of these high-ups would have had her committed, fired, sent to Antarctica, any number of things. At no stage did I ever understand that she was the only person in the CIA committed or intensely invested enough to see it through, to find him. At a guess I would think that pretty much every single one of the CIA’s members would have given their left nuts or ovaries to be the one that found that fucker. The result, perversely, doesn’t vindicate her, at least as it plays out here. It actually makes her seem like she was just lucky, and that if she hadn’t been acting like such a mentally unhinged lunatic, maybe they all would have been able to find him sooner because they would have taken her more seriously sooner too.

Her character has no depth, just affectations. She doesn’t have motivations, just intense bursts of overacting that made me feel like I was watching Al Pacino at the end of Scent of a Woman. She’s the glaring flaw in an otherwise strong film.

The second section is not an afterthought by any description, and Bigelow directs it with fierce clarity and propulsive momentum. It’s wrong to say it, but it’s exciting, it’s thrilling, it’s shocking and it’s utterly compelling when they’re actually doing it. It also doesn’t depend on Jessica Chastain’s presence.

Joel Edgerton and Callan Mulvey, Australia’s Own etc etc, are two of the guys in Seal Team 6. There are other guys too, but, as we would expect, these incredible warriors are bearded but almost invisible, without personality, without pasts. They were tools, of vengeance, of retribution, and they carried out their God-given task with ruthless efficiency, and they got the goddamn job down. There’s no soft-soaping with the operation they carried out, the details are ugly but understandable, and they’re presented in a fashion that makes it feel like we’re watching it and experiencing it in real time. Of course they do a lot of first-person-shooter perspective, making it feel like you’re stalking the halls yourself, but it’s also the view various high-ups including the White House were watching as it happened at the time.

Seeing Callan Mulvey, a guy I remember seeing on the telly as far back as Heartbreak High, pull the trigger on the bastard himself was a pretty amazing moment.

I don’t know how accurate it is and I don’t care, it looked great and it does the occasion justice, unlike the earlier parts of the film perhaps, which are thin on justice and long on posturing. It’s safe to say that if you liked Hurt Locker, you might like the last section (of this very long arsed film) heaps and heaps. If you like watching people being tortured, you’ll probably like the first third. If you like office arguments and Jennifer Ehle (who once played my favourite rendition of Elizabeth Bennett in the Pride and Prejudice mini-series) pretending to be an American, then you’ll love the middle hour, you’ll just adore the shit out of it.

It’s a lot of film for your money, though, and the central character does not make those nearly three hours pass any easier, I have to say. Be wary but be prepared.

7 times Joel Edgerton’s character’s remark to a certain character after taking a certain shot of “Do you realise what you’ve just done?” seemed a trifle unnecessary out of 10

--
“Who are you?”
-“I'm the motherfucker that found this place, sir.” - don’t mind me, I’m just groaning to death over here – Zero Dark Thirty