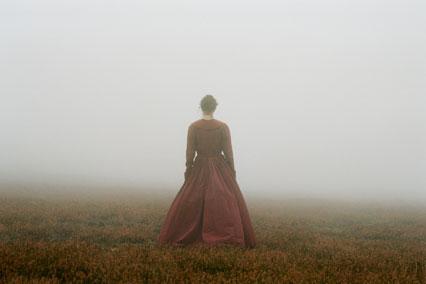 The Heights, they be a-wuthering. The moors, too.

There are probably a million versions of this story, and yet this is the first I’ve watched the whole way through. I know there’s versions with chronic overactors like Laurence Olivier and Ralph Fiennes playing the smouldering Heathcliff, but none of them have ever been compelling enough to compel me to watch them.

I don’t have a good reason as to why. As a pseudo-intellectual pretentious wanker (First Class) who also happens to make millions on the side from writing film reviews read by scores of people, it’s almost a negligent crime to not have read and seen at least fifteen versions of Wuthering Heights by now. I should really turn in my union card before the Goth Union comes after me.

Still, I’ve heard the Kate Bush song hundreds of times, and the even funnier Mr Floppy parody version of Kate Bush’s song, so I thought I’d totally be up on all the details upon finally watching a Wuthering Heights film.

Jeez Louise! I never knew Emily Bronte had such a dirty mouth! They should dig her up and wash her fingertips out with soap for all the shocking, shocking language on aural display here.

There was a moment while watching the film where I kind of clicked that maybe this film had varied somewhat from the established text, when Heathcliff screams at a bunch of toffy aristocrats, in a heavy Yorkshire accent, “Fook all you, you pack o’ koontz”. You thought the biggest variation was having Heathcliff played by a black actor, well, the script seems to be a tad more radical than that particular casting decision.

I never realised how bleak this story was, how vicious and cruel. You hear or read the words “doomed love story” and it conjures images of lovers star-crossed though they be eventually submitting to a cruel fate that conspires to only allow them a brief time of happiness before crushing them utterly. Wuthering Heights doesn’t even have that “brief time of happiness”, it’s about love, but it’s all misery from beginning to end.

Set and shot as it is on the Yorkshire moors, the copious shots of natural scenery seem to be saying, over and over again, that this is not a place for gentle human feeling, or even for humans. Apart from the constant misery of their lives, death permeates everything. These are the “solitary, poor, nasty, brutish, and short” lives that Thomas Hobbes spoke of when man is in a state of nature, lived shortly and quite brutally, because they live in a place that does not want them.

The moors don’t want them, nature doesn’t want them, and Heathcliff’s adoptive family don’t want him. An act of kindness sees the patriarch of a family pick up an urchin on the streets of Liverpool as the essence of Christian charity. He takes this young lad and brings him to the gloomiest, muddiest, drippiest bit of England, being Northern Yorkshire. The boy, Heathcliff (Solomon Glave), is insulted and spat upon by the man’s children, but, since his back is covered in scars from whipping, he seems to know the quality of forbearance.

His times of misery and bitterness are not at an end, though, even here. The man, Earnshaw (Paul Hilton) has various children, and one of them, being the skin-headed Hindley (Lee Shaw), delights in torturing Heathcliff, and forcing him to do the worst jobs on the farm.

Amidst all this brutishness, is the gentle affection of Earnshaw’s daughter Catherine (Shannon Beer), whose very presence brings comfort to the poor lost boy. They are just kids, here (I’m not sure what their ages are meant to be in the story, though they seem to be in their mid-teens at least). They do not bond through conversation. Heathcliff is not much of a conversationalist. He falls in love with Catherine, powerfully and completely, because of her kindness.

They live in squalor, but that does not trouble either of them. She collects dead things (of which, no doubt, there are a plenitude surrounding the farm, nature being the killer that she is, and also the feathers of birds long gone. She takes him riding on her horse, and it is impossible to see it in any other terms other than the budding sexuality growing in both of them. She takes him to her favourite spot, which is, impossibly, the bleakest spot in all of Yorkshire, for sure. It’s a rocky outcrop, probably the coldest and windiest place for a hundred miles in any direction, and she bids him to lean out over the edge. It’s so desolate and bleak and beautiful, like the love between them.

With so much death around, well, it becomes a question of who’s next rather than when. When Heathcliff’s hated nemesis Hindley becomes lord of the manor, Heathcliff’s lot in life becomes even worse, as he is reduced to the status of an animal, quite literally, and the beatings and whippings continue. Other circumstances contrive to alert Catherine to the fact that there are other people in the world, including other boys. But Heathcliff only has eyes, for Cathy.

His looks of longing are so aching, so profoundly monomaniacal, that you know that even were this not Wuthering Heights, that no good will come from this terrible love. Catherine has no doubt of Heathcliff’s devotion, but it doesn’t stop her, like with any teenager, experimenting with cruelty. A lifetime of rough treatment hasn’t exactly made Heathcliff a gentle soul either. His capacity for cruelty is just getting started.

That early bit of the film, before Heathcliff is driven away, takes an hour, and then the second hour or so is devoted to Heath and Cath as adults. Heathcliff (now played by James Howson) and Catherine (Kaya Scodelario) are not the confused kids in love they once were. When Heath arrives back, he’s got a serious roll of money, and is well dressed, and his afro is the length and style of someone confident enough to carry it off.

Catherine has married into a respectable family, with a weak-seeming husband (James Northcote) and no idea that Heath is even more disturbed and determined to be with her than before. Once they first speak, he tells her his plan lo these many years was to come back to the moors, get revenge on Hindley, see her beautiful face once more, and then kill himself. There’s no “how ya been, whatcha been up to?” or any of that. It’s just smouldering, burning-yearning glances, and a lot of cruel behaviour that these days we flat out call ‘stalking’.
No good will come from any of this, but we knew it from the start, since the film starts with Heathcliff in their old room at Wuthering Heights, inspecting the etched-in drawings on the timber of the walls, with their names scratched passionately into the fabric of their horrible home, yet he is crying, alone, bloodied, and hurling himself into the walls.

I can’t really compare this flick to any of the other versions of it, since I’ve never seen any of the other ones, but I can guess at least that this is significantly different. This isn’t a flick you watch for the dialogue. It’s all in the nature imagery, in glances, in the stumbling of boots in mud, in the oppressive wind, and in the invasive and spastic (sometimes) camerawork. Some scenes are filmed so close-up that it’s quite off-putting, even on the big screen (or at least as big as the medium-sized screens of the smaller theatres at Cinema Nova), and scenes where the kids run down a hill have the most epileptic-inducing imagery I’ve ever seen, and I’ve seen a shitload of Japanese cartoons.

This film leaves out a lot of the plot of the book, especially any of the elements that would have made it any lighter, keep it spare, sparse and frightening. There’s no comfort for us in this story, and maybe that’s the best approach. Maybe we don’t deserve it, maybe this story needs to be as bleak as a Siberian winter.

The performances of the kids playing the leads are phenomenal and messy, and there’s nothing neat, prim or proper about any of it. As the adults, adult Heath is cruel and feral, and perfect, but I couldn’t help but feel that the adult Catherine didn’t seem enough like her child counterpart, though I guess it’s a crucial part of the story that she transforms into a genteel member of the landed gentry rather than remaining the rough and tumble lass of the moors. She does get the greatest scene in the flick, when she brings adult Heath to the rocky outcrop again, now that it’s too late, and says, with genuine disbelief, “How could you leave this?”, which she of course follows with “How could you leave me?”, just before knocking him down and pressing his head down with her boot?

His head with her boot? These cruel bastards. My jaw hit the floor, even when I knew it was coming. I couldn’t get over how monstrous they were, how vengeful their love made them.

There’s nothing sophisticated or bourgeois about the misery, the longing in this flick. It’s harshly beautiful and completely unsentimental; the savagery of the emotions makes melancholy difficult and identification with the leads even harder. Any melodrama is leached away by the constant icy nature scenes, reminding us that nature waits only for us to die, to take us into its cold embrace, the way the frozen heather and gorse keeps embracing Heathcliff and Catherine every time they lie down on the welcoming ground.

It’s hard to watch, but it’s a definite achievement. It pares down the romantic frippery to the brutal essence, and it’s filmed to match. It’s definitely not going to be to most people’s taste, but I would have thought people would want something that was free of the taint of yer Jane Austens or yer nice little impoverished daughters patiently waiting for someone to marry them off, just for once. None of that stuff is here.

This isn’t quite on the level of the Jane Eyre adaptation from earlier this year, with Mia Wasikowska and Michael Fassbinder, just to increase the competition between the two Bronte sisters, but I’m still glad and a bit astounded by having watched it.

--
“How could you not think of me all this time?” – how could he think of anything but you all this time, Cathy” – Wuthering Heights