Way of the Gun, The 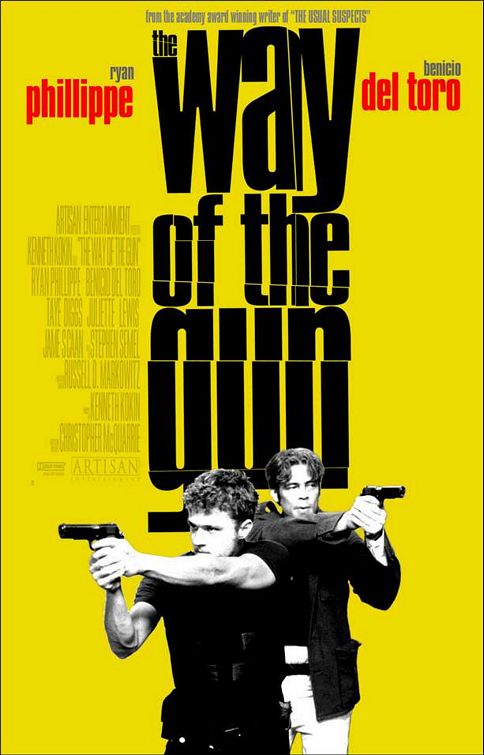 The way of all things in the States is gun-related

The Hollywood variation on the American Dream, which is the regular American Dream anyway, is that a screenwriter, actor or director previously subsisting on tips from being waiters and valets to the bourgeoisie can get the big break and become another star in the firmament. Glowing bright, suspended above the masses; all they need is that one big break.

The problem is, there are no guarantees in this or any other life. The big break can just as easily catapult you back into obscurity after you crash and burn.

Christopher McQuarrie’s claim to fame was that he scripted The Usual Suspects, which propelled director Bryan Singer into the stratosphere, got Kevin Spacey an Oscar for his role as Verbal Kint, and gave audiences one of their favourite overly convoluted crime movies of 1995. It also garnered an Oscar for McQuarrie as well. But then again, who really gives a good goddamn about Oscars in general and Oscars for Best Original Screenplay anyway. I bet you don’t, don’t pretend otherwise, I won’t believe you.

Someone must have thought McQuarrie deserved to get paid as well, so despite having no experience as a director, he was given the money and the freedom to try to repeat the magic of Suspects. Did it work?

Well, ask yourself: Have I heard of Way of the Gun? If you never saw it at the cinema, and never saw it on DVD, tv or cable, and in fact never heard of it until you saw this review, then it probably wasn’t as successful as Suspects, to put it mildly.

I saw this in the cinema oh so long ago. I was the only one in the theatre, and I seem to recall the movie disappeared from the cinemas the same week (when it opened) I saw it. In fact, the ticket I purchased to watch it, any posters or references to the flicks also disappeared, and the staff in the cinema pretended the movie never existed…

Perhaps not, but let’s just say that the film was a bit of a box office failure, which is why the film routinely languishes in the discount bargain bins at the joint where I buy DVDs from. After having thought about picking it up and rejecting the idea at least a thousand times, last week I relented, and thus a review has been expelled, extruded and expectorated from my brain through the fingers to this hallowed website. So, you know, enjoy.

The Way of the Gun is a really, really good crime flick. It deliberately approximates a 70s aesthetic and mindset, and conducts itself with absolute seriousness. It tries to be anything but disposable. It tries to be memorable at every stage. It approaches the world of the professional criminal with respect but wariness: these people may be rational and logical agents, but they are absolutely ruthless, and capable of much in the service of their ambitions.

Our two main characters never tell us their real names. All they give us, through Ryan Phillipe’s voiceover, is pseudonyms, taken from Butch Cassidy and the Sundance Kid. They are not the kind of career criminals who dress like pimps and drive around in Cadillacs, though they seem quite cool with what they do.

As people who wandered off the conformist path of life, Parker (Phillipe) and Longbaugh (Benicio Del Toro) eke out what looks like a subsistence existence wandering from opportunities and scams to looking for the perfect score.

We are introduced to them and their dealings with the world when they deliberately provoke a fight with a line of morons waiting to get into a club. When threatened with violence, they decide to punch the women in the face instead of the guys. These guys are working to a different timetable, different set of standards.

They hear, during their travels, of a wealthy couple using another woman, Robin (Juliette Lewis) as a surrogate for their child. The wife in the couple doesn’t use the surrogate because she can’t conceive: they use her because she doesn’t want to lose her figure. And the older man in the couple, Mr Chidduck (Scott Wilson), just wants a child, and is willing to pay a millions bucks to rent out her womb.

Our two main reprobates decide the pregnant chick represents too tempting a target, and try to figure out a way to kidnap her. Yes, our main characters are kidnappers and unrepentant criminals. Now perhaps you can see why a film with such a prestigious pedigree died at the box office.

Parker and Longbaugh grab Robin, who is heavily pregnant. The bodyguards assigned to protect her (Nicky Katt and Taye Diggs) want the kidnapper’s blood, and have an agenda of their own. Mr Chidduck, who is connected to the mob, wants his baby back at any cost, and risks his own life by fronting mob money for the transaction. Chidduck appoints his long-time henchman, Joe Sarno (James Caan) to facilitate and adjudicate the process. Facilitate and adjudicate are euphemisms here as they are in management. His primary skills lie in negotiation first, and enforced downsizing later.

Like Parker and Longbaugh, Sarno is a professional criminal with the experience and longevity to indicate how good he is at what he does. As he points out to one of the many characters, the one assumption someone should make about him at his age is that he is a survivor, and very good at what he does. He, too, has a personal stake in the outcome of the kidnapping, which doesn’t become apparent until the end.

Along with them, there are plenty of other characters as well, all plotting their own plots and tangling their own weavings. They all tend to speak in a very noir-ish way which would please someone like Raymond Chandler but annoy most contemporary audiences who want monosyllabic catchphrases and punchlines in place of dialogue. Because there isn’t a limit to the amount of times “I’m too old for this shit”, “I’ve got a bad feeling about this”, or “He’ll be back” is entertaining, is there.

McQuarrie, who prides himself on his dialogue comes up with some real gems here, that sound better delivered than they do on paper. Lines like “Fifteen million dollars is not money, it's a motive with a universal adaptor on it” or “I promise you a day of reckoning you won't live long enough to never forget” work a treat, at least for me. Even in a film like this, especially in a film like this, that’s what I’m after; it’s what I’m looking for. It sure as shit isn’t just for car chases and shootouts, since statistically speaking, I’ve seen tens of thousands of screen shootouts and such since the age of puberty.

And what an exciting and confusing time that was. Speaking of shootouts and car chases, McQuarrie really went out of his way to make this a different kind of non-cliché crime film. The gunfights are carefully crafted and specifically go out of their way to look sensible and to look nothing like what shootouts usually look like on the big screen.

These guys are meant to be professionals, almost like professional soldiers, who make a living through this kind of ‘work’ and the skills it requires. Their opponents are also intelligent and skilled professionals. So they do stuff that looks weird, but makes a strange kind of sense, and is refreshingly different if you’ve seen a bazillion crime/action flicks.

It has to go on record as having one of the most distinctive and slowest car chases in cinematic history. Even back in the silent days of cinema when the only car was the Model T Ford, they were faster than this. It’s odd but amusing.

The biggest problem the film must have had in finding an audience was exactly the list of things that make the film enjoyable for me: ruthless characters who don’t act like morons even when they admit they haven’t thought something through, two amoral characters who may be badass but who are monsters in their own right, not a sympathetic character in the whole bunch, complicated dialogue and even more complicated plotting, which kinda falls apart under examination, and a mood and aesthetic lifted wholesale from the 70s films of Sam Peckinpah. You know, the crazy guy who made The Wild Bunch, Butch Cassidy and the Sundance Kid, The Getaway and many other heartwarming family films.

McQuarrie must have thought audiences would have gone sick for it the way they did for Suspects, since they shared exactly the same elements, but the recipe didn’t work out the same way here. Maybe he wasn’t ready to take the reigns, since there are scenes, despite his obvious ability throughout the flick, that come across as poorly thought out and amateurishly shot. But overall he manages to get some great performances, especially from Juliette Lewis, who usually can’t act for shit, and James Caan, who dials it down and gives a tremendously low-key but ominous portrayal of an old dog in no rush to learn new tricks.

Del Toro and Phillipe are really good as two guys who work really well together as crims but, by the nature of their chosen career path, could never trust anyone enough, let alone each other, to be friends.

It’s got a clever script, but it’s light on laughs, and has a pretty grim feeling to it throughout. You don’t know who you want to survive, except maybe for Robin and the baby. It also doesn’t shy away from blood, and, even worse, doesn’t shy away from showing how hideous a cesarean section would be if performed in a dirty room in a Mexican brothel. Having seen one up close myself, I assure you I never want to see it ever again, in this film or any other.

It’s hard to argue that the film has been criminally maligned or ignored. It is what it is: a novel crime film. There’s no shortage of crime films out there, tens of thousands of them in fact, and this in truth deserved no more respect or adulation than the myriad of others. It’s not as entertaining as Usual Suspects, not even close, so no-one should have been surprised when it was buried.

At the very least it remains a diverting two hours for me, and remains true to its shitty itself until the very end.

--
“There's always free cheese in a mousetrap” – The Way of the Gun.