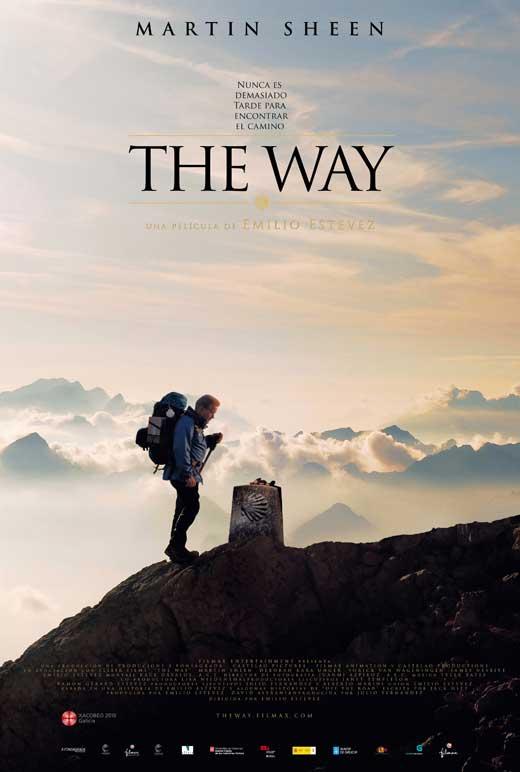 Move along, sir, there's no redemption for you here

Of all the people in the world available to direct films, you would think or hope that one of them wouldn't have to be Emilio Estevez, mega superstar of St Elmo's Fire and Young Guns fame. Estevez, one guesses, is somewhat forced to direct movies now because he's not inexplicably sought after like his drug addled brother Charlie Sheen, or as talented as his father Martin Sheen.

What better combination could there be than Estevez directing and Martin starring? Well, I guess they could have had Charlie playing a role too, maybe in the role as the lead female.

The Way is a movie about a father (Sheen) making a long pilgrimage to honour his son, who dies while on that same pilgrimage. It's not as complicated as it sounds. The father is a stodgy opthamologist who lives alone and plays golf solely to cover the fact that he has nothing else going on in his life. The only remaining family he has since his wife's death is his son Daniel (Estevez), the last contact with whom occurred when father was dropping son off at the airport. Son was all like "Dad, you should be totally out there living life and travelling and such" and the father is like "Buckle down, grow up, get a job you hate, work it for forty years, because that's what people do."

It's not an original dynamic, but in a flick like this, considering that in all sorts of stories like this, one of them has to die. They have to die after harsh words like that because then one of them can be left behind lamenting the fact that their last words to their loved one was something like "Get the shit out of your ears, dickhead, and get a job ya bum."

That's when you can really feel guilty. The son was off somewhere, but the dad didn't care. The son's constant travel and carefree ways brings nothing but misery to the father, but he's not going to have to worry about that anymore.

For reasons never explained, nor did they need to be, Daniel was off on a fairly well known pilgrimage that starts in France and ends in Spain that takes months to complete on foot. Well known to other people, I guess. I mean, I know I've done the pilgrimage at least a dozen times for sure, but perhaps the 'famous' Camino de Santiago de Compostela isn't that well known to others. It's also known as The Way of St James, hence the title. But maybe, just maybe, The Way also refers to "what is the best way to live?" or, "what is the best way to grieve for someone you loved but didn't like that much?"

Just after starting off, Daniel dies. I don't think it's much of a spoiler, since it happens in the first few minutes of the film, and it provides the entire motivation for the elder to set off on his own pilgrimage to honour his son.

At least I assume that's why he does it. He's something of a closed book to us as well as the other characters in the flick.

In essence, we get to watch Tom and a few other people walking across the Spanish countryside and bedding down in dormitories and dirt. Walking, lots of walking. This is like watching the three Lord of the Rings films compressed into one without the payoff of a ring being dropped into a volcano.

If you like watching people walking, this is probably the pinnacle of the artform. If you like road movies without the pesky involvement of cars, this could be perfect for you.

Otherwise, it could be just as tedious as you imagine.

Of his companions on the "camino", as they call the pilgrim's path, they range from cliched to contrived, and back again. Joost the Dutchman (Yorick van Wageningen) is big, burly and always smoking dope. Despite these red flags, he's actually quite a sweet character. The actor works hard to earn our 'like', because someone in this flick needed to be likeable, godsdamnit. The rest of them ain't going to float our boats.

Every now and then, Tom pours out some of his son's ashes at sacred sites and shrines along the way, but also sees Daniel along the path. I don't think we're meant to take it too literally, as in, I don't think his ghost is appearing imploring his father to take revenge against the French for his death. It's just meant to feel like he's travelling with his son along the trail for the one and only time in either of their lives.

It's the longest goodbye you can imagine, and is painful because of it. Painful in a good sense, we hoping in a healing sense. If this is Tom's way to grieve for his son, then why not let him do it this way? Who are you to judge, huh? I give up...

Tom is, rightly, very reluctant to engage with other people along the trail. He's content to plod at pace along the pathway, trying his darndest to ignore everything along the way. It is pretty idyllic countryside and rural agragrian areas that he's trudging through, which we get to enjoy. But not Tom. No, he's doing it at first almost as a rebuke to his son, as if to say, "See, I can do this shit too, and I don't appreciate it, like I said I wouldn't when we argued, so nuts to you and your traveller's ways." And he's determined not to be changed by the journey, or by his interactions with fellow travellers.

That's not a luxury anyone can afford, even on a journey as cliched as this one. I actually liked the fact that Tom seemed to have contempt for his companions for most of the time, because they appeared contemptible for much of the flick's length. One character in particular, the only female in their company, was especially terrible.

I don't have any particular animus towards Deborah Kara Unger, who was passable in plenty of roles in the past, but her character is terrible here. It doesn't help that all these obvious medical procedures she's taken to stave off natural aging have rendered her looking like an emaciated someone who survived a hideous car crash and fire only to look like death would have been preferable.

That was a terrible thing to say, I admit it, and I own it, but I won't delete it. Her character, an abrasive Canadian woman who smokes compulsively and is a survivor of domestic abuse makes no sense in this or any other flick, and I enjoyed nothing she did here. In a lesser flick, she probably would have been a love interest for Tom's character, and thankfully Emilio Estevez spared us that.

James Nesbitt also has a role as a pretentious travel writer, who's solid as always, but his only real purpose is to bear the brunt of Tom's drunken ire when Sheen, recalling his great drunk work in Apocalypse Now goes on a boozed up tirade that sees him going home in the back of a divvy van.

Sheen is strong in this as he is in nearly everything he does. It seems a bit cruel for a son to make his father walk all the way across Spain, but maybe Estevez wants his dad to lose some weight (as is Joost's character's motivation) and increase his cardio fitness. It'd surely do it for you. The Camino is 500 miles long. That's not something you do easily, although presumably they had vans and helicopters and such.

The person I feel worst for throughout all of this isn't any of the characters. It's someone I knew several years ago, who walked the Camino, all of it, and wrote a book (called Unholy Pilgrims) about it, that had all sorts of whacky characters and hijinks ensuing, whose book will never get a look in insofar as getting optioned for the film rights, all because of Estevez's movie here.

That's got to suck, Tom Trumble, but you never know, maybe someone will try to reboot this megahit in a couple of years.

I can see why this might be daunting for some. As for the religious aspects of the story, don't be afraid, my godless little heathens. At no point is there any real, dramatic insistence on the religious nature or aspect of the pilgrimage. If it's religious, it's religious in the West Coast American aspect of generic spirituality. Tom's not doing this for Jesus's forgiveness or to earn his way into the heavens: he's just doing this to honour his son, and perhaps understand him for the first time in his life.

As hokey, as eye-rolling as some of this might sound (and as much as I disliked the use of a fairly awful Alannis Morrissette song at a key point), it had some emotional heft to it. The best moments are the understated ones. It didn't resonate with me entirely, since the traveller stuff doesn't appeal at all, but it did move me. I can appreciate why Tom was on the journey far more so than any of the other characters, and that culminates in a beautiful ending for the character, and for me.

Sure, I'm cynical as fuck, but I've still got a heart. It's black and poisonous, but it still beats, every so often.